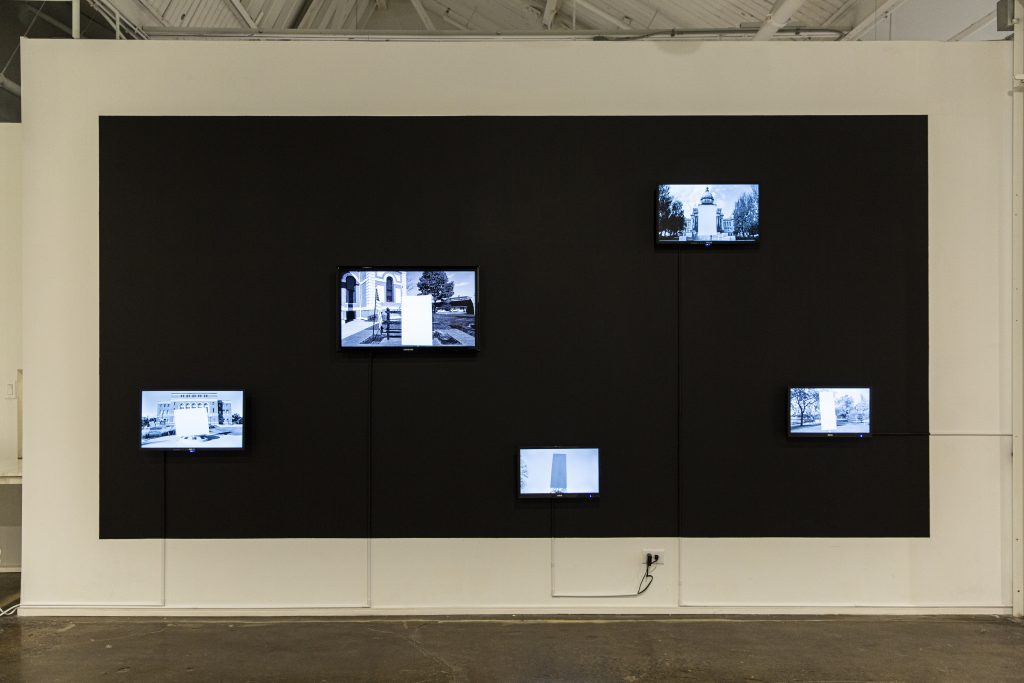 Like many exhibitions at Chicago Artists Coalition, “Tracing Faults” requires spending time with each piece and more context. You can always expect the artwork at CAC’s Hatch Residency exhibitions to include unexpected material. As this residency encourages experimentation, boundaries are refreshingly broken. Case in point: as I walked in, I was confronted with a wooden stage next to a dirt assemblage, an arcade game, an arrangement of monitors and buckets on the floor adjacent to photographs.

The most monumental piece, curated by HATCH curatorial resident Jeff Robinson, is Cass Davis’ “Backyard, Monolith,” a wooden, pulpit-like structure that directly faces compacted dirt mounted like a wall relief from floor to ceiling. Buried in this dirt are familiar Midwest objects, such as corn and a bicycle wheel, along with a Bible Belt classic: a picture of white Jesus holding a lamb. Encased in wooden frames, these earthen assemblages bring to mind a newly dug grave, with fresh soil that you can almost smell. A wooden guard post stands on the wooden structure between the viewer and the wall relief, creating a boundary, as if the objects within the dirt have a holy connotation that requires onlookers to keep their distance. One of the most interesting aspects of this piece is what it compels the viewer to do. Because it is so large, I was forced to find a better viewing point. I ventured around the wooden stage, wondering if I was allowed to stand on the piece itself. It took time to discover that I could walk onto the platform, but only after investigating the structure and considering its function and purpose in the exhibition. In this way, Davis’ piece gives us an opportunity to negotiate with these objects spatially, questioning what is to be touched, what is to be looked at, and what holds value to us personally versus culturally. Cleverly named “Backyard, Monolith,” the objects in Davis’ piece reflect our own backyard, meaning, the familiar and personal; the object of the rural and even suburban Midwest. Like a monolith, the piece sits upright, and like a landmark, invites observation, and therefore an implied value. 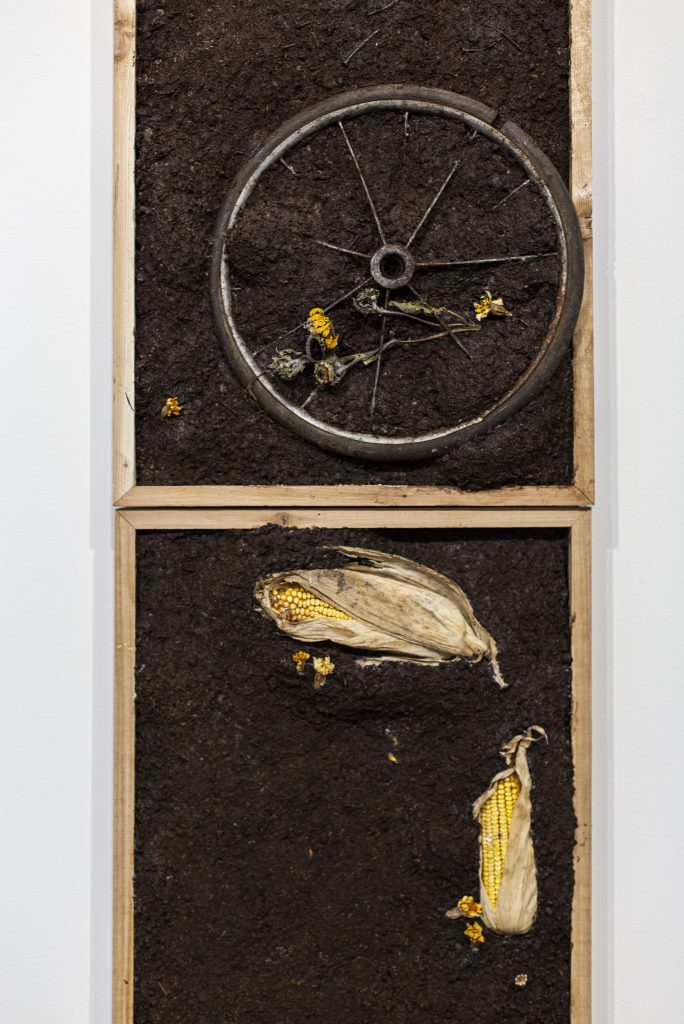 In conversation with Davis’ piece is Kelly Kristin Jones’ “Dodging Tool” series: an arrangement of monitors that show a political monument, each visually obstructed by a flat shape on a stick coming from offscreen. The movement of this dodging tool, which is shaken and moved up and down, is not unlike a picket sign used for protest, held by an activist marching offscreen. As in Davis’ “Backyard, Monolith,” Jones’ series challenges the value of these objects, questioning the significance of these monuments and what they stand for by envisioning their absence. Set in locations including in front of a government building and in a park, Jones reimagines history by erasing these monuments, with her dodging tool leaving nothing but a white shape, a blank slate that offers room for potential change and possibility.

Also on view are works by Mark Blanchard and kwabena foli. Blanchard’s piece, “11 km/s,” is a tabletop arcade in which the viewer can sit and attempt to play the game. I use the term “game” loosely, as the viewer is given no directions on how to play. In the work of foli, scenes of dancing in Chicago are digitally remixed with the traditional Zaouli dance of the Ivory Coast. The photographs landed flat compared to the thought-provoking pieces nearby. The most interesting elements were white, overturned buckets placed physically in front of each photo, which must reference the people we see on the street in Chicago who use buckets as makeshift drums. The viewer is again forced to walk around the bucket—to try and get closer to the photograph while contending with the object. Can we sit on it? How should it be used?

By skewing an object’s function, the artists in this exhibition push for a change in perspective, questioning and altering the value of objects like a wooden stage, a monument or a bucket. Although some of the pieces accomplish this more successfully than others, together, the artists compel a reimagining of commonplace objects and the value they are given. (Christina Nafziger)