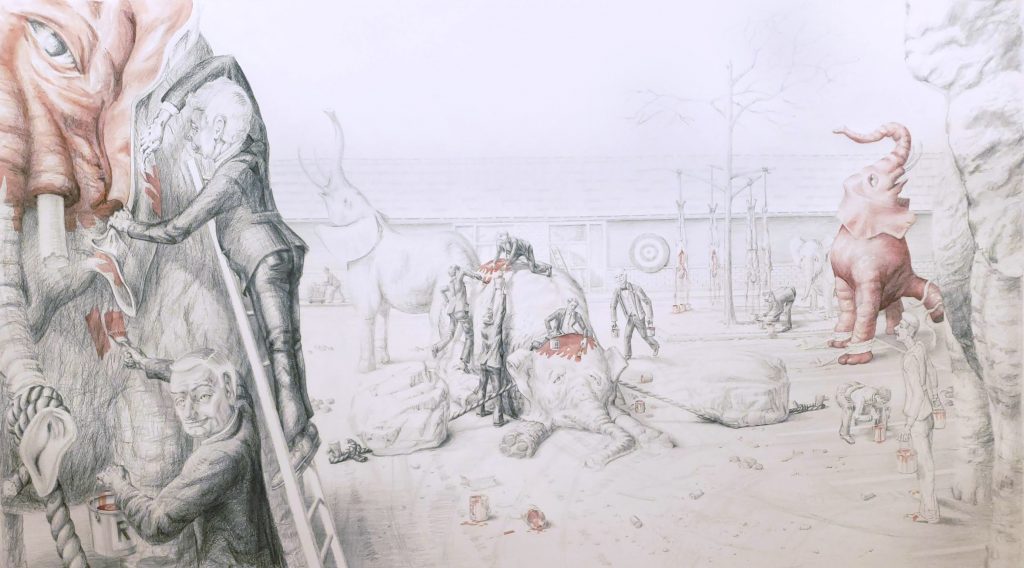 Tom Torluemke, “Painting the Elephants,” 2019, Graphite and watercolor on paper/Image: One After 909

America is a real hellhole––or that’s the message delivered in this exhibition of works on paper by four Chicago artists. Mental and social dysfunction take center stage. A similar theme was addressed in the works of three Chicago women shown late last year in the same gallery. But while their fantastic distortions of popular culture had sadness and charm, most of the work here is saturated with anger and disgust. In person, most of it is too much for me to take—especially in this, the week when articles of impeachment are hopelessly brought against a belligerent sociopath, who has seventy million followers on Twitter. I’d much rather view these images as small reproductions on a glowing computer screen to better appreciate their technical virtuosity. Their marks and lines are not searching for expression, they know exactly where they’re going and get there with finesse.

The greatest pictorial skill is found in the elaborate, satirical cartoons of Tom Torluemke. I don’t share his cynical sense of humor, but do admire his spatial stagecraft. The most explosive power is found in the designs by Paul Lamantia, even without the repulsive horror often found in his larger paintings. The most disturbing are the figural convolutions twisted together by Jason Lamantia into a bad acid trip. His imagination runs wild, but aren’t these the nightmares one tries to forget?

All of the above is typical of the pop-surrealism that has characterized Chicago Imagism for fifty years. What’s exceptional is the work of Tony Davis, the former pimp and self-taught artist profiled last year in Newcity by Dave Hoekstra. His work also owes much to popular cartoons and his subject matter, the merchandising of women in the sex trade, is just as disturbing. But his pieces have so much more grace and beauty than the formally educated artists in this show. His lines are as strong and unerring, while his colors feel fresh and cheerful rather than painful and abusive. And all the faces that he draws are attractive, especially his self-portraits as an Egyptian prince with harem. 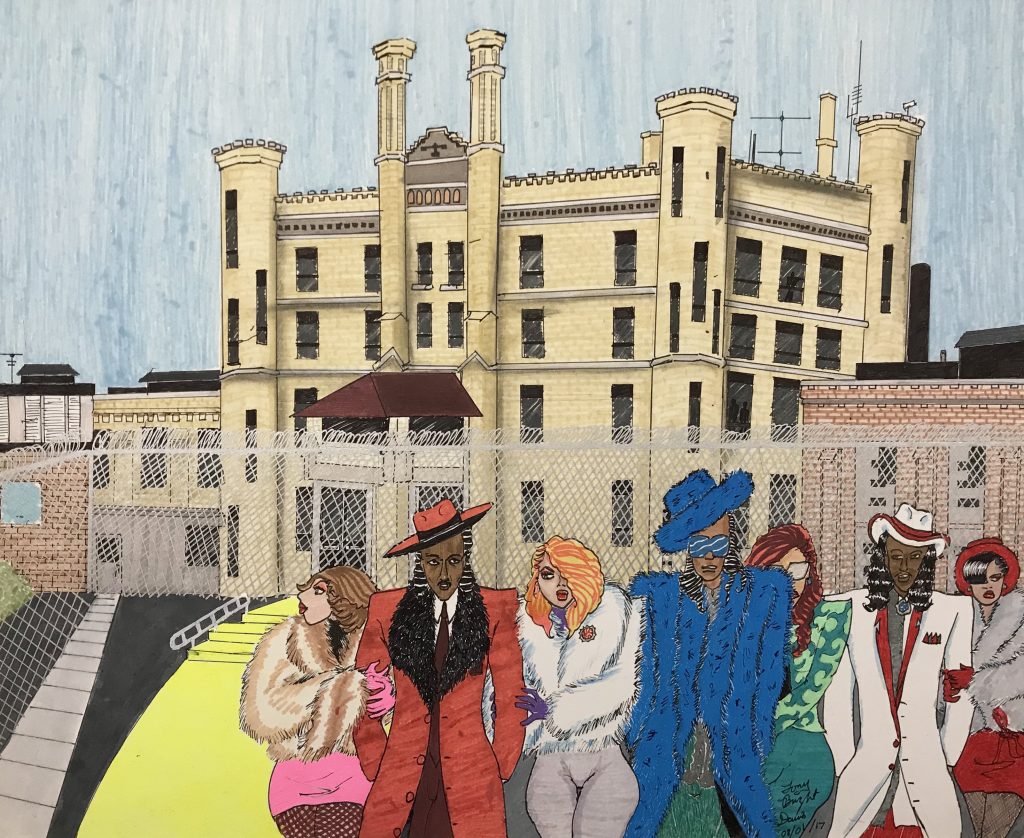 There’s an immediate similarity between Davis’ work and that of the vivid nightlife painted by an earlier Chicago artist, Archibald Motley. But while Motley depicted innocent fun in a dance hall, Davis’ world is catastrophic and depraved. The elegant pimp and his whores may stand proud and fearless in front of the old Joliet Correctional Center, but you know that their lives may be cut short.

There’s something so wrong about glamorizing such a destructive and misogynist lifestyle, just as the famous Japanese painters of Ukiyo-e were doing in that immense exhibition last winter at the Art Institute. But there’s also something wrong about rejecting the beauty that talented people have devoted so much of their creative lives to offer us. (Chris Miller)