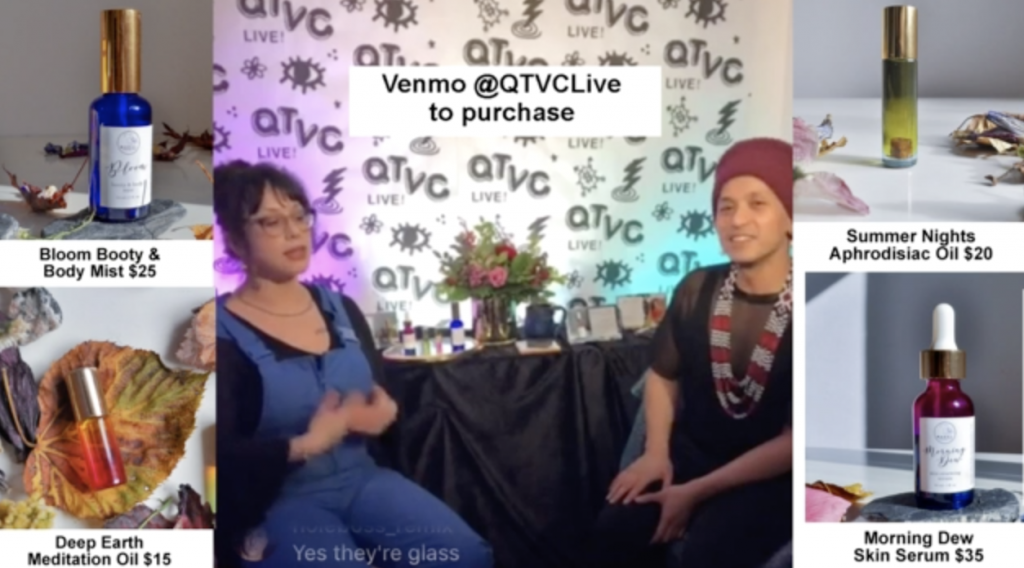 To Julia Arredondo, art is business. An artist, maker and longtime zinester who has frequently traveled the country to sell her work, Arredondo had grown frustrated with the ways the institutional art world deals with money. The way it was considered gauche for artists to sell their own work. And the proliferation of makers on DIY art and craft websites like Etsy had made the market increasingly saturated. Arredondo was tired of hustling nonstop with little to show for it. So, for her thesis project at Columbia College Chicago, where she’s finishing a master’s degree in book and paper arts, she had an idea for a new way to market her artwork: a live broadcast shopping channel. Enter “QTVC Live!,” which went on the air in January. It showcases the wares of a different artist or maker from an underrepresented demographic each week. Coronavirus has thrown a wrench into filming in-person segments, but like any good businessperson, Arredondo has a workaround. Airing Sunday March 22, from 10am to 10pm, artists will broadcast from Instagram Live, offering products for sale, giving tutorials and performing for the camera. Newcity spoke with Arredondo about “QTVC Live!,” the importance of uplifting femme-bodied artists of color and the newly-launched COVIDtv.

This is your thesis project. Where did the idea come from?

I’ve been in the academic institution for almost ten years, right? Studying art because I thought that was the right path to get me out of the circumstances I was born into. I just figured that was the way to succeed. And that’s essentially been a bit of a lie, like I’m in debt now. So sales has always been something that I’ve had to practically approach. I’ve always been making, I’ve always been selling. The institution, they’ve always devalued that in many ways. Artists aren’t supposed to sell their work. Galleries are, right? I made zines for a long time, traveled the United States selling zines around the country and I just knew so many makers.

One day I came to terms with the fact that everyone I knew made something. And all the sales platforms like Etsy, Depop, all these platforms, we had successful years back in the day, but now they’re just oversaturated to the max. Standing out was a challenge. I was on the internet one day and decided to look into what QVC was up to. And I was watching and I was like, “Damn, these people are so fake. They’re selling the ugliest shit I’ve ever seen. I would never buy from these people, but they’re making money.” I was like, I know all these makers, I think we could do this in a cool way, keep the money local to some extent and showcase all of the great products that we’re making on this lower level. That’s where the idea came from. And the reason it’s my thesis project is it’s a fuck-you to the institution as well. I’m going to do sales, I’m selling art. And this is an interesting time to be saying that because I just feel like the institution has been failing for the past couple years and finally we’re at this breaking point.

How do you break down the money, do all the sales goes directly to artists, or do you take a portion?

I do take a portion. It’s free for the artists to be on the show. I send an Uber to and from so they get home safely. And then before the quarantine, I was taking twenty percent. But now I’m taking ten. And I had a couple small grants come through, so that helps me sustain.

Who are some of the guests you’ve had so far?

I am curating the show with themes on a month-to-month basis. That’s what I was doing before the quarantine. I’m not doing in-person now. But every month was themed. January was New Year, so we had a queer, POC calendar that was super great by Marimacha Monarca Press. First episode, that was a good one to start with. And then February was self-love, self-care, our top seller, Kiam Marcelo Junio of Mahal Healing Arts was on that month and that was a bomb episode. We sold almost $200 worth of product. Super-great, non-binary healing person. And March, we’re just in March now, it feels like it’s later.

It’s been a long month.

How has quarantine interrupted the plan? When were you planning to shoot through?

Through May, because I had to have my thesis show up. I had everything scheduled. You know, April 20 was going to the dopest month for April, it was going to be so much fun. I have to figure that out still. May was going to be the big blowout. I was scheduled through October, though. Then I’ll see if I can get extra funding to keep going.

What do you have going for COVIDtv on Sunday?

So the challenge, I’ve got some advisors at school and I was like, “Hey, how do we make this a sustainable business model?” And one of my advisors was like, “Keep the model you have, you just need volume.” My challenge is viewership. So with COVIDtv, I’ve always secretly wanted to program either a radio broadcasting schedule or a TV broadcasting schedule. And so I programmed the platform, so QTVC could be inserted in that for more visibility. That’s how that started. But there are so many other people doing interesting Instagram Live, like Ariel from Xicana Healing Elements did a ganja gong wash. Her segment was phenomenal. So I was like, okay there are two of us who can hold down. There are two of us who I know for sure. I opened up and I was like, “Who wants a thirty-minute platform?” And it filled up in under twenty-four hours. I have to make all the graphics. I’m scrambling here. I didn’t think I would be this busy during the quarantine. I’m so busy. But that’s from 10am to 10pm, we’ve got thirty-minute blocks of straight, twelve-hour programming, ranging from home instruction, live painting, like I said, the ganja gong wash to totally absurd stuff, probably more performance art stuff. But it’s going to be interesting. I’m really excited to watch.

Did you have a plan already for your final project, gallery installation for your thesis?

Is the show still going on?

I think it’ll still be going on, it’ll just be at a later date. But I don’t know what that’s going to look like.

Why is it important for you to showcase underrepresented artists?

I just feel that, femme-bodied people of color are always the last to be represented in the art world. And we have a very limited voice as far as creative and feminine labor go. This is a direct response to that, trying to control platforms and disseminate artwork in our own ways. It’s definitely a response that came out of extreme frustration. Why have we been working so hard without getting the attention that we deserve? So that’s where that comes from.

You can find QTVC Live! episodes on IGTV. For more information about COVIDtv, debuting March 22 from 10am to 10pm, go to Instagram.com/covidtv.