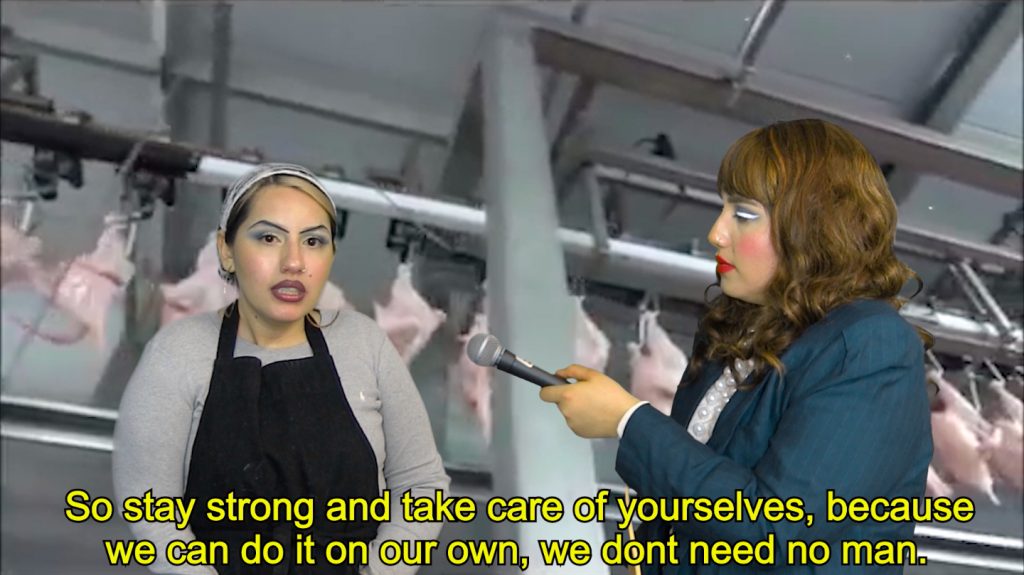 Still from “We Used To Have Cable Before You Left,” by Ariella Granados.

“I’ll never forget about you. You know that right?,” artist Ariella Granados tells herself in her video series “We Used to Have Cable Before You Left.” Granados is dressed as her stepfather in the scene, sporting short hair and with black makeup smudged on her face to resemble stubble. It’s a recreation of a memory of her mother and stepfather explaining their breakup to the artist. Granados plays both parents, who talk straight to the camera, which assumes the role of both the viewer and the artist as a child.

Granados plays up the camp, as she does in much of her work, which is inspired in part by Mexican telenovelas. “Most of the work I make is based on familial trauma,” she says. “I’m really interested in themes of identity, obviously, and I think desire, desire to be seen, the desire to be represented in media. But also taking agency of the way that I want to be desired or the way that I want to be shown. I think I found that through Mexican television and the aesthetics of Mexican soap operas, and just figures that I feel have historically been hypersexualized women or super-normalized bodies. It’s like me placing my body in images I don’t see myself represented is me taking agency of that. You know, I deserve to be represented.”

Originally from Texas, Granados moved to Chicago for college, graduating from the University of Illinois-Chicago in 2019. She was initially resistant to focusing on art. “I’ve always been a creative person, but it was something that I very much was hesitant to pursue for a really long time, coming from a single mother home and being first generation,” she says. “There were a lot of conflicting feelings.” 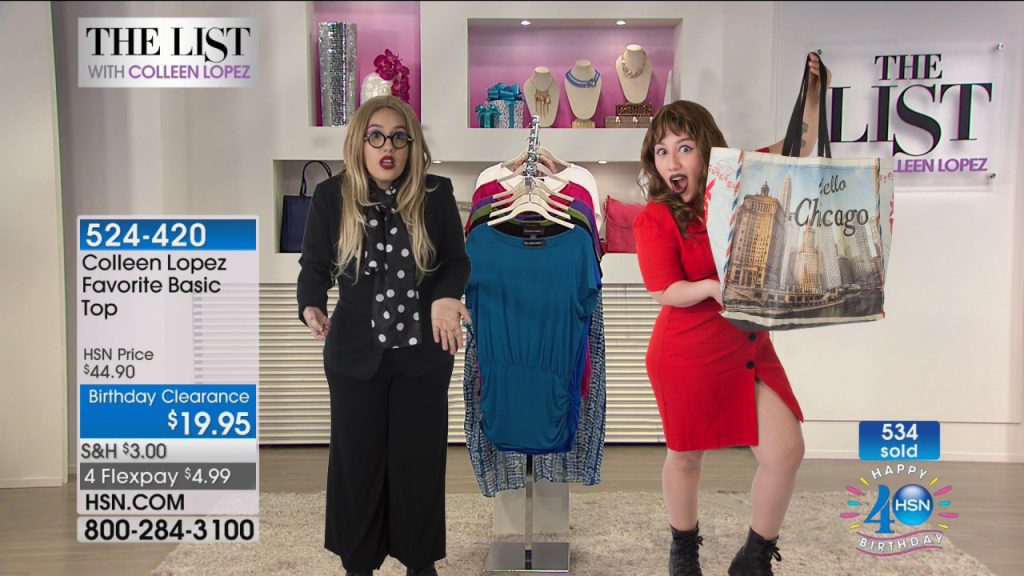 At UIC, Granados explored lots of mediums before honing in on video, which also incorporates her talent as a makeup artist. She’s done makeup for local fashion label Vihanga, and for photographs featured on Bandcamp, Nylon and Teen Vogue. Granados taught herself the art, mostly through watching YouTube videos.

Granados’ ability to transform herself through makeup is apparent in both her video work and in her series “Bodies in Progress,” which critiques the intentionality of representation in media. In one image from the series, a parody of an Herbalife ad, Granados dons exercise clothes and flexes a bicep. She also displays her disability. Granados has brachial plexus, the result of a birth injury, where the network of nerves that sends signals from your spinal cord to your shoulder, arm and hand are stretched or torn. Granados writes in an artist statement that the series interrogates “the possibility of a disabled body becoming a commodity similar to ‘conventional mainstream’ bodies” in the media, as well as the “desire or repulsion of the presence of a disabled body.” 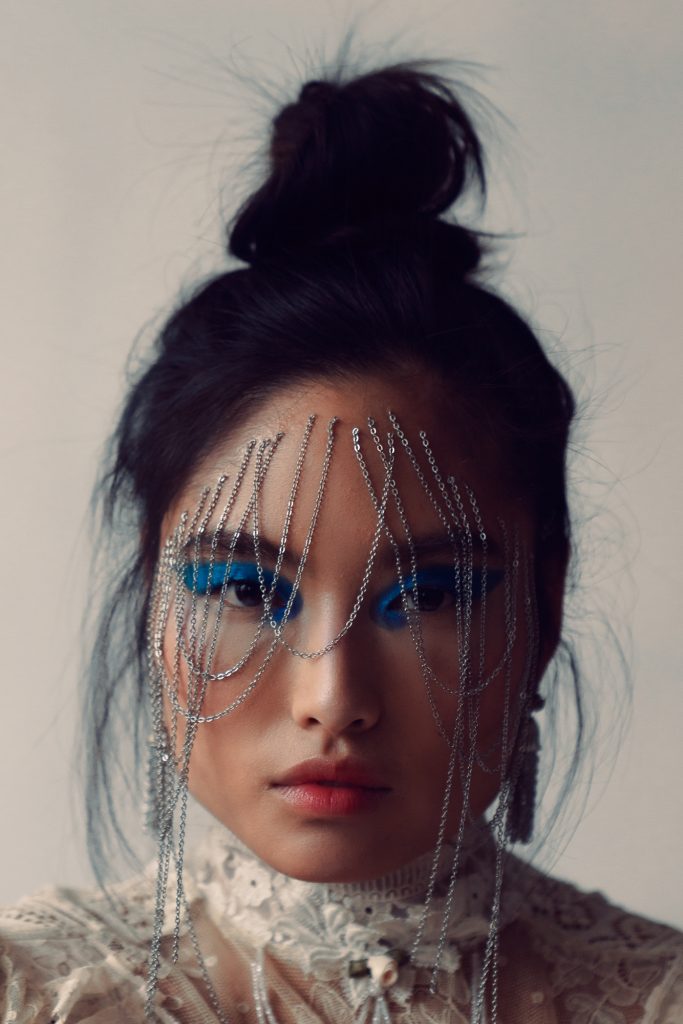 Like most of us, the artist’s life and routine have been interrupted by the pandemic. Instead of working in her studio, Granados has shifted to working in her Pilsen apartment. She has taken the opportunity to work on a forthcoming web series, “Pati and Cleo,” with her roommate and collaborator Lizz Ortiz. Pati and Cleo are the two artists’ alter egos and the series will depict experiences straight from their lives. “As queer people of color, we carry the responsibility of documenting narratives that aren’t prioritized in the media,” Granados writes. “We hope that with our low-budget, DIY approach, we can make people feel seen and give those who are different from us insight into our universe.” 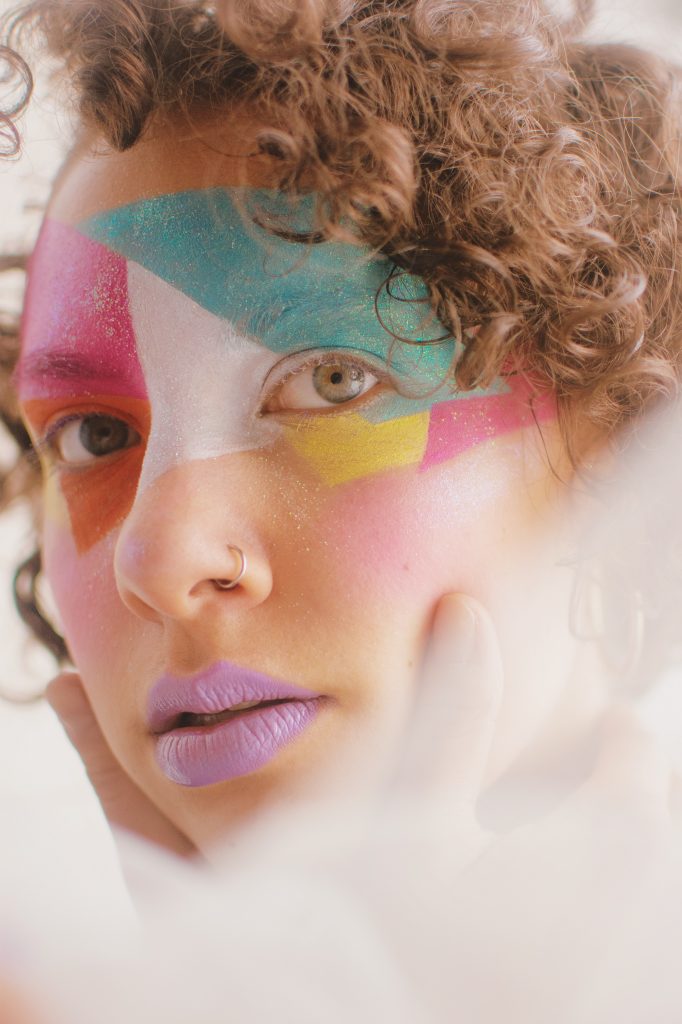 In promotional shots on the groups Instagram, the two artists appear heavily made up and caught in moments of distress. In one, Granados, as Cleo, cries into a landline; the green screen background features a sophisticatedly decorated apartment.

Aside from writing scripts and shooting for the show, Granados has been journaling and listening to music to get through quarantine. “I’m thankful I have the privilege to be in quarantine in good health,” she says. “It’s hard out here for a lot of other people. I’m thinking about people having to deal with this in war zones, through poverty, homelessness, in jails. So, practicing gratitude for sure.” Otherwise, she looks forward to the day when it’s safer to go outside, and hopes that “Pati and Cleo” can find new locations for their capers. (Kerry Cardoza)