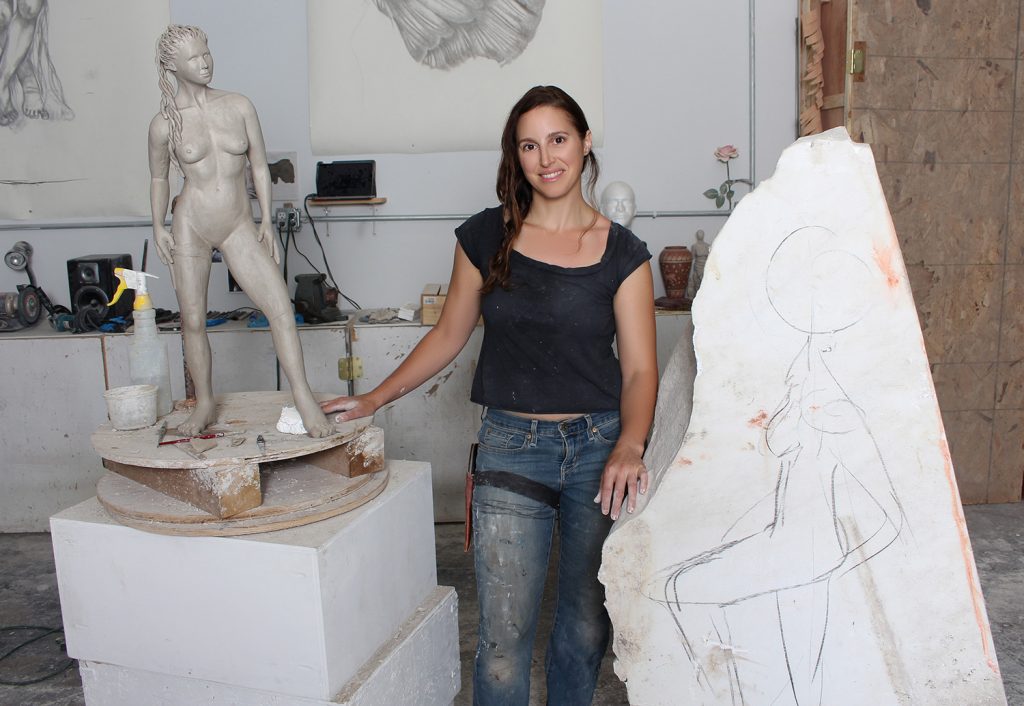 For the last two decades, Bonaguro has had a dream to create a female figure, a modern Athena, at the scale of Michelangelo’s “David.” She had a vision for representation, not only as a self-taught female sculptor, but also in showing the female form at monumental scale.

“There are usually two paths for female figures: pious or seductive,” Bonaguro says. “I want to see a strong woman that feels universal.”

Last year, she completed a thirty-two-inch fiberglass model of the project, produced from clay, and continued her research in Athens, Greece during a January 2020 residency. She is working on the next forty-eight-inch marble model while she garners support for the full-scale, seventeen-foot project carved out of Statuario marble.

Naming her project “Modern Athena” is Bonaguro’s reference to artistic realism and the history of great leaders. “They put everything into this goddess,” she says. “Athena only went to war when she had to. She gave them the olive tree. She’s just so rich in capability. It’s hard to find it all in one person, let alone a woman in history.”

She admits this project is a huge undertaking—after fundraising, carving “Modern Athena” will take approximately two years, with a completion goal of 2024 or 2025. But she’s right on schedule.

“This is a fairly complicated pose, and I want to make sure I’m slowing down the art process,” Bonaguro says. “I’ve been having a bit of a backlash against the fast art world we live in. There’s a lot of pressure these days to produce a big body of work and to have an exhibition. I’m more interested in being highly focused on one piece and allowing it to be developed without the pressure.” 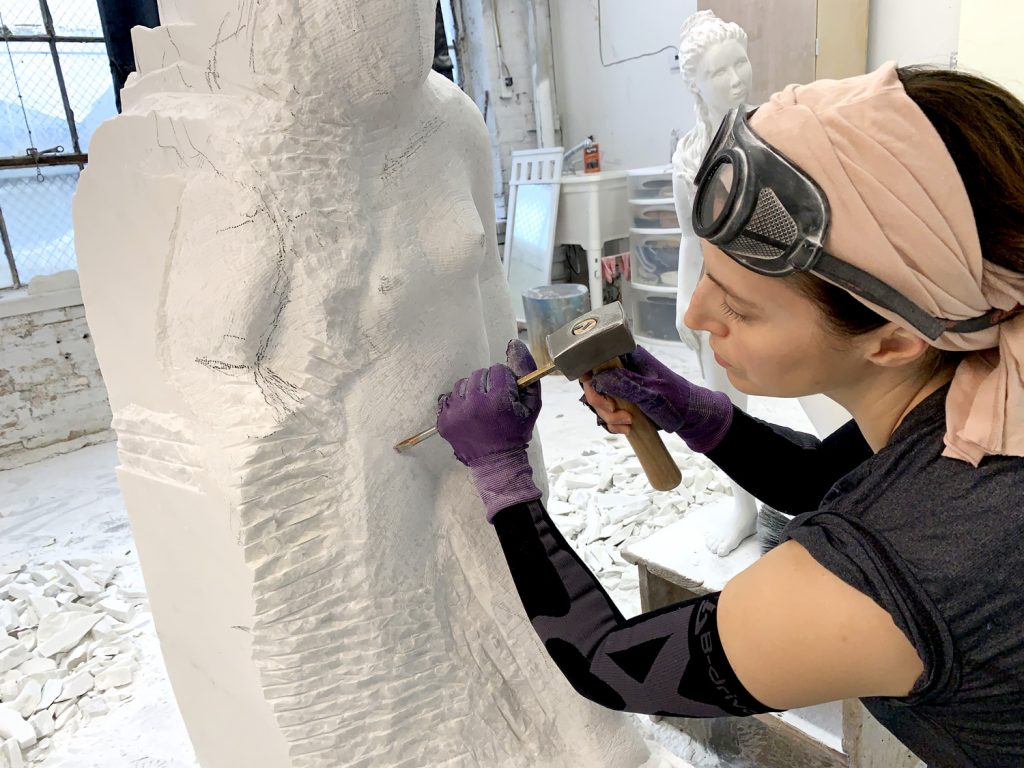 Bonaguro learned the hard way how to slow down. After graduating in 1998 with a B.A. in creative writing from Loyola University Chicago, she lived for a time in New Orleans, where she showed consistently. Although it was difficult to live off her oil paintings, she had steady work. Then Hurricane Katrina hit in 2005, and she lost everything. Back in Illinois and working at the Evanston Art Center, Bonaguro realized she was drawn to sculpture. When she was finally able to get a hold of her own marble in 2014, it was a tectonic shift for her as an artist.

“I picked up the chisel and hammer, and I thought, let’s figure this out,” she says. “By 2015, I was a sculptor. When I decide to do something, I give all of myself to it. I was working three jobs and sculpting was just very physical labor, but I loved it.”

It hasn’t been determined how much of the “Modern Athena” carving will take place in the United States or in Italy, but it’s an important component of the project, especially considering her marble of choice. Derived from a Greek word that means “to sparkle, flash and gleam,” Statuario is considered a precious marble variety found in Italy. Bonaguro notes that there has been a lot of damaging quarrying in the last hundred years, leaving a dearth of the beloved stone.

“It’s warm white, and it’s a symbol of vision and fusion. There is an inherent beauty in the stone,” she says. “The material has a personality. You have to work with it. With marble, there are different flaw lines, variations of color in the stone. Even if I didn’t carve this rock, it would be a beautiful piece of earth. I don’t find that in any other material. There’s a specific, powerful nature. It’s hard work for high realism, but the result is beautiful.” (Nicole NeSmith)