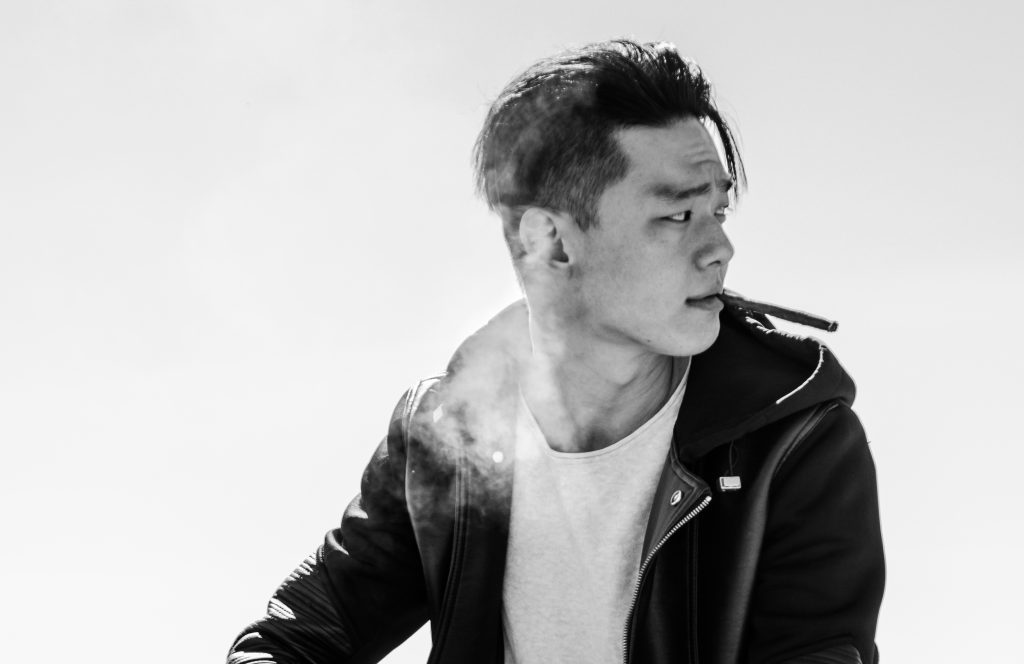 “With my work, I’m interested in showcasing metaphorical narratives of my experiences, thoughts, desires, regrets and fantasies as a human being,” David Heo says. The desire to share one’s life through storytelling is universal, but the tools to create those stories are specific to the individual and their socio-historical background. While growing up in Acworth, Georgia, Heo’s parents would tell traditional Korean folklore, and he also became absorbed in Greek and Egyptian mythology.

Ancient civilizations depicted stories upon everyday items, notably ceramics. For Heo, the soft green celadon Korean vases around his home, bearing symbols such as cranes, tigers, lotuses and chrysanthemums, left an impression. In recent works, Heo collages the surface of the vase, commonly used in ancient pottery, to illustrate a range of folklore from grand, mythic metanarratives to quiet frames of daily life. Heo renders the traditional into the contemporary as he processes his personal experiences in the moment and, as a twenty-seven-year-old living in an urban city, that means youth and nightlife. Heo shares: “Everything about my upbringing comes into play within my works, whether direct imagery, colors or animals. I have this vast lexicon of symbology and culture. I plan on utilizing all of that. But I’m going to always re-translate all of this to describe how I interpret everything about the world today.” 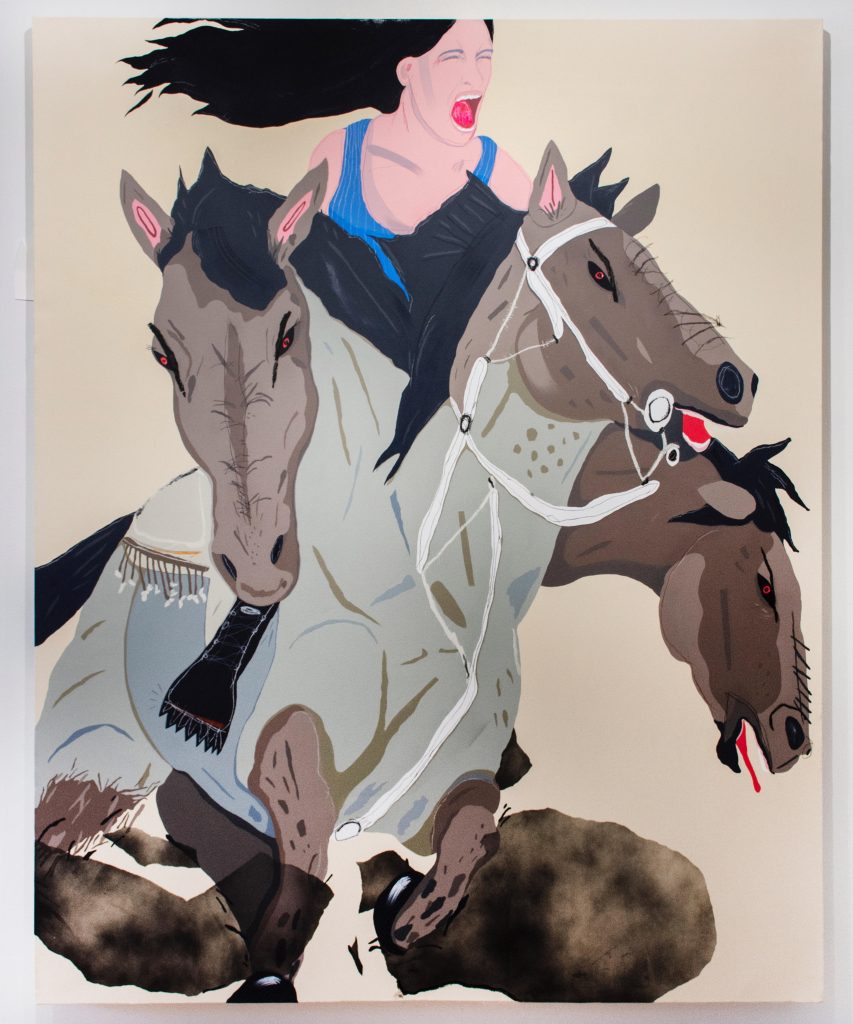 By using the symbology classic to historical paintings and illustrations of mythology and folklore—the horse, the snake, the dog—Heo typologizes the people he meets and interactions during nights out. This period of one’s life can be the most formative, emotionally heightened, and, for many, the most volatile. A snarling dog can be any aggressive and predatory man in a bar; a three-headed horse, representing past, present and future triumph is portrayed through a modern young woman, a person who is rarely, if ever, depicted in that position.

In his solo exhibition “Honey & Smoke” at Vertical Gallery in March 2019, one could fully experience the vibrancy and color to which Heo carefully attends. Observers have remarked that his color choices, particularly the hot blue and pink, are inspired by Los Angeles or nightlife. Heo clarifies that his colors also originate from dancheong, Korean decorative coloring dating back thousands of years. Skilled artisans build from a color base of blue, white, red, black and yellow to form systems of patterns on architecture. The palette and the attention to color, its ability to carry meaning and also guide a viewer through a story, comes through in moments small and large in Heo’s work; in the smallest fleck of pink strategically placed in a letter-sized collage, to the vast fifty-foot field of blue in Heo’s mural for the Chicago Art Department’s facade. 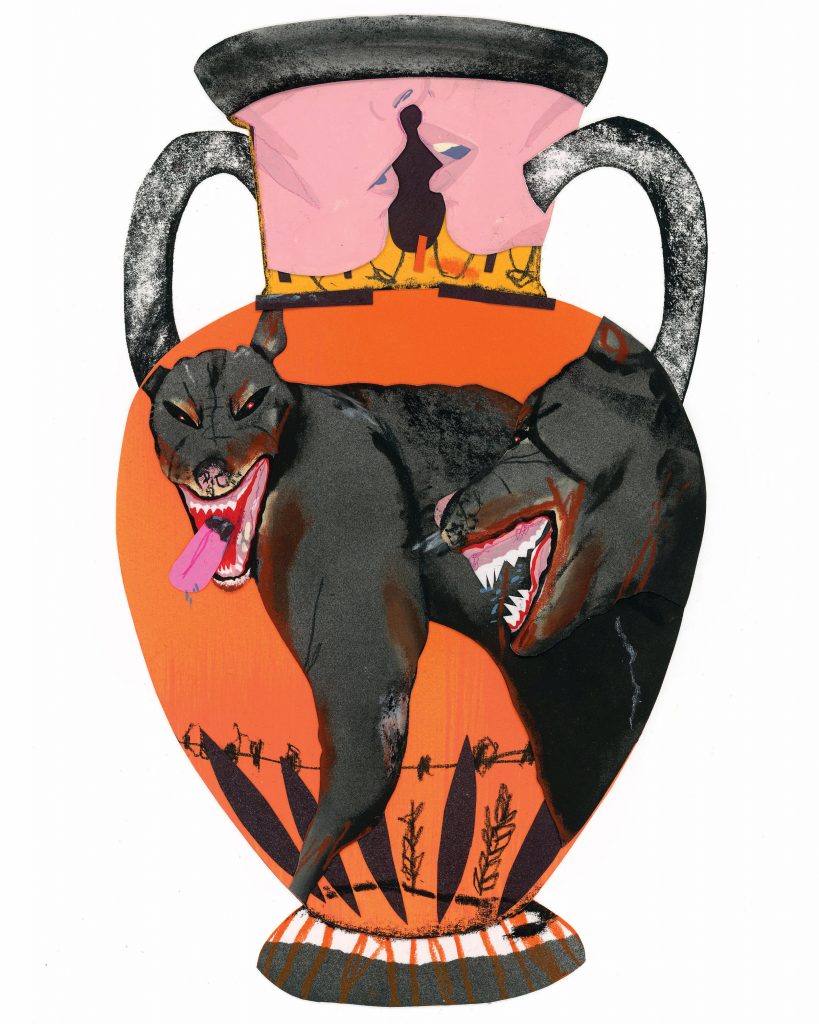 While his heritage influenced his approach, Heo is also influenced by other cultures, both past and present. Storytelling is ubiquitous and his priority in his artistic practice is to relate to a range of audiences. “My heritage, culture and upbringing will always be integral to my practice, but I’m going to make sure my work will always bypass the expectation of difference,” he says. “Relatability is the word I want my works to have first.”

In addition to his exhibition at Vertical Gallery, recent exhibitions across Chicago include solo shows at Boundary, YCA Gallery and baby blue gallery and group shows at Goldfinch Gallery, Chicago Art Department, Heaven Gallery, LVL3 and Western Exhibitions. Summer for Heo will likely be busy, with shows planned at Gasamrojieul in Euljiro, South Korea in May, OFFLINE in Chicago and Superchief Gallery in Los Angeles.

Heo also balances his fine arts practice with public projects, such as collaborations with brands, institutions, schools and publications. Recent projects include Low Rez Brewery, the Ace Hotel, Newcity and the Poetry Foundation. Upcoming collaborations will be made with Miliken at NeoCon and Yeti’s outpost in Wicker Park. (Stephanie Nicole Koch)