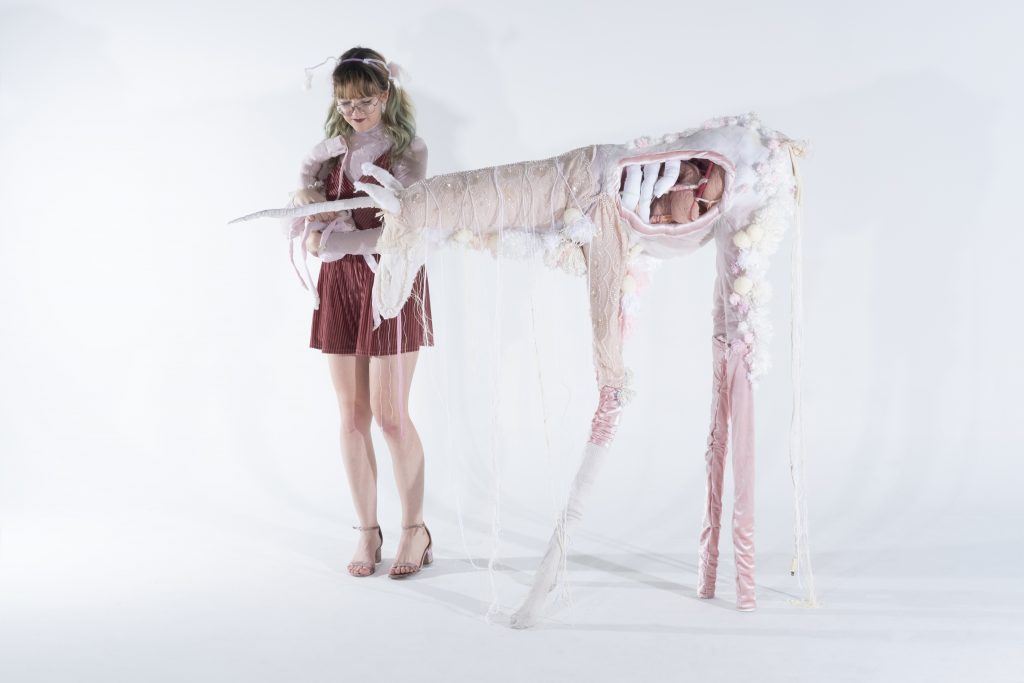 Measuring approximately one-and-a-half-feet tall, “Flap Child”‘s physical form is part plucked goose, part sock puppet. Pink masses of cloth coalesce beneath the white lucent fabric which encases his entire form. Soft plush wings spread out on each side, flanking his small body. Behind those, the bulges of his core give way to two frail legs that undulate from side to side. As he moves, his wings act as anchors, holding him in place. On January 10, “Flap Child”’s speaker died as he sang Carly Rae Jepsen’s hit “I Really Like You.” He has since retired and is working as a freelance writer and lives in the fields. One of artist Sam Hensley’s more gregarious sculptural friends, “Flap Child” was fashioned through a collaborative metaphysical process between himself and the artist.

A Chicago-based multidisciplinary artist and 2020-2021 Spudnik Press fellow, Hensley uses soft sculpture, poetry, illustration and print-making to disseminate messages of otherworldly friendship to anyone willing to listen. Her poems, parables and risographs can be understood as iconographic spiritual texts that examine humankind’s relationship with the supposedly inanimate world around us. Hensley’s online presence operates as a window into worlds of other-dimensional organisms, where decay and fragility reign supreme. 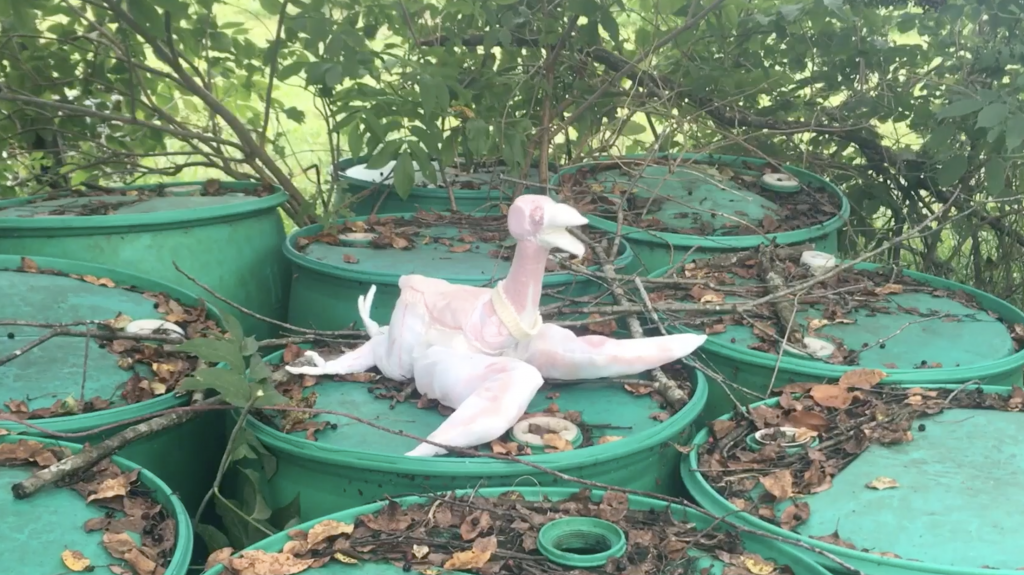 Still from video of “Flap Child”/Courtesy of the artist

As a mediatrix, she participates as a conduit between other realms and the earth. Aliens and angels alike come to her seeking friendship. For beings who communicate with her metaphysically, her illustrations and poems are mediated translations of those dialogues. In her booklet, “Welcome To Our Dimension Party,” she presents a pantheon of organisms who traveled to earth with her help. It includes collected stories, translated texts and poetry expressed by the interdimensional collective. In one instance, “Flap Child”’s poetry addresses his affection for the artist: “Every little warmth you sent skittering across the firmament to me propped me up like so many twigs or toothpicks. Even when they snapped and pricked I was thankful.” Within the booklet, “Flap Child”’s and the other beings’ expressions offer insight into the ways Hensley’s otherworldly mythos resists normative ideals of human and non-human bodies. Although not all the creatures who make contact desire to enter the physical realm, those who do, do so through a continued collaboration with Hensley.

“A certain material will grip my attention and that is when I know somebody wants to inhabit it,” the artist says, describing this process. If it’s an electronic, I start by stripping it down to the base mechanics. If it’s a fabric, I find the right skeleton in the form of electronics and stuffing. Then I clear my mind and let the form enter. It’s like trying to remember a childhood friend. As I begin to shape the form through sewing and soldering, the ‘memory’ becomes more clear. But it’s not remembering something that happened before. It’s remembering something that happened somewhere else. Recalling sideways…” There’s a sense of familiarity imbued in all of the critters, their physical forms assemblages of recognizable fabrics from toys, quilts of childhood and anatomies spliced from an array of soft forms drawn from all corners of the animal kingdom. 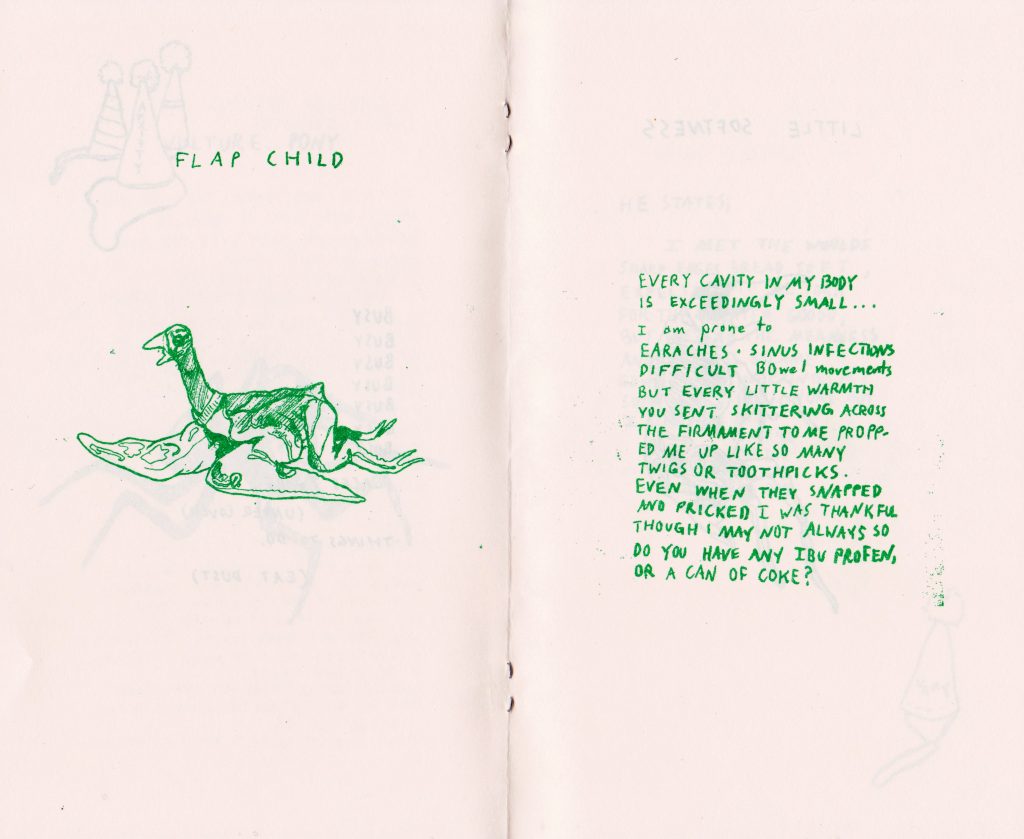 Scan of illustration from “Welcome to Our Dimension Party, ” with “Flap Child” and his poem/Courtesy of the artist

Hensley’s sculptures, the innards of which are pressed up against their iridescent cloth-membranes, combine familiarity with the grotesque in a disorienting exchange that encourages us to reassess the attachments we have with softness. “Softness lends itself to vulnerability, which in some instinctual ways is automatically disgusting,” Hensley says. “Everybody is soft inside, but to see proof of this is inherently shocking.” For many of the creatures, including the startlingly five-foot-tall “Miss Simple Goodness,” the delineation between interior and exterior is removed entirely. Though their forms may be initially seen as grotesque, their exposed yarn intestines and overt frailty depict the macabre as commonplace, as part of physicality.

Hensley shows us that when we accept the disgusting and uncomfortable aspects of softness, we open ourselves up to a greater potential for love. “Miss Simple Goodness,” “Flap Child,” and many other frail cryptids enter this world knowing the risks of bodiliness and celebrate it—they ask to be made physical. In their asking and in Hensley’s giving, they celebrate the vulnerability that exists within corporeality, friendship and intimacy. (Amanda Roach)