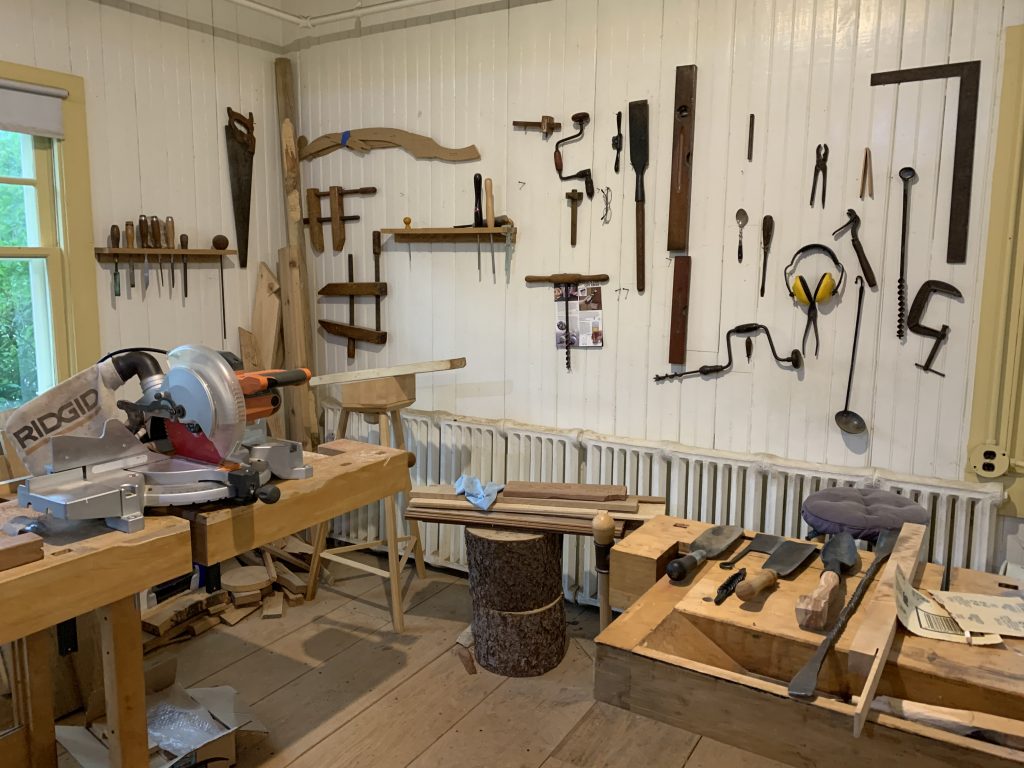 Maker Space at the Chipstone Foundation

A cabinet of wonders waits in a lonely mansion north of Milwaukee. I hope you get to see it. Using curatorial practices centered around discovery and inquiry, the Chipstone Foundation brings vitality to objects and to their stories.

The Chipstone Foundation is devoted to promoting and interpreting American material culture, mainly decorative objects, for scholars, students and the public. It has evolved in a multifaceted way from the home and collection of Stanley Stone and Polly M. Stone. In addition to the Stone residence, the organization oversees a significant presence at the Milwaukee Art Museum and is involved in projects at venues like the Victoria and Albert Museum in London.

During a recent visit, I was given objects to hold. I was asked to describe how it felt to sit in a chair designed for Thomas Jefferson. I listened to Barry White on vinyl and drank a finger of fifty-year-old bourbon. Executive director and chief curator Jon Prown took me on a nonlinear tour that veered between the historical and the contemporary, the whimsical and the problematic.

Prown pulled an iron tobacco box from one of the laden wooden shelves that abound in the house. Dating from the nineteenth century, it espoused proclamations on emancipation. On its face, a Black man on his knees reaches toward the heavens. Tobacco was still being harvested by slaves at the time, and the iron used for the box itself also forged shackles, making this box deeply controversial. Objects have power, and their lineage and story become ours if we care to learn what they represent, or what they hide. 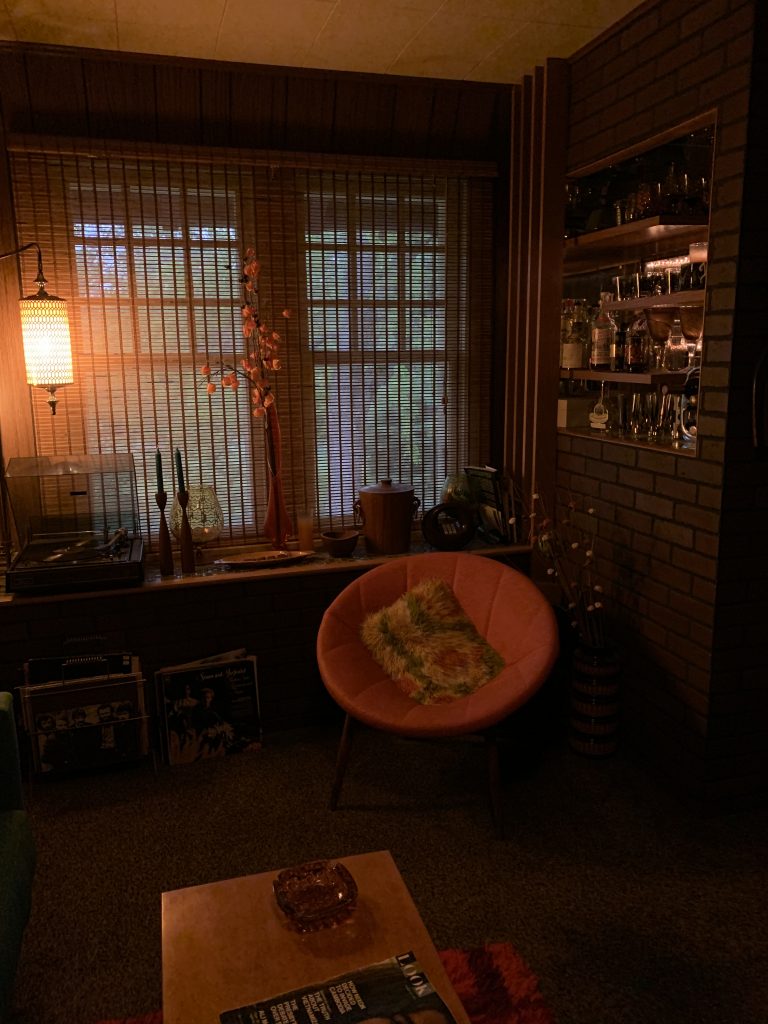 1970s lounge, created by Shana McCaw and Brent Budsberg, at the Chipstone Foundation

Chipstone also asks contemporary artists to reflect and create responses to the collection. A “Museum of Rooms,” built in the carriage house, gives viewers an immersive experience, including a living room right out of the 1970s. Created by Shana McCaw and Brent Budsberg, wood paneling, shag carpet and amber light met me as I entered. Prown put on a record, poured a drink and left me and my partner to experience this uncanny, nostalgic place.

What at first seemed to be a replica, over time revealed itself to house a juxtaposition of historical objects from the collection as well. A small, rough-hewn ceramic owl tucked into a niche melds perfectly with the groovy room, but is in fact an English Staffordshire work from the late-eighteenth century. It is an object out of time, reappearing in another age. The fact that this little owl feels like it is from the 1970s begs viewers to ask why. What is the difference in the maker’s intent as opposed to the viewer’s interpretation? How does context affect how we see historical objects?

These types of questions and many more challenge viewers. Another McCaw-Budsberg collaboration offers a room that someone appears to have just left. Apothecary bottles, powders, and crushed and dried plants litter tables, chairs, rugs and the floor. It appears someone has collected this ephemera from the outdoors to create… What? For whom? We are left to conclude our own narrative from the magical objects and possibilities left behind by a mysteriously absent figure. The room is an invitation to speculate and to imagine. 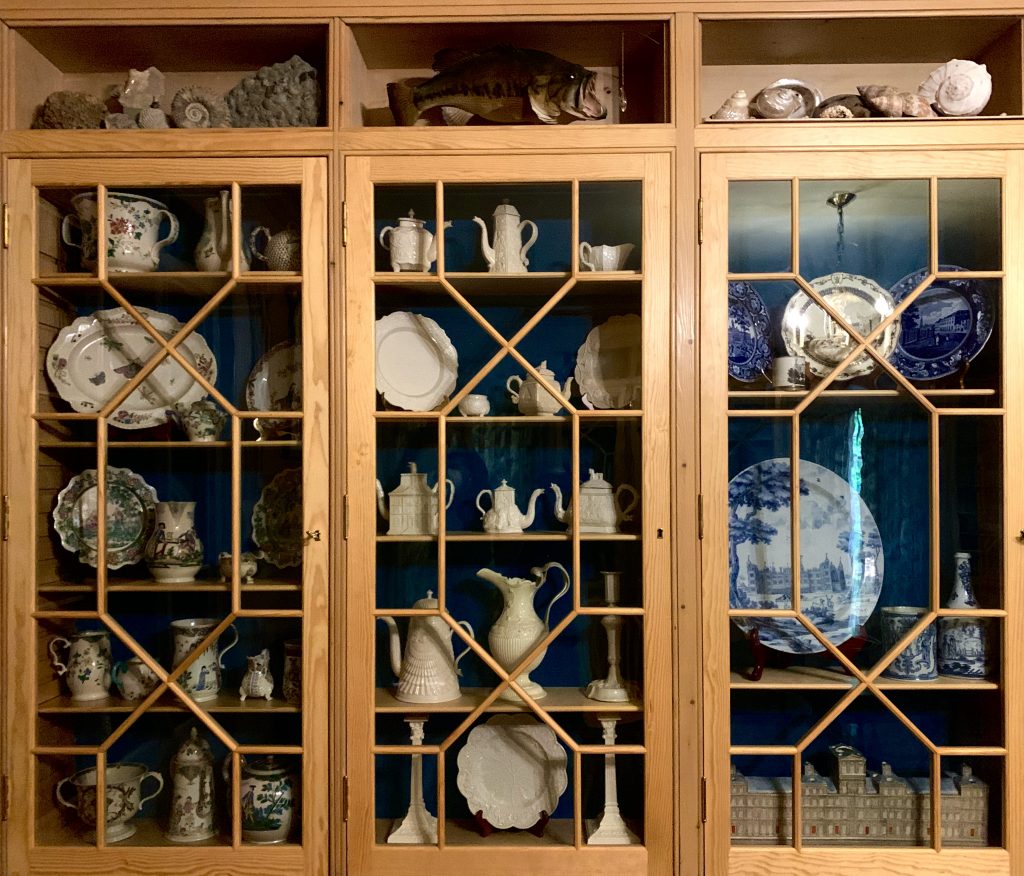 Shelves in the Chipstone Mansion

There are no didactic materials or wall texts. The viewer discovers and provides as much information as the objects themselves. Architectural students from the University of Wisconsin-Milwaukee build their own rooms on the grounds as an assignment. Maker spaces are available for students to carve, forge and physically connect with the process of creation. The Foundation has developed to give viewers tools to understand a quintessential truth about history, that it is never linear, and that it belongs as much to the present, and to the personal, as it ever has the past.

Wandering the grounds and rooms of the large house and buildings, I was struck by how empty and quiet it all was. We were the only guests. The campus can’t be visited by large groups, as it sits in a ritzy, residential neighborhood. Buses are not allowed. I was struck by how perfectly the property echoes the isolation and distance that the pandemic has caused. Looking at the world from a quiet remove seems to be how we interact more often than not these days. I felt this place reflected our times in psychological as well as physical ways. Although sequestered, the Chipstone Foundation has created indelible marks on the study of art and how we experience it. (Rafael Francisco Salas)

The Chipstone Foundation is open by appointment only. Other ways to engage with Chipstone collections include its galleries at the Milwaukee Art Museum, videos and resources online and at the University of Wisconsin-Madison’s Library for the Decorative Arts and Material Culture.