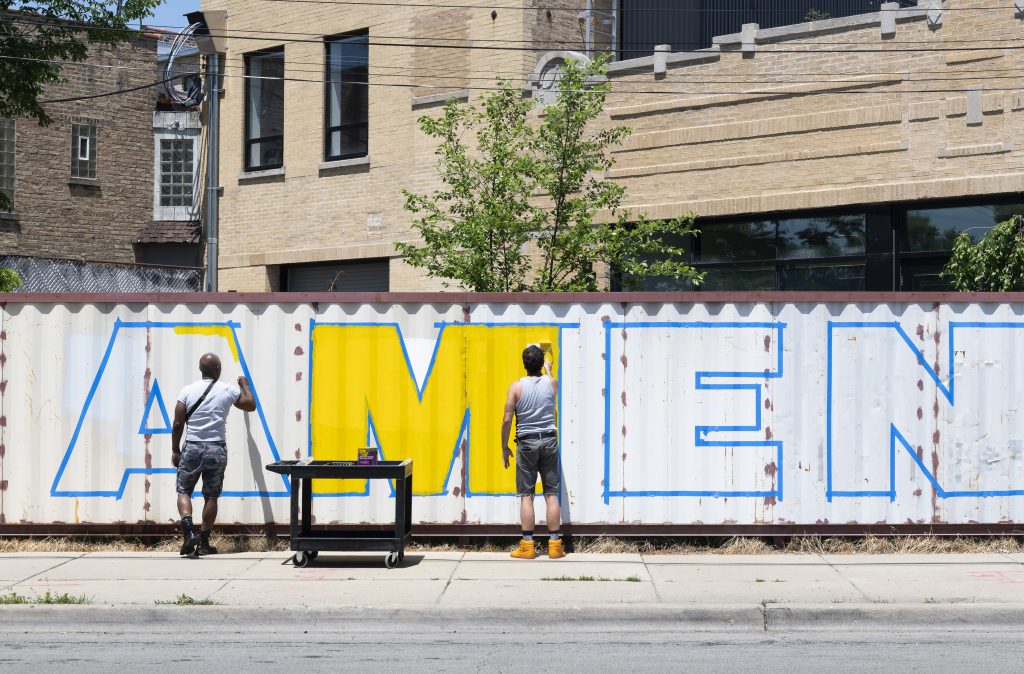 “As Americans we are all aware that our country is founded on freedom. Black people know all too well the value of it, but white people actually get to feel it. Until all the unaccounted-for racist actions are aired and real amends are made, with subsequent and sustained changes in the best interests of all, our American foundation is a false one.” Bob Faust is right.

Such was the most recent manifestation of injustice toward Black lives in this country that not even the dangers of a global pandemic could stop the outrage—people joined forces, disregarding social distancing and breaking stay-at-home orders, to jam-pack the streets by the thousands and stand in solidarity with what matters. The anger, violence and grief following the death of George Floyd sparked one of the nation’s most vital periods of civil unrest in years—but one that has been years in the making. Black communities have suffered inequities for far too long.

As the United States and the world convulse with massive protests and activism in response to police brutality, social injustice and racial inequity, arts and culture should be among ways to effect social change with the most impact. Enter AMENDS, a community-based art project on a mission: to eradicate racism—starting with the self.

Created by Nick Cave and Bob Faust, partners in work and in life, AMENDS, partly inspired by turmoil and tragedy and partly in response to it, forces a look inward. “As a mixed-race couple we see how this is not a ‘their’ problem, it is an ‘our’ problem and we have to work toward the eradication of racism together,” Faust says. This is why they ask everyone to dig deep to acknowledge and take responsibility for personal roles in the proliferation of racism through publicly shared confessions and apologies.

“George Floyd was another tipping point for me,” Cave says. “It made me question my own practice. Is my work purposeful enough? Why does this keep happening? How can I do more? I’ve been working against this problem and for this issue my entire career and am more committed to it than ever. We all need to be talking about it. AMENDS is one way I can ask all to contribute and to keep the conversations and momentum of right now.” 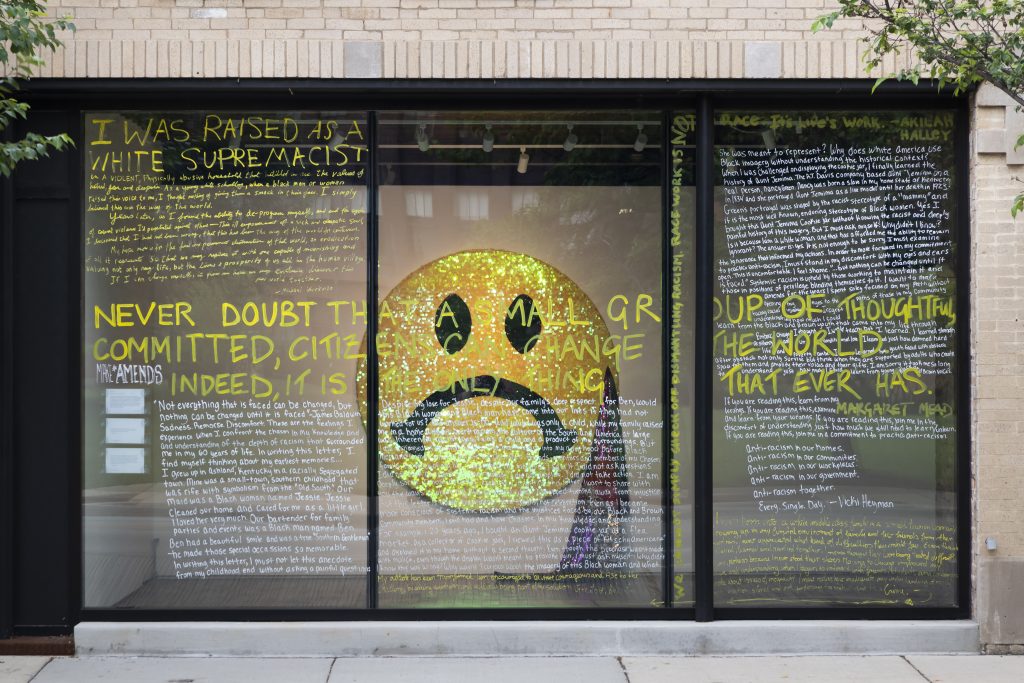 “Letters to the World Toward the Eradication of Racism,” part of AMENDS at Facility/Primary photography: James Prinz

The project, presented by Facility, the duo’s multidisciplinary creative space that encompasses art, design and community, is trifold. The first component is “Letters to the World Toward the Eradication of Racism,” a collection of handwritten reflections from Chicago culture leaders in the form of notes, quotes or letters to be displayed on the gallery’s storefront windows.

“While I cannot wish away my privilege, I acknowledge it, apologize, and commit to justice in any way that I can,” reads one. “It feels—not scary, exactly—but consequential. Heavy. Acknowledging that weight, I immediately want to decenter myself, my White self,” reads another. “I need to claim my racism. I need to listen more. I need to be louder. I need to demand more. I haven’t been loud enough. Enough is enough.” The words, written directly on the glass surface, seem to be floating as they reveal the display backdrops—life-size bright yellow frowning face emojis. Reading them triggers an emotional overload as the lines between trauma and healing blur. The experience is cathartic.

Across the street, at Carl Schurz Public High School, the project takes the form of community-wide expression. “Dirty Laundry,” the second part of AMENDS, invites any and all individuals to identify their own roles in racism and make amends with their fellow human beings. The process is simple. “Step 1: Identify the pieces of yourself that have contributed to holding our society back from genuine equality and equity. Step 2: See them, say them, and then air them by writing them on a yellow ribbon and tying them to the community clothesline. Step 3: Invite others to join you in this community-wide effort to eradicate racism.” 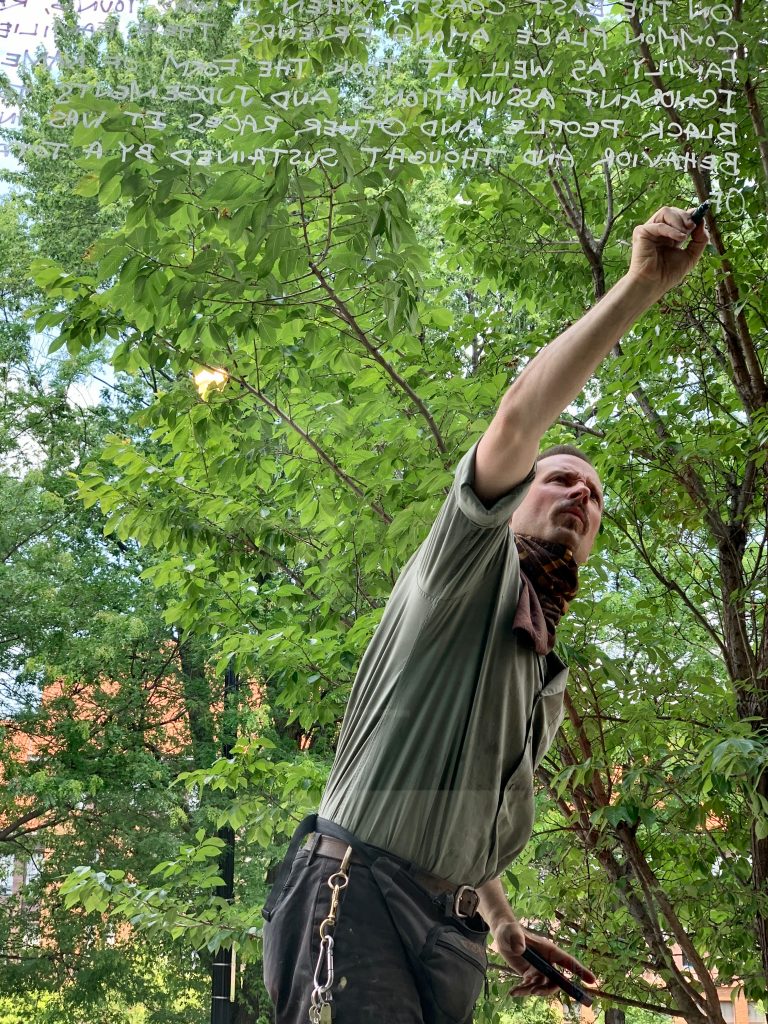 “Letters to the World Toward the Eradication of Racism,” part of AMENDS at Facility/Primary photography: James Prinz

“We are honored to be working with Carl Schurz High School, our neighbor and a neighborhood pillar, to realize the community component of AMENDS—a community clothesline to shed light on our individual roles around systemic racism,” Faust says, stressing the importance of self-reflection, human connection and conversation. “We invite everyone to use this moment and this project to find and share things they can change or ways they can help dismantle racism.”

The project’s final component asks for global participation in the form of a hashtag: #AMENDS. The word, also prominently spelled out on the side of the Facility building in a mural of the same hue of bright yellow, is hard to disregard. “It is not a call-out, but rather a call to action through acknowledgement and subsequent change in each of us,” Faust says. “Those who come from especially privileged backgrounds have enormous responsibility in this moment. They must be more than allies, they must actively root out the truths so long buried and ignored, beginning with the Self,” he adds. “There seems to be many prongs that need to be used to get at such a deep-seated issue. Policy and leadership changes are needed, but changes within the heart are needed, too, and Facility is well-positioned to get at those. Through art and by sharing vulnerable examples from others, we can ask for very personal participation—participation that is reflective and consequential. We believe sincerity and real apology with substantive action is needed to make genuine change in the world and not just on paper. That is where making amends came from as the driver for this project.” (Vasia Rigou)