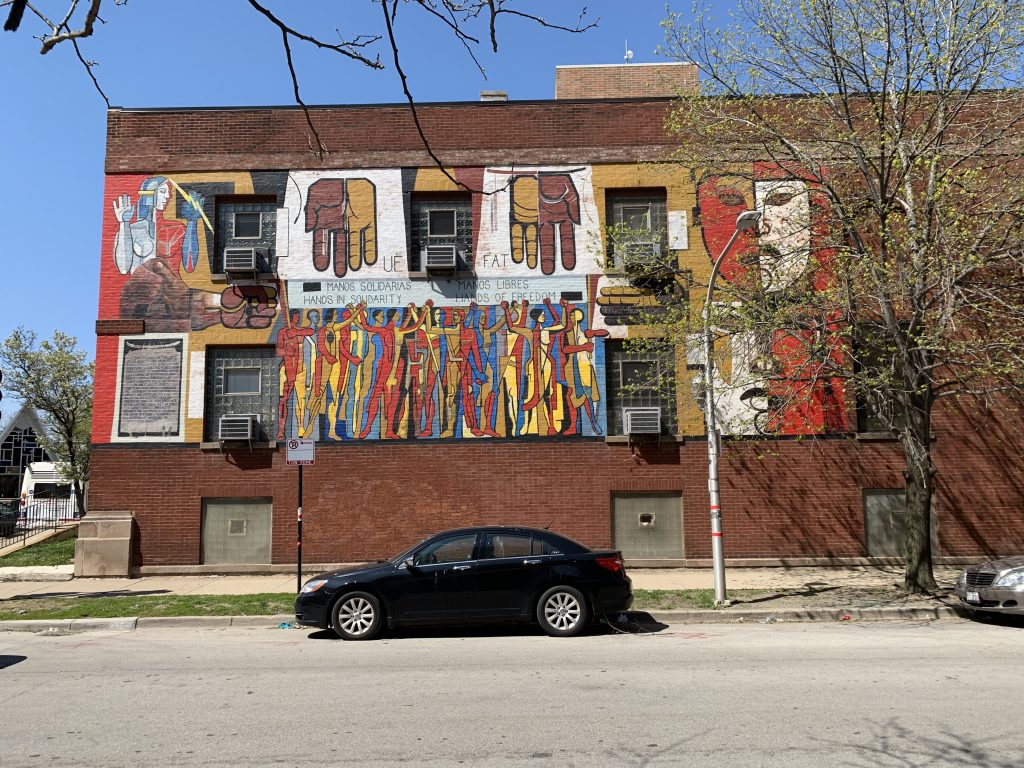 The museums are closed, the galleries shut down but art goes on. As a historian accustomed to thinking about images and objects analytically, I have noticed a growing change in the ways I come to art in the anger, anxiety and loneliness of lockdown. For the first time in years, I find real solace in the art I seek, a closer and more personal joy in paintings and sculptures that may not have had me or the pandemic in mind. I am not alone in this; even Jerry Saltz has turned introspective, waxing poetic about Botticelli. But the new strictures imposed on everyday life have been an opportunity to slowly and methodically work my way around the public art of Chicago that I have taught in college and community classes for years, to explore the murals I’ve never had time to squeeze into lesson plans and revisit the monuments that make up the city’s rich public sphere.

Take “Manos Solidarias—Manos Libres/Hands in Solidarity, Hands in Freedom,” a mural painted on the United Electrical Workers Union Hall in 1997 by Daniel Manrique Arias. A frieze of quasi-Cubist figures, rendered in bold primary colors, raise their fists in joyous solidarity, flanked by masks, hands and an inscription explaining the picture’s iconography as an ambitious testament to the racial and cultural diversity of the working class and a call to organize. Designed in partnership with workers, the piece came out of a collaboration between muralists in Chicago and Mexico, who joined in the late nineties to make a series of public works addressing labor movements and the deep cross-border connections that informed radical struggle in both cities. Mike Alewitz painted the best-known examples from the series on the Frente Auténtico del Trabajo headquarters in Mexico City and, just down the street from Manrique’s mural, at Teamster City at 300 South Ashland (discussed insightfully in Sheila Streeby’s book on the visual culture of world movements), both murals depicting Chicago revolutionaries Lucy and Albert Parsons.

Almost as soon as they went up, the murals were taken as examples of how artists can contribute to radical struggle by visualizing intersectional histories of activism and incorporating authentic strategies of solidarity in their working methods. It’s noteworthy that a short walk north and west of Manrique’s painting takes you past less thoughtful commemorations of labor history. A recent statue in Union Park honors James Connolly, the Irish Socialist who helped lead the Easter Rising and was executed by the occupying British army in 1916. A straightforward life-size bronze, it simply reprises the monumental formula used to memorialize figures from all walks of history. Worse is Mary Brogger’s memorial to the 1886 Haymarket riot, installed on Desplaines Street which, as Nicolas Lampert shows, blunts the events’ radical politics with a saccharine ode to free speech. 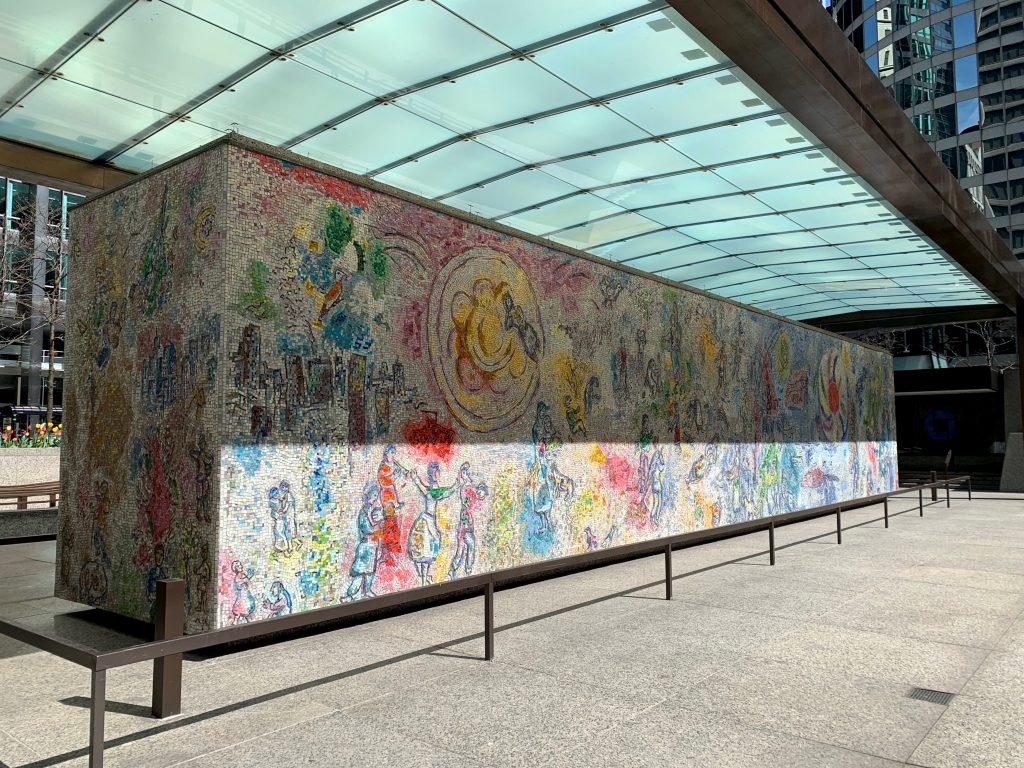 Rachel Cohen, my former professor, has kept an online notebook revisiting works of art she remembers from before COVID-19. She also writes about murals and sculptures encountered in the present, like the recent bust of Gwendolyn Brooks in a small Kenwood park: “I am learning about this sculpture… by visiting it many days in these months. It is of great value to me to have a thoughtful sculpture growing from a writer’s life that I can go and look at, and be in the space of.” To visit, to look, to revisit and look again marks out a contrapuntal rhythm of viewing that many critics frame as the ideal way to get to know artworks, frustratingly hard to come by in a world of frenetic schedules and rotating shows. Contemplating Marc Chagall’s iconic mosaic “Les quatre saisons” in an eerily deserted Chase Plaza, I realized that I could, for the first time, pace slowly around it, taking in repeated images of the Chicago skyline riddled with the artist’s lumpy figures and trademark animal-human hybrids. I’d never noticed before just how the shimmering fields of color are made to extend across discrete scenes, or the variety of techniques that Chagall used to translate his distinctive painterly marks into the very different medium of grout and tesserae.

I don’t mean to romanticize the many walks I’ve taken to see public art. It’s hard to forget the reason why the streets are so empty or, as Minneapolis burns, to forget how public space is regulated by structural violence. A spate of recent exhibitions and publications have shown how the rich legacy of Black, Latinx and Native American contributions to Chicago public art was long ignored by the art world and, indeed, physically destroyed by forces of gentrification. Walking Chicago means coming across the traces—some large, some small—of power etched in the urban environment. In a classic study, George Lipsitz showed that “race is produced by space, that it takes places for racism to take place,” and I’ve stumbled into absences and erasures as I try to track works down. When I arrived at the site of “Knowledge Is Power,” an Afrocentric mural painted at a Boys & Girls Club where young members of Earth, Wind & Fire played talent shows, I found nothing but cookie-cutter housing; when the Henry Horner Homes were demolished, the mural came down, too. (The Chicago Bulls had already built the club a controversial new facility in 1996.)

The Floating Museum has done a lot in recent years to tease out local histories of race and violence through public art. I hiked to their collaboration with Mark Blanchard at the 51st Green Line station and was unexpectedly riven. A glowing lightbox depicting the lakefront at sunrise, it emerges from the station’s shabby walls as a striking reminder of the public spaces that are so inaccessible to us now. Words scratched over the concrete in the lower right corner of the photo read “I know a kid who wore a hoodie…,” qualifying the idyllic scene with the chilling memory of Trayvon Martin’s brutal 2012 murder. The work floods your senses and stabs your heart. To be moved and made to think: I’ve always known that public art can do these things, but I’m more grateful now than ever for its capacities. (Luke A. Fidler)