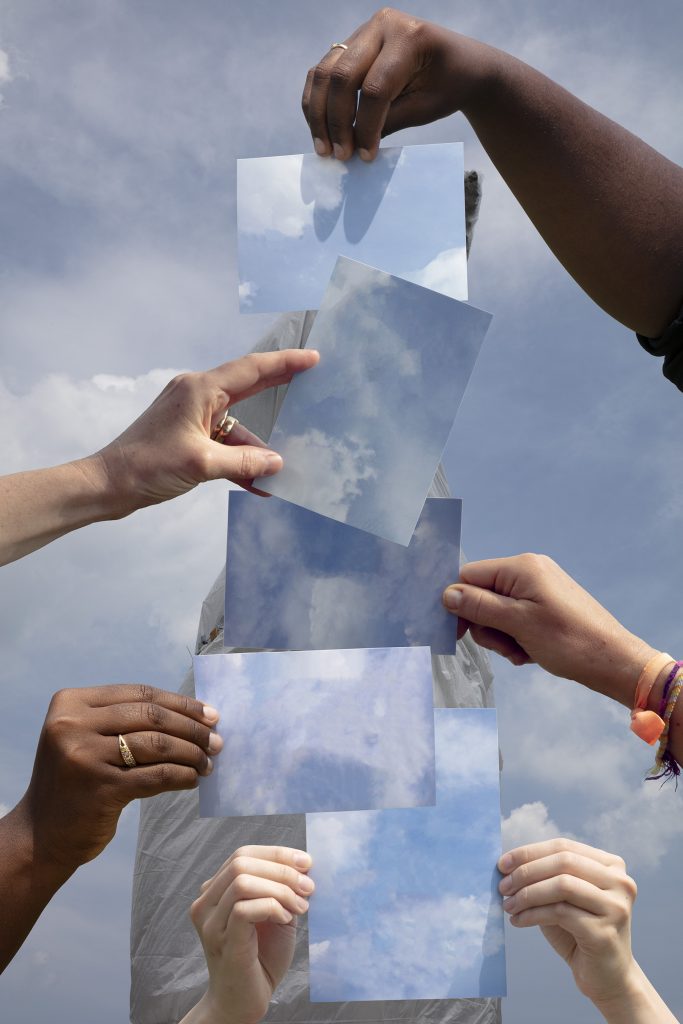 A little over a month before Mayor Lightfoot ordered the temporary removal of the Christopher Columbus statue from Grant Park, the monument disappeared briefly from its plinth. A group of women gathered in the park on June 28 to perform a ritualistic healing of the space, directed by the artist Kelly Kristin Jones. The photograph of the performance, “Sky Falling,” shows six hands holding up pictures of the sky in front of the then-covered statue, blotting out the monument to violence.

“I found it really poetic to see these strong hands come together in this space,” Jones says. “Aesthetically it’s really interesting, but more than that, it was such a powerful action.”

Jones has long created work around contested monuments, fascinated by the disingenuous ways they’re used to manipulate the past, their almost invisible presence in the landscape, as well as the fraught history of white women’s involvement in their creation. She became interested in the subject during a post-MFA fellowship in Atlanta, where she was struck by the sheer number of public monuments. Upon returning to Chicago, she realized her hometown also had a fair share of problematic tributes to America’s violent, white supremacist past.

As a white woman, Jones feels a sort of duty to grapple with these monuments. It was white women, namely the United Daughters of the Confederacy, who spearheaded a post-Civil War movement to fund and build confederate statues. “As a white woman who is now mother to a very tiny daughter, I feel more urgency to continue to work with these,” she says, “both because it is a kind of inherited, matrilineal history but I also want a different kind of public space for her.” 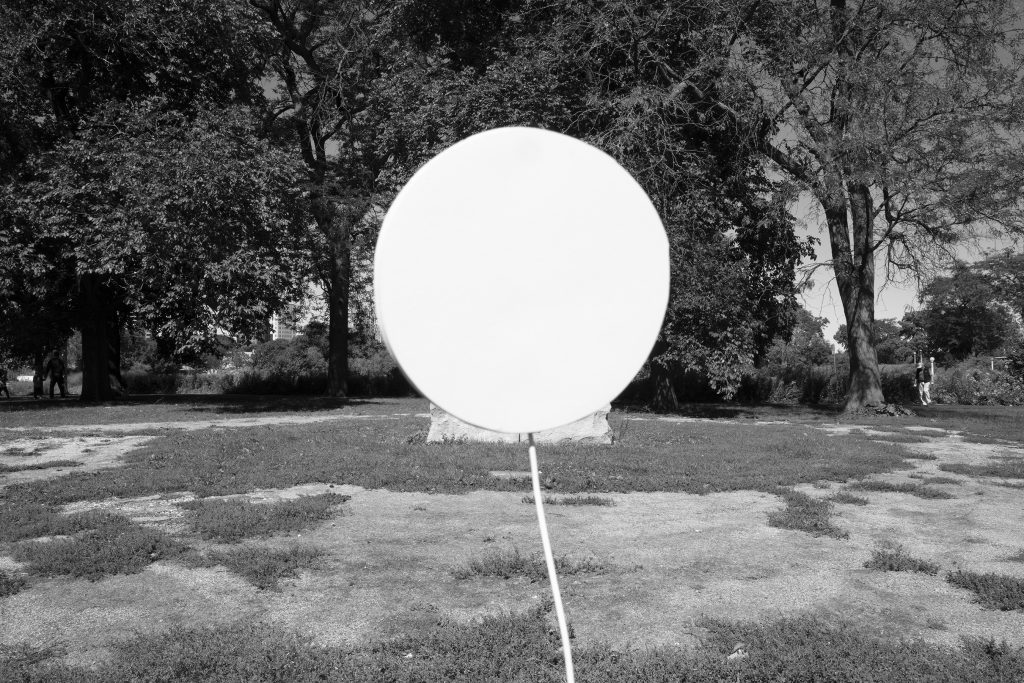 Trained as a photographer, Jones uses traditional photographic techniques—dodging, spot-healing—in her work, and is careful to leave the evidence of these aesthetic manipulations. The digital scars mimic the scars left by these monuments, which erase the lived experience of entire populations of people—namely indigenous folks, people of color and women. But she’s also interested in the ways that the history of these whitewashed monuments parallels that of photography itself.

“The history of these sites and myths that are promoted, like the history of photography, they’re able to hold a truth and a lie simultaneously and in that way really control and manipulate us and this larger American story,” Jones says. “So I’m wanting to use those characteristics as tools in my own work, and continue to manipulate them and work them into something else.”

Take her “Coverings” series, which “Sky Falling” stems from. For these works, Jones visits a site and takes photographs of the monument and the surrounding landscape. She then returns to her studio and generously spot-heals the monument, erasing it from the location. Large-scale images of the photoshopped work are then printed out. Jones returns to the monument and tapes the photos to the site, wrapping them so they blend, messily, into their landscapes. The resulting documentation are beautiful tricks of the eye. A picture of a high-rise, where the windows don’t quite align. A mound of grass and wildflowers strangely protruding from the ground.

In her “Poems for my Mothers” series, the artist collages the facial features of women onto the faces of male statues, a more playful, absurd way to remake the landscape. 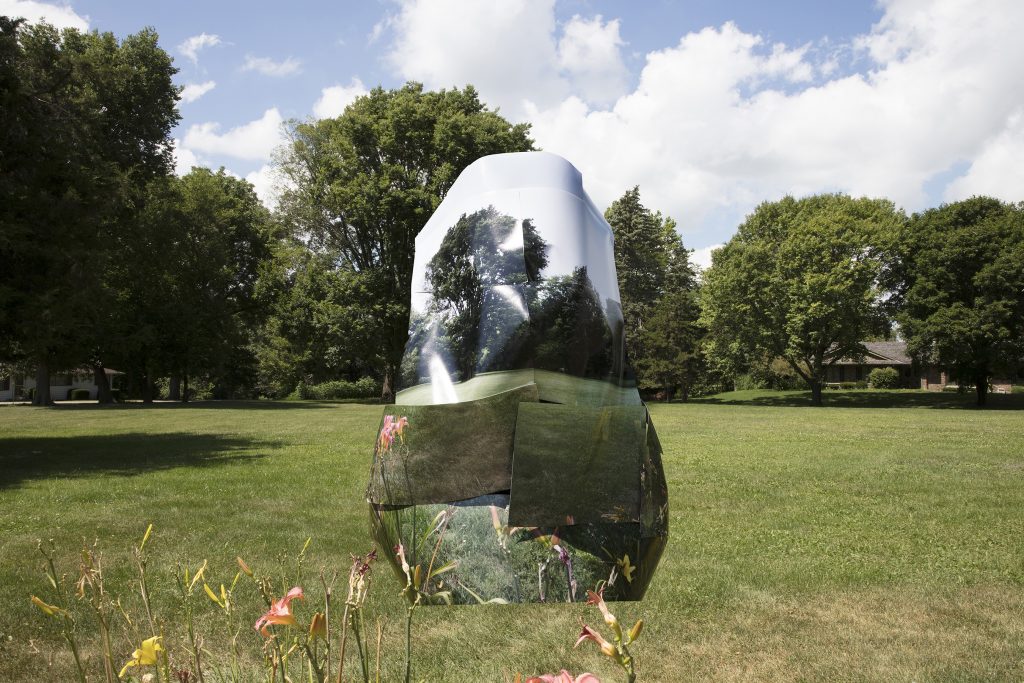 Kelly Kristin Jones, “I was aware of him before he cleared his throat (he came up from behind)” 2018. Archival pigment print 26 inches x 38 inches

Jones is fully aware that her identity as a white woman, pregnant while creating some of these works, gives her the privilege to stage these public interventions. She has never had a violent confrontation or a run-in with law enforcement, although what she’s doing is technically illegal. “I think oftentimes folks think I’m cute when I’m taping or climbing these monuments, and it’s not seen as a threat,” she says. “It’s certainly a privileged and strange position.”

The artist is thrilled that these public monuments are undergoing increased public scrutiny. “Someone asked me if I’m worried that I won’t have sites to visit and I said that would be a fantastic problem. I would love to have to move on to something else,” she says. “I hope that some of these empty plinths that we now have will continue to push us in the right direction and inspire others to join in and continue to really address these sites and stories with clear eyes.” (Kerry Cardoza)