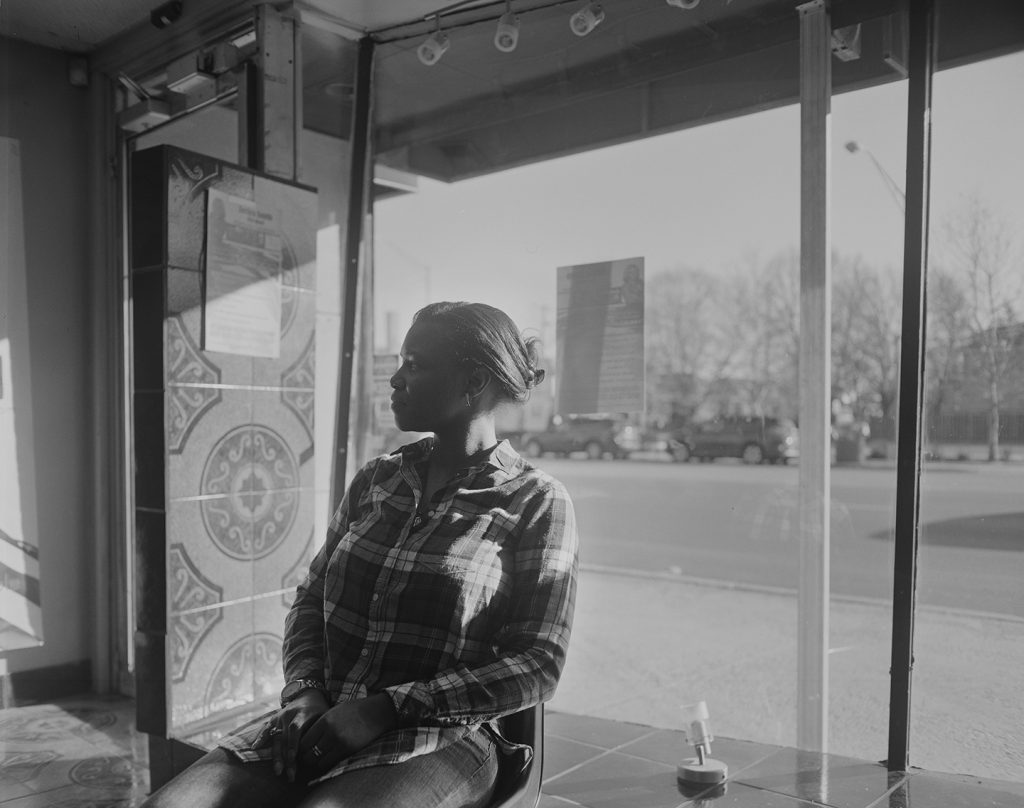 Locate 41.8949° N, 87.7654° W and you are positioned on the far West Side of Chicago in the neighborhood of South Austin. You are on the corner of Chicago and Central Avenues, to be precise. I know of those coordinates and of that place because of Sasha Phyars-Burgess’ project: “UNTITLED AND YET TO BE DETERMINED, 41.8949° N, 87.7654° W (AUSTIN).” Austin, the site of her photographic study, is a community area that has historically been disregarded by the city of Chicago within their strategic plans for investment and social services. Within her project, one can see a duality of photography’s work. In a space between art and documentary, indeterminacy and precision, Phyars-Burgess undertakes figuring the community of Austin and the people who live there.

This is the part when I present the current condition of Austin—vacant lots and foreclosures, food deserts, school closures, a fourteen-percent unemployment rate, gun violence—before I pose a version of the question, “How did we get here? And how can art liberate, investigate, interrogate, present new possibilities, offer a reflection of society, create a visual identity?” But you can take the time to study and learn of the multiple relations that come together to form this concrete reality in Austin.

I will say that when you get the history, you cannot deny it—there is an unabashedly racist, predatory and coordinated effort between real estate agents, banks, developers, employers, government officials and police departments that go deep into the past. Coupled with lack of care and acknowledgment by the mayor, city council and other community stakeholders, the abandonment of the people who live in Austin and the neglect of their infrastructure continues more or less unmitigated.

The last time Phyars-Burgess and I discussed her work, she brought Ta-Nehisi Coates’ “Between the World and Me” to the conversation:

I have spent much of my studies searching for the right question by which I might fully understand the breach between the world and me… I drew great joy from the study, from the struggle… the struggle has ruptured and remade me several times over… The changes have awarded me a rapture that comes only when you no longer can be lied to.

“I hold that quote so close to my heart because I’m not gaining knowledge for the sake of having it. It’s so that when people lie to me, I know it,” Phyars-Burgess says. Following Coates, the lie is the Dream. That prosperity, care and health are afforded to every Chicagoan is the Dream. What determined histories and dreams have in common is that they both exist within abstraction, rupture and fragmentation. This realization, as much as erased facts and figures coming to light through study, folds into the territory of no longer accepting the lie. 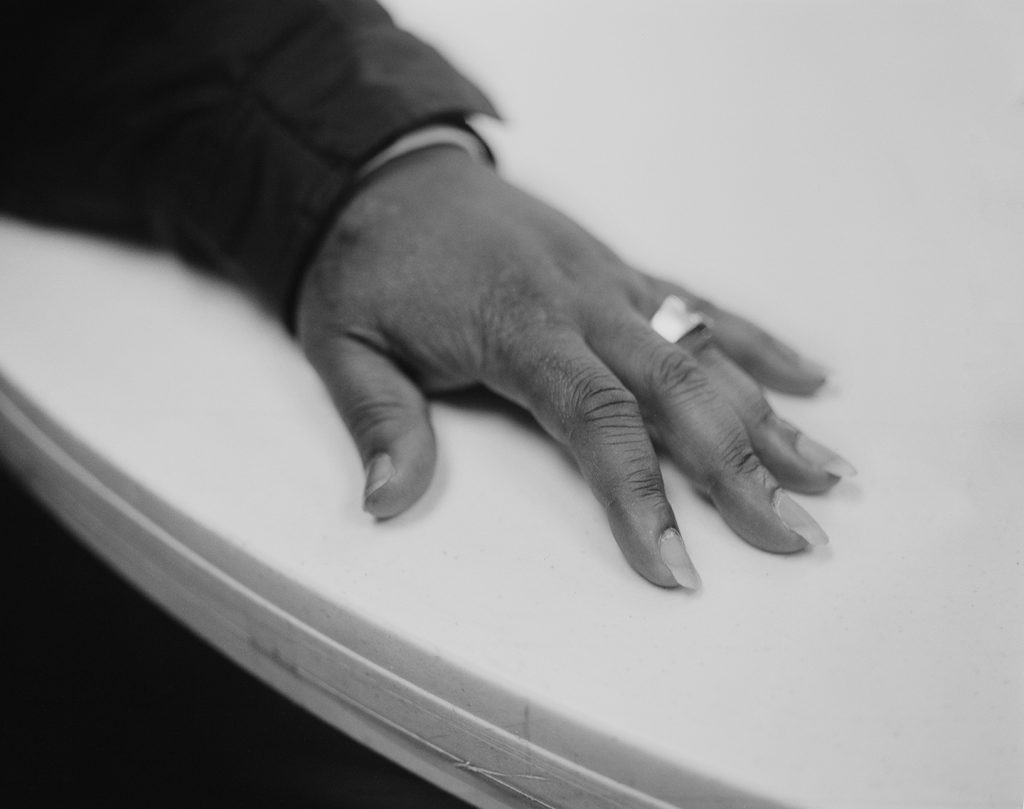 I hesitate to give a compressed version of how the city of Chicago’s mayors, alderpeople and officials, as well as capitalists, made it so that people living in Austin have not and will not attain the Dream. The modes of spatial production that made the Dream only available to a few did so by abstracting relations and lived experiences. The fragmentation of space, of Austin’s neighborhood, can be observed in countless examples of the slicing of space into discrete parcels à la redlining and blockbusting. These spatial fragments, these blocks where Black people live and work, went through processes of legislation that allowed their entry into cycles of capital accumulation circulated between real estate developers, investors, business people and officials. These legal and economic expressions of spatial fragmentation are then reinforced by how disciplines—dare I include artistic practice?—carve up space according to their pursuit. So again I will say, in a society so deeply constituted by abstractions, adding another condensed narrative of violence, trauma and divestment might not be helpful.

Within abstract space, the Black body is divided into particular uses and values attached to them, so that there is a parallel between the ways that “space is … carved up” and how the body is “cut into pieces.” This process is not happenstance, one misguided policy after another, but is strategically pursued by a combined force of political institutions and capitalist agenda.

This spatial abstraction creates a rift of familiarity between the center and the periphery, between the city and Austin. The process of abstracting space, transforming a person or place into data sets, figures of speech and bylines, makes for ethical ease and efficient work when pulling resources from the South and Far West Sides before turning around and funneling community services and development funding into the Lakefront, North Side and West Loop.

Phyars-Burgess came to Chicago two years ago by way of her 2018 Diane Dammeyer Fellowship for the Photographic Arts and Social Issues sponsored by Columbia College Chicago and Heartland Alliance. The latter has many social programs. The fellowship brought her into proximity of two: READI (Rapid Employment and Development Initiative) and Mae Suites. READI is a program which focuses on engaging those that Heartland Alliance finds to be most affected by gun violence, young men, through a combination of transitional jobs, cognitive behavioral therapy and follow-up coaching. Mae Suites is studio housing in Austin and Phyars-Burgess’ work there was made possible by support provided by Sharon Tenard, Mae Suites’ case manager. 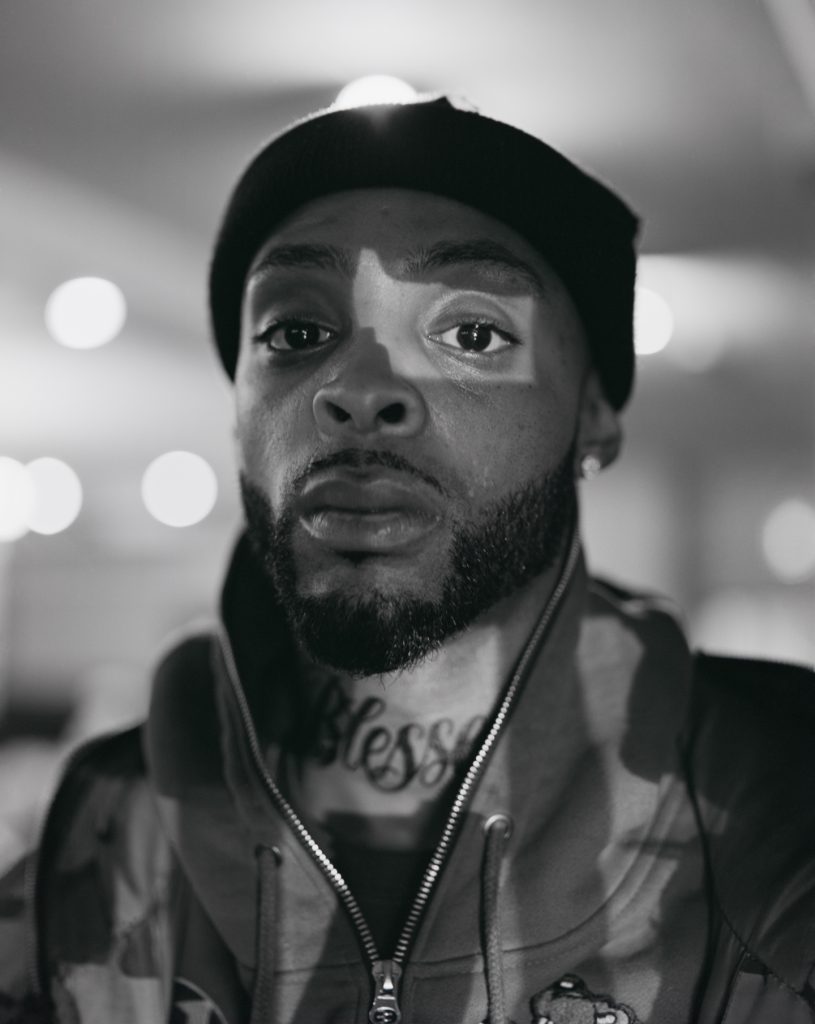 Another group of Heartland Alliance programs includes five child detention centers for unaccompanied immigrant minors under contract from the U.S. Department of Health and Human Services’ Office of Refugee Resettlement in cooperation with U.S. Immigration and Customs Enforcement (ICE). The space here cannot hold both Austin and the psychological trauma alleged against these Heartland Alliance facilities. But it is important to note the relation. Although the Heartland Alliance can do great work in one community area (READI, Mae Suites), in other areas they reinscribe the obfuscating, violent work that created these spaces of neglect in the first place. That is the system and processes by which the Heartland Alliance houses unaccompanied children, the regulation and compression of testimony and biometric data according to the terms created by ICE, is no different than the processes which led to Austin’s current conditions.

As a beneficiary of Heartland Alliance’s support and working alongside their other programs, Phyars-Burgess has questioned her position and complicity within the overarching structure. The answer is still unclear. But the question lives alongside Phyars-Burgess’ work which focuses on those living in spite of an ongoing slow crisis (which has escalated in the midst of the pandemic). Her image-making is a study of living in abstracted space: “I’m fractured, there’s a fracture in the thing that we do, being in these bodies. My skin has made me blank, but my skin has also made me visible. I feel like that sounds like madness, but I’ve been trying to understand this thing. What’s it like to be an abstraction, to be fractured constantly, to be in six different places at once, to be virtual and in reality and behind, and perhaps that is the experience of being a human being. But I think that there is something particular about being Black, that asks of you to be in multiple places at once.”

The question for study here is not quite how do we create a more equitable system that ensures safety and well-being for all; the answer is not as concrete as defunding police and contributing more capital into Austin (although, yes and yes). The question is how do you live in a Black body? After the Black body has reached such a point of abstraction, you could lose your body just by being you, by living. And as much as one might interrogate and challenge the iterative violence on Black bodies and their communities, that question is unanswerable.

How does one apply the tools and practice of art to the study of an unanswerable question? Photography has an empirical value to capture a scene, hold it so that one might look at a fleeting moment, again and again, to find something unseen and offer a conclusive end. But for Phyars-Burgess, photography does not hold historical truths and the work, through all of her study of people living in Austin, does not add black-and-white clarity or defined contours and edges. “I feel like I’m trying to explain something that is unexplainable, which is like what it is to be Black and alive,” Phyars-Burgess says. “I am aware that even in my desire to explain, I’m failing all the time because it’s unexplainable. To be a double negative, a double negative all the time—Black and alive—to be in constant abstraction is to be unexplainable, is to be unreadable. It is to be unintelligible.” 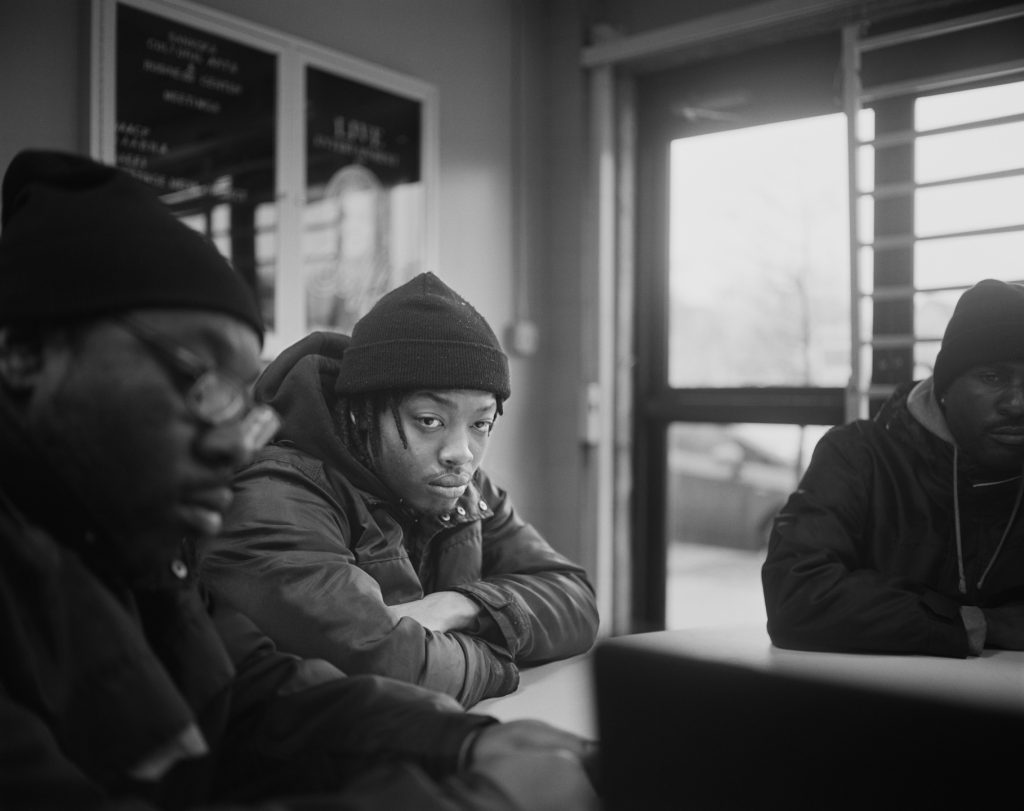 Nonetheless, to dismiss abstract space and reorient wholly toward lived experience would be an overcorrection. The mechanics of photography, particularly the visual language of black-and-white photography lends itself to the idea that it delivers clear truths. But for Phyars-Burgess’ project it is just as much about holding a space of beauty as it is documenting people living. “Sometimes someone just does something and I’m like, damn, that really knocked me out,” she says. “I want to photograph that, like a walk down the street in a certain way. They lean a certain way. They, you know, scratch their head above their eye. Anything.”

The people living in Austin are not included in the canon of beauty. But they look at you, you look at them and they are beautiful. When looking at Phyars-Burgess’ images, it is in the beauty of their bodies, their gestures that a moment of absorption occurs. One’s attention is brought wholly to a point and that engagement produces a space in a way that canonical notions of beauty cannot. This project does not document the truths or lies of Austin’s history and current state. Rather, they hold a moment for one to look at and look at again.

This moment of absorption is the spatial abstraction that Phyars-Burgess produces within her work. It is a moment in which to suspend the fragments of space and the self—yours, mine, ours—so one can see the many fractures and relations that feel intangible and inexplicably linked, the nodes and connections that make it so being Black and alive is a double negative. And in that abstracted space of suspension, one is allowed a moment to look deeply, not to fully comprehend and answer, but “to question what I see, then to question what I see after that, because the questions matter as much, perhaps more than, the answers.” (Stephanie Koch)