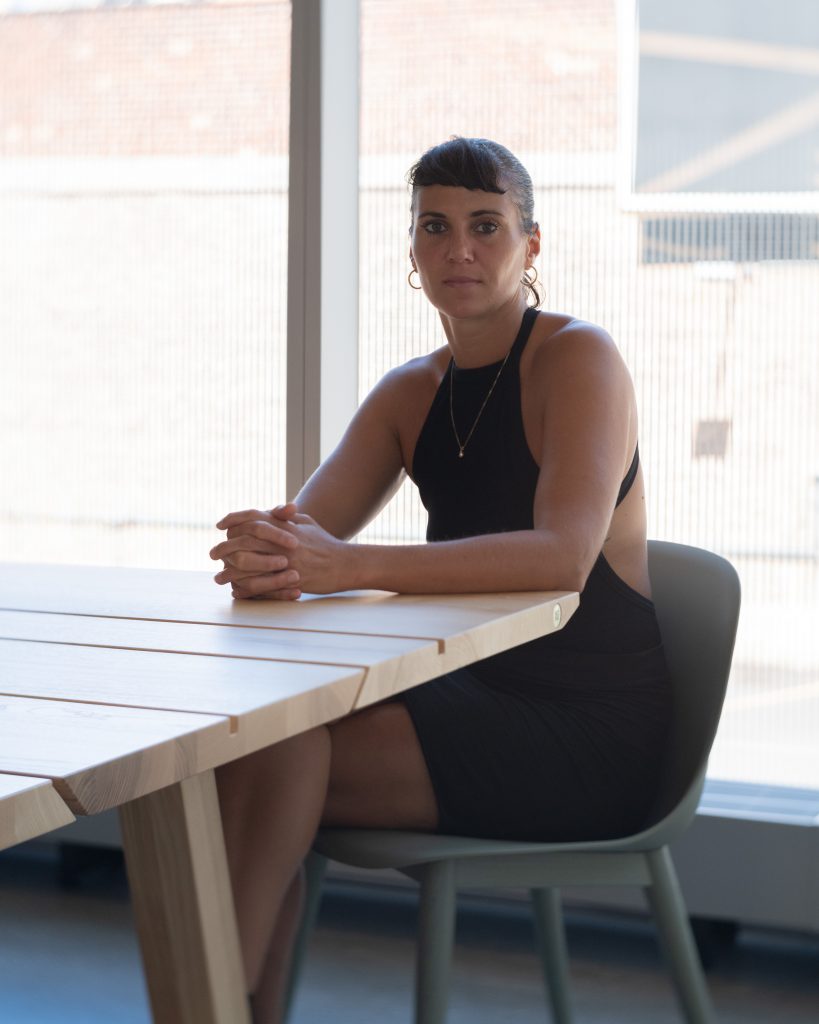 50
Cheryl Pope
Multidisciplinary artist Cheryl Pope took an intimate turn in her work in her 2019 solo exhibition at Monique Meloche. For the artist’s fourth solo show with the gallery, Pope created “paintings” using unspun wool needle-punched into a fabric support, depicting romantic scenes of biracial lovers. It might seem like a stark departure from previous projects, which were more overtly focused on social concerns, yet the Chicago-born artist makes it clear that love and desire aren’t free of societal complexity. Pope is continuing this series, “expanding into some of the complexities that emerge from vulnerability and intimacy.” She will also take part in the MCA pandemic-themed show “The Long Dream,” opening in November. 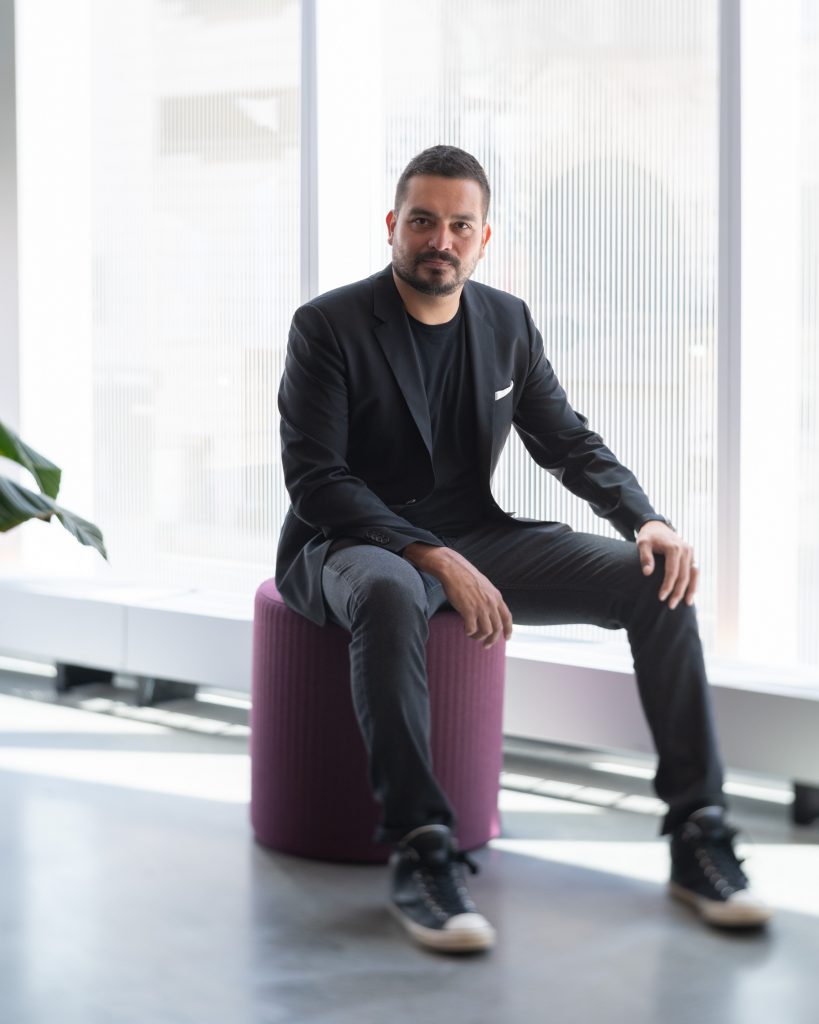 49
Rodrigo Lara
Based between Chicago and his native Mexico, Rodrigo Lara is motivated by the process of becoming, mining personal memories and materials to create work. Trained in sculpture and ceramics, Lara works across disciplines, incorporating sound or drawing to create complex installations. Following a 2019 solo show at Test Site Projects in Las Vegas and the group exhibition “Cross Currents,” shown at the Smart Museum and Centro de Desarrollo de las Artes Visuales in Havana, he is slated to have a solo exhibition at Governors State University’s Visual Arts Gallery. Lara is at work on two projects: “Ephemeral Memorials” takes on the ephemeral nature of tombs in Mexican cemeteries, which families rent for a fixed amount of time, while “Polyrhythm & Paradiddle” presents a “literal and complex twisting of classical portraiture in sculpture.” 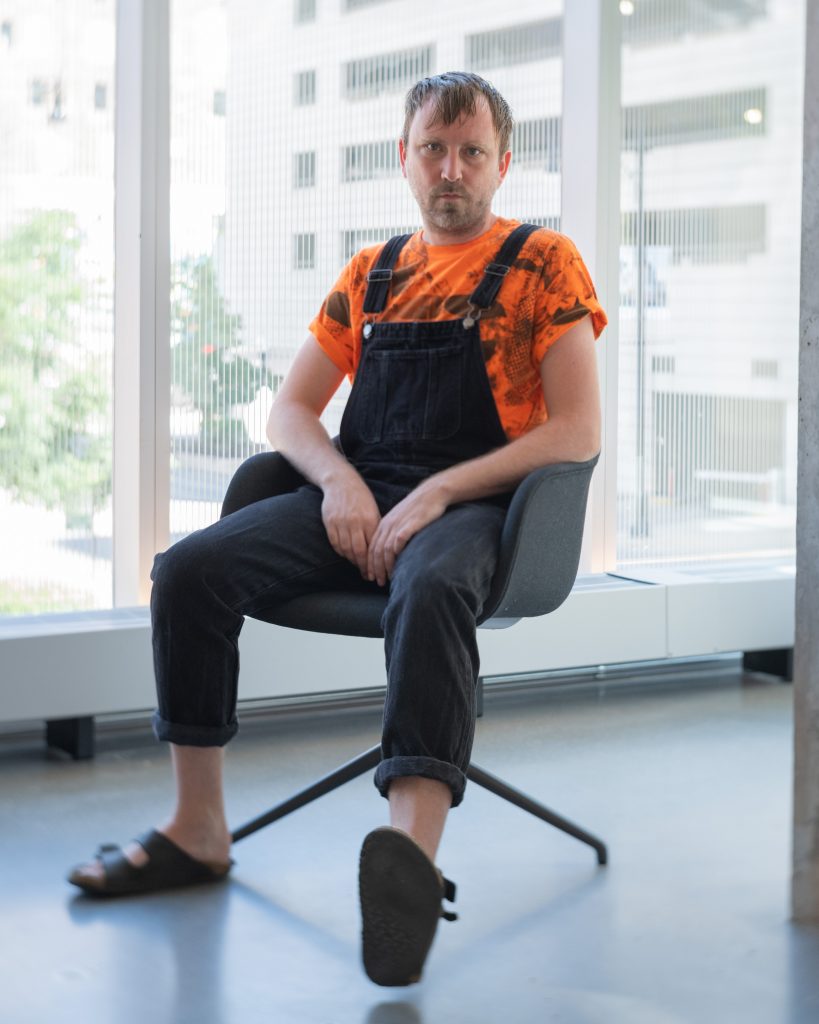 48
Latham Zearfoss
Making a priority of work outside the studio, Latham Zearfoss’ art practice elevates identity formation and place-making for those on the margins. As an organizer for anti-racist collective Make Yourself Useful, they recently were part of a workshop series on direct action for white accomplices in response to uprisings. As cultural liaison for the Chicago Park District, they are working with local artists on the Cultural Asset Mapping Project (C.A.M.P.), an initiative to chart cultural spaces and uplift community storytellers in neighborhoods on the South and West Side. Zearfoss says that “the designation of cultural space, what gets uplifted as relevant, should be determined collectively.” Zearfoss is also a Chicago Artists Coalition 2020 Bolt resident and the assistant director for the non-profit Open Engagement, which supports socially engaged art. 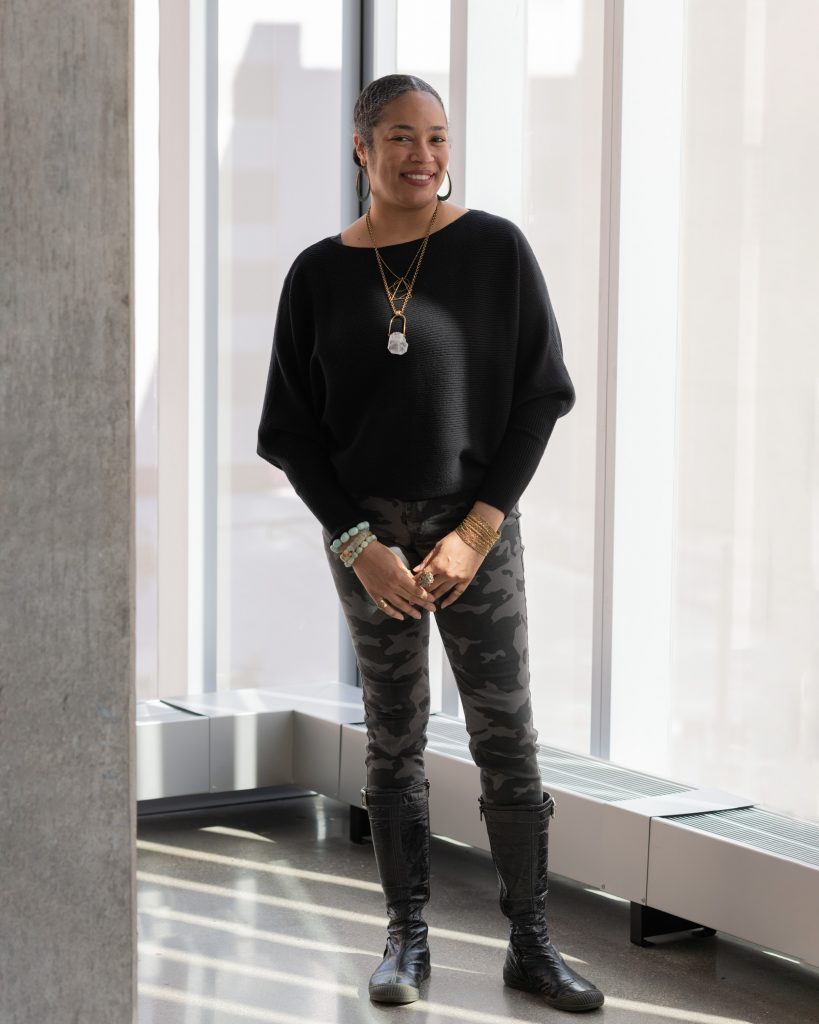 47
Rhonda Wheatley
Rhonda Wheatley leads people on metaphysical journeys in pursuit of health and radical self-acceptance through consciousness-expanding visual artwork and workshops. Since 2015, Wheatley’s exploratory workshops, which incorporate journaling, tarot readings and group oracle performances, have taken place in spaces including Gallery 400 and 6018North and through Creative Capital. Wheatley’s 2017 Hyde Park Art Center solo exhibition included collaged sculptures, the elements of which, including radios, barnacles and telephones, invited viewers to connect with the past, resolve trauma and come to terms with death. Wheatley is deliberate in the selection of her transcendental objects—no item in a sculpture is without deep meaning and intention. Wheatley will soon take part in a hybrid virtual and in-person Loghaven Artist Residency in Knoxville, where she intends to leverage her musical experience to create meditative, mind-altering sound pieces. Wheatley’s work of self-exploration and nurturing is as necessary as ever. 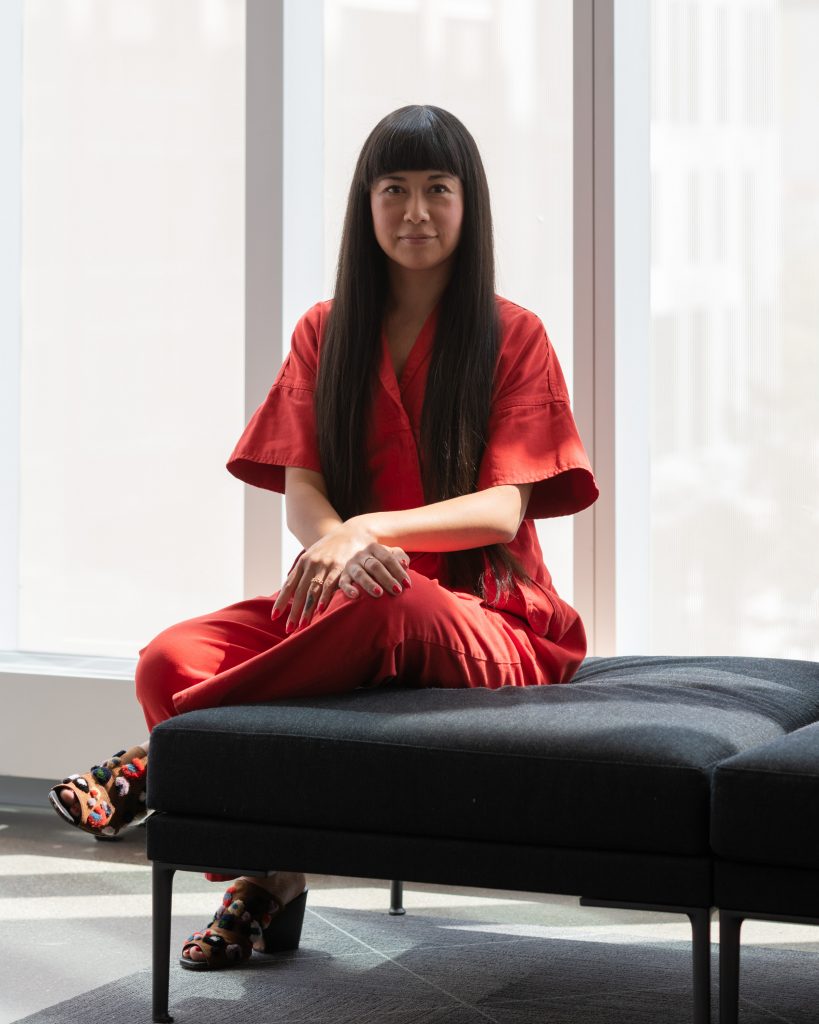 46
Jen Delos Reyes
Jen Delos Reyes has lived many lives since her days in Winnipeg as an organizer, zine maker and band member. She focuses her practice on finding art in the everyday and public engagement. She builds on her role as associate director of the School of Art and Art History at University of Illinois-Chicago, as well as founder of the socially driven conference Open Engagement (which is on pause to assess the needs of the field). In the time away Reyes has explored other endeavors, like long-term care, her role as an arts educator invested in “radical pedagogy, social justice and liberation,” and her residency at the National Museum of Public Housing, where she will spearhead two major projects before the election, one with their Civic Love Campaign and ”Artists in Presidents.” 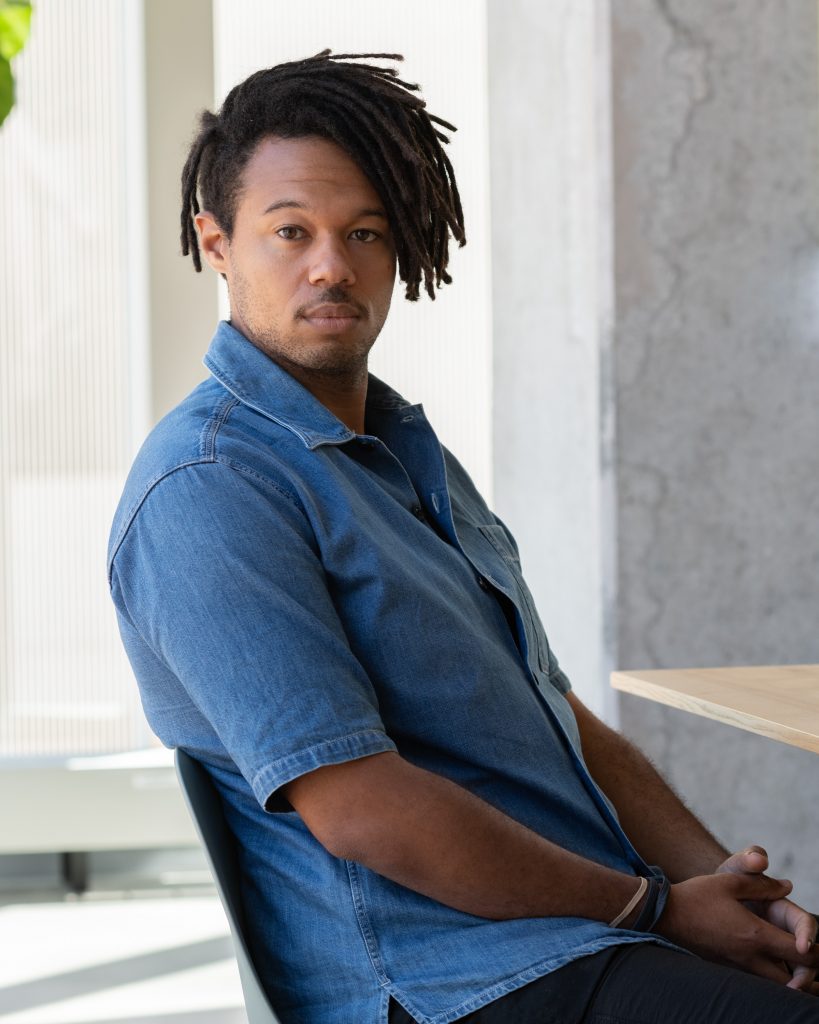 45
Devin T. Mays
Basketballs, Newport cigarette boxes, long swaths of plastic sheeting, Craigslist ads. As Devin T. Mays says, “Things are always materializing when everything is material.” The University of Chicago graduate, whose practice includes performance and highly conceptual visual art, considers his work a shared encounter between himself and the viewer. A 2020 Driehaus Museum Emerging Artist Fellow, Mays has been delving into the moving image. His ongoing, evolving project “All Things are True” is made up of cellphone footage and documentation of past performances. Another project in the works, “The Day I Met The Sun,” joins text and video in a visual poem, drawing from the 1970s TV show “Soul!”

44
Thomas Kong
Kim’s Corner Food owner Thomas Kong makes collages of simple shapes and vibrant compositions. Inspired by the mindful nature of making, the artist has repurposed the store’s leftover packaging to create thousands of paper works, covering the store’s walls and shelves. Kong and friend and collaborator Dan Miller transformed the store’s storage room in 2015 into The Back Room, which is now a repository for Kong’s works and an exhibition space as well as home to The Back Room 2018 residency series. Kong’s collages overtook the “Economic Shop” corner store for the Counterpublic 2019 triennial in St. Louis. In coordination with 062 Gallery, his collages will adorn Hyde Park Art Center’s kitchen as part of the upcoming exhibition, “Artists Run Chicago 2.0.” 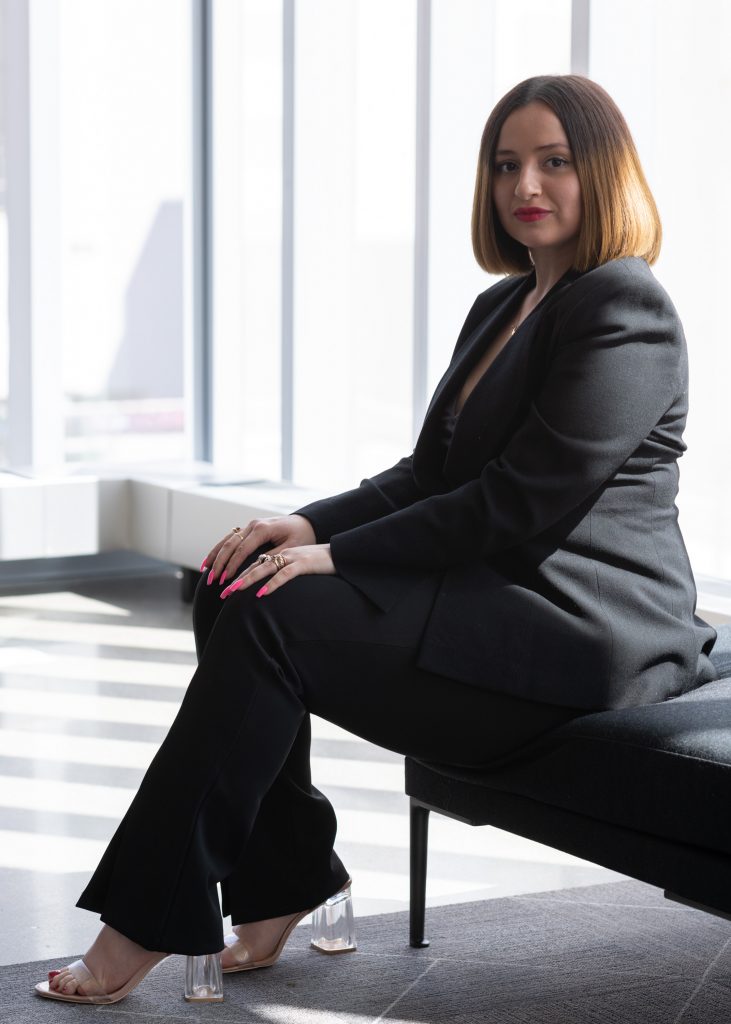 43
Yvette Mayorga
Yvette Mayorga’s work tells “untold stories with frosting through a feminist perspective.” Her vibrantly textured fiber-based work focuses on the layered immigrant experience in the United States, and the violence that comes with it, one of the most pressing social issues of the day. This has deepened her commitment to “rewrite Art History.” Her work into 2021 will traverse art spaces from New York to North Carolina, California and Spain. The DePaul Art Museum recently added her piece, ”A Vase of the Century 1 (After Century Vase c. 1876),” into their permanent collection; Mayorga was also a 2010 Artadia award finalist. 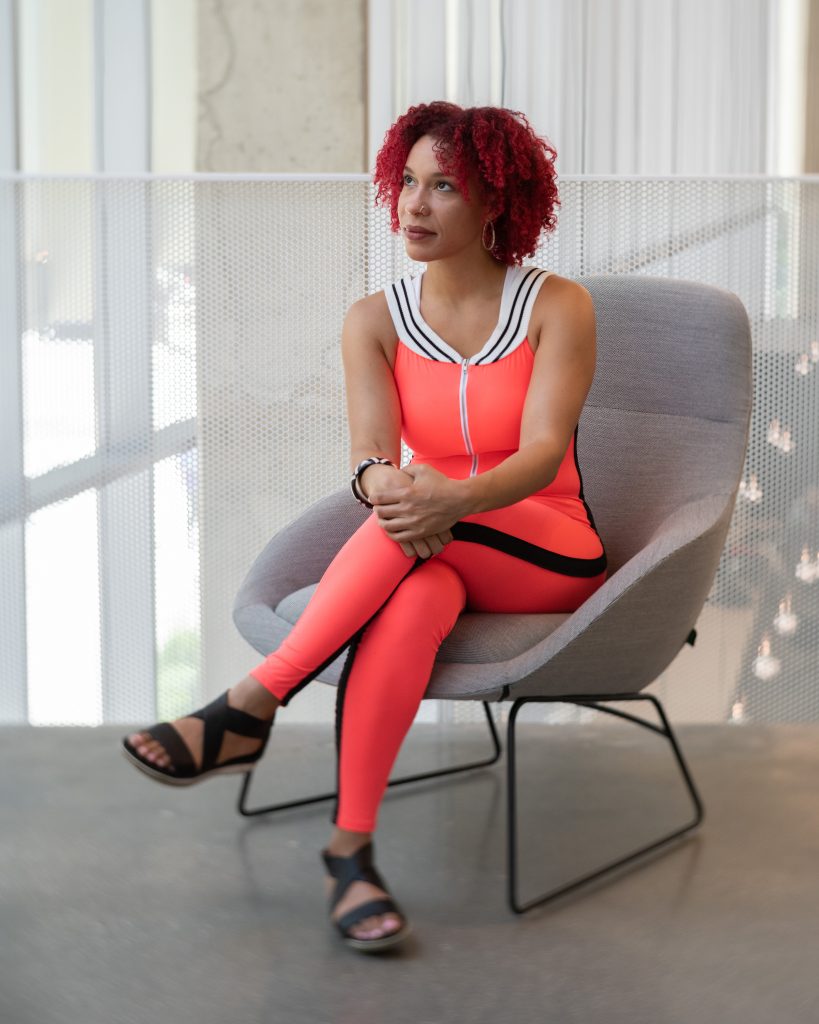 42
Rashayla Marie Brown
According to “undisciplinary” artist-scholar Rashayla Marie Brown, “choosing to be an artist is an exercise in what your priorities are.” Brown’s priorities are made clear (with much vulnerability), through installation design, photography, performance, writing, criticism, video art and film directing. Brown’s work and words have been featured in publications including Artforum, Chicago magazine, Nka Journal of Contemporary African Art, Prospect.4 New Orleans and the cover of the Reader. This past year Brown released “The Court of Public Opinion,” a performance and film project that addresses ethics and financial exploitation—an area Brown has expressed much concern, from her criticism of the art world to Black women’s ownership of their ideas. Brown has been thinking more deeply about reaching audiences beyond the art world. The most natural turn in her practice is dedicating more time to filmmaking; she recently wrapped part two of “Reality Is Not Good Enough,” a project she feels has identified where her real and immediate support systems are. “Reality Isn’t Good Enough” is anticipated to show at film festivals, with a public release in 2021. 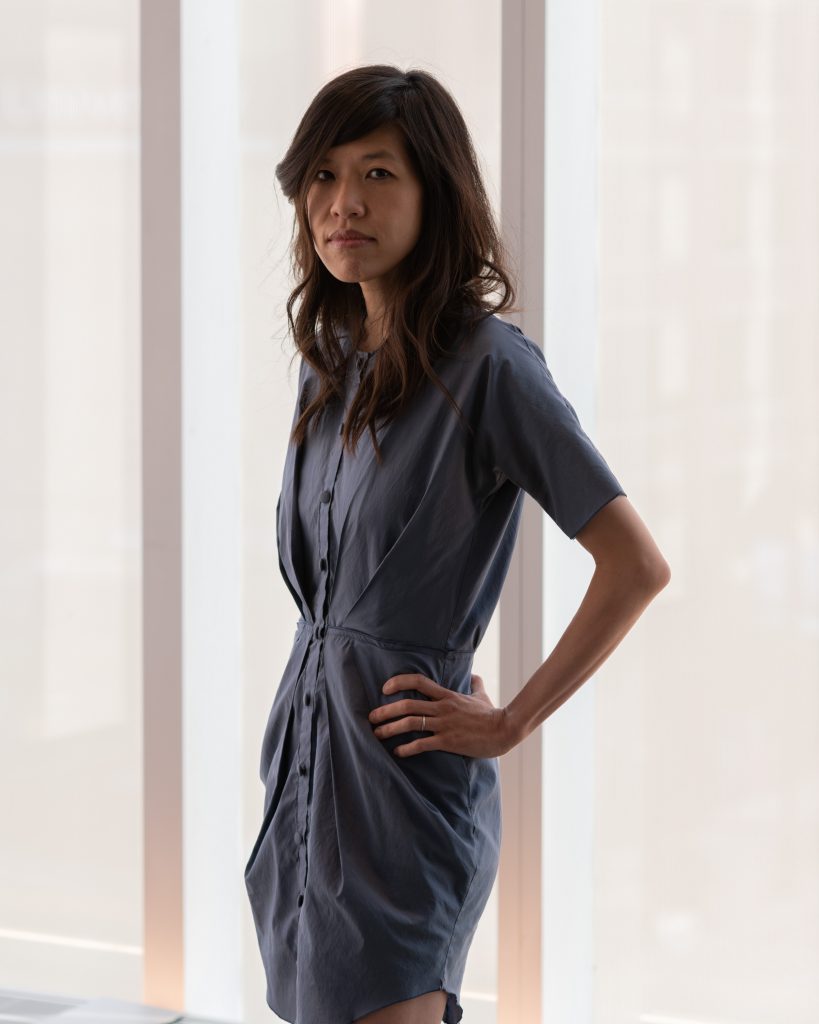 41
Huong Ngô
“From the outside many times over,” interdisciplinary artist Huong Ngô examines history and stories in search of what needs to be pulled into the present, addressing archival silences. Born in Hong Kong, Ngô grew up as a refugee in the South. This year, the hundredth anniversary of the passing of the Nineteenth Amendment, she is contributing to the Renaissance Society’s “Nine Lives,” part of the Feminist Art Coalition, a platform showcasing feminism-inspired projects at museums across the country this fall. For “Nine Lives,” Ngô will revisit an archive of women who were part of the anti-colonial movement in Vietnam. She often works between France and Vietnam and says, “Chicago is a place that didn’t give its full story to me when I first moved here. I had to take the time to learn it. The more I’ve learned it, the more I feel attached to it, and it’s resonated in ways that really surprise me.”

how do I purchase this months’ issue?

You can purchase this month’s issue at https://newcityshop.com/products/september-2020-issue-art-50-fall-arts