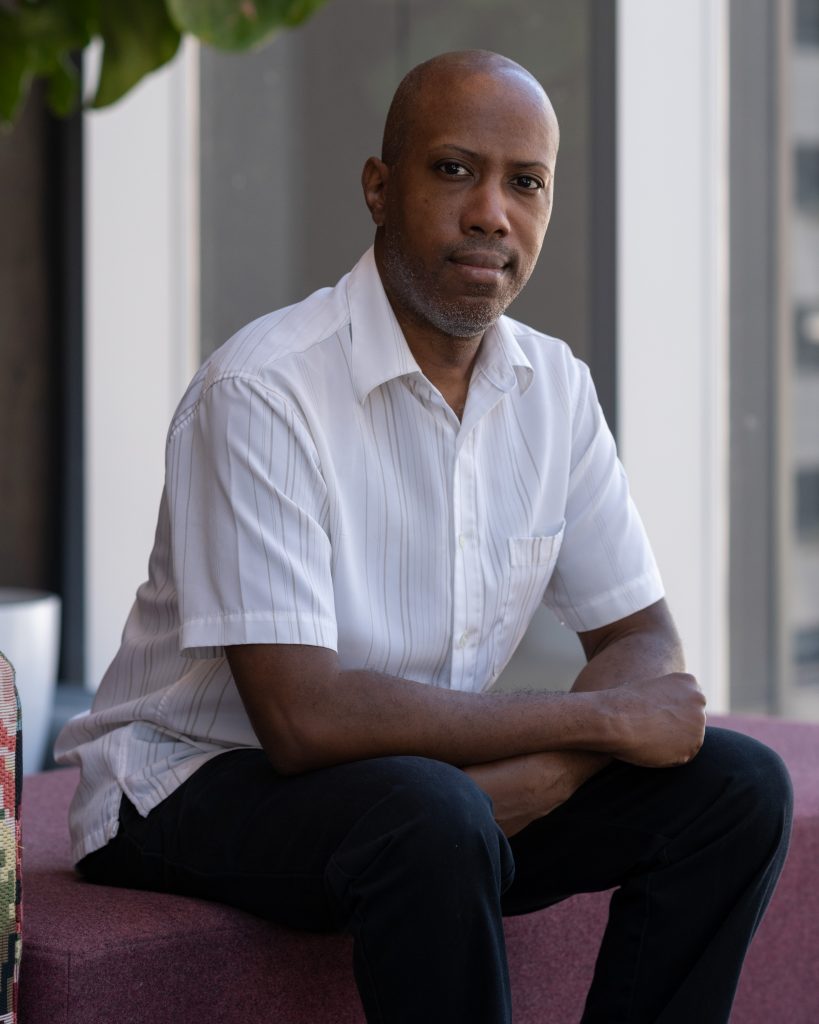 40
Norman Long
Sound artist Norman Long uses his work to connect people with their community, history, culture and ecology. Originally a sculptor, Long trained in landscape architecture at Cornell; he likes to bring the context of landscape into his projects, whether leading a soundwalk, making field recordings or creating a sound map. Recent work has explored sites that are subject to disinvestment, although the natural world continues to regenerate. Long installed a neighborhood listening garden this year at the Jeffery Manor Branch library’s Reading Garden. For several years, he has recorded the sound and followed the revitalization of Big Marsh Park, capturing what resilience sounds like. “African Americans in these communities where disinvestment takes place experience and witness this disconnection to our environment, economy, sense of self and place,” he says. “With soundwalks we are brought back to our bodies, our time and our space.” Long is at work on a live sound piece inspired by the work of Afro-Cuban artist Belkis Ayón and will perform virtually at the High Zero festival in September. 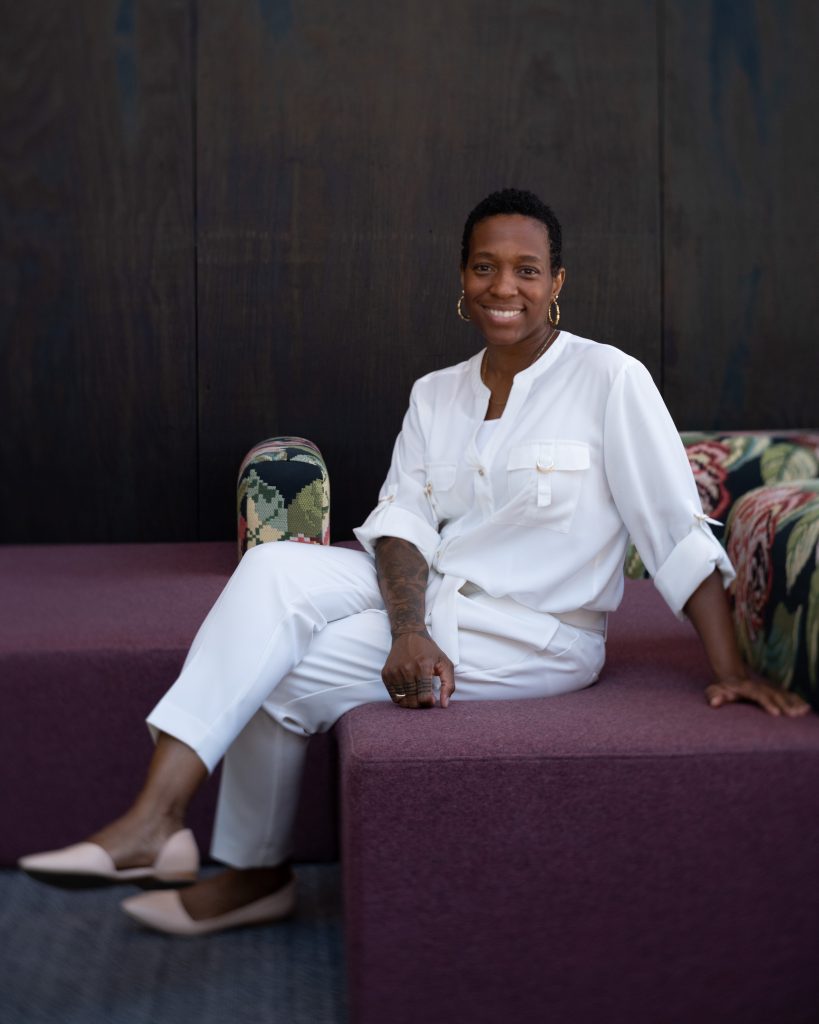 39
Ayanah Moor
For her upcoming solo exhibition at the Cleve Carney Museum of Art, Ayanah Moor is revisiting painting, which the artist hasn’t worked in since the nineties. Moor’s conceptual work incorporates multiple disciplines, often critiquing contemporary pop culture and media, and is situated within the tradition of Black aesthetics. “I let the idea, the questions, lead the form,” she says. The SAIC professor has work on view in a group exhibition at Georgia’s Zuckerman Museum of Art and is creating a public artwork this September on the DePaul Art Museum billboards at the Fullerton El station.

38
Alice Tippit
Alice Tippit likes to pare down her paintings, leaving only a spare amount of visual information for the viewer to parse. An oversized pair of lips, a disembodied limb stretching across the canvas. Her solo exhibition at Patron this summer was named for a type of sea snail known to camouflage itself to blend in with its atmosphere, as Tippit likes to think of language, which shifts meaning over time. Her interest in text was also visible in her 2019 solo exhibition “Still Life With Volcano,” at L.A.’s Grice Bench, which was inspired by the economical lines of Emily Dickinson. Tippit looks forward to a solo exhibition at Nicelle Beauchene Gallery’s new location in October. 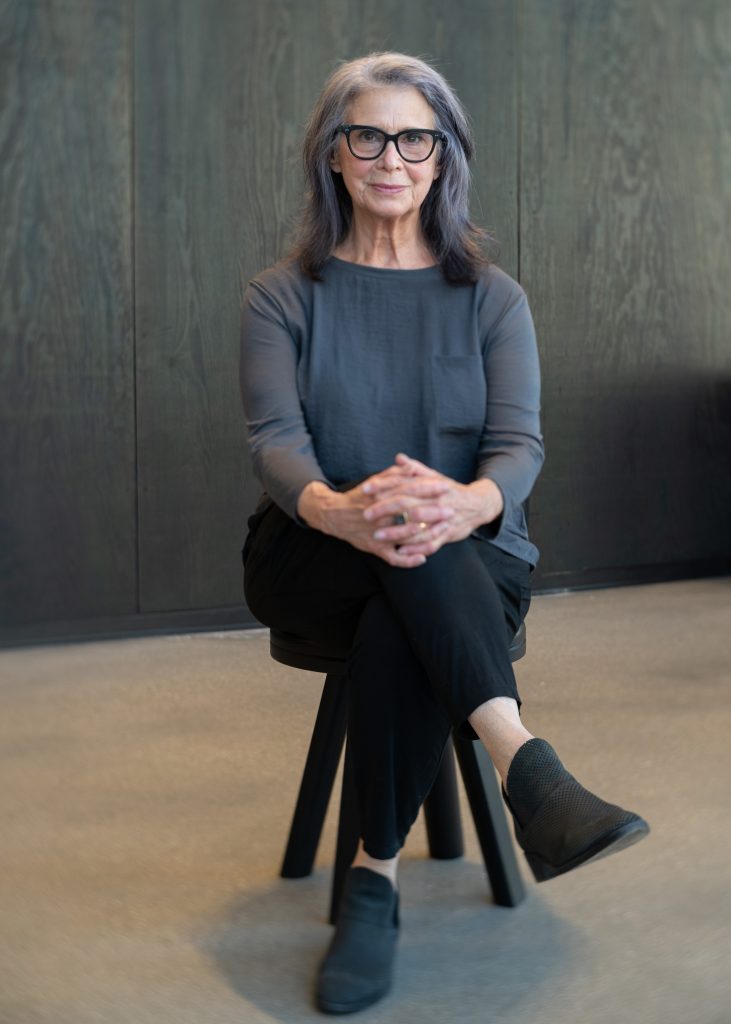 37
Judith Geichman
Judith Geichman doesn’t merely put brush to canvas; she molds her paintings into being, using found objects to scrape and mold gorgeous, expressive abstractions. Now in her seventies, Geichman has exhibited widely in Chicago (Artemisia Gallery, Julius Caesar Gallery, Chicago Cultural Center) and beyond (NADA Miami, Mahan Gallery in Columbus, Ohio, the Evanston Art Center). The artist remains as excited as ever by her practice. “The dance between yes and no, what stays or goes, what’s lost, and found, makes painting feel immediate, vital, alive, and in the moment of right now,” she says. A longtime professor of painting and drawing at SAIC, Geichman will have a 2021 solo exhibition at Regards, where she is represented. 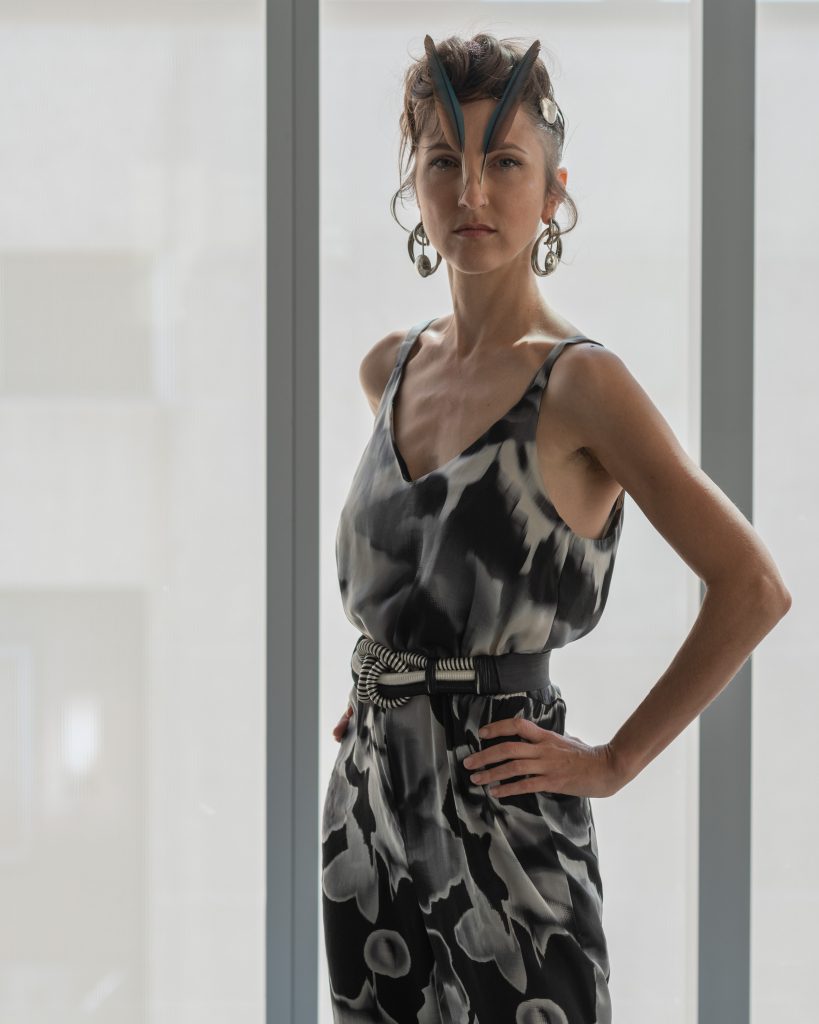 36
Jenny Kendler
Jenny Kendler has mastered the art of leveraging elements from the nonhuman natural world—be it amber, kudzu or a whale’s ear bone—into pieces that draw us to examine the nuances of our surroundings. Kendler’s work is as pervasive as nature itself. Her project “1000 Flags/1000 Waters,” in which blue flags are dispatched to communities advocating for clean water, was featured in the MCA’s exhibition “Water After All.” A selection of sculptures on threatened bird species will be shown at Vienna’s Dom Museum, and “Music for Elephants,” a score played on an ivory-keyed piano that counts the number of elephants poached for their tusks, will be featured in the Smithsonian National Museum of Natural History. Her first museum solo exhibition opens at the MSU Broad Museum in January 2021 and includes a piece that highlights how the structure of venomous sea snail’s shell directly contradicts the theory of intelligent design. As an activist, Kendler takes her works to the streets through movements like Extinction Rebellion, where she incorporates communal art activities into environmentalist nonviolent direct actions. In this moment where the call for social justice is high, she is pushing to articulate the connections between the social and the environmental in support of a unifying movement toward justice. 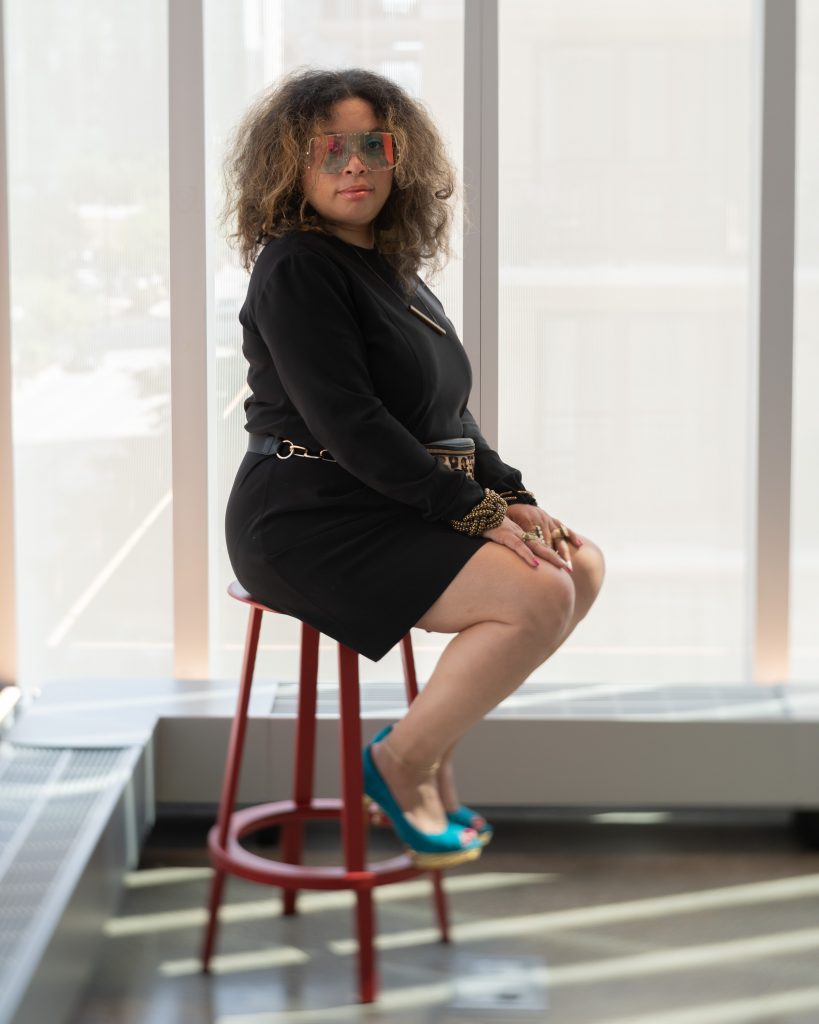 35
Sadie Woods
Sadie Wood’s sonic explorations run deeper than her role as a DJ. Her sound and sculptural projects were exhibited at Heaven Gallery, as a part of The Petty Biennial, which she co-founded with La Keisha Leek. Her solo exhibition “Coyaba” (2019) at Connect Gallery showcased wooden music boxes, original scores and visual representations of movement, memory and family history. Her recent work has engaged public space, radio and social media. “It Was a Rebellion Mixtape” combines music from the civil rights era and speeches to explore “the public expression of Black rage.” She has participated in the South Side Home Movie Project, and most recently the MCA’s In Progress series, to premiere her sonic work, ”Catch These Ancestral Hands.” Her residency at THE cre.ae.tive ROOM in South Shore will allow time for upcoming projects, such as “Party As Protest,” a limited-edition vinyl mix for Aram Han Sifuentes’ Official Unofficial Voting Station, which reimagines voting for all who legally can’t vote. She also continues radio residencies at Lumpen and Vocalo. 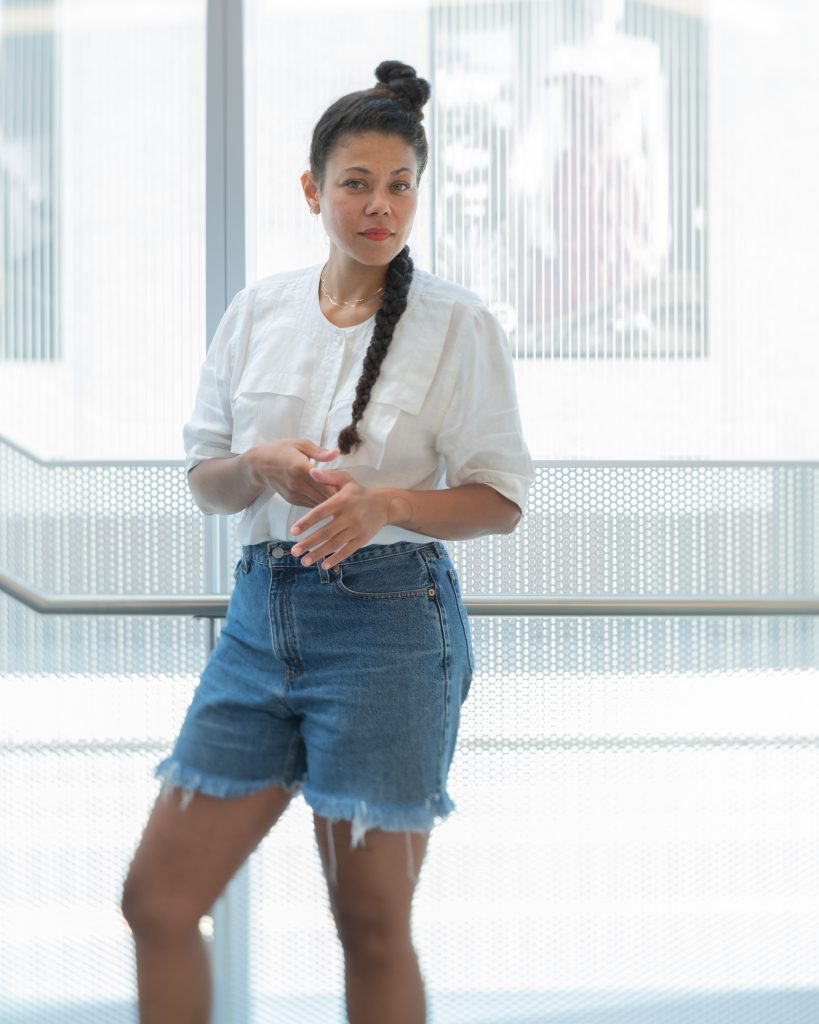 34
Eliza Myrie
The dynamics of power, representation, her Jamaican upbringing, concern and inheritance are at the core of Eliza Myrie’s work, which has vastly evolved since her 2011-2012 Arts + Public Life residency, where she collected discarded pennies for her project “Well.” The 2020 Artadia awardee, known for working with small objects, prints and text, has been exploring large-scale sculpture and performance. “Ring” investigates dominance and submission in objects and humans, and explores the limitations of both. Her 2019 “garden/ruinate” show at The Arts Club of Chicago, where she constructed a gate inspired by the landscape of Jamaica, critiqued literal and figurative notions of security and access when thinking of the politics of the space she was activating. Myrie, who is also the co-founder of the Black Artists Retreat, describes her work as a “continuum” and a “work in progress,” which she is excited to further explore as she prepares for Chicago Manual Style’s ”Four Flags” project, work on her ongoing project ”Sandwalls,” inspired by her father’s stone masonry and a 2021 exhibition at Contemporary Art Museum St. Louis.

33
Deb Sokolow
Deb Sokolow, who believes “everything is in question,” has always been ahead of the curve, confronting the idiosyncrasies of people in power, and the structures and organizations that possess power. In the spaces of her drawings, which typically involve text elements of play, humor, architectural schematics and color, Sokolow finds power in blurring the lines between fact and fiction. In her 2019 solo show “Profiles in Leadership // Drawings without words” at Western Exhibitions, she made a successful turn into abstraction, with her “textless drawings.” Sokolow feels she’s giving herself space right now to make “compelling drawings that don’t involve words.” “You tell people that you’re working really hard on things these days” is Sokolow’s massive five-panel, twenty-five-foot-long artwork, currently on display at Scottsdale Museum of Contemporary Art. Made in 2010, the work is a surprisingly stark commentary on themes relating to sheltering in place and isolation in limited surroundings, which have become all too relatable. 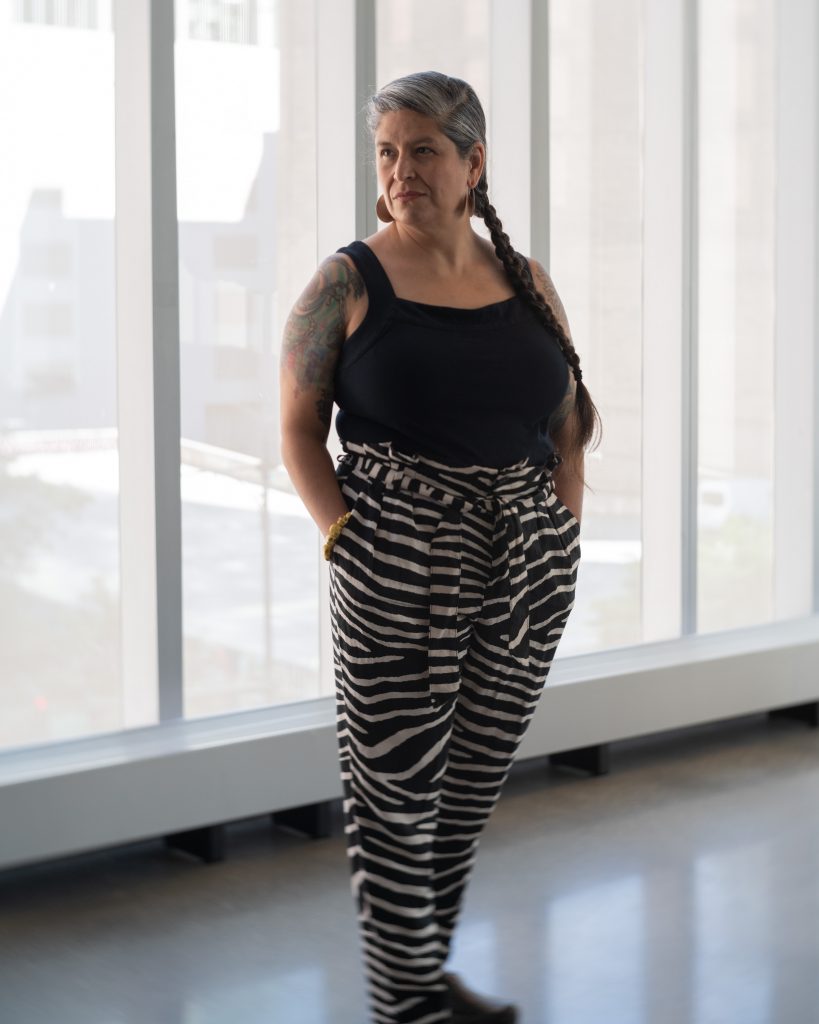 32
Nicole Marroquin
Nicole Marroquin’s research-based practice aims to elevate the voices of women and young people in the fight for social justice. The SAIC professor has focused in recent years on the Chicago Public School student uprisings between 1967-1974; some of that work was featured in the recent National Museum of Mexican Art exhibition “40 Años: La Esperanza.” She is also fundraising for a project, “Raising an Invisible Monument,” an augmented-reality app curriculum that aims to teach Benito Juarez Community Academy High School students about their school’s history. Marroquin, who works across printmaking, sculpture and ceramics, was recently named a member of Justseeds, a cooperative of twenty-nine socially engaged radical artists. 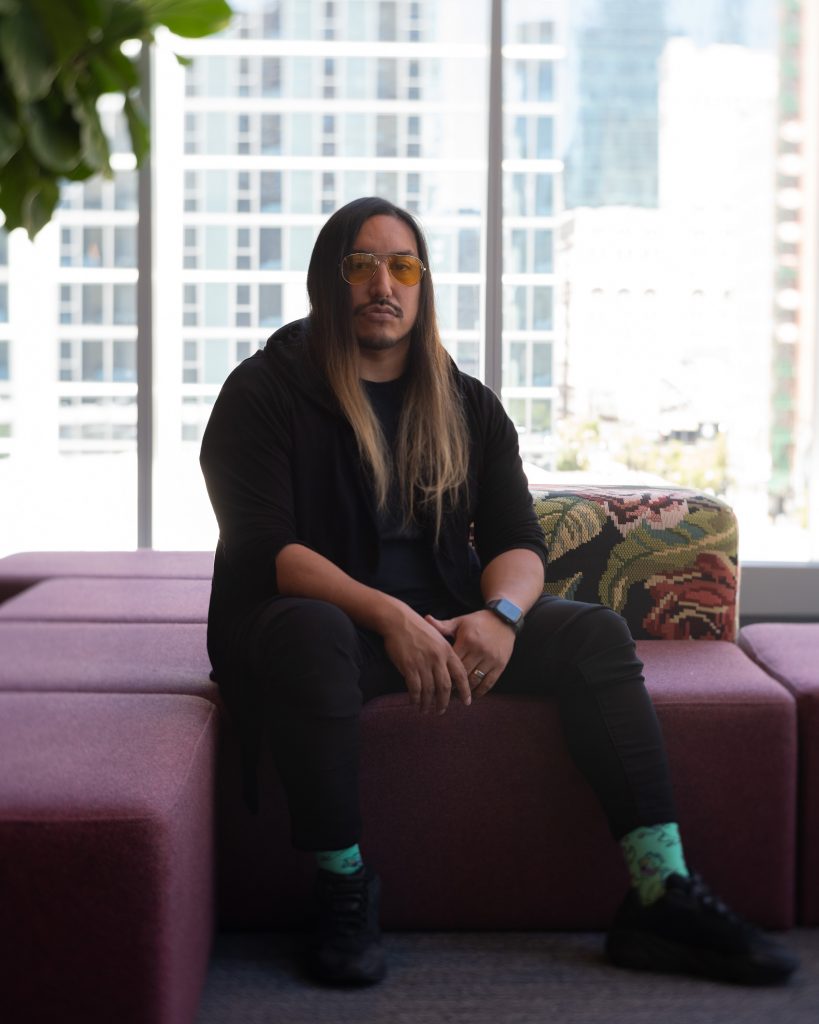 31
Santiago X
Art is a response to an idea, and although Santiago X might not classify what he does as art, he responds to the complexities of living in the United States as an Indigenous person by creating. After leaving a career in architecture, coming to Zhigaagoong (Chicago) was “a catalyst in choosing the medium.” Those mediums take the form of arcade games, streetwear, the earth. In Chicago, X learned of Cahokia, the Indigenous mound civilization that was the largest city north of Mexico in the thirteenth century. A citizen of the Coushatta Tribe of Louisiana (Koasati) and Indigenous Chamoru from the Island of Guam U.S.A (Hacha’Maori), X revived the Koasati practice of mound-building, constructing two effigy mounds as part of the 2019 Chicago Architecture Biennial—the first time such works have been constructed by Indigenous peoples in North America since the founding of the country. X is fundraising to erect a monument for a new future, “The Coiled Serpent” mound in Horner Park, in the hope of unveiling it this year.