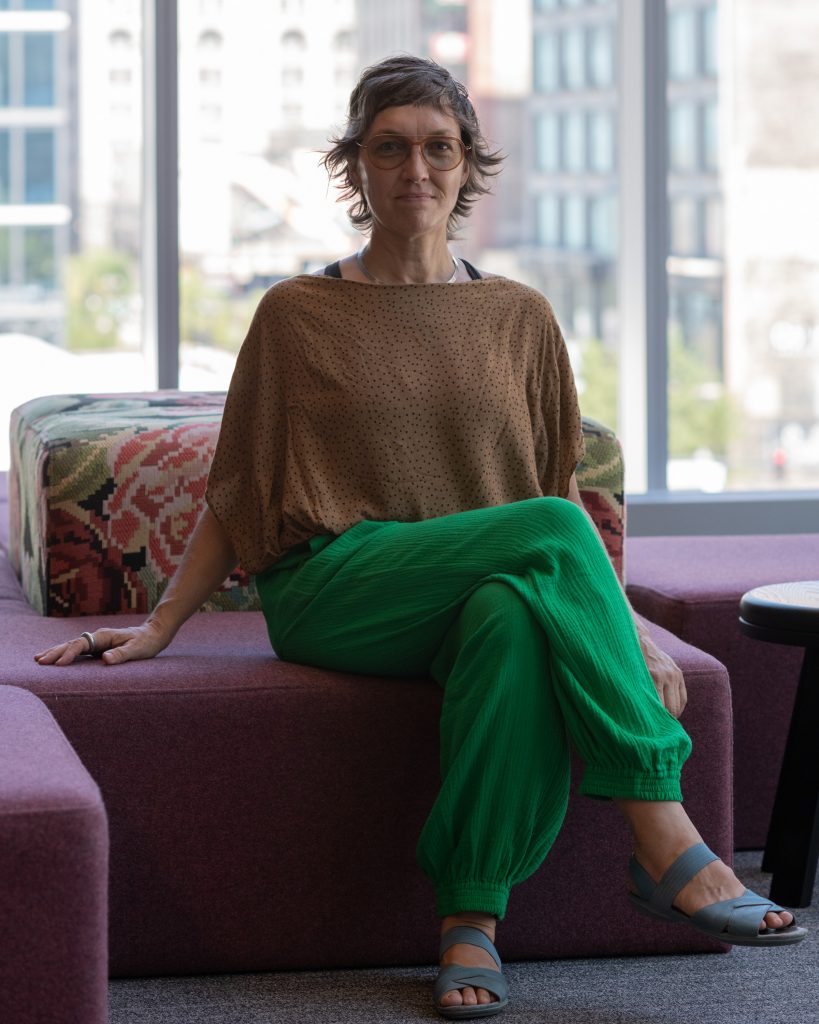 30
Deborah Stratman
Deborah Stratman investigates our connections in societal systems through film and other media as well as public installations. Her most recent film, “Vever (for Barbara),” pays tribute to the late Barbara Hammer, the pioneering queer feminist filmmaker, in an examination of how filmmakers across generations search for alternatives to the power structures in which they are complicit. Stratman continues to find solace in Studs Terkel interviews, a selection of which she has curated for the MCA’s “Chicago Works: Deborah Stratman.” At the center of this exhibition lies Stratman’s 2016 film “The Illinois Parables,” a documentary on Illinois in eleven chapters, or parables, which show histories of settlement and removal, breakthroughs and resistance, and our relationship to the land marked by these forces. In what is a twelfth chapter of sorts, “Feeling Tone” recreates Terkel’s WFMT radio booth. She advises tuning in online to “get a bead on his feel for the times.” 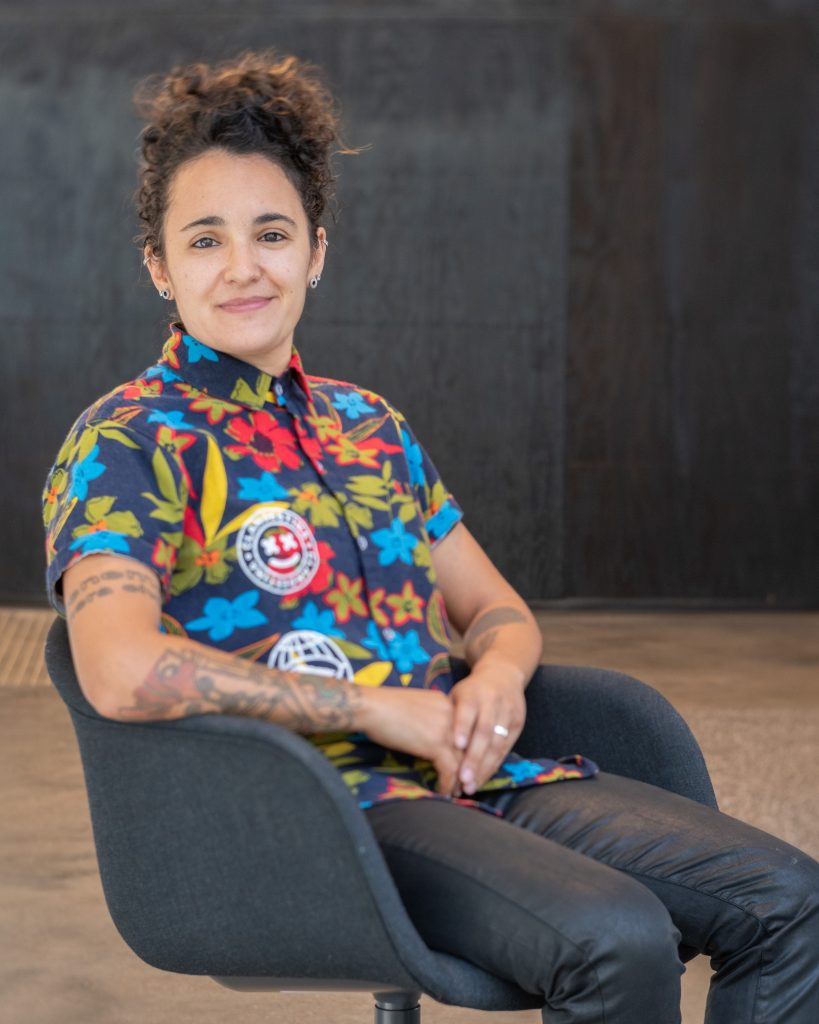 29
Sam Kirk
Sam Kirk has left her mark all over with her murals depicting strong and powerful women, communities of color and LGBTQIA people in her signature multicolored line work and portraits. Her socially driven practice is rooted in her identity as a biracial, queer woman, and her advocacy work which has gained her notoriety. She created a public installation in 2019 in Times Square for World Pride, and a mural in Casablanca, where she was the first woman and American to participate in the street festival, CASAMOUJA. Her work has evolved to “new and uncharted territory,” including working with new media like stained glass, which she took up during her 2019 residency at the Chicago Art Department, and presented in a solo exhibition, ”The Alchemy of Us,” and will show at DePaul Art Musuem’s forthcoming LatinXAmerican exhibition. She is collaborating with writer Rosie Thor on illustrations for her first full-color children’s book, “The Meaning of Pride,” and filmmaker Michelle Collins, on an animated short. 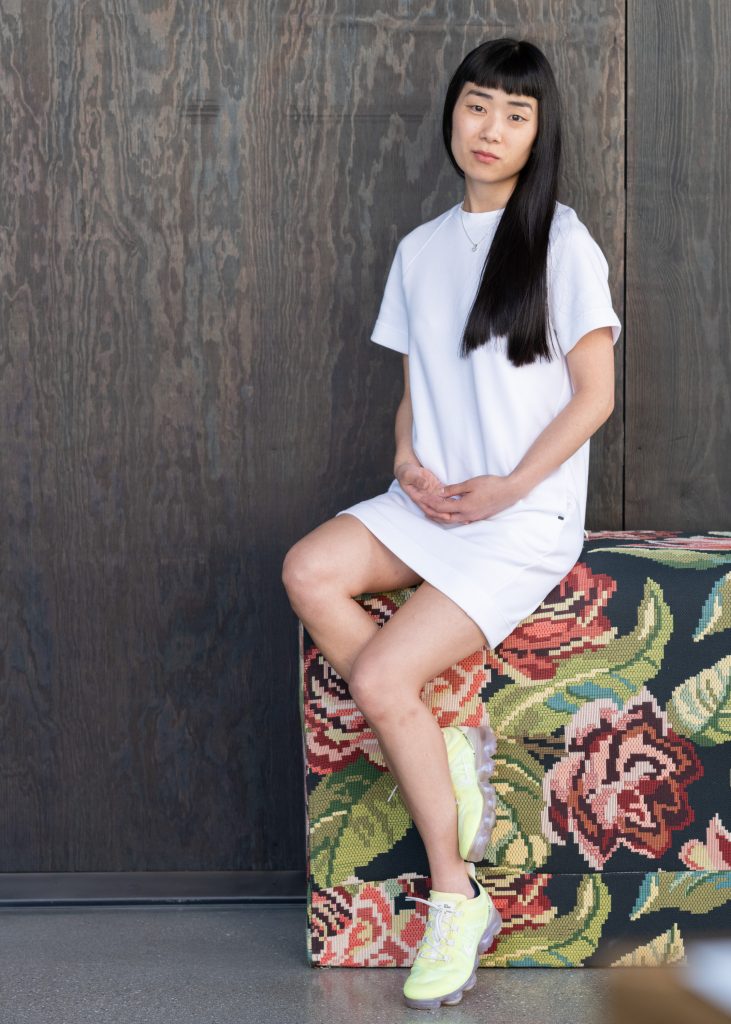 28
Mika Horibuchi
Mika Horibuchi’s paintings are forgivable violations of our expectations: watercolors made from oils, curtains that cannot be drawn. “The point isn’t to trick the viewer, necessarily,” she says, “but to reveal the tricks that are happening.” She uses trompe l’oeil as a conceptual framework to set her hyperrealistic works in contexts that seem slightly off, puncturing the artifice of the art world by first showing she is one of its most fastidious students. Within a year of receiving her BFA from the School of the Art Institute, in 2013, Horibuchi co-founded 4th Ward Project Space, a noncommercial artist-run exhibition space in Hyde Park. While her joint Richard H. Driehaus Museum show with fellow Chicago artist Nate Young, slated for earlier this year, does not have a date, she has been working on smaller and smaller drawings, which seem to shrink as time skips forward—although her small works still take ample time, her practice is one of patience: “It comes from a fun place for me, joy from the craft of it.” 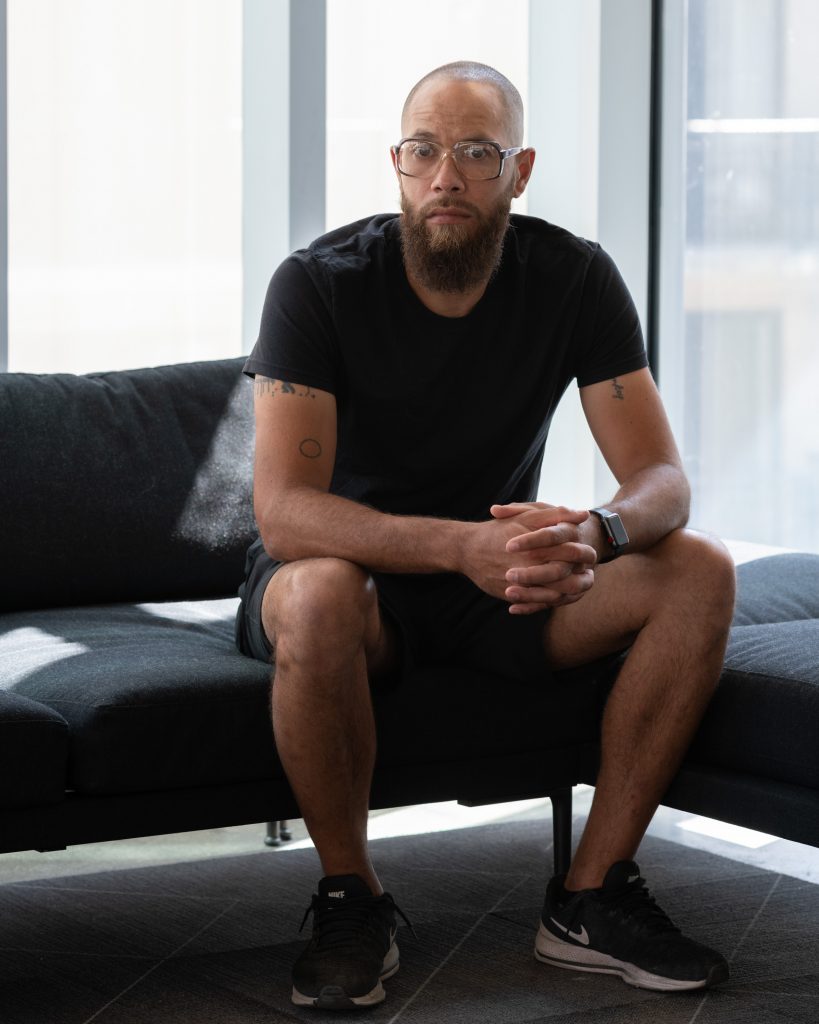 27
Nate Young
Nate Young’s work investigates the “frameworks and structures that exist to inform belief or make belief possible,” according to the announcement for his recent exhibition, “The Transcendence of Time” at Monique Meloche, which used aesthetic tropes from religious imagery to communicate ideologies of form, memory, belief and identity. Young sees himself as “a conceptualist, very invested in craft”; he has used materials such as wood, horse bone, graphite and dirt to explore his own family history, memory, states of fugitivity and “collapsing time.” Young presents the work as a parallel to his grandfather’s migration from North Carolina to Philadelphia. He was recently commissioned by the Driehaus Museum’s “A Tale of Today” initiative to build new works to fit into the interiors and architectural design of the building, which will also explore his grandfather’s migration story and will be on view when the museum reopens. In exploring his grandfather’s narrative, Young also plans to ride a horse along the same migration path. 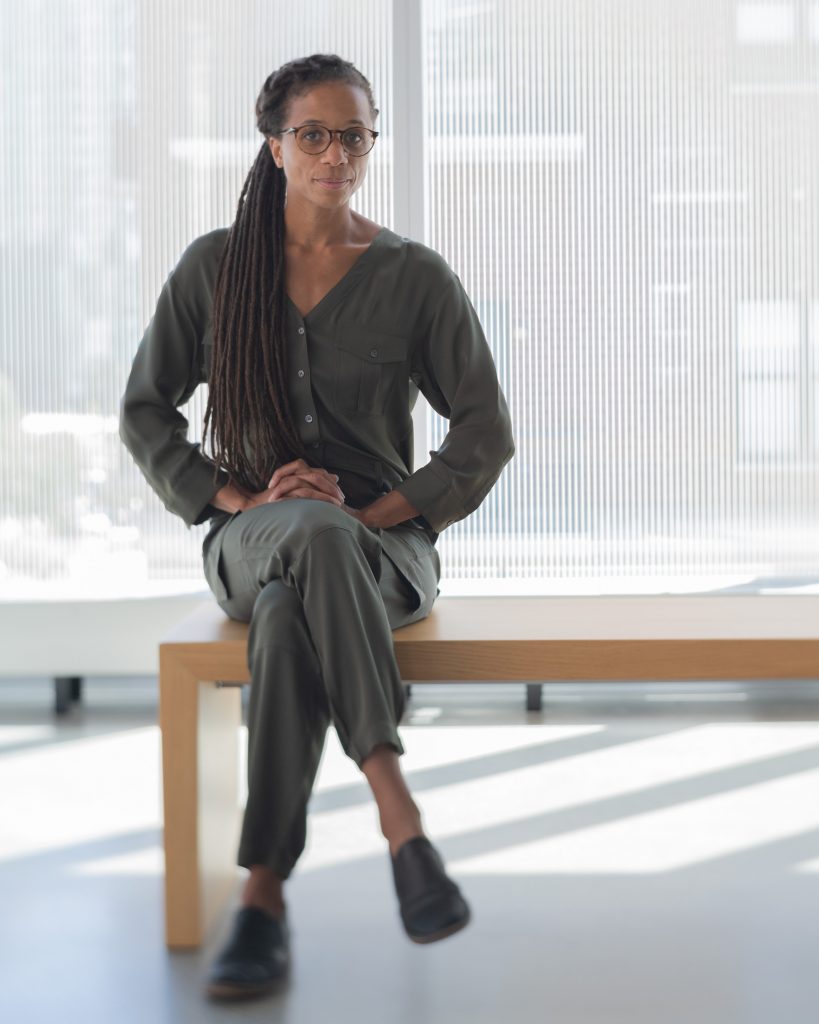 26
Jina Valentine
Teacher-mother-activist-artist Jina Valentine’s work spans a compelling spectrum, often questioning the fallacies of text. “Explication de texte” takes the phrase “shot my son” from a New York Times article, and magnifies and layers it hundreds of times, demonstrating how language fails to express the grief of the murder of Black men. Valentine’s works often convey maddening data in intense and compelling ways. “Literacy Test: Rorschach” uses iron gall ink to present the form of the gerrymandered electoral districts in North Carolina. She’s at work on a research project sponsored by the Graham Foundation, “The Exhibit of American Negroes, Revisited,” that considers W.E.B. Du Bois’ drawing series visualizing data about Black life in 1900 in relation to contemporary data. Expect to see this work at Columbia College’s Glass Curtain Gallery. She also uses text to inform us about overlooked histories. Her book “Ticket to the Unknown” draws on work and writing from the Art Brut movement, and through Black Lunch Table, a movement she co-founded that fosters discussions around cultural history and social justice, she hosts Wikipedia edit-a-thons to create more histories about Black artists. Her work is a necessary expression of the knowledge we need. 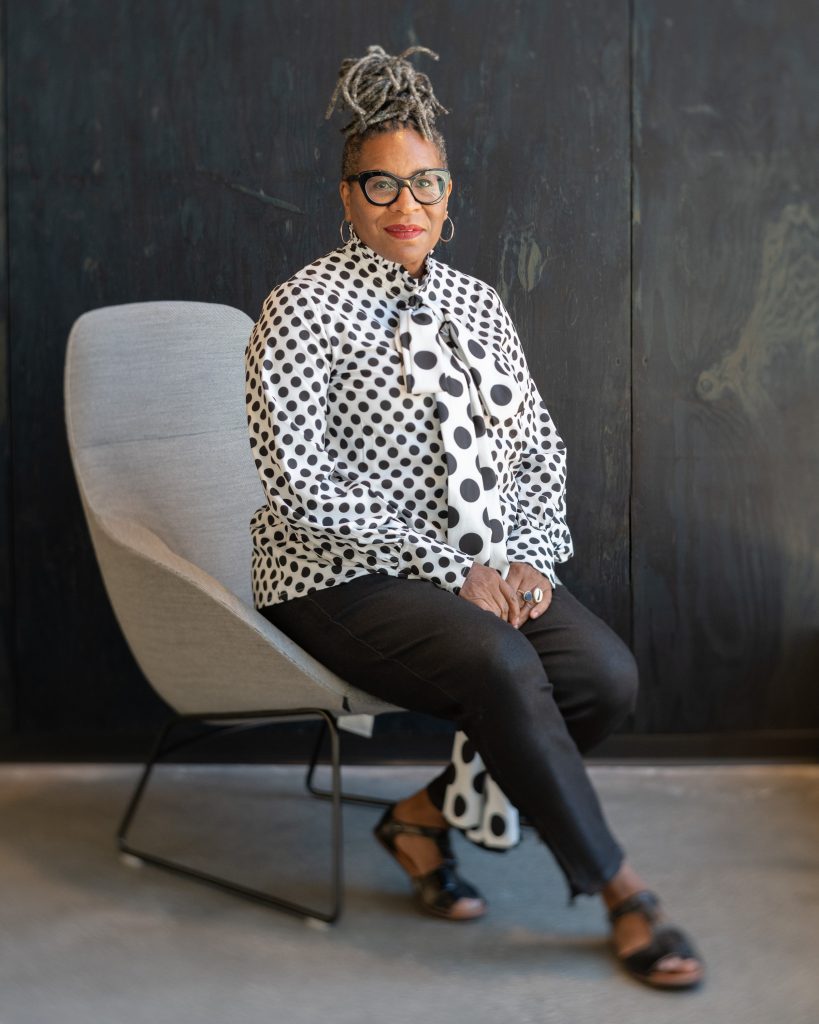 25
Folayemi Wilson
After a two-decade career in two-dimensional design and art direction, Folayemi (Fo) Wilson turned to 3D, studied furniture design and art history, and began making new forms and spaces. Her 2019 “Dark Matter” exhibition at Hyde Park Art Center expanded the setting of Southern vernacular architecture to new realms, not only centering the hypothetical occupants, likely Black Americans, but presenting a possibility of a celestial world of healing. Her community-centric work has been possible in Chicago, where she started blkHaUS studios with Norman Teague in 2016 to use design as an agent of change to uplift marginalized communities. Now she has migrated her studio to her backyard and has been working with writing. As young Black designers organize in the struggle for racial justice, work she has already done in the past, she is ruminating on the value of writing her stories on “piercing the wall” to be a maker. “I’m re-evaluating what I have to contribute and the ways I can put that into the world.” 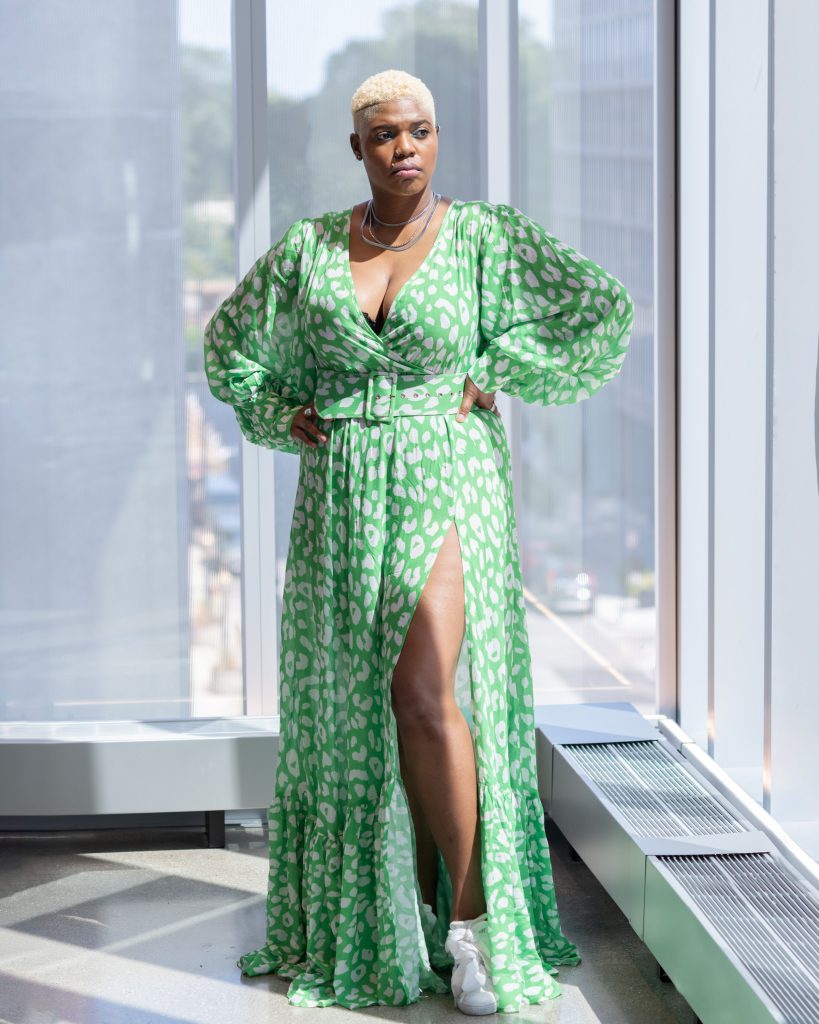 24
Ebony G. Patterson
Ebony G. Patterson lives in Chicago and her hometown of Kingston, Jamaica. This dual existence gives her the distance she needs to create seductive, Eden-esque works that immerse viewers in color and pattern, but also within questions about history, memory, geographies and gender. She builds lush wonderscapes through video, assemblage and other media that feel fantastical yet inviting. Her most recent exhibition, at Duke University’s Nasher Museum of Art, the culmination of a multi-venue tour, was put on pause but can be explored online. Patterson has upcoming exhibitions across the United States and Europe, including solo shows at the Contemporary Art Museum in St. Louis and Kunsthal Aarhus in Denmark. 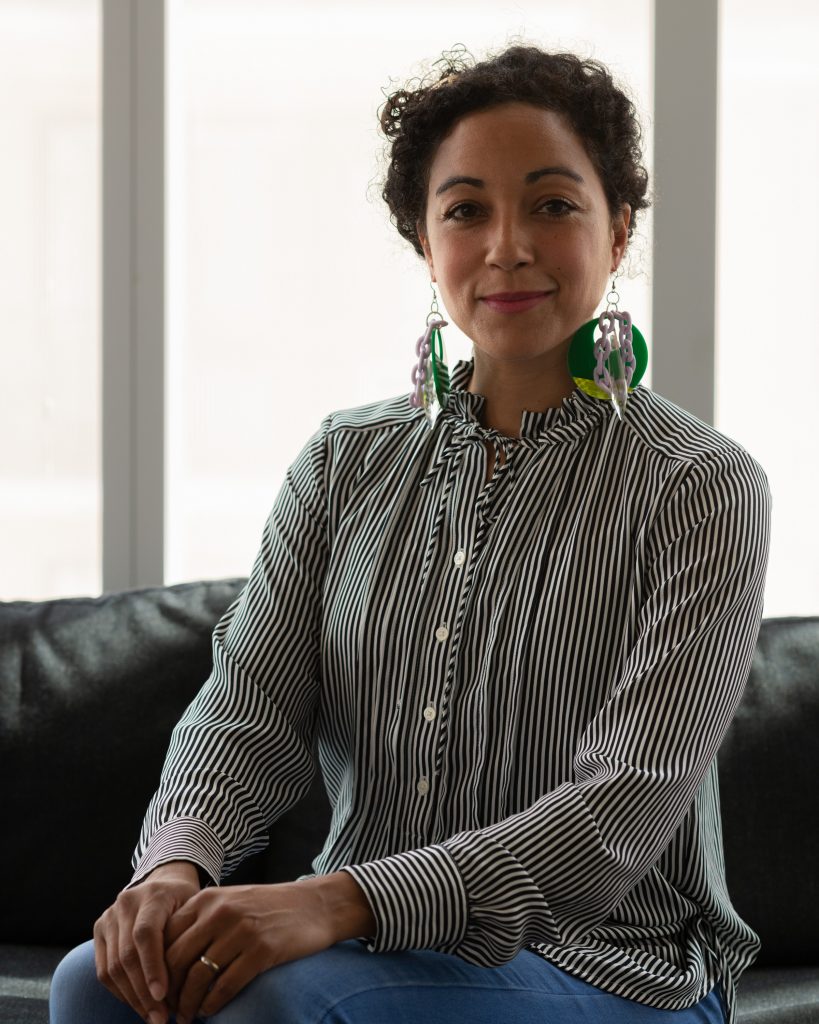 23
Caroline Kent
This 2020 Newcity Breakout Artist is operating at full capacity. Following solo exhibitions this year at Hawthorn Contemporary and the TCNJ Art Gallery, Kent opens a new solo endeavor in September at Chicago’s Tiger Strikes Asteroid. Titled “Victoria/Veronica,” the artist will show drawings, paintings and objects that explore an autofictional narrative of twin sisters. The 2019 Artadia awardee will have her first solo exhibition in November at L.A.’s Kohn Gallery, where she gained representation earlier this year. The show will include large-scale paintings, all sporting Kent’s signature black background, referencing coded language and boundless space. 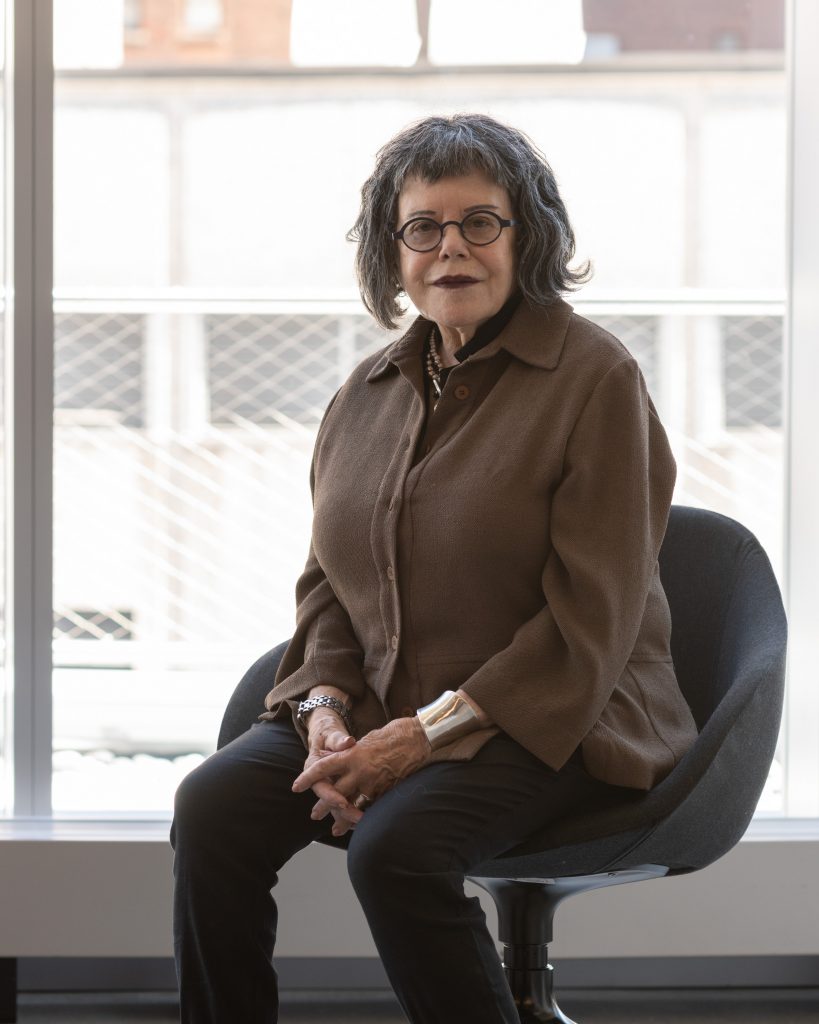 22
Phyllis Bramson
Over the course of a five-decade career, Bramson has pushed figurative painting to its limit with her vibrant, over-the-top fever-dreamscapes. A 2019 solo exhibition at Zolla/Lieberman Gallery and her curation of the widely praised group exhibition “What Came After: Figurative Painting in Chicago 1978-1998” demonstrate that Bramson hasn’t slowed down one bit. During the pandemic, she created a set of paintings, on view on her website, that reference romantic and sexual tropes, art history and Eastern mythologies. She has a 2021 solo exhibition at the Lubeznik Center and is continuing her role as an advisor to MFA students at SAIC. 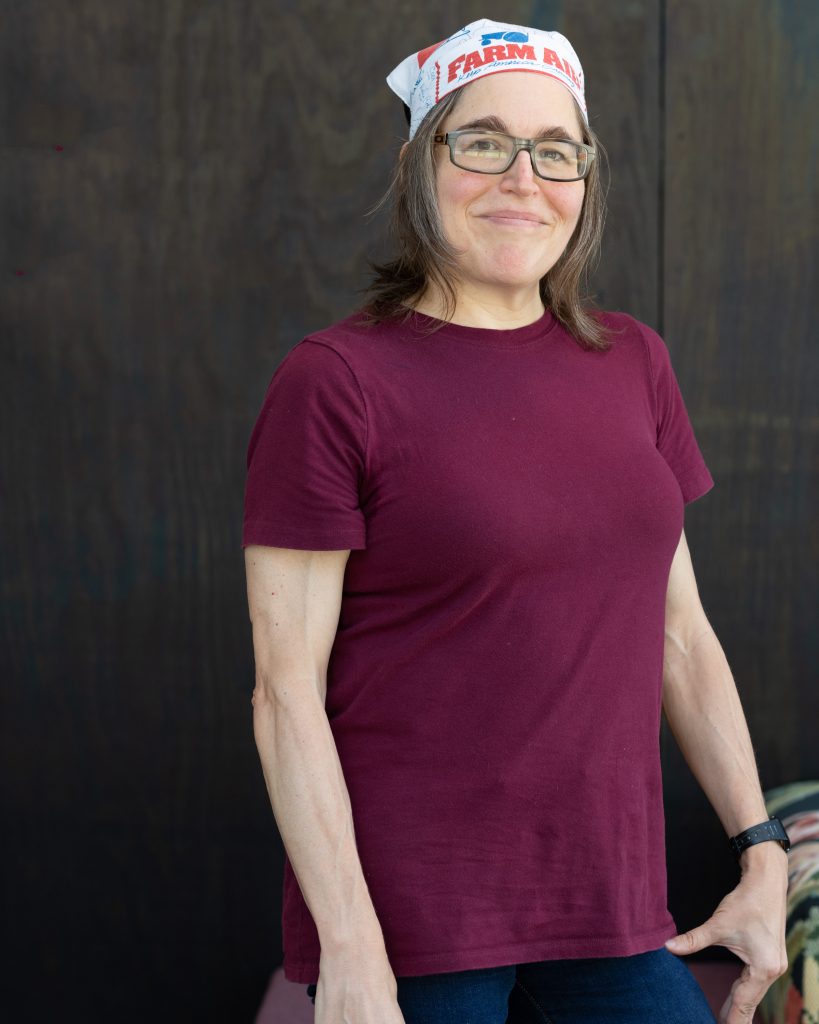 21
Laurie Jo Reynolds
A policy advocate and artist, Laurie Jo Reynolds has long worked to shed light on the failings of our criminal justice system. Perhaps best known for her work with the group Tamms Year Ten, which successfully shuttered Illinois’ Tamms Correctional Center, Reynolds is now focused on the housing crisis caused by public conviction registries and residency restrictions. The UIC professor is currently working in coordination with the Chicago 400, a group of people with past convictions who are experiencing homelessness and subsequently have to register weekly at Chicago Police Headquarters, to organize for policy change. An exhibition with the Chicago 400 opened at The Drawing Center in January and will move to Trinity Christian College. A recipient of a 2018 Art for Justice Fund award, Reynolds also co-leads the ongoing project “Photo Requests from Solitary,” which was featured in the New Yorker last summer.