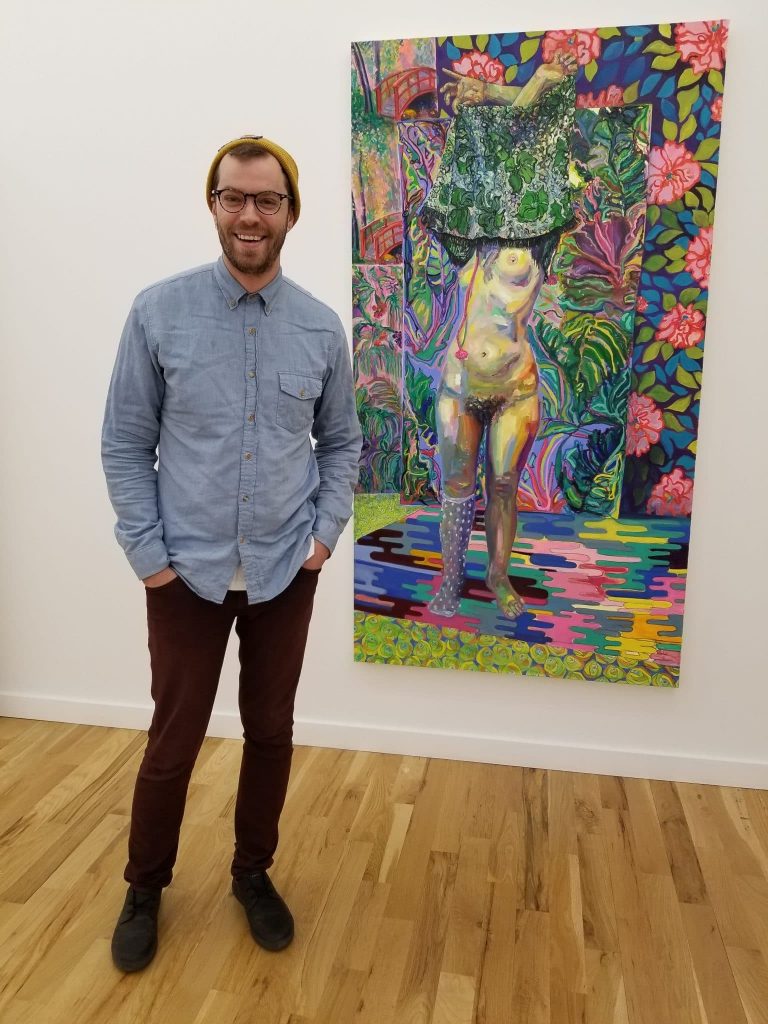 I’ve been winding my way through Chicago’s spasmodic art scene for nearly eight years. I’ve attended countless openings and closings, artist talks, press previews and every type of art fair imaginable. I’ve seen a lot of good art, at least as much bad, and a preciously slim slice of truly outstanding work. Through it all, I’ve been struck by how many people it takes to keep the ship upright. Not just artists-of-the-month and gallerists, but handlers and painters, preparators, conservators, adjuncts and the like. Hundreds of unsung heroes, all on the hustle. All trying to find a way to make it.

But when so few artists actually get shows, let alone sell any work, what does it mean to make it in Chicago? Reasonable people can disagree, but a steady paycheck tied to something art-related is probably a good place to start. A steady paycheck with health insurance? Even better. With that in mind, I sat down with longtime gallery-hopping companion and art handler Tom Pekovitch—a hustler extraordinaire—to find out what “making it” means to him.

I met Tom in 2015, when he was a student of mine in a nine-month MA program at Eastern Illinois University. I remember our first studio visit vividly. On the wall: a wildly diverse selection of paintings. The air filled with academic talk about art and capitalism, and later, a healthy dose of laughter. Behind the laidback veneer of a reformed pothead in slim-fit jeans, Tom was a curious, obscenely well-read individual whose knowledge of modern and contemporary art is nothing less than expansive. His work ethic is unsurpassed and we’ve been friends ever since.

How did you get into art? Were you always interested in a life of it?

I was always interested in drawing, but I didn’t get into art in any kind of serious way until I took a painting class at McHenry County College with a professor named Matt Irie. I first attended NIU for a degree in computer science, which I quickly dropped out of. But that class with Irie changed my life in a significant way. It was the first time I remember being interested in something that someone was teaching. I’d never experienced that before, so I went all in.

In 2011, I transferred to Illinois State University and got a BS. I was told I didn’t have what it took to enter the BFA program, which seems funny now, because most of the students who got in are now doing graphic design or nothing related to art at all. I basically ditched all of my academic courses and just went to the art classes. All of the teachers seemed to encourage it. After that, I got the MA at Eastern Illinois University where we met.

A lot of artists I know opt for bartending and temp work as a way to make ends meet. I don’t think I’ve ever known you not doing something art-related. Was that a conscious choice?

I don’t know how conscious I was of making a choice. I think it was more like desperately trying to tread water, and keep the dream afloat. I’ve always forced myself down a path that allowed me to be surrounded by things that I’m interested in, even if that wasn’t the easy choice. I also used to think that if I didn’t exist in the community that I wanted to be a part of, I wouldn’t be able to succeed in it.

After I got out of grad school, I interned for a contemporary gallery in Roanoke, Virginia, called Alexander/Heath Contemporary. I got paid in tubes of paint. While in Virginia, I applied to a bunch of jobs, literally everywhere. Anything art-related, anything I thought I was remotely qualified for. I eventually landed a job back in Chicago at the School of the Art Institute of Chicago as a gallery preparator. That’s the gig that got me started.

Four years later, I realize that you don’t need to work in the field to exist in the art world or make art. You can provide for yourself a lot better if you stay out of it and just make your work on the side. No need to get hit by a car on your way to a job that doesn’t pay shit.

Yeah, tell me about that.

After SAIC, which was just a contract job, I got a job [at an established art handling company]. I was crossing the street on Augusta and Damen, in the crosswalk, with the right-of-way. While I looked away for a second, there was a pickup truck turning right on red. He was sneaking into his turn and he hit me. After he made contact, he accelerated his truck. I was almost dragged completely under before he realized I was there. I hobbled to the sidewalk, and then the driver just took off. That wasn’t the worst of it.

I broke two fingers at that job, and fell off of a ladder fifteen feet in the air. When I busted my fingers, the owner had me work the rest of the day, and when I fell off the ladder, he just stood over me and didn’t even help me up. And then told me he didn’t have any workers comp when I asked to go get a physical, and of course, no health insurance.

There would be these weird pop quizzes about art handling, it was fucking crazy, and no matter what, I was always broke.

Eventually, I couldn’t take it anymore and I split. Between jobs I picked up some side work at a Goodwill in the suburbs where, ironically, I came across a Giacometti print on sale. I don’t think they knew what it was and I bought it that day.

They say “it’s a small world” and everywhere we go it seems like someone knows you.

It’s because I was at SAIC for a while and there are just an absurd amount of students that come and go through there. I’ve also worked for enough places that I can go to any opening and see a handful of people I know.

It seems like all the handlers and preparators in the city work together at some point. You’ll see everyone working to set up at EXPO, for example. Also, people are always moving company to company, because that’s usually the only way to get paid more, or get better perks or whatever.

I think of your job at The Conservation Center as a good one, were you pumped to get it?

At first? Not really. They initially offered me temp work, and I said: “No, thank you.” By then I had had enough, and I figured it was just going to be one of those art-handling companies that just abuse their workers and pay them virtually nothing. Then they came back with a permanent staff offer.

And I’ve seen incredible stuff with them. I’ve been in the apartment of a major collector with ties to the Art Institute of Chicago—and that was nothing less than amazing. He had a Sol Lewitt drawing on one of the walls, a Donald Judd on another and a Calder on the ceiling. Also a whole hallway of small drawings, hung salon style: Giacometti, Stella, Reinhardt, Serra, you name ‘em, they were on this wall.

One of the coolest things I may have ever done was installing a Giacometti on a wire above a bathtub, it looked amazing and was quite unique. I’ve worked with Monets, countless Dalis, Calders, Miros, Warhols and Kerry James Marshalls.

Do you think handling all that gave you special insight into things?

A very many things that I am grateful for. Much of them practical, like how works need to be displayed. A lot of artists don’t think about that, which is odd considering everyone is making with a public in mind. It also gave me insight into some things that aren’t so great.

A lot of the things you hear people bitching about are just that, people bitching. But in my experience, some things ring true. A lot of collectors, or let’s say, people with a lot of disposable cash, have pretty bad taste.

A few months ago I was on a job on the West Coast packing up works for conservation that had been damaged by wildfires. In the home of a famous movie star, there was an unbelievable amount of bad art. A lot of it was just total Pottery Barn crap and two days later, in the home of a well-known actress, I saw the same exact work! I mean, these people aren’t David Geffen, but they could at least afford a Rauschenberg or two.

Closer to home, I’ve been disappointed to see that a lot of galleries fill up their exhibition seasons with recent grads from SAIC or UIC. These schools suck up all the oxygen in the city and distort the art scene.

Since I installed a lot of student work while I was at SAIC, it’s frustrating as hell to see the same work hung at well-known spaces a few months later. Especially because I know artists like Chris Hyndman who’ve been in the city for years making great work, but haven’t had a lot of traction. I don’t know how students even get shows at these galleries.

Speaking of the art scene, you also make work and try to get it out there. Has working jobs that keep you in regular contact with galleries and collectors ever been a source of tension?

If anything, I go back and forth on where, if anywhere, I actually fit into the art world. I feel confident saying I have a good eye for work, I’m not an “art is subjective” type. I know why I like things and can usually express my thoughts definitively. Being an art handler is great training for that.

But then do people see me as an art handler rather than an artist? Or take my work less seriously because of it? I’m not sure. I don’t see it as a source of tension. I wish I had gotten more shows out of it, but you can’t exactly show a collector your work on Instagram while hanging a Matisse in his hallway.

It’s funny, because I definitely thought of you as someone who “made it,” and we’ve been talking about this profile for a month or two and then when we sat down to talk, I noticed you checking your phone more than usual. A few hours later, boom, you got a job in New York City. Did you think you could stay in Chicago longterm? Did that ever look like a viable future?

I think it’s pretty unlikely for someone like me to make a living in the Chicago art scene, which is one of the reasons why I left. I’ve been on the grid for a few years, and only within the last twelve months did I feel like I was making some headway. People get lucky and land curator spots in the right gallery or museum, and art handlers always want to get full-time at the Art Institute. But I’ve talked to people who have the best positions and they don’t seem especially happy to be getting paid what they want either.