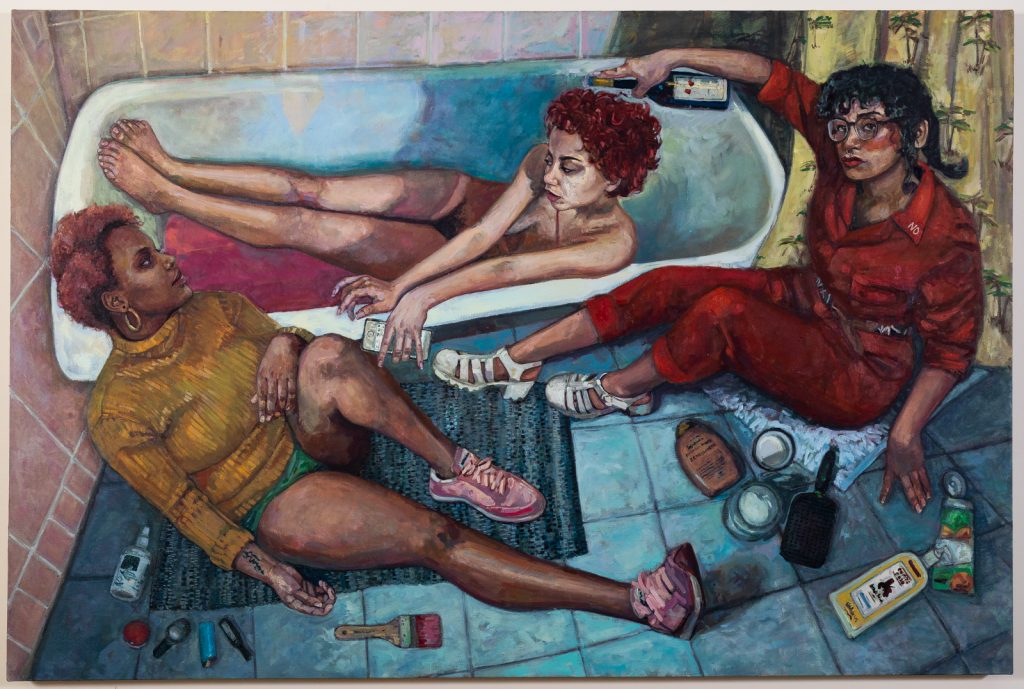 Not much really happens in the paintings of Ariana Vaeth. They are domestic, infused with calm and quiet whimsy. Within this realm, Vaeth has created ambiguous, surprisingly powerful painted narratives.

This exhibition marks a significant formal leap for this young artist. She describes a woman’s world, a milieu of friends who talk, flirt and fancy each other’s company. It is celebratory and insightful.

Vaeth is a prominent fixture in Milwaukee’s art scene. She received a prestigious Mary L. Nohl Fund Fellowship as an emerging artist and was featured in the Wisconsin Triennial at the Madison Museum of Contemporary Art in 2019.

The strengths in these paintings have much to do with composition. Vaeth has locked in gestures and angles, bringing a forceful “disegno” to bear in deceptively complex snapshots of interior scenes. In “Dye Party” we see Vaeth and two friends from above, in a bathroom. Vaeth is receiving an ablution of hair dye that has turned the water a light magenta. Nude, she is angled up into a corner of the tub, her hand languidly holding her phone. Her fingers, near the center of the composition, splay out, reaching toward multiple corners of the painting. They draw our eyes across other carefully constructed arrangements—conditioner, a lighter, lotion lying on the floor. A woman holding the hair dye over Vaeth’s head stares back toward the viewer with a certain disdain. We are interlopers. 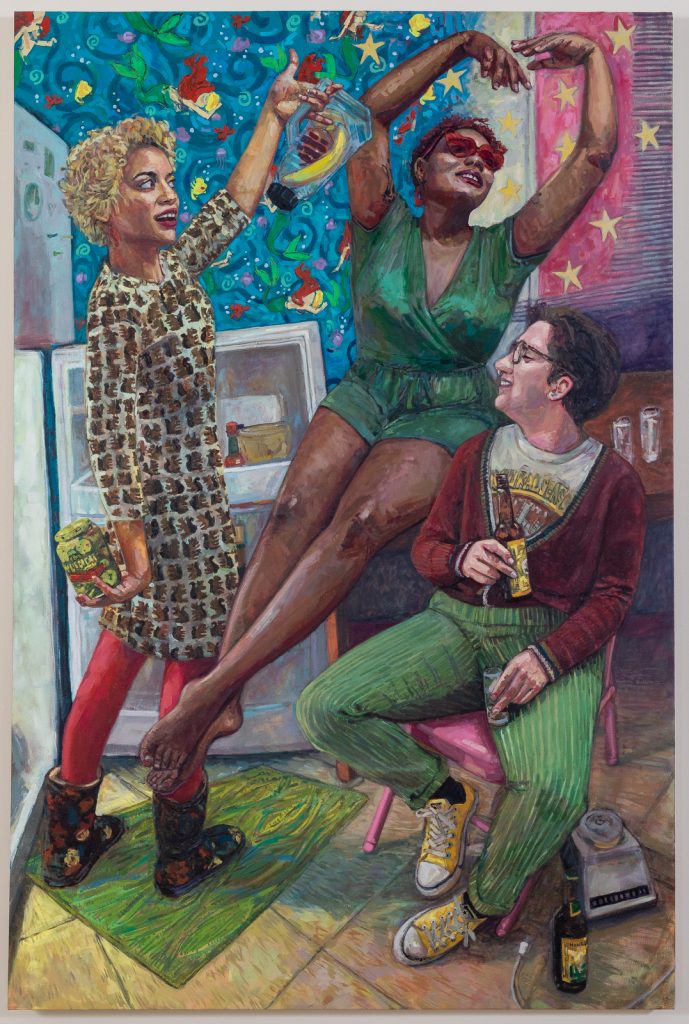 The anchor of this exhibition is “PreGame.” A prelude to an unknown event, in htis painting we see Vaeth grabbing a jar of pickles and holding up a blender with a banana in it. Behind her, centered on the canvas, a figure in a green dress and heart-shaped glasses raises her hands in a balletic gesture. A third character smiles upwards, sucking on a beer and shot. The weirdness and inward joking of this scene is lyrical. And yet, beyond the wackiness, Vaeth confidently demands our attention. The central figure evokes a magical realism, like a character from Marc Chagall, dancing through the air. Details—a bottle of Tabasco sauce and a “Little Mermaid” shower curtain—offer autobiographical joie de vivre. The painting is a bravura display.

There are pensive moments. We see Vaeth curled on a couch, looking absently toward two girls, undoubtedly sisters. I felt a sense of otherness in Vaeth as she contemplated the distance between them, a glass of wine in hand.

The paintings are not fully mature. Impasto effects rear up randomly, and Vaeth’s surfaces veer from matte to gloss and back. But their ultimate power lies in their fascination with the quotidian. Imagine, people from underrepresented groups doing essentially nothing, putting on makeup, grabbing food out of the fridge. When are minorities represented this way? The art world seems to demand a focus on identity, politics, or both from underrepresented artists. Minorities have to “mean” something. How refreshing to see these young women hanging out, not up to a goddamn thing. Just living. (Rafael Francisco Salas)