In a new weekly column, art critic Lori Waxman adapts her 60wrd/min project to review work by artists whose practice has been affected by the pandemic. Waxman will cover shows that have been cancelled, postponed, shuttered, made remote or opened by limited appointment, as well as art made during quarantine. Reviews are written in the order in which requests are received. This iteration of 60wrd/min is a democratic, good-faith effort to document more of the making of art that is happening in our city at a time when much of it is relatively unobserved. 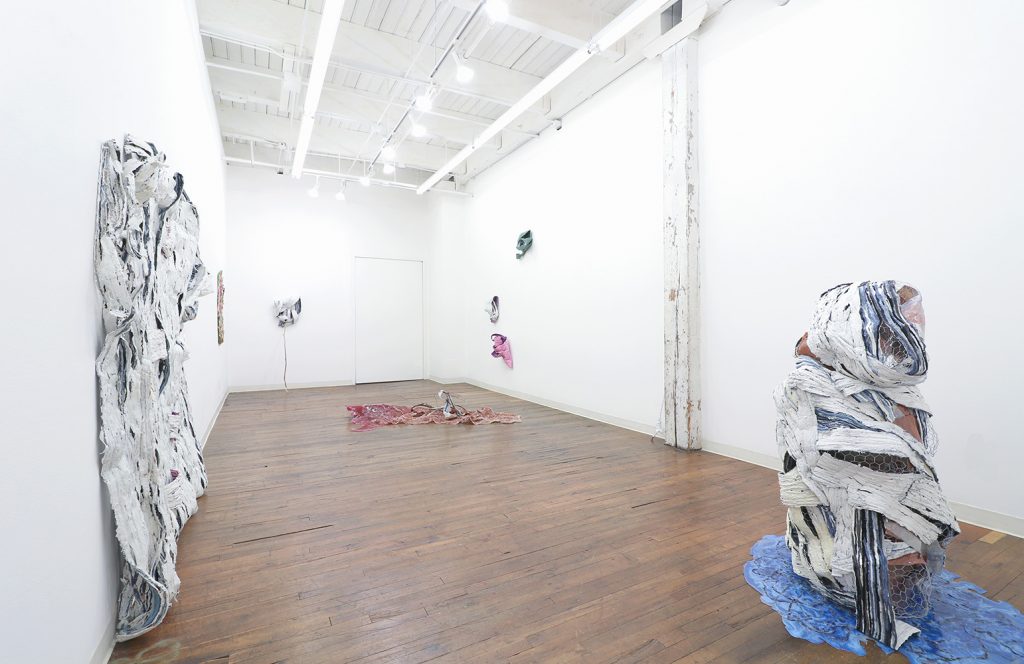 Encounters while walking in a forest might include: peeling birch bark, dead and rotting logs, the mysterious foam that builds up in the slow spots of a creek, abandoned bird nests, wondrous but alarming fungi, weather-beaten litter. I don’t know exactly what Judith Mullen observes on her daily walks among the trees, but I know that I am reminded of such findings when I look at the sculptures in “Linger,” her solo exhibition at Devening Projects. There’s nothing naturalistic about Mullen’s twisting constructions of plaster, yarn, Ace bandages, resin and chicken wire, not their materials or their colors, which range from mint and bubblegum to ivory, gold and emerald. Rather, their relationship to the forested path is one of affinity, of thin, curling shapes and curious growths and puddling liquids, of attention paid to what is present, to a complex place that demands nothing of a human being other than respect. If inspiration or illumination result, all the better for it. 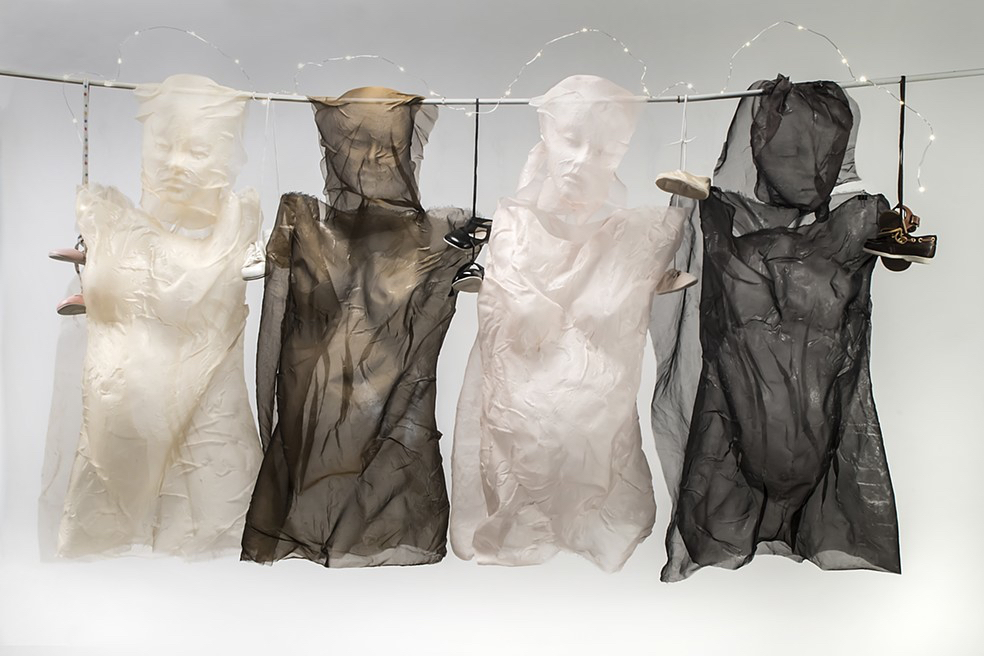 Deborah Hirshfield, a sometime maker of colorful batik silk scarves, meant to be worn gracefully on the female body, also makes female bodies out of silk. She molds and sews organza into faces, pregnant bellies, hands and even crotches, then suspends these body parts into configurations that recall laundry lines and meat hangers. Fabrics are hand-dyed in shades that include black, brown, blue and ivory. The sociopolitical relationships between these elements ought to register with any feminist worth her placard: the connection between so-called women’s work and women’s bodies, the many ways in which female bodies get compartmentalized and objectified, the continuing need to diversify the American women’s movement. So it comes as no surprise to learn of the auspices under which Hirshfield’s sculptures were meant to be exhibited this year, before the pandemic cancelled or virtualized so many opportunities: the Suffra-Jetting and Craftivism group exhibitions at Womanmade in Chicago, and the annual Oakton Community College Women’s and Gender Studies department exhibit. 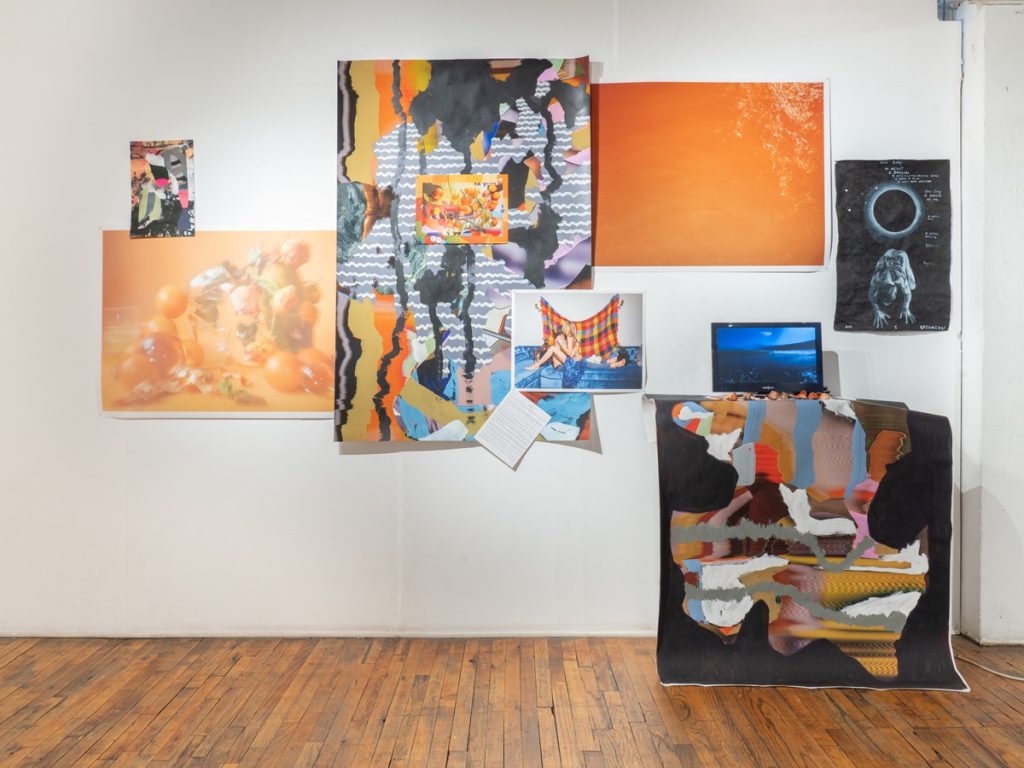 Marzena Abrahamik and Jordan Martins, installation view of “From a Strange Place” at Heaven Gallery, Chicago, 2020

Are some colors or patterns more conducive to psychedelic experience than others? Without doubt, certain substances are, but what about places or times of day or textures or behaviors? In “From a Strange Place,” their two-person show at Heaven Gallery (cancelled then reopened under limited hours), photographer Marzena Abrahamik and painter Jordan Martins explore the possibilities. They include the resemblance between crashing waves, the branches of a large tree, the gills of a giant mushroom, and the reflection of light on water; the snaking of a vibrantly dotted line; being in the ocean with a happy baby; irregular turquoise, mustard, red and olive patches intercut with other levels of imagery; violent vomiting; flowers seen through a haze. Though the work on view is primarily two-dimensional, the overlaying of art on and off the walls of the gallery moves the exhibition into the third and fourth dimensions, beckoning visitors to join a trip that scientists, at least, are finally starting to take seriously again. 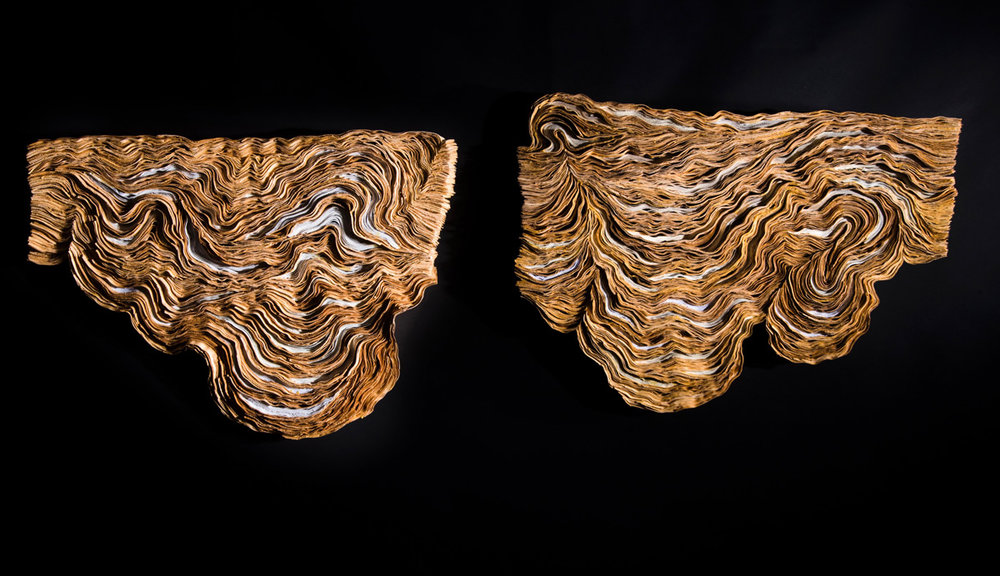 Mille-feuille pastries, elaborate hair arrangements, eddies and waves across a lake, the tight spheres of tree rings—the curved and twisting sculptures Barbara Cooper has created out of hundreds of layers of wood veneer and books recall these forms and others, too. More than anything, they speak to me of geology, of the strata atop which we perch, the rocks and minerals, the compressed plant matter, the mud and sand. Except that, as humans alive in the Midwestern United States (the sculptures were displayed in a shuttered solo show at the Krasl Art Center in Michigan), our strata, so to speak, are well enough represented by Cooper’s choice of materials. Trees and information, that’s what we’ve got: the knowledge of trees, the material of cut-down trunks, the words printed on pulped wood. If that sounds like an old-fashioned take on the stuff of life, it bears noting that Cooper’s materials are all recycled and discarded, the rejects of current cycles of production and consumption. They’re also illegible in the traditional sense; you can’t read the words and you can’t see the grain. Unless, that is, you’re like a geologist, adept at finding meaning in dense layers of supporting materials. 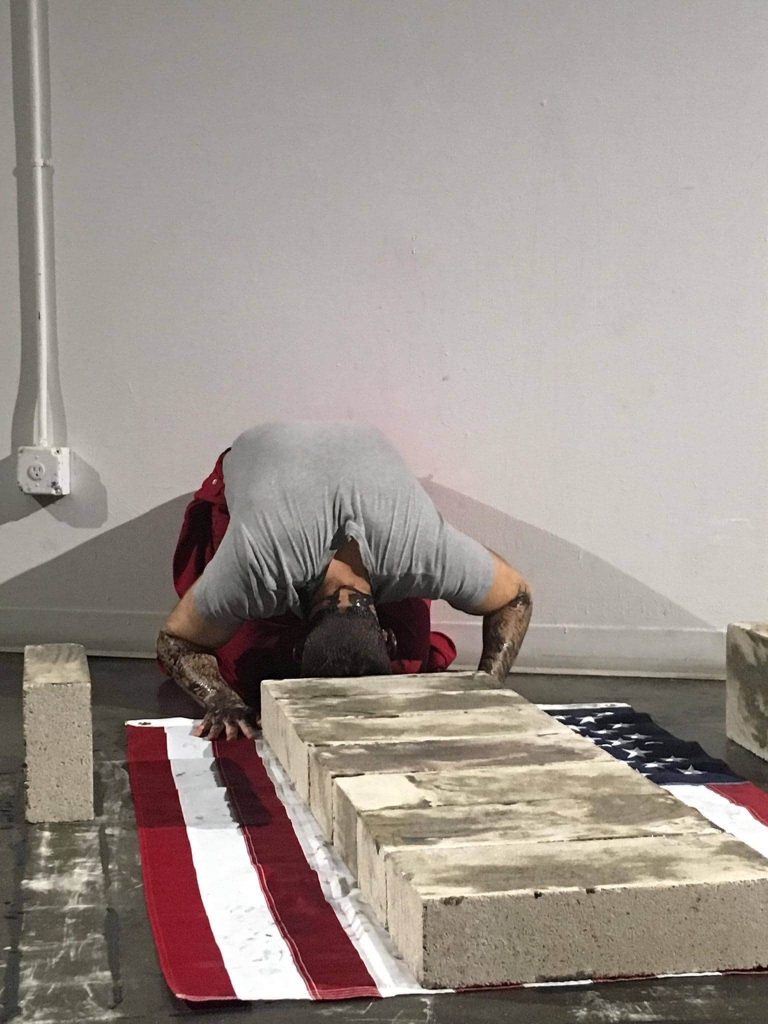 Sami Ismat creates performances that challenge Americans to acknowledge how their country quashes the freedom and safety of those who come here for refuge. Ismat ought to know: a Syrian asylum seeker, his citizenship status is in limbo and he lost his father to COVID-19 in the spring. His soul-crushing performance from 2019, “Every Time I Step Toward Freedom,” eloquently embodies the former while eerily foreshadowing the latter. Dressed in a jumpsuit that recalls both prison and construction garb, Ismat builds a homely wall of concrete blocks and mud around a tenderly unfolded U.S. flag, upon which he enacts the Muslim daily prayer ritual. As he repeats the Salat, he begins to place bricks atop the flag, turning them into a wall that eventually displaces, bars and removes him from the site. He leaves, utterly spent, totally silenced. I have never understood the prohibition against using the American flag for anything other than the most patriotic of flag waving; any use of it that is sincere, loving and thoughtful ought to be celebrated. Ismat’s performance does just that, and it would have done it again, at a time when it is utterly needed, in “Here to Stay: Braving Barriers Through Performance,” an exhibition devoted to social justice artworks, scheduled to open this fall at Union Gallery. When the University of Wisconsin, Milwaukee, cancelled the show, pretending that the reasons were pandemic-related, the school exposed itself as part of the very problem that Ismat’s performance addresses. Good that after much protest, the gallery recanted. Better will be for them to address the systemic racism that makes space for censorship of anyone and anything that does not fit white supremacist notions of American. (Lori Waxman)