In a weekly column, art critic Lori Waxman adapts her 60wrd/min project to review work by artists whose practice has been affected by the pandemic. Waxman covers shows that have been cancelled, postponed, shuttered, made remote or opened by limited appointment, as well as art made during quarantine. Reviews are written in the order in which requests are received. This iteration of 60wrd/min is a democratic, good-faith effort to document more of the art making that is happening at a time when much of it is relatively unobserved. 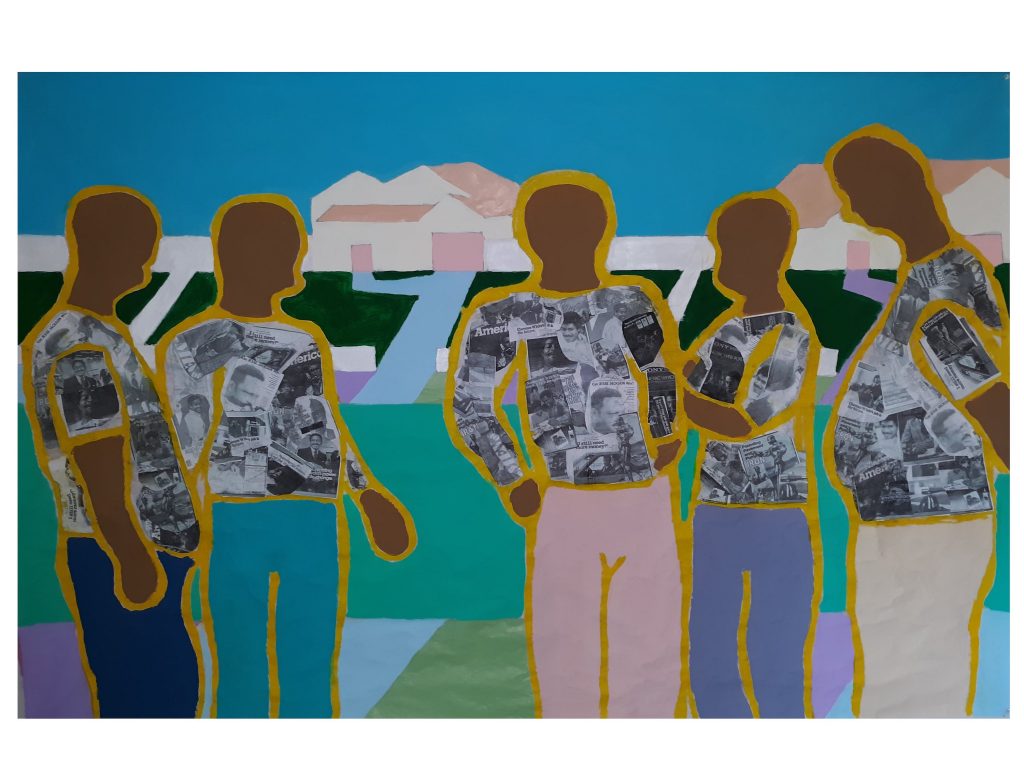 How we are seen, how we see one another and even how we see our own selves is deeply impacted by mass media. Subordinate groups know this all too well—women, Latinos, Muslims and everyone else who isn’t white, male and heterosexual. African Americans arguably know it best (or worst) of all. It’s a subject neatly explored in a series of collages created during quarantine by JEFF, a South Carolinian artist and community activist. The scenes are simple enough, featuring a mother and child, people lounging in a garden, a horse and rider, a group of folks talking on a residential street. Blockily outlined and faceless and sporting uniform clothing, the figures are hard to understand as distinct human beings. How we distinguish them depends almost entirely on the cues JEFF does provide, namely the family photos and pages cut from publications like EBONY or JET, bits of which he uses to fashion clothing and body parts. Luckily these folks have identities formed by such positive imagery. Implicit is all of the negative media that’s also out there, wreaking serious damage on individuals and groups alike. 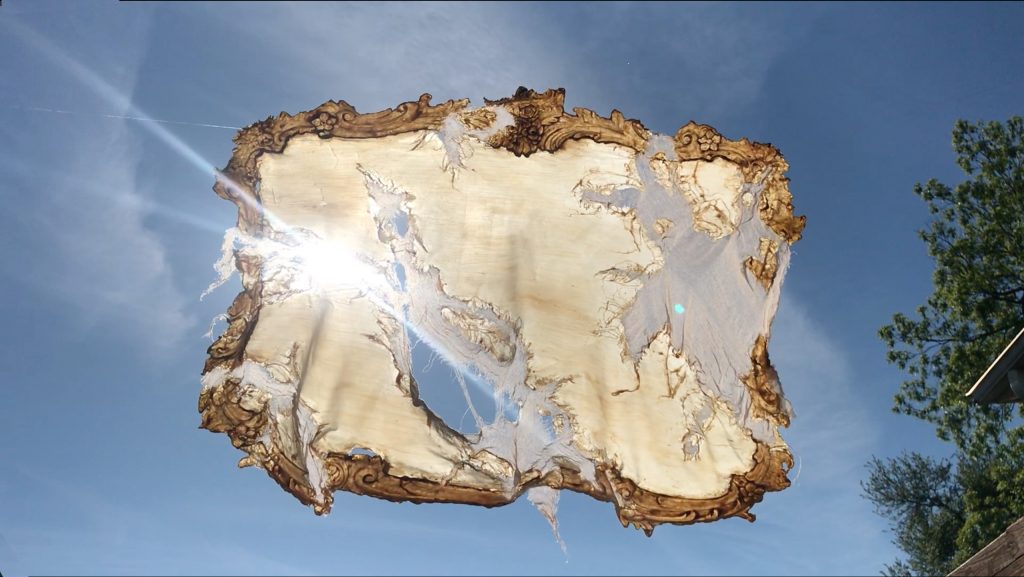 Humans haunt after they’re gone, but what about objects? What do they retain once they’ve passed on from their first lives, perhaps onto a fourth? Think about the special heft of an antique dresser, of eating with the silverware inherited from a great-aunt, of sleeping in a building many hundreds of years old, of holding a satchel that survived an earlier war. The sculptures of Carlie Trosclair dabble in this animistic wondering, a natural outcome for the daughter of a New Orleans electrician, who as a child spent more time than most in old residential properties under construction. Buildings are but giant objects, filled with smaller objects, each of them records of lives lived. During quarantine, with shows cancelled and postponed, Trosclair has scaled down her technique of using latex to cast staircases, window frames, even an entire room, opting instead for a fancy old mirror. Hung on invisible wire up against the sky, frayed where its cheesecloth backing has torn, “mirror” is a ghost of ghosts. How many long-gone souls saw their likeness in its glass? What did they see? Reflect on that as the wind flutters the mirror’s once solid form, as the sunlight bursts through its once opaque surface. 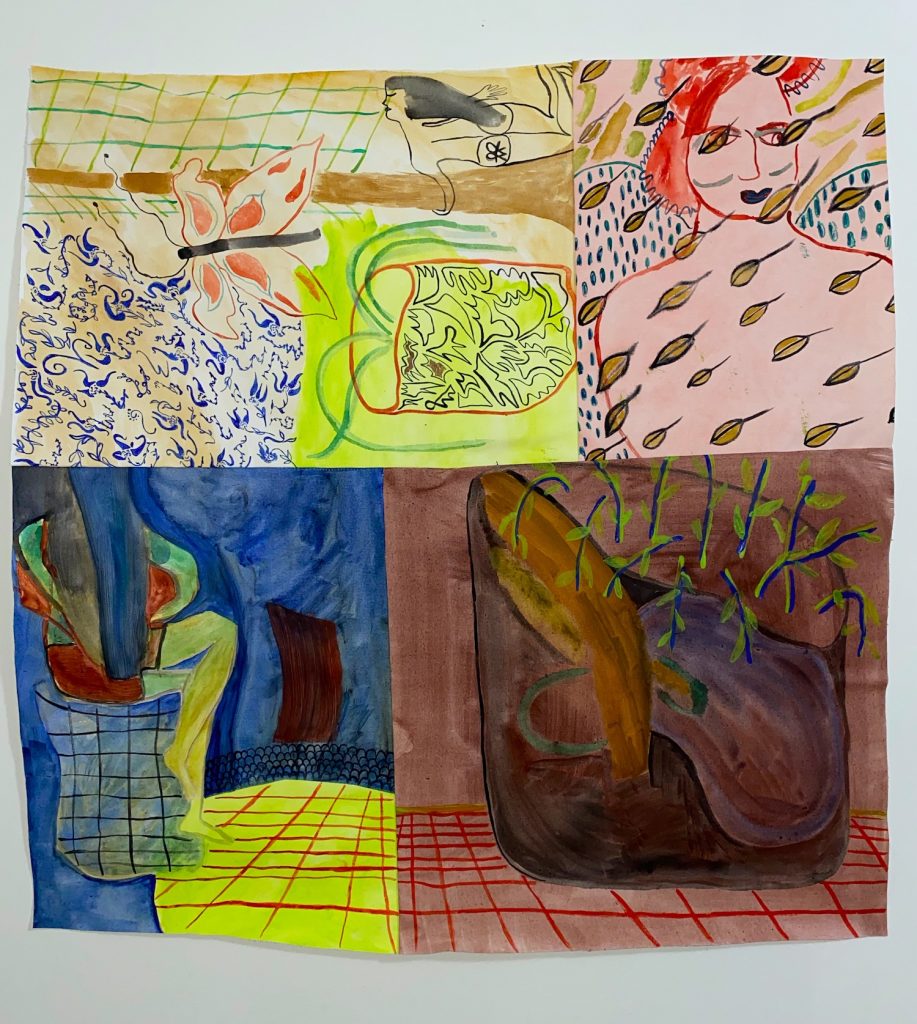 What visions arise when we turn our gazes inward? “Inward” can mean into one’s region, one’s garden, one’s room, one’s body, one’s self, and the history of art is full of the results. After six months of the pandemic, more contemporary artists than usual have generated their own answers to this question. Sonia Corina Ruscoe, living under quarantine in Brooklyn and at her parents’ home in upstate New York, is no exception. Her languorous acrylics and watercolors, painted on unstretched canvas, reveal a world full of snakes and nude women, potted and outdoor plants, much of it covered in all-over decorative motifs. Henri Matisse’s loose and lovely colored linework, as well as many of his pleasurable domestic subjects, are here. So, too, is Nikki de Saint Phalle’s boldly appreciative take on the female body, plus some of Yayoi Kusama’s obsessively detailed patterning. Why those references? I see them reflected pictorially, but also for the ways in which those famed artists turned masterfully inward, each for their own reasons. The results, like Ruscoe’s, reward viewing as much, perhaps even more so, from the outside. 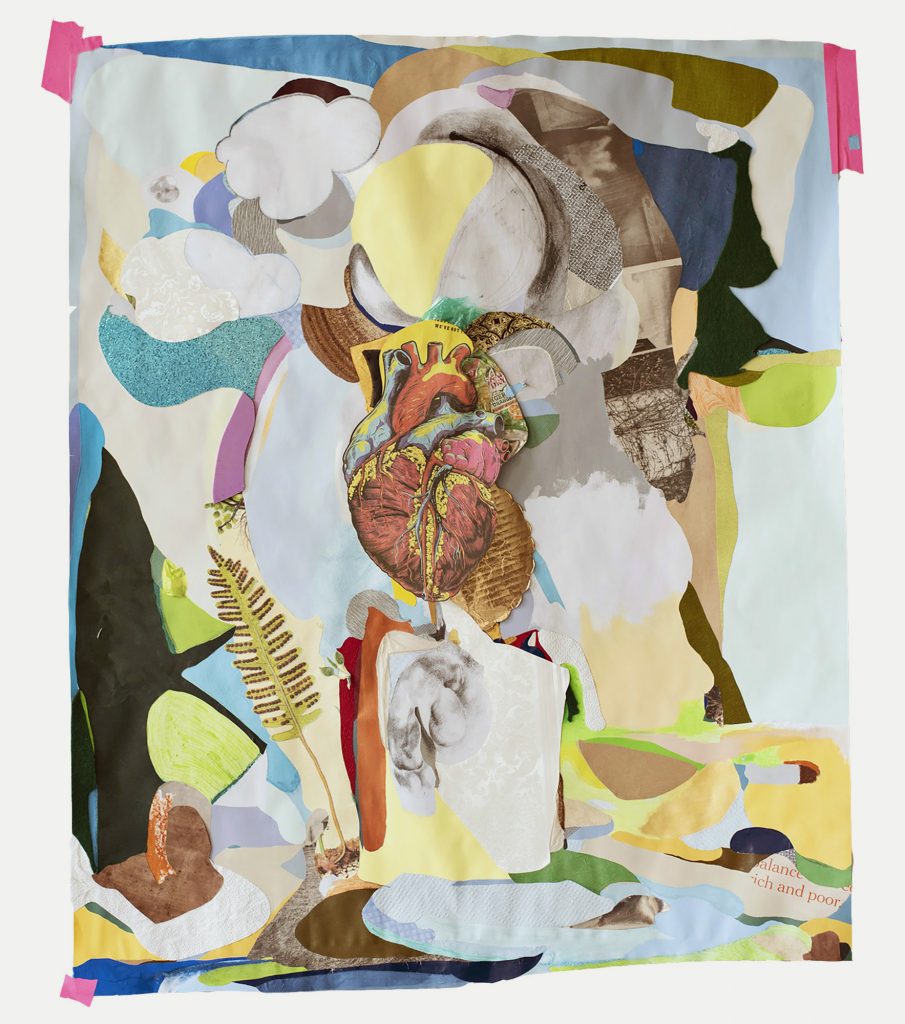 America is notorious for judging people based on the color of their skin, with financial, educational, romantic, medical, judicial and even fatal consequences. Celebrated artists like Kerry James Marshall and Amy Sherald have painted one way forward, establishing practices of detailed portraiture focused exclusively and recuperatively on Black subjects. But there are other, stranger means, including those developed by Barber, a Detroit native who gave up on figuration but not humans. As seen in a solo show, “Barber Paints People in Middle America,” on view at the Hoff Family Arts and Culture Center in Council Bluffs, Iowa, his take on representation depends heartily on collage. We each of us comprise multitudes, and the array of colored and printed papers, book spines and pages, plastic bags, drink labels, and fabrics that Barber cuts and pieces together suggest as much. Though it is undoubtedly people that he depicts—an enormous bust of a woman, a parent and child, a gathered group—prejudgment is rendered moot, complexity is a formal given, and dialogue is warmly invited. (Lori Waxman)