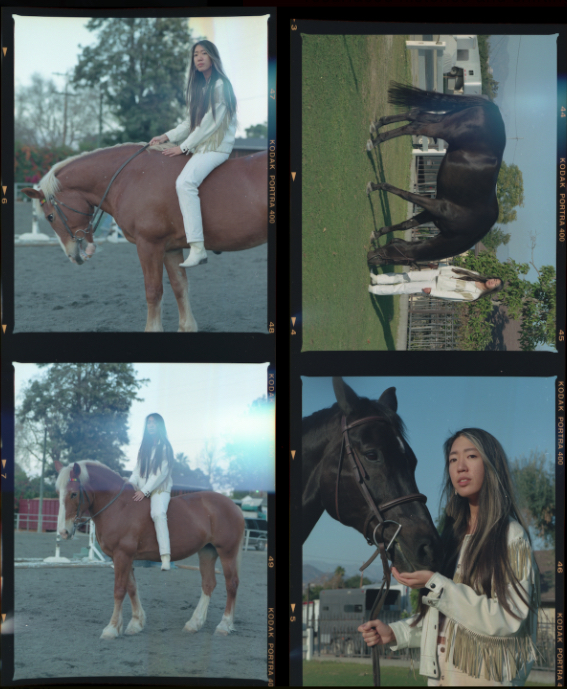 stephanie mei huang, “four self portraits as a cowboy,” 2020, in collaboration with V Haddad and Sam Richardson’s self-portrait service

What’s a Chinese-American cowgirl to do? Frontier mythology has excluded at best, scapegoated at worst, the Chinese immigrants who labored throughout the West. The Cowboy Artists of America (CAA) has had but one non-white member, and not a single non-male member since its founding in 1965. And the U.S. president won’t stop calling COVID-19 “the Chinese virus.” Enter stephanie mei huang and “the foul lump in my throat,” a multimedia body of work—meant to be exhibited in multiple postponed, virtual and appointment-only shows in Los Angeles and elsewhere—that addresses the racial grief of the contemporary Chinese-American situation. Elements include sly reworking of Western-themed dime novels, a rocking horse that shrieks as it oscillates, a video of huang’s para-fictional induction into the CAA, and various self-portraits as a cowboy, done in all the relevant styles. Will parody heal huang’s wounds? Only time will tell. In the meantime, it must be admitted, cowboy boots, fringe, and an equine companion suit her well. And why not? Off into the sunset, indeed. 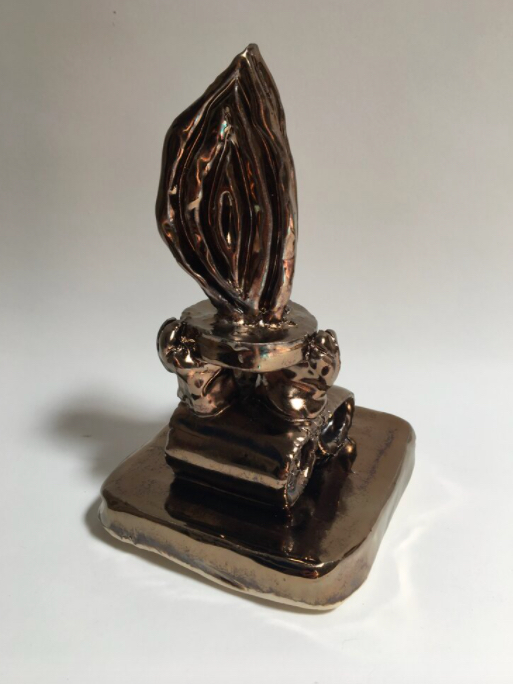 What’s a social practice artist to do during a pandemic that dictates a minimum of six feet between people, mask wearing and strict limits on being with others? Artist Lexa Walsh, her residency at Grand Central Arts in Santa Ana, California, indefinitely postponed—she had plans to investigate the radical activist Sisters of St. Joseph of Orange—has turned to ceramics, prints and drawings. That might sound unremarkable, but it’s striking when your professional work has for fifteen years included such collaborative endeavors as group impromptu protest-song creation; an ironic art consultancy service; and a cookbook-style portrait of the San Pablo neighborhood workforce. Despite appearances, however, a coherence emerges between Walsh’s relational and object-oriented creations, all of which espouse a folksy, critical sense of humor and an appreciation for the wonderfully ugly things of life. On sale now, through her website, are tenderly scowl-faced clay nuns, glazed chains (break ‘em!), dozens and dozens of harpies, and handmade trophies for all occasions. Go on, you know you deserve at least one. 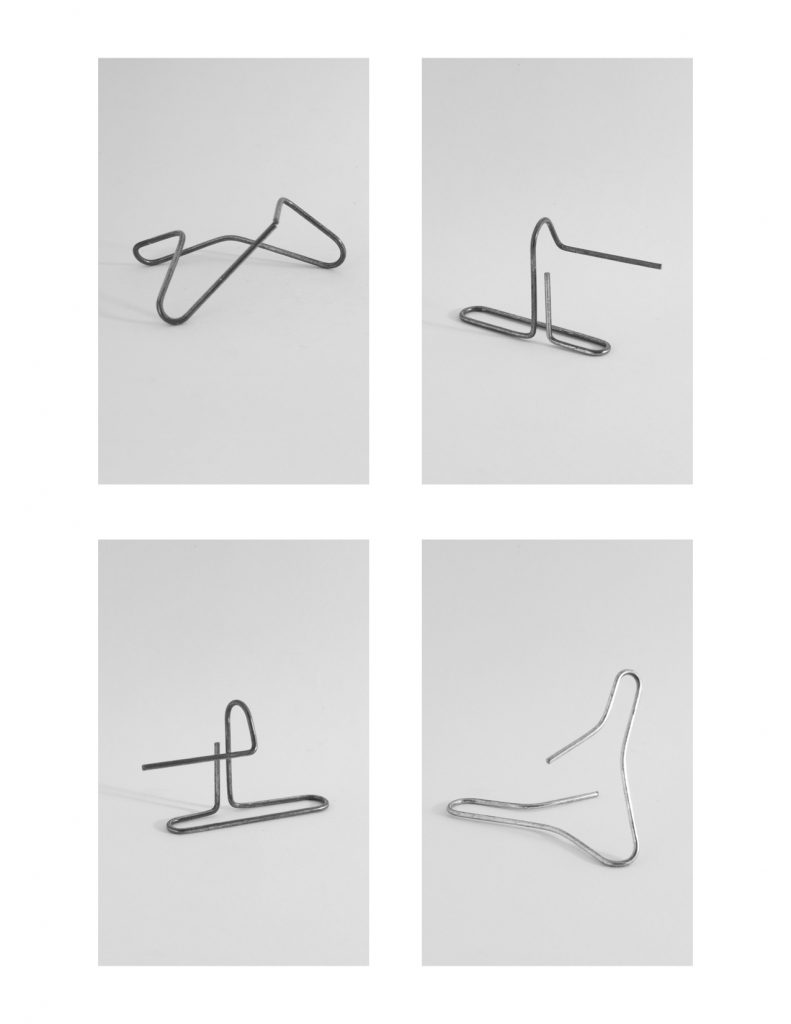 If you were a paperclip, what would you look like? If you were an artist, trying to make work amidst a global pandemic that led to the exhaustion of many reserves, among them financial, medical, emotional and material, what would you make art out of? These two questions find their confluence in “Oddballs,” a charming series of ninety paperclip sculptures fashioned by Dan Nelson during the COVID-19 quarantine, after he’d run out of art materials but not, apparently, basic office supplies. Every little wire doodle has been meticulously photographed, allowing the viewer to enjoy Nelson’s dexterity with needle-nose pliers, not to mention his ad-hoc creativity and determination. Each also bears a given name common in Belgium around 1900 (Pjeroo, Ysewijn, Hurbine), and while that seems appropriate to those shapes that resemble stick figures and giant noses, about others I disagree. I recognized a Calder, a yoga mom, a figure of Italian Modernism, a sidewalk bike rack, a cowboy in a ten-gallon hat, and a rower, among others. If we diverge on what, or who, they all are, on this at least we can concur: necessity may be the mother of invention, but boredom and privation are close relatives. 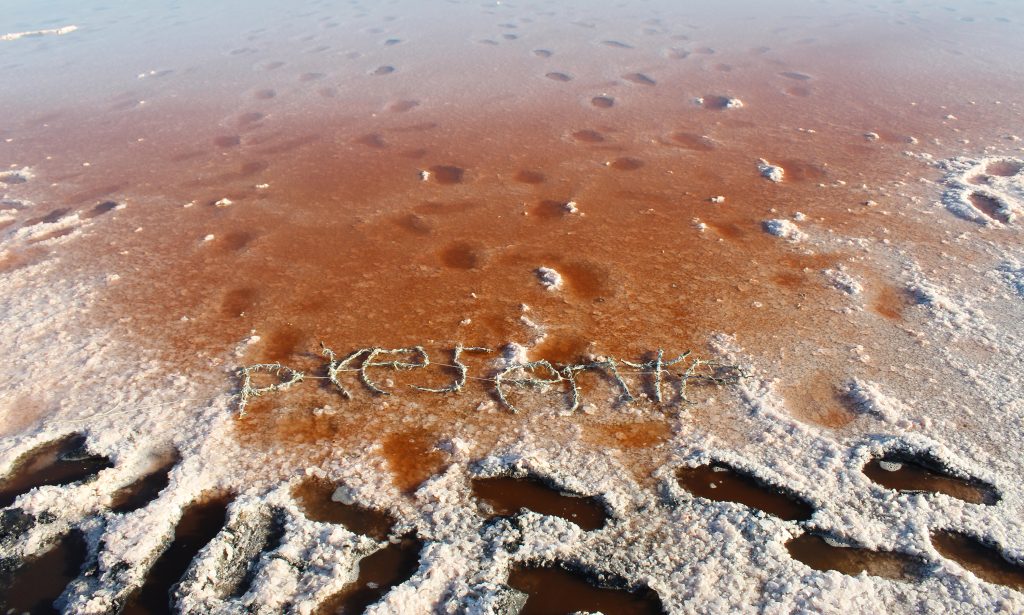 What does land know of the lives lived and lost on its mountain ridges, its parched deserts, its rocky shores? What can buildings tell us of the goings-on behind their closed doors or of the views seen from their windows? They are aware of everything, I believe, but most of us don’t seem to speak their language. Beatriz Guzman Velasquez does, she is in conversation with her surroundings in the Rio Grande Valley, near the Mexican-Texan border. It is not an easy discussion to hear, but in artworks made during the quarantine, she lets others listen in. On the windows of her home, in an inversion of her mother’s practice of taping newsprint to the windows as a sunshade, she affixes the daily paper cut with letters that spell out “hoy hay más muertos que vivos.” Translation: today there are more dead than alive—it is a story of now, of deaths from COVID and related factors like domestic abuse, and also of the past. At the Sal del Rey, a local salt lake, an alphabet of mesquite branches and fresh sage form “presente.” Who is present? Only those whose existence has been threatened need to make such declarations. The blood-red waters beneath her words concur. 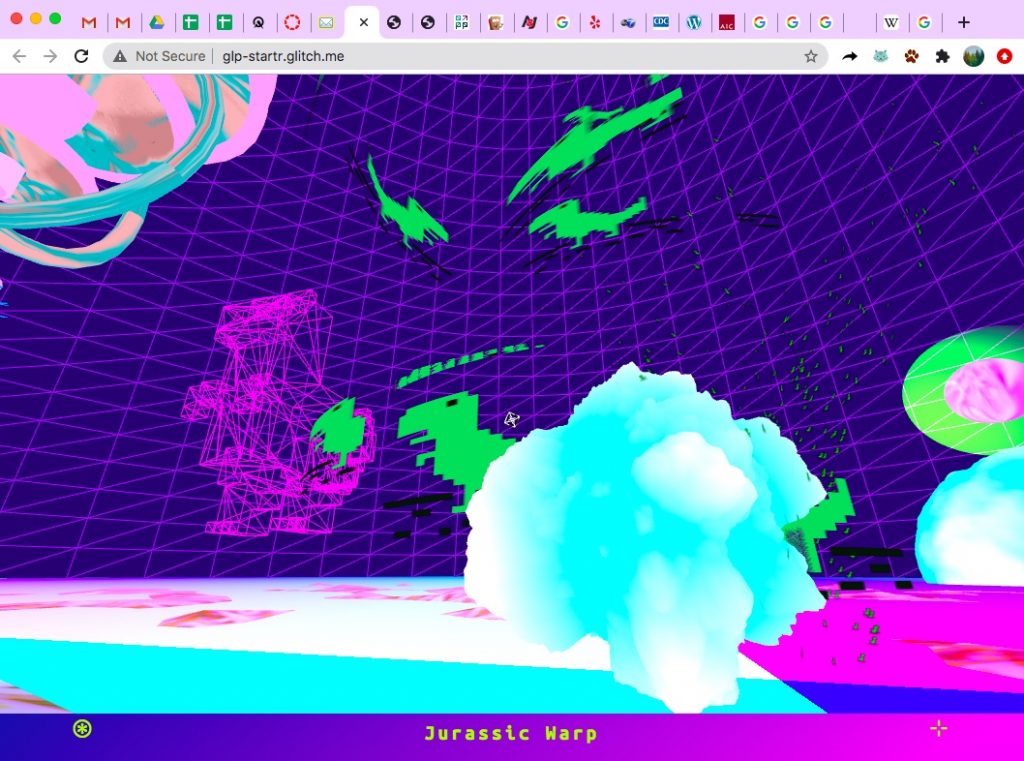 I’m no gamer, in fact I try to avoid engaging with the world through a screen as much as possible. How’s that going for me? Not so well lately. So I may be an especially grumpy explorer of “Jurassic Warp,” KT Duffy and María Luisa Sanín Peña’s interconnected virtual reality rooms. Originally meant for exhibition at Ground Level Platform, an artist-run space in Chicago’s Pilsen neighborhood, Duffy moved the project online when the gallery closed due to pandemic and immigration troubles. Navigation of “Jurassic Warp” can be tricky for a person not great with hand-eye coordination (me again!), and the worlds on offer easily slip from trippy to nightmarish and back again. Guest appearances by the No-Internet T-Rex, floating windows and a random CAD drawing are enough to make a person wonder if she’s accidentally wandered into a digital no-man’s land. Indeed, one of the worlds is constituted by images of a real no man’s land: a doctor’s waiting room, multiplied and layered on itself dozens of times. Hard to say if those are better or worse places to kill time than any other these days. At least there’s no chance of contagion. (Lori Waxman)