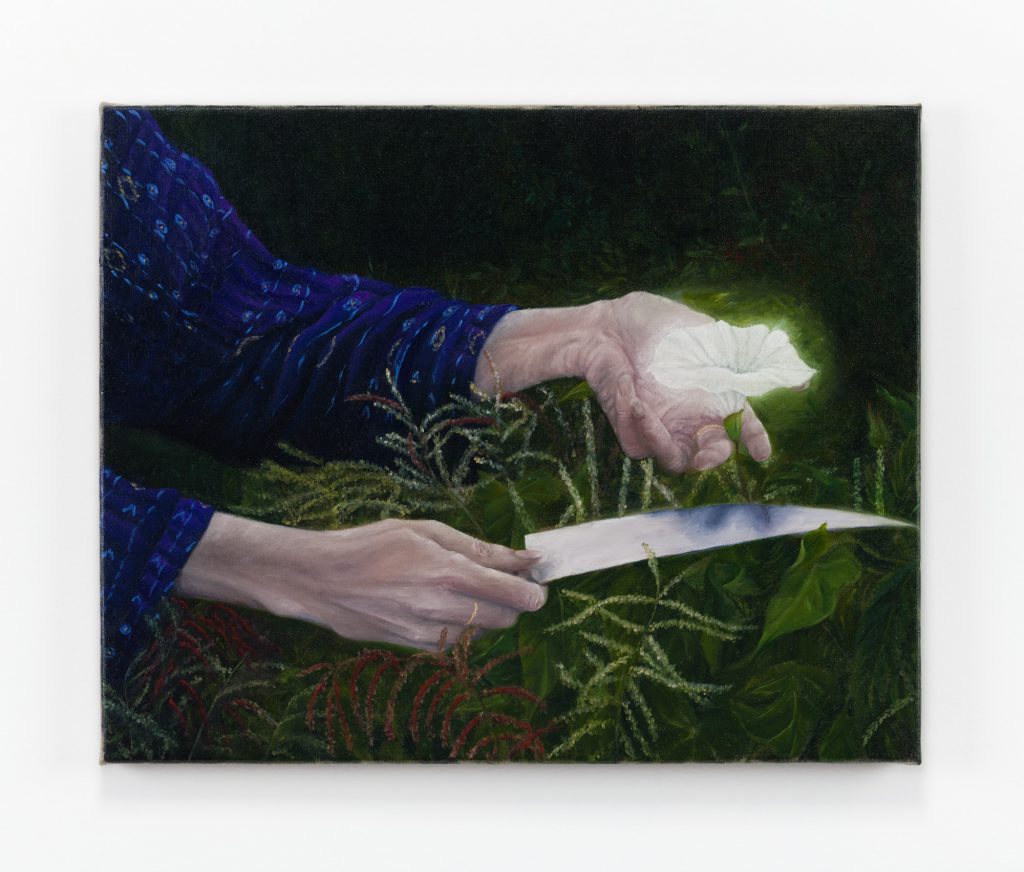 Art fairs, which nobody loves, have become inescapable venues for sales. Artists prepare at length for them, but with so many pandemic cancellations and online migrations this year, most of those efforts have been in vain. Srijon Chowdhury, who painted fifteen canvases for the Antoine Levi gallery to display at Basel’s summer Liste Fair, is no exception. These are not optimistic compositions. In moody oils that recall the eeriness of a Dorothea Tanning, Chowdhury envisions the evils of capitalism and smartphones, the burning of the world, the unbearably beautiful fragility of bodies, the hurting of nature. A small, all-black painting burns at its center with the halo of a solar eclipse, looking also like fiery hair, a cosmic bellybutton and the end of the world. Given their dismal outlook, it comes as no surprise to learn that Chowdhury created all of these works after quarantine went into effect. But fifteen? That’s a lot of paintings for a few tortured months. What will he do as the apocalypse continues? 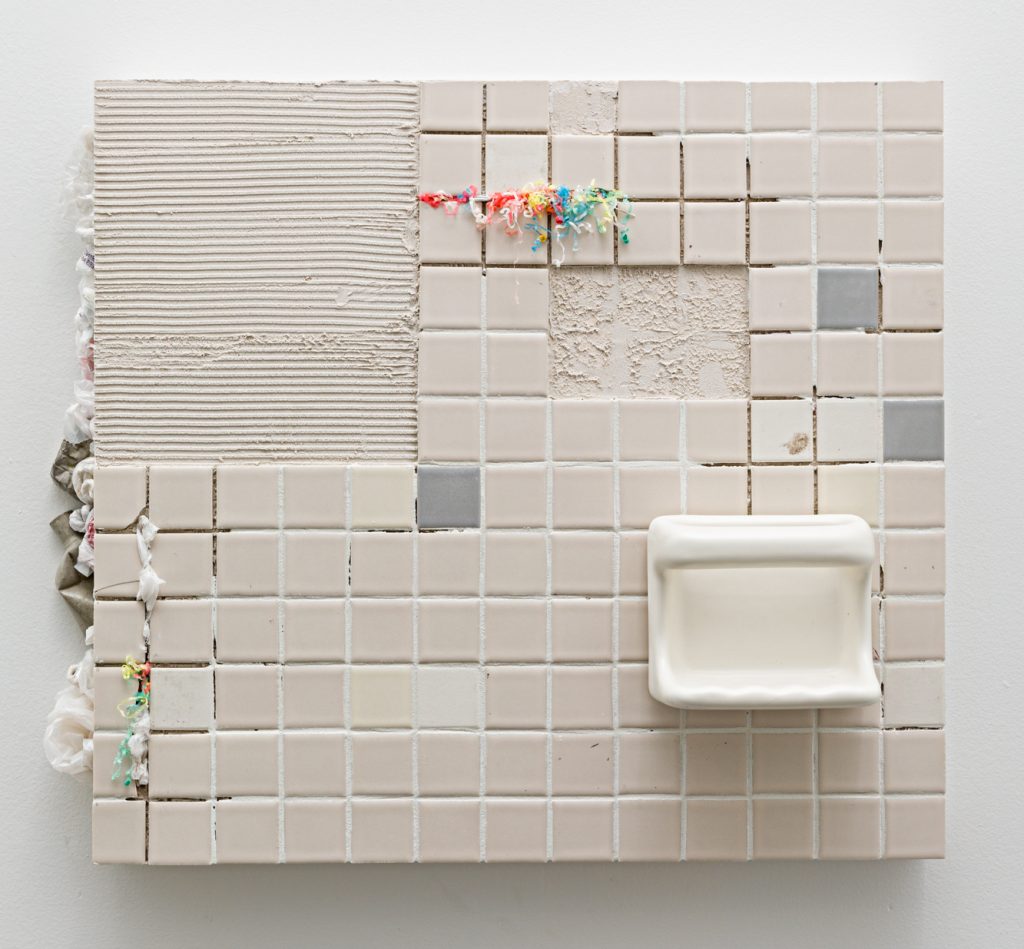 Have you ever walked into a public bathroom and noticed the wavy grouting revealed by missing tiles, the peering eyes of empty drywall anchors, the bits of trash that get tucked into crevices because no garbage can is nearby? Have you seen the peeling stickers of another era, the mysterious markings that don’t quite add up to coherent graffiti? For “Build Your Self.” her BOLT Residency solo exhibition at Chicago Artists Coalition (closed due to the pandemic, but set to reopen in January 2021), Tamara Becerra Valdez not only evidences her own deep looking at quotidian spaces but helps to habituate the unaccustomed viewer. Valdez accomplishes this by taking advantage of the attention and valuation built into art and its spaces: when we see something in a gallery, we know that we are supposed to contemplate it. Her wall-hung panels may look as if they have been cut whole out of decrepit public facilities—à la Gordon Matta-Clark—but close inspection reveals everything to have been meticulously assembled by Valdez, down to the cast concrete soda bottles. Noticing is the first step to caring. 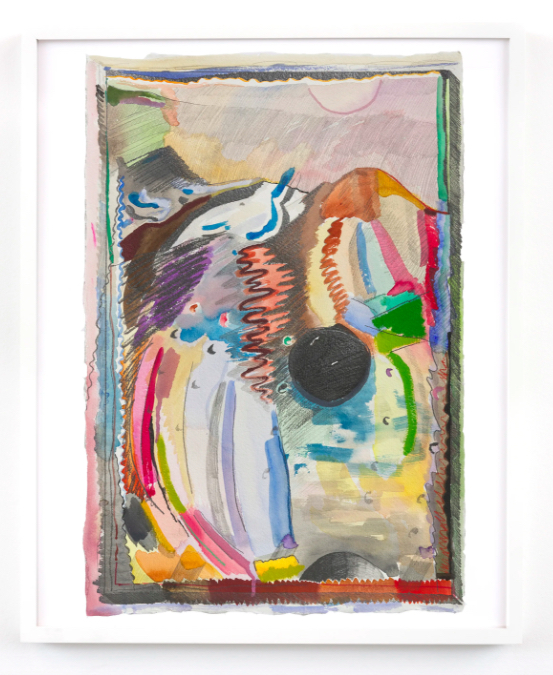 A landscape drawing can be many things, but it is almost always a flattening of that endless changeable dimensional place into something able to live on a sheet of paper. A landscape poem does this, too. Consider this confluence in Katy Cowan’s “Suns Pass Flat,” an online exhibit at L.A.’s Philip Martin Gallery of pandemic drawings created in response to a forthcoming book of poetry by her partner SJ Cowan. Her pictures, in ways reminiscent of Klee and Kandinsky, compact and fragment the air, land, sun, water in every shade of the rainbow, including many delightfully unexpected hues. (Purple and red hillsides, absolutely yes.) Composed in watercolor, ink, enamel and oil paint, they become more sketch-like with the addition of graphite markings. These introduce frames, outlines, scribbles and shadows, some of which help constitute the depicted landscape, others which highlight its existence as an artwork. Much as I’d like to magically walk right into the shimmering places of Cowan’s depiction, I prefer the realness of their strange residence on paper. Suns pass flat, indeed.

Artificial Intelligence allows machines to learn as they go, becoming ever more capable of executing a variety of tasks. The applications are far reaching: self-driving cars, automated police surveillance, computer-generated medical care, even art generated without artists. This last possibility veers into territory still considered unique to humans, though probably not for long: creativity. It is not without irony, then, that Ben Bogart’s artworks employ AI as their primary tool. Meant to be presented in May in Montreal, alongside the International Symposium on Electronic Art (ISEA), itself delayed due to the pandemic, Bogart’s “Watching (2001: A Space Odyssey)” is a computer-generated remake of the seminal 1968 movie. Taking about a month of processing time, Bogart’s machine deconstructs the entirety of the two-hour-plus film into tens of millions of image and sound fragments, averages and groups them according to formal qualities, then arranges them according to the original film. What results is an eerily attractive and very blurred approximation of a critical, multilayered and profoundly human production. No surprise that HAL’s voice sounds just right. (Lori Waxman)