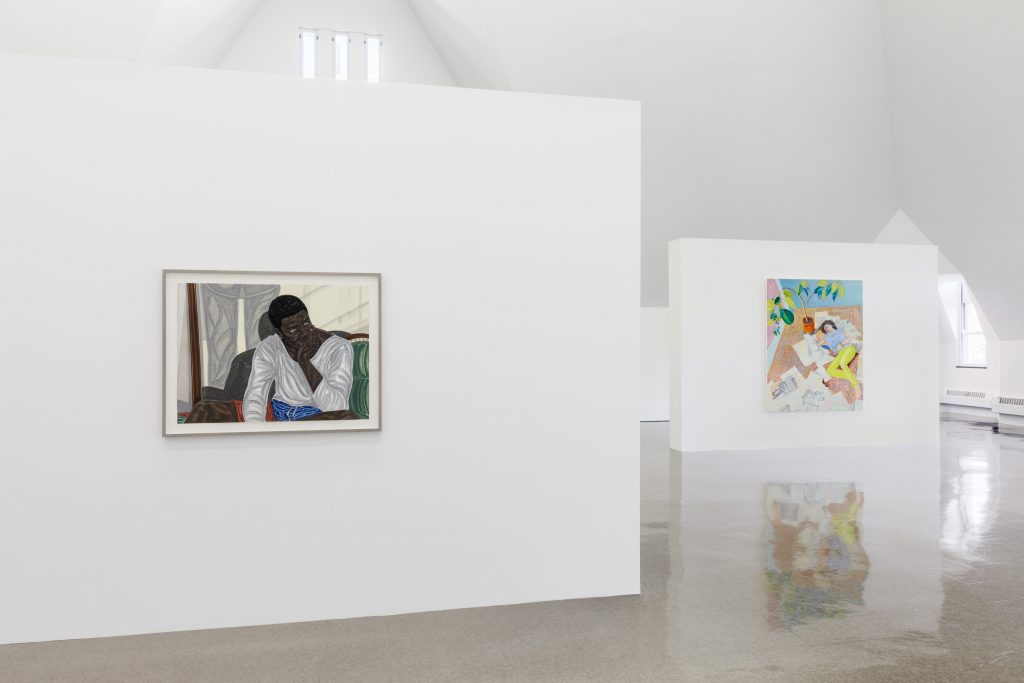 I thought I knew what to expect when entering “Nine Lives” at The Renaissance Society, one exhibition of many that have opened around the country as part of the Feminist Art Coalition. I looked forward to seeing a collection of works that were by all female or non-binary artists, or that perhaps embodied a feminist ideology, which they did. It was much more than that, as each piece was so varied in its message, each artist putting forth an experience both singular and authentic. No two experiences are alike, and these diverse works, each a window into a specific identity, reveals to us an intersectional feminism, one that acknowledges the needs and differences that come with different identities.

All of the works in the exhibition, whether video, installation, painting or poetry, function like a portrait; they portray a person’s identity and experience—some more literally than others. Toyin Ojih Odutola’s “In the Drawing Room” is the first piece you encounter: a moody, intimate portrait of a Black woman, her head resting on her hand in a worried posture. Nearby, Elle Pérez’s photograph “Mae (three days after)” shows a close up of Mae, who pulls back a scarf to reveal a scar on their neck and faded bruising around the eyes. Although the viewer does not have further context, we can assume that this photo was taken post-gender-reassignment surgery. Just beyond these works is a large-scale painting of a woman lying on the ground. In Aliza Nisenbaum’s “Kayhan Reading the New York Times (Resistance Begins at Home),” the woman looks despondent, eyes glazed over as she attempts to read one of many newspapers that surround her on the floor—as overwhelmed by the news as we are today. What do these pieces have in common except for a figure as their subjects? The takeaway: why look for the similarities? We must take into consideration the elements that form each individual, like race and gender identity, which shape their experiences in the world—and note that identifying as female changes things still. 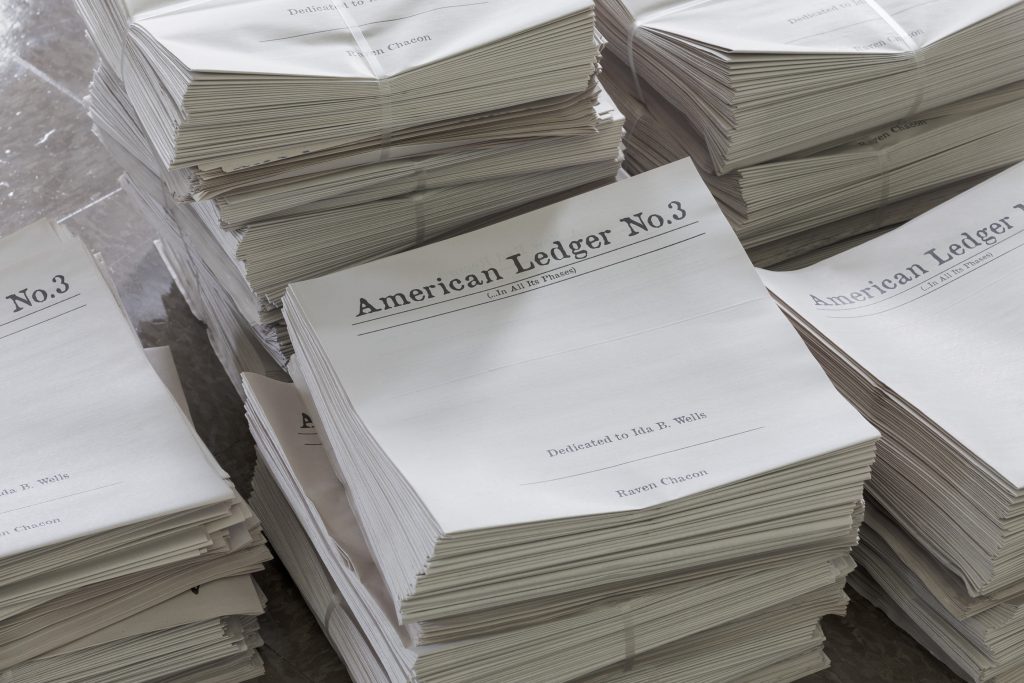 Contrasting the figurative works were many rooted in text. Across from “Kayhan Reading” is a pile of physical newspapers that visitors can take with them. These newspapers, titled “American Ledger no. 3,” by Raven Chacon, include the headline “LYNCH LAW AND THE COLOR LINE.” Here, the artist has written a new musical score along with words from anti-lynching activist and suffragist Ida B. Wells, originally published in 1893. A smart and challenging piece, Chacon brings forth histories that are difficult to confront and rarely taught, multiplying the power of these words by printing them hundreds of times in these stacked newspapers. Perhaps the more these words are read, the less this history will be ignored. Language and its aesthetics are reconfigured in Chacon’s work and again in the work of Huong Ngô. Ngô’s work, “It was her handwriting that ultimately gave her away,” covers an entire wall with pieces of paper, some with text from letters written by Vietnamese anti-colonial activist Nguyên Thi Minh, and others with text written in invisible ink. A stunning, largely monochromatic installation, the work gorgeously interprets the aesthetics of censorship and correspondence. How does one visualize a conversation between two people? How can thoughts and notes within pieces of historical research, such as the letters and books of Thi Minh, be shown? As Chacon’s piece aims to realize contested history through the production of words, Ngô erased the words, compelling us to give careful attention to what has been hidden from us. 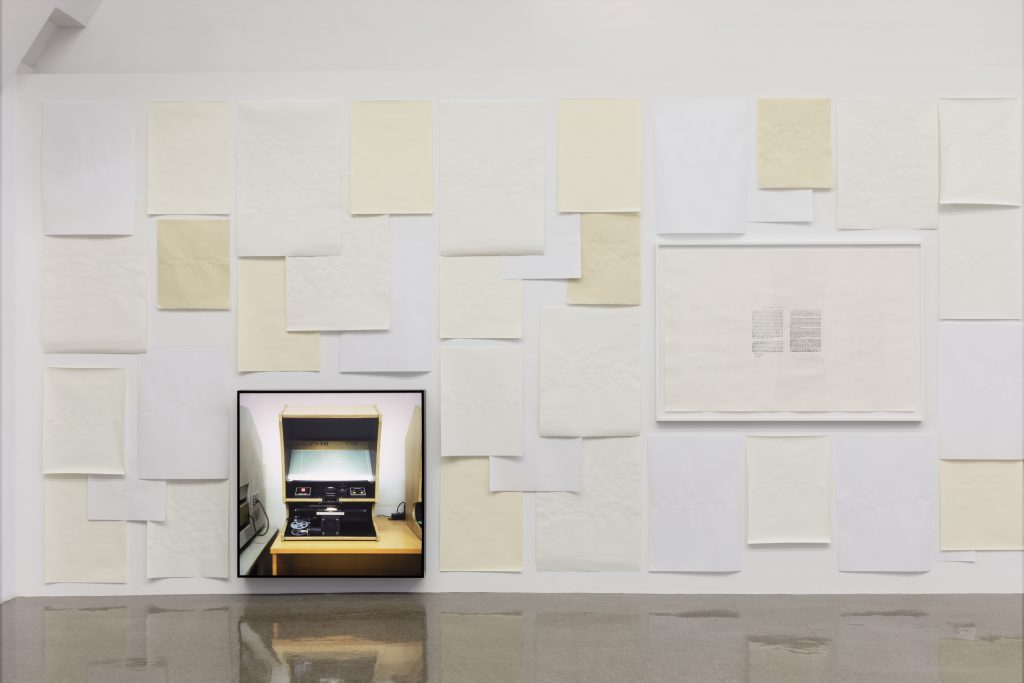 Huong Ngô, “It was her handwriting that ultimately gave her away,” 2020. Installation view in “Nine Lives,” 2020/Photo: Useful Art Services

The works in “Nine Lives” embody female experiences that are shaped by race, gender identity, sexual orientation and the differently abled body. A multitude of factors inform who we are, all of which change throughout time and depend on our surroundings. We are not the same person in every situation. Sometimes we code-switch to assimilate to our environment, other times we tone down a part of ourselves for our own safety. We are at the same time singular and many, reinventing ourselves and continuously becoming. Even standing amongst the works in “Nine Lives,” the subjects become someone else to me and I become someone else in relation to them. Together, the artists in the exhibition have recognized the individual experience of each subject while at the same time acknowledging that their identities are elusive, transient and evolutionary. (Christina Nafziger)

Nine Lives, through November 14 at the Renaissance Society, 5811 South Ellis. The curatorial essay is here.