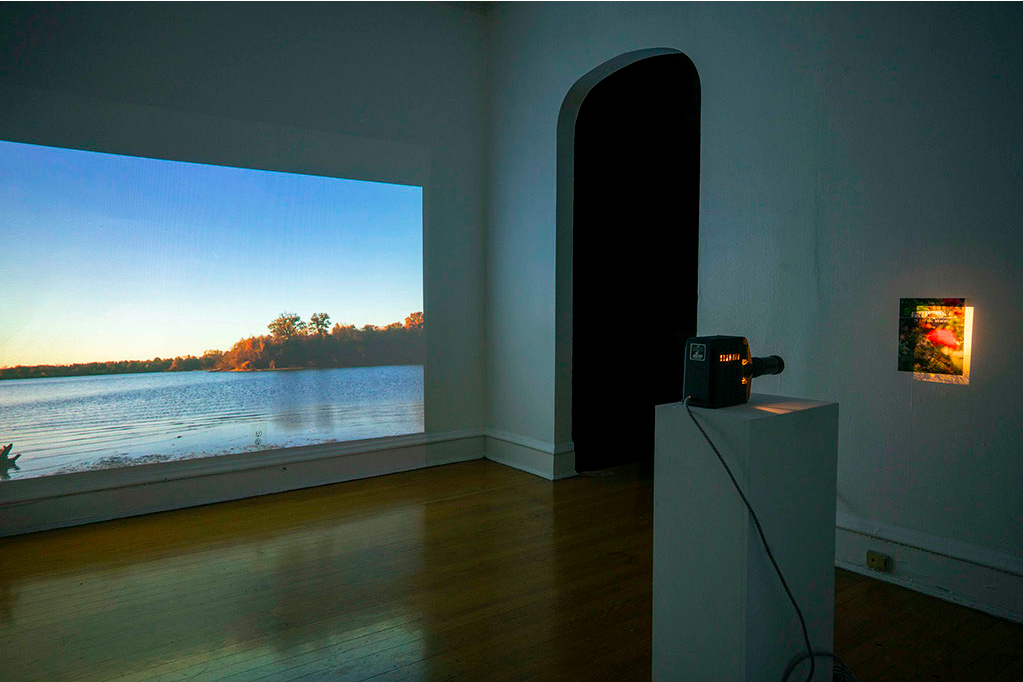 Anthony Hamilton, installation view of “Running from the touch on my back,” 2020

When his Illinois State University MFA thesis show was cancelled this past spring due to the pandemic, Anthony Hamilton did what artists must do more than ever: he combined creativity with resourcefulness. The result is “Running from the touch on my back,” a scrupulously installed, one-off apartment show in the place he had unfettered access to, his own home. The elements are four: a meditatively slowed-down video of a lake in Ireland named Lareen; the offering of a small pile of sea glass; a slide of a grave in a garden, doubly projected, like a sun setting, the glare simultaneously beautiful and painful; and a second video, a poem of static, spheres, waves and bodies, written in words and geometry. It helps to know that Hamilton’s grandfather’s father drowned in this body of water, a fact recounted in an accompanying catalogue alhough not in this version of the artwork. Regardless, the tone feels mournful, the effect memorial. An artist’s musings on loss is invariably driven by the personal, but in its expression it can reach out beyond the self to others. I, too, pick up sea glass by the shore. 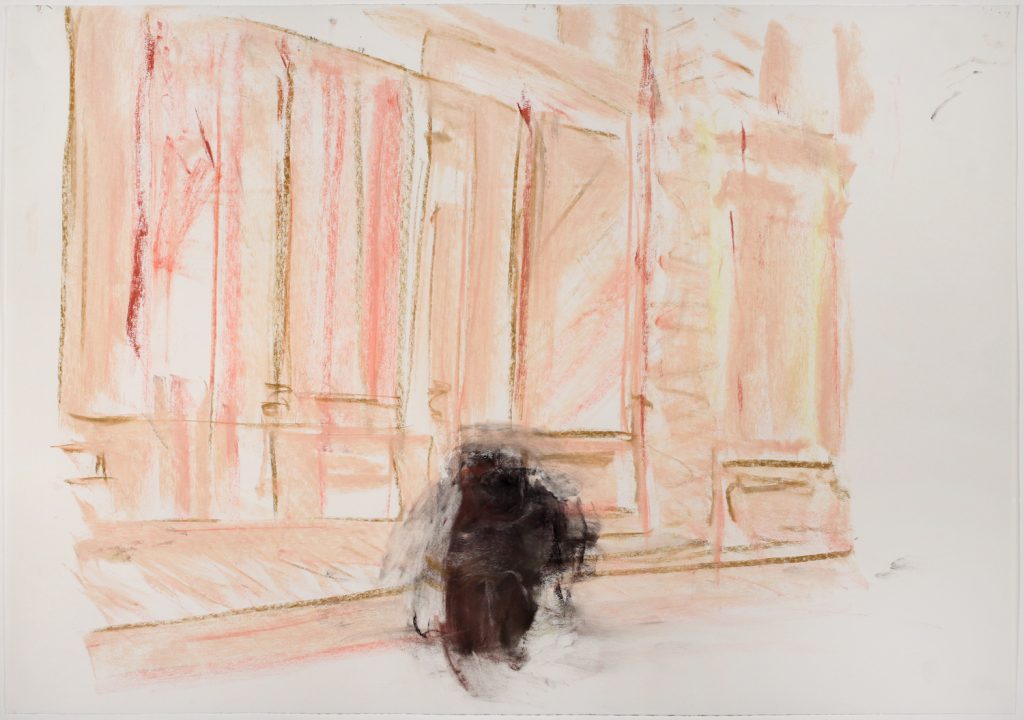 A researcher discovered recently that Edward Hopper copied some of his earliest paintings. No shame in that, just surprise, as artists have a long history of learning likewise. It seems fitting, then, that Terry Rosenberg has created his own spinoffs of Hopper’s oeuvre. Meant to be exhibited this fall at the Edward Hopper House Museum & Study Center, now delayed until next spring, Rosenberg’s seventy pastels reproduce the basic elements of their references, making “Automat,” “Cape Cod Morning” and many others recognizable in form. The same cannot be said for feel: emotionally the two bodies of work are worlds apart, and Rosenberg’s gestural strokes and visceral colors make all the difference. Imagine Hopper’s subjects crossed with Francis Bacon’s agonies, then add a dash of the luridness found in Degas’ brothel scenes. Not exactly pleasant, but maybe that’s just what we need, now that Hopper’s pictures have become so iconic it’s hard to really see the anxieties hidden under their surfaces anymore. 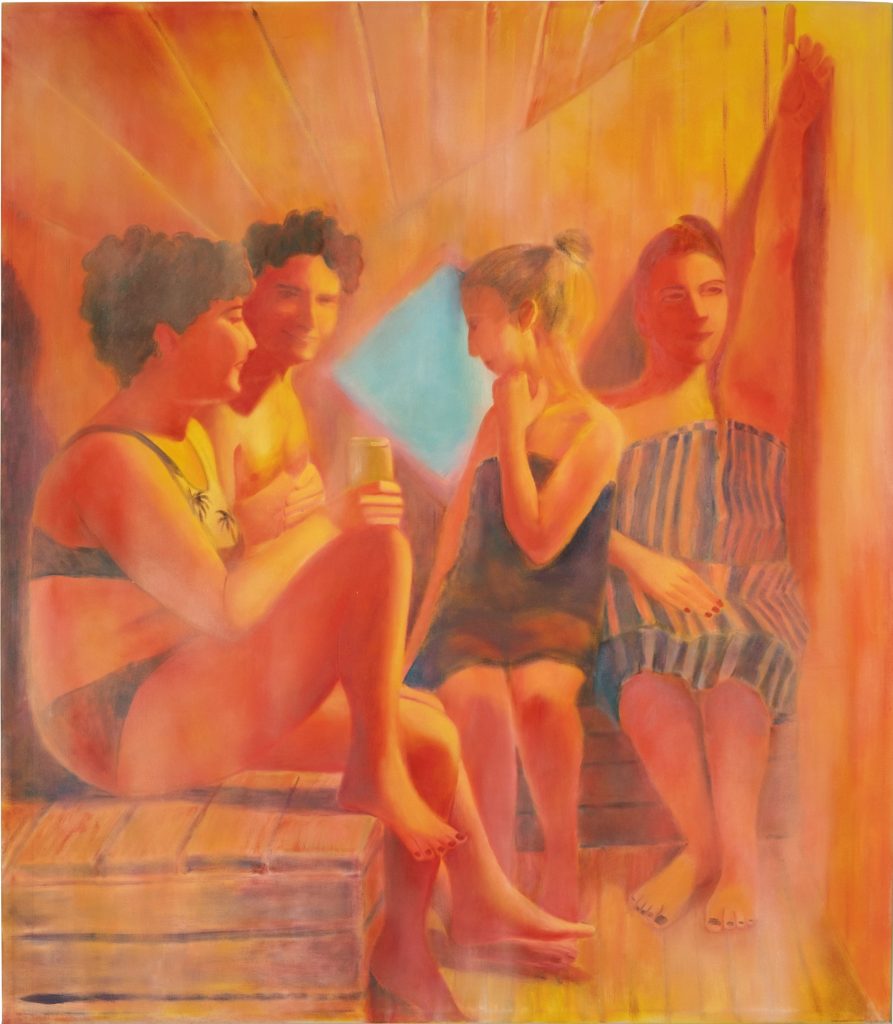 Countries around the world—though sadly, not the United States, excepting certain of its ethnic communities—practice the ritual of communal bathing. Japan has its onsen, Turkey its hammam, Russia its banya. Sarah Thibault, on residency in Iceland, did as one does and partook in the local sauna scene. The resulting oil paintings and graphite drawings, on display at Fahrenheit Madrid in a show originally set for May, exude warmth, relaxation and conviviality. Women, and a few men, figure in a style that owes something to Lisa Yuskavage, something else to Picasso’s classical phase. They bask in the sweaty orange glow of wood-lined cabanas, comfortable in their skimpy underthings and striped sarongs, having a drink, chatting, stretching and just otherwise enjoying a tradition that combines healthfulness and socializing, while simultaneously solving the problem of how to get through the long, cold, dark Nordic winter. Alas, looking at the pictures in Winter Woods right now, while virus cases spike worldwide, feels fraught. This is how it was. Will it ever be this way again? 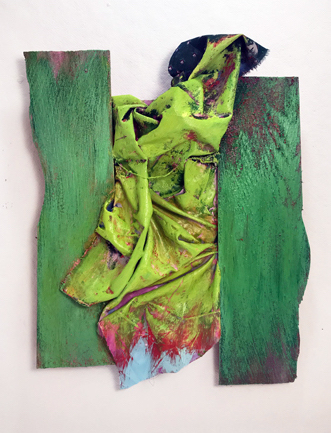 The art history of draped fabrics stretches back at least as far as ancient Greece, with the statuary to prove it. Michelangelo Pistoletto was the twentieth-century’s master of piled clothing; more recently we have had Kevin Beasley and Shinique Smith. Always present is a trace of the human, and this remains true in Grace Summanen’s own experiments building towers and filling closets with coloristically chosen garments. During quarantine, she has introduced flatness to an otherwise dimensional practice, using wood shingles to create supports from which ruched fabrics emerge, their forms stiffened with latex, all of it tinted with paint. Not all folds are created equal, and these ones alternately protrude loosely like labia, get their frilly folds stuck tight between fence slats, burst through in a froth of rage, hang like curtains at the base of a window shade. There’s color involved too, applied in monochromatic hues of blue or green, with unsettling undertones of red and pink, blood and flesh to the natural shades of sky and grass. 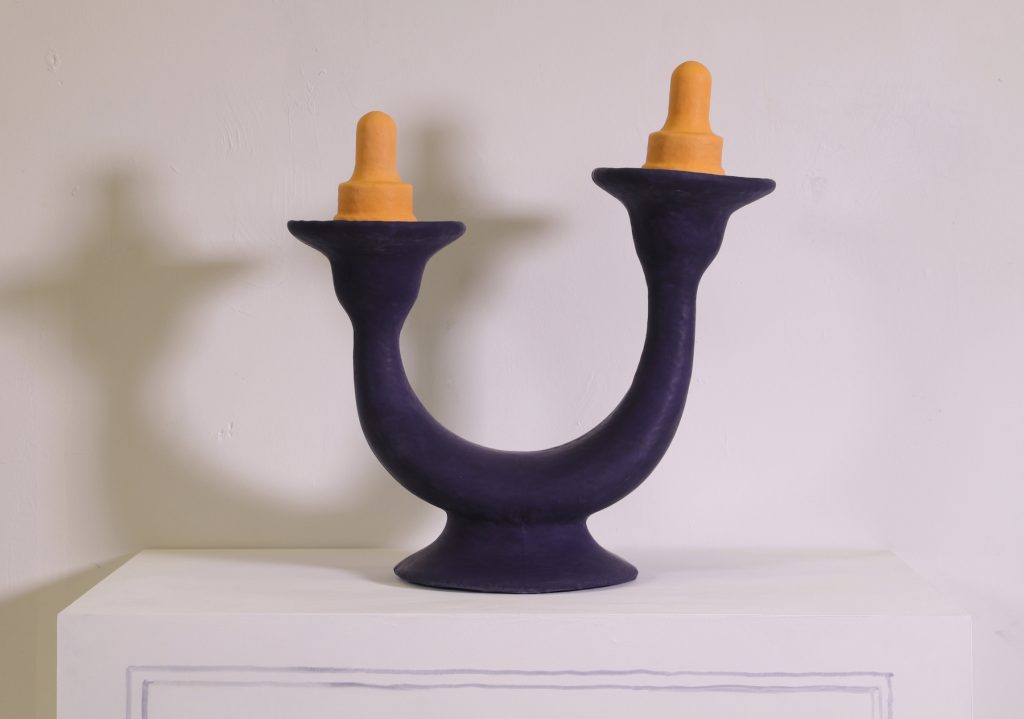 What’s the archetypal object in your home? Mine might be the handmade ceramic mugs I’ve collected over the years, a combination of eccentric one-offs that feel just right to me. For EXIT, a postponed group exhibition at an old warehouse in London, Nana Wolke created like items for figures from popular culture. The twin sisters from “The Shining” get a steel-framed diptych the size of a pair of twin beds (ha!), painted the innocent blue of their matching dresses, only in a quilted bedspread pattern rather than the stripes of the original. Willy Wonka—as played by Gene Wilder in the 1971 musical, not Johnny Depp in the 2005 remake or whatever you imagine him to look like based on Roald Dahl’s beloved children’s novel—becomes a wonky (ha! again) candelabra, its base the deep purple of Wonka’s coat, its nipple-like candles the bright orange of his top hat. Imagine living in a place where these were the beds, these the lights, their aura infusing the entire domestic scene with the losses and imbalances of childhood—innocence interrupted, fantasy gone askew, responsibility misconstrued. No one wants to live in the symbolic. (Lori Waxman)