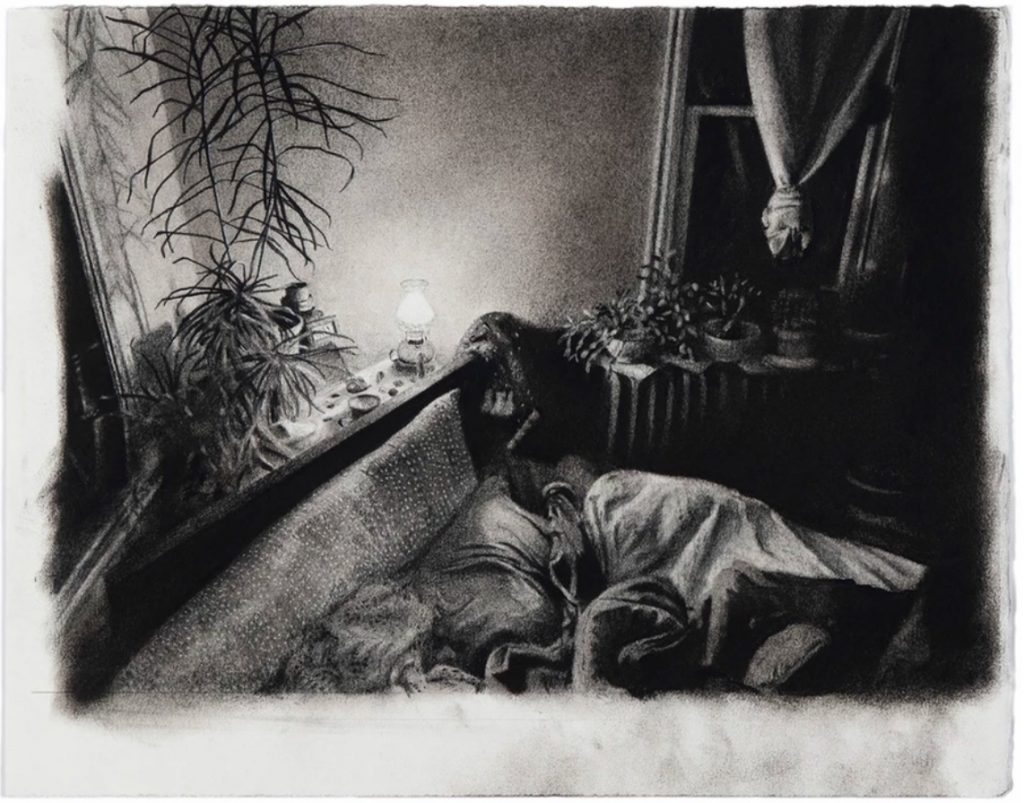 The bedrooms in Erin Fostel’s tenderly realist charcoal-and-pencil drawings are the antithesis of the minimalist chic trending in shelter magazines. Verdant with potted plants, draped in patterned fabrics, personalized with mementos and art, they appear entirely and unselfconsciously lived in. Indeed, most of the beds are deep in rumpled sheets, quilts and dented pillows, impressed by the forms of the women who sleep there each night. That’s the theme of Fostel’s series, chambers belonging to one woman only, and it was well reflected in the title of her spring exhibition at Baltimore City Hall, “A Room of Her Own,” with a nod to “A Room of One’s Own,” the iconic Virginia Woolf essay. Sadly, the show was shuttered due to the pandemic, a closure that feels symbolically related to the even sadder state of the current administration’s attitudes toward women. As Woolf argued back in 1929, women need their own space, both literally and figuratively. Too many today, in the U.S. and elsewhere, don’t even have the safety of a private bedroom for retreat. 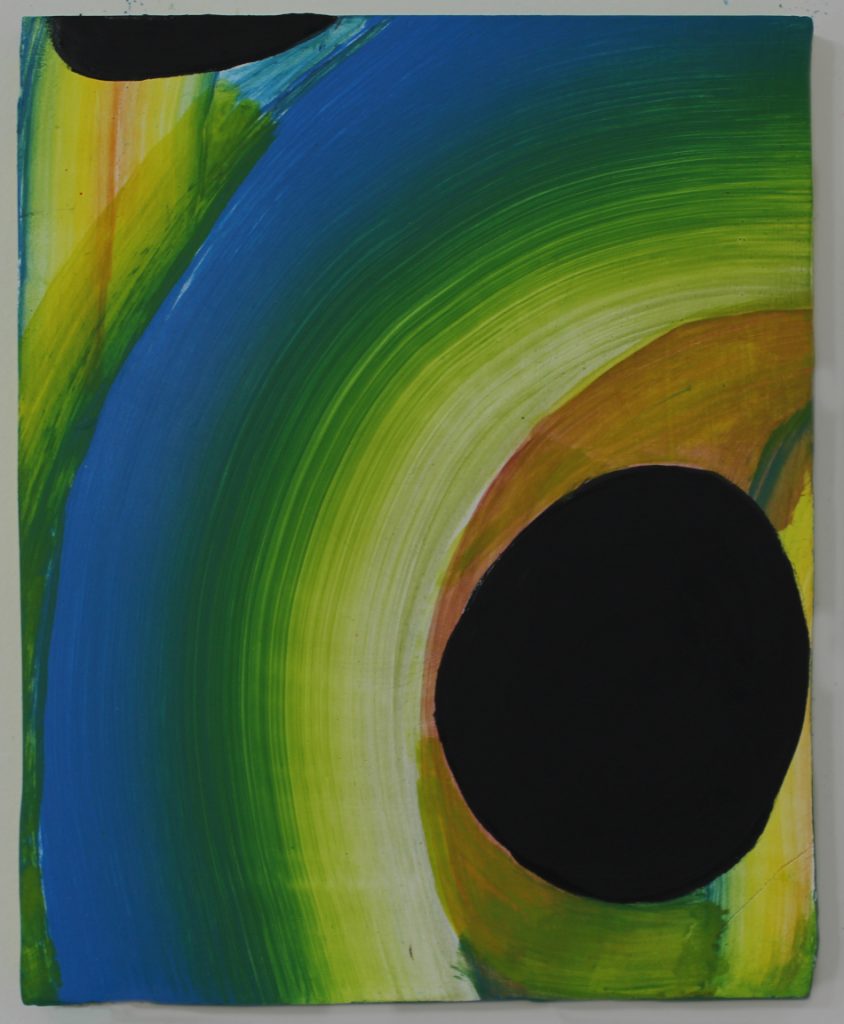 Strong is the temptation to lean on an abstract artwork’s title, especially a spiritually suggestive one, for clues to its intended meaning. Strong, too, is the desire to read the impact of the coronavirus pandemic on anything created since it began. The oil paintings of Shayna Miller are no exception to any of this. Her eight-by-ten-inch panels adopt the size and intensity, if not the pictorial content, of religious icons, and we need all the help we can get. So, while “Gezerah” illustrates none of the rabbinical ordinances issued to promote better observance of Biblical laws, its messy textures, its dark, envious hues and the wooden dowels affixed upright on its surface suggest the need for barriers to bad behavior. Though there may be no Noah’s Ark in “Ablution,” there are wide vertical brush marks cut off by a prismatic horizontal one that sweeps up in an arch, offering the cleansing relief of a rainbow after the storm. Notably, “Amulet,” with its circles of blue and black, actually looks like a nazar seen up close, as if Miller, aware of the grave need to ward off evil in the world right now, decided to take no chances. 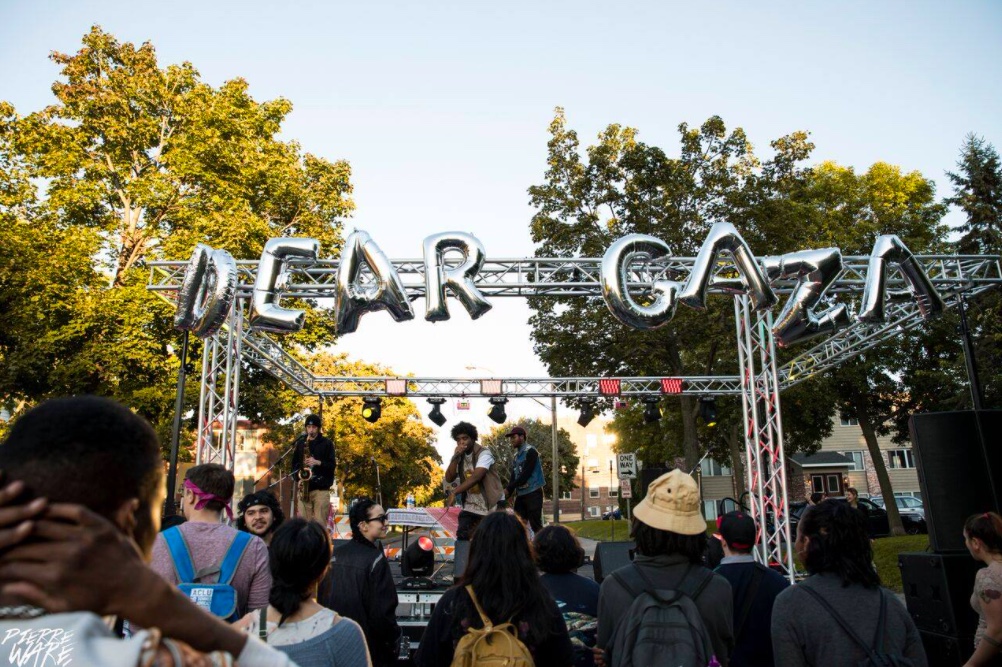 Our local block party was cancelled this August due to COVID-19. As much as my neighbors and I missed it, a far greater loss has been the ending of Dear Gaza, an outdoor shindig-cum-fundraiser-cum-humanitarian event that would have been in its fifth season this year. Founded by Karmel Sabri, a Palestinian-American artist, the daylong festival filled the intersection of West 24th Street and Lyndale Avenue South in Minneapolis with a selection of live music, spoken poetry, dancing, food and people notably younger and edgier than those typically found at a community cultural fest. A lot of that is what a good street party will always do, but Dear Gaza was different because it was also an act of resistance. To celebrate Palestinian people and culture in the United States, and to do it loud and proud and fabulously, is to offer an alternative to the polarizing narratives much more commonly told about Palestine in the media and in academia, left and right. Dear Gaza insisted on the necessity of public visibility, participatory culture and, above all, radical fun. 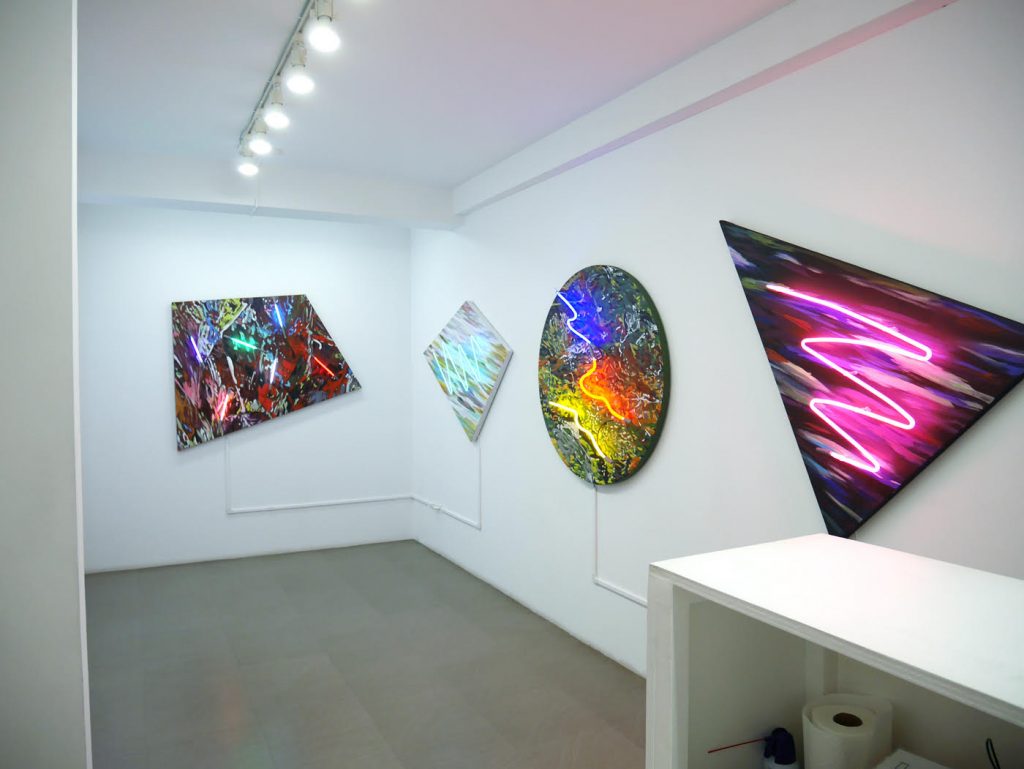 A painter of irregularly shaped drip and spatter pictures, and a maker of graphically precise neon sculptures, it was only a matter of time before Morgan Sims put it all together. The resulting exhibition, “Camouflage for Earth,” on limited view this past summer at Bert Green Fine Art in Chicago, contains canvases in vivid all-over patterns of camo, gesture and blur, each topped with a haloing dash of colored neon. The overall effect is strangely cinematic, evoking images of movement in a dark and rainy futuristic city, like watching “Blade Runner” through a squint. If that’s not sexy and disorienting enough, note that the show feels very different depending which way you tilt your head. And do: the paintings, though wall hung, have no given orientation, a state enhanced by their being circles, triangles and trapeziums. Imagine “Nightshade” and “Lava” displayed flat, and the excitement of circling them as a viewer. 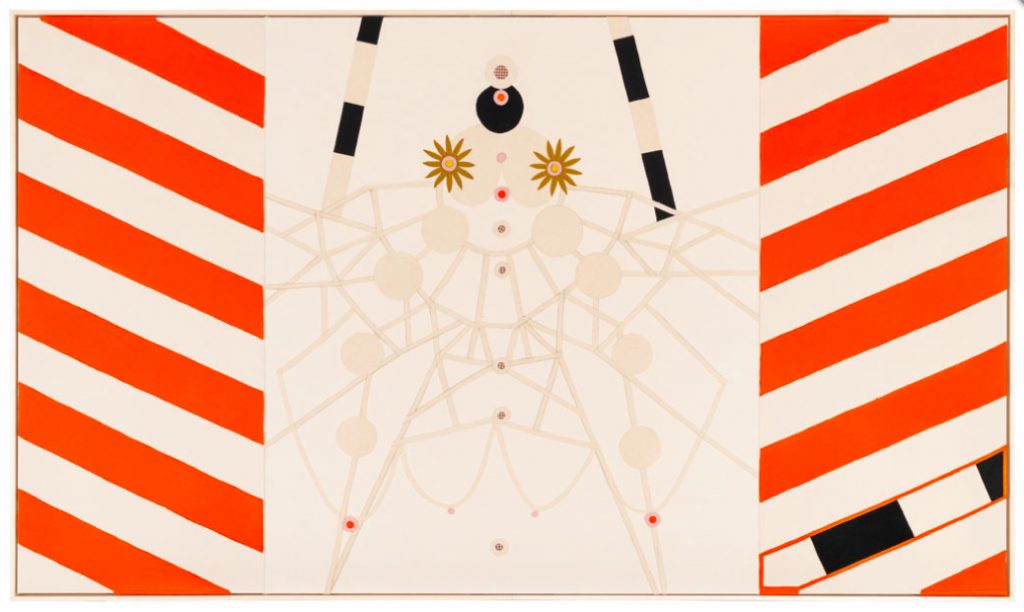 Life exists not just in pulsing creatures and plants, but also in fabrics and patterns. I know this from “The Devil’s Daughter Is Getting Married,” a folklorically titled solo show by Diana Guerrero-Maciá, mounted but essentially unviewable this past spring at Carrie Secrist Gallery in Chicago. To make her unpainted paintings, Guerrero-Maciá stitches together scraps of wool and linen, strips of deconstructed old clothing, even sometimes pieces of vintage wooden toys, aligning them all in geometric configurations on large canvases. In the hands of some other artists, the end result could easily be an eclectic mess or a rigorous ordering of things; under the care of Guerrero-Maciá, sentience appears. Sometimes this is obvious: the pink and black eyes staring out the center of “Born in the Sixties,” the white-on-white breasts and bellybutton near the bottom of “The Let Down.” Other times it is more of a feeling: the stone left atop the frame of “A Perfect Day,” the fizzy orange aperitif bubbles in “Italian Summer.” Look closely, and know that something is looking right back at you. 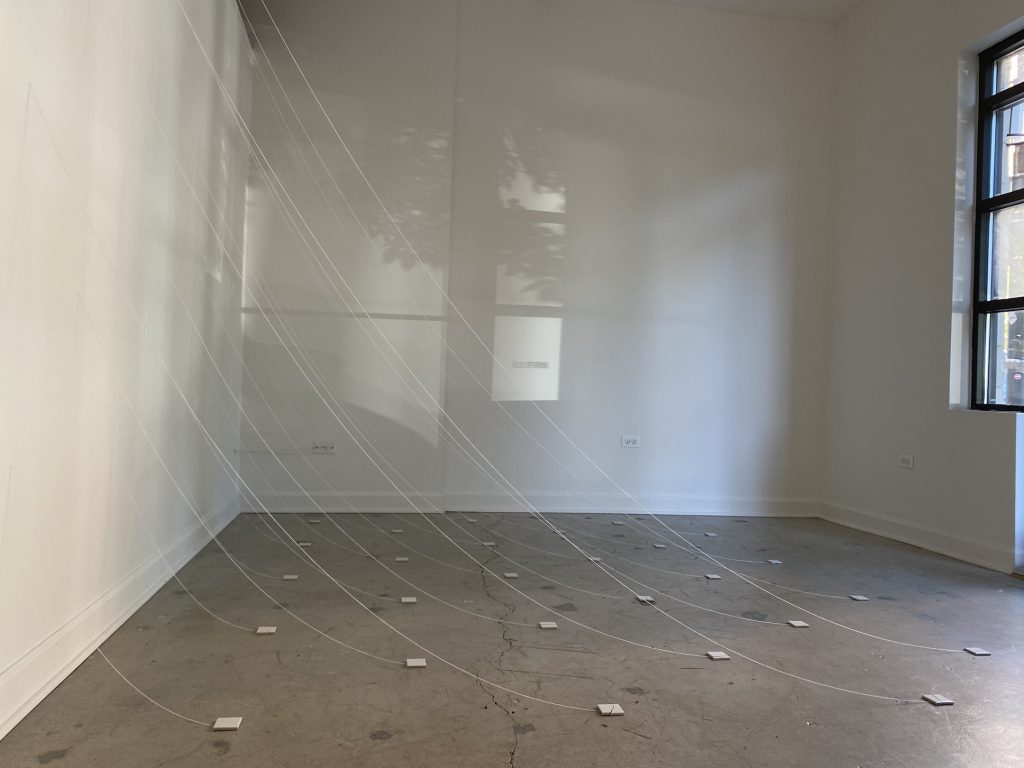 Invisible lines connect everything: the points on our bodies, individual people living across the globe, the climate to your heating bill. Sometimes artists find ways of making those lines visible. Kurt Schwitters’ Merzbau began when he tied strings between items in his studio, then filled them in with plaster. Since 2015, Rana Siegel has been hanging lengths of cotton twine from a clothesline, attic rafters, a bookshelf, a deck railing and anchoring them to the floor with small white tiles. She calls these installations “Slack,” the most recent iteration of which took place at Material Exhibitions in Chicago. There Siegel arced forty-one threads from white wall to concrete floor, like snow seen in headlights, and she posted videos of herself moving delicately between the swoops. Photographs reveal what seems like a dozen different artworks, depending on the angle and light. Closeups indicate that many of the artist’s ceramic anchors have developed cracks, a state which reflects the gallery’s fractured floor, as well as the way so many of us are feeling right now. How comforting it is to note that even broken tiles can hold a thread in place. (Lori Waxman)