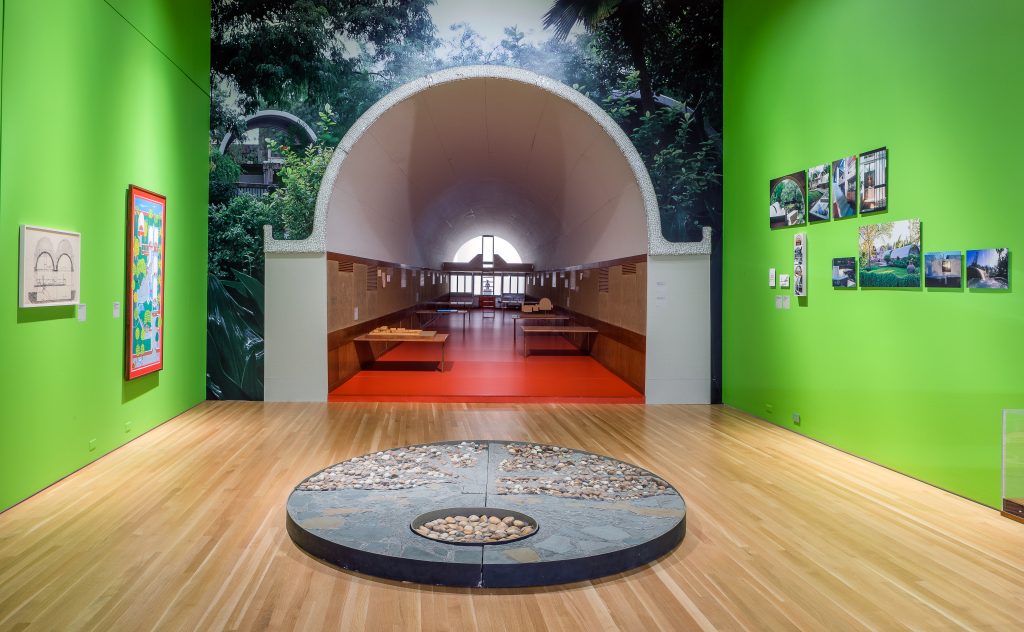 “Architecture for the People” chronicles the work of Indian architect Balkrishna Doshi using a range of aesthetic devices that allow the viewer to experience Doshi’s architecture from multiple perspectives: straight-on, through photography; above, through scale models; behind-the-scenes, through preliminary sketches, blueprints and notes; and even from within, through built environments that replicate select architectural structures. These interactive elements allow the viewer to step inside structures such as the architect’s studio and the architect’s home in Ahmedabad, India. Other components have been constructed within the halls of the Wrightwood, such as doors from the Hutheesing Visual Art Centre (Ahmedabad, India, 1978) and the Lalbhai Dalpatbhai Institute of Indology (Ahmedabad, India, 1962), isolating elements to draw our attention to their details. What’s more, there is a surprising inclusion that I would not have guessed to see in an architecture exhibit, but which brought elements of saturated color, two-dimensional design, and even more artistic ability into the breadth of work on display: Doshi’s collaged paintings based on traditional Indian miniature paintings.

Although heavy in information—as to be expected, since Doshi was a prolific architect and there are many aspects of his work to discuss—the built structures within the exhibition allow for pause and reflection, a chance to interact with the architect’s work and experience the space as it relates to his often-communal design. Softening this edge of information are the extremely knowledgeable (and approachable) gallery attendants, who walk around the space as a resource for visitors. For those of us who did not study architecture and who may not know much about Indian culture and city life, these attendants are vital in connecting the viewer to the importance of Doshi’s work in India as well as his impact on the field of architecture.

In Sangath architect’s studio in Ahmedabad, India (1980), the structure is both above and within the ground, with vaulted ceilings—an element that recurss in the show, as in the art gallery Doshi designed for sculptor Maqbool Fida Husain (Amdavad ni Gufa, Ahmedabad, India, 1994). The studio, Doshi’s personal design studio, has been partially constructed inside the Wrightwood—that is to say, inside a wall. Yes, the viewer may physically step into a large whole cutout of the wall, and into a hallway that looks like the inside of the studio, complete with working desks and sketches tacked to the curved walls. Once the viewer steps in, you see a sculpture in the distance, which you can walk toward, but only so far. Ingeniously, this space appears to recede in the distance, but is, in fact, just getting smaller. Its immense depth is an optical illusion that cleverly allows the viewer to experience this vast and gorgeous space. Details were not spared. Influenced by Antoni Gaudí, who designed Park Güell in Spain, Doshi included broken ceramic tiles in the design, forming sprawling mosaics that are included in part in the exhibition. 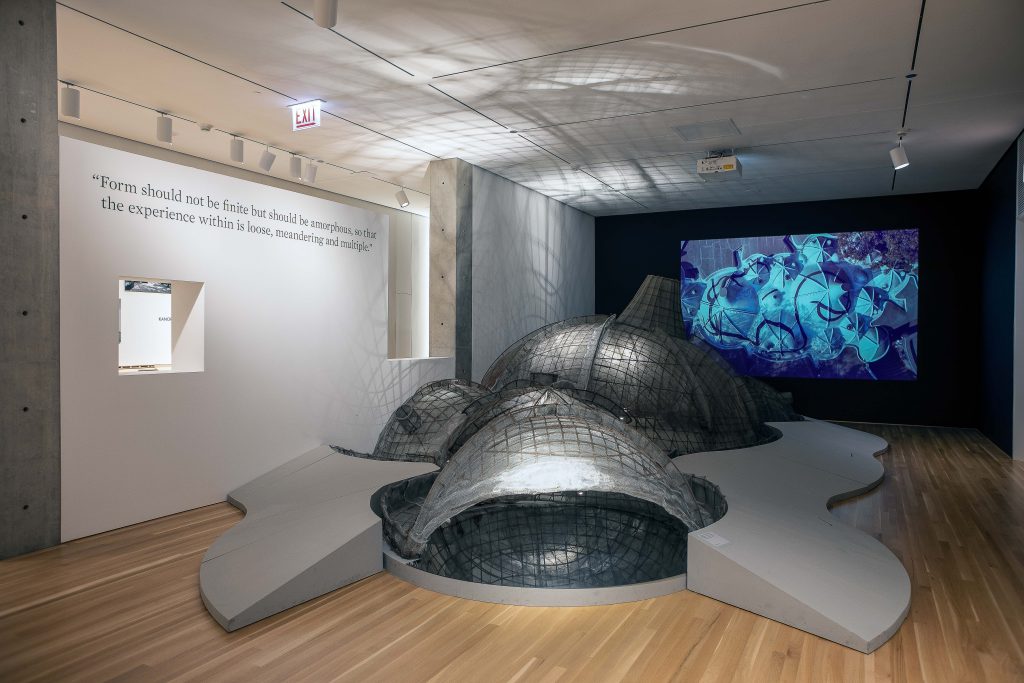 The exhibition moves fluidly through four sections: Shaping an Integrated Education, Building Academic Institutions, Creating a Livable City and Home & Identity. Although diverse, the four parts have one parallel ideology that rang clear: dialogue and interaction, or, in other words, community. In Doshi’s design, whether for a campus, design studio, gallery, or low-cost housing complex, his belief in the importance of communicating with one another comes through. He plays with space in a way that opens and expands, guiding those within it to pause, encouraging a spontaneous interaction between the person and their environment, or between the person and others. Within the walls Doshi designed, he meant to break down barriers, open up the space and mind through structure and city planning. His design was meant to be “for the people,” encouraging community, and therefore, a sense of identity and belonging. (Christina Nafziger)

“Balkrishna Doshi: Architecture for the People,” Wrightwood 659, 659 West Wrightwood, through December 12. Please note: Wrightwood 659 has temporarily closed in accordance with State of Illinois restrictions. Visit the website for a series of upcoming virtual programming at https://wrightwood659.org/