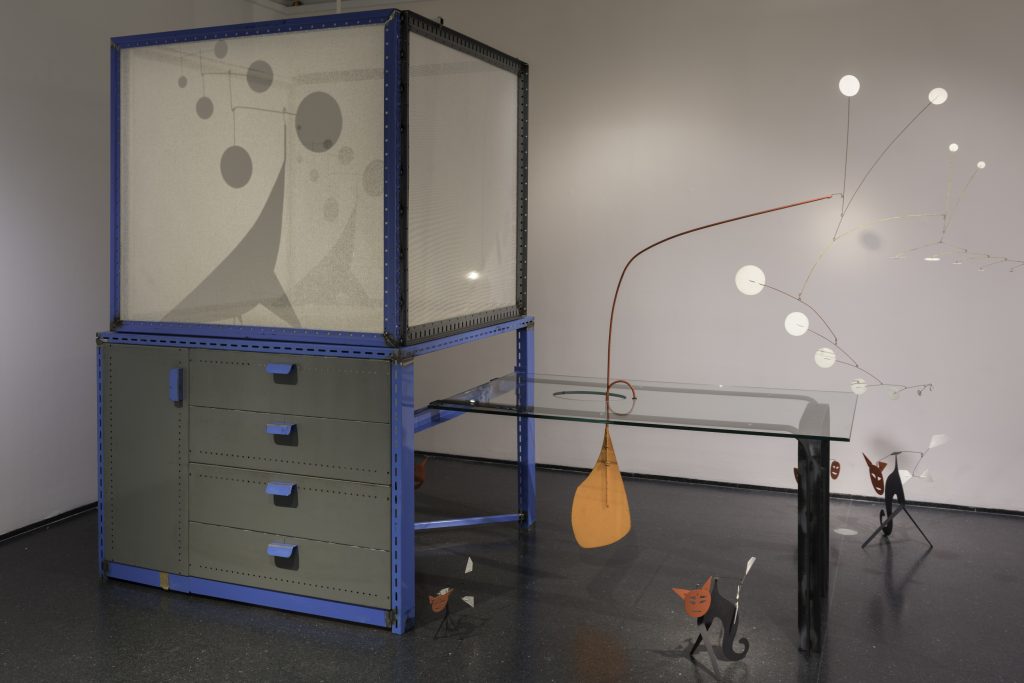 So beloved are Alexander Calder’s mobiles that it can be hard to notice anything else about them. Hence the need for Becoming the Breeze, Alex Chitty’s no-holds-barred intervention in the MCA Chicago’s dependable exhibition of Calder’s sculptures, the constancy of which turns out to be a concerning condition of their longterm loan. Chitty offers pretty much everything except a straightforward display: Calder’s sculptures appear photographed mid-installation, dispersed in pieces, tucked in their storage containers, replicated many times over, spun about in frantic motion and as just a silhouette. The effect is to highlight nothing about Calder and everything about private versus institutional collecting, the practices of conservation and warehousing, modes of presentation and curating, the importance of originality and the metrics of high art valuation. It’s witty, too, the gallery being overrun with “A Bunch of Pussies,” Chitty’s increasingly incorrect knock-offs of Calder’s “Chat-Mobile” (1966), amongst whose ever-growing litter lurked the original. Meow. (The show, organized with Raven Falquez Munsell and Jack Schneider, ended a month early due to closures.) 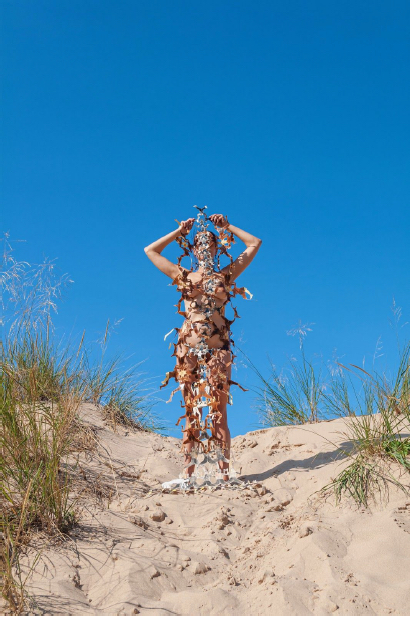 Looking uncannily like a heroine risen off the pages of a mythology book, Monika Plioplyte stands nude in a wheat field, on a sand dune, surrounded by prairie grasses, her body draped in paper latticework based on traditional Lithuanian designs. Half-submerged in a pond, she’s surrounded by water that repeats her garment’s motif. (Nature is full of patterns.) The artist weaves and collages these textiles, which also come in the form of wall-hung tapestries, from hundreds of tiny female bodies, risograph-printed cut-outs of poses that mimic the ancient pagan goddesses of Eastern Europe. Colored in sepia, black and red, the images’ solarization imbues a vision of glowing female power emanating not from a single but an intertwined mass of women. Though in actuality they are based on the printmaker’s own figure, in spirit they recall Ana Mendieta and all the other female land artists of times past and present, a sisterhood to which Plioplyte undoubtedly belongs. 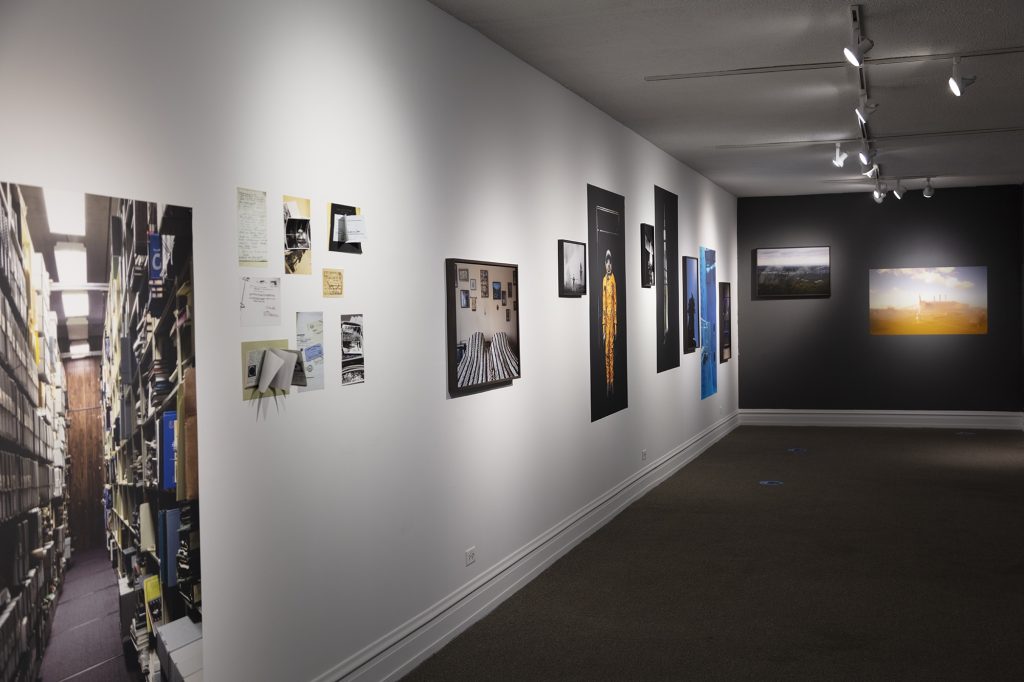 After the end of World War II, the U.S. government imported top Nazi scientists like Wernher von Braun, who moved to Huntsville, Alabama, and helped put the first Americans on the moon. Morality is rarely clear in the deep messes of history, politics and war, including those explored in Barbara Diener’s cleverly named project, “The Rocket’s Red Glare,” recently viewable by appointment at DANK Haus in Chicago. Diener reproduces elements from von Braun’s archive; pictures her friends posing as Jack Parsons, a founder of the Jet Propulsion Laboratory; takes beautiful arboreal photographs in Alabama and California; substitutes 480 screen shots of Peenemünde, where von Braun developed the V2 rocket for Hitler, for photos she could not take in person due to COVID-19 travel restrictions; piles up a wall of handmade black latex sandbags, with a nod to Nazi fetishism; and composes photomontages overlaying Nazi propaganda images with her own of the American landscape. The overall effect is to remind us of the enmeshments of past and present, individual and country, right and wrong. 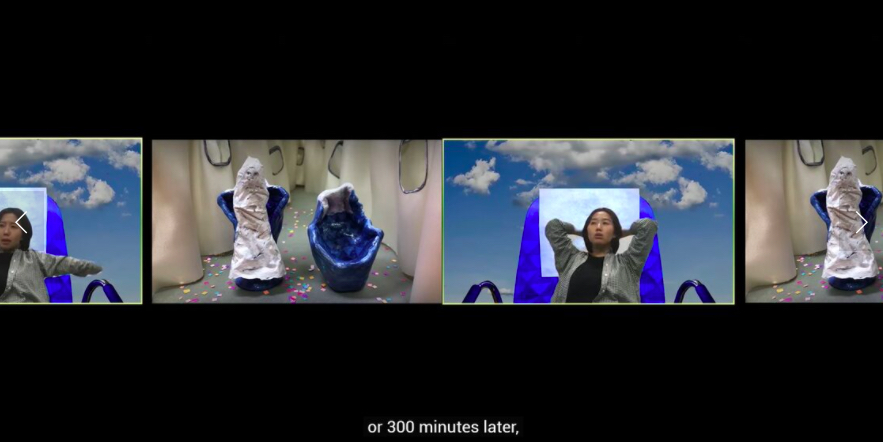 Stills from “Turbulence and the White Girl,” 23:48 min livestream Zoom performance by Dasul Kim in collaboration with Eun Ho Park, 2020.

Could anything be more quarantinesque than a twenty-three-minute livestream performance on Zoom? Art emerging in difficult times—exile, war, illness, pandemic—often comes formatted in ways reflective of the maker’s situation. So it is in the case of “Turbulence and the White Girl,” directed by Dasul Kim. The turbulence of the title is aeronautical, the girl a woman sheathed in white from head to toe. Her spectacular whiteness is analyzed for its relationship to power and geography but also, insightfully, for its ghostliness, its neutrality, its nothingness. White is never just white. The scenario arrives via two Zoom windows, one featuring a naïf diorama of a plane interior occupied by a little white puppet, who acts out the strange, dreamlike occurrences recounted by the actor Eun Ho Park, narrating from a second window while posed against a giant airline seat background. The total effect, swayed by almost unbearably intense music, veers from dreamlike to nightmarish, much like life these days.