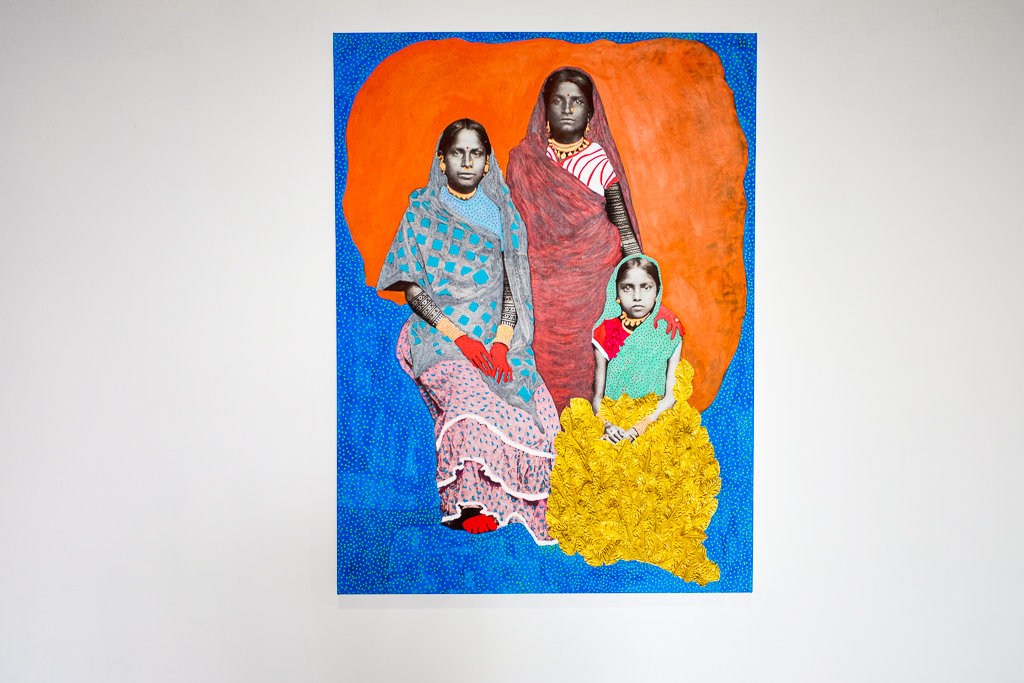 Back home in Colorado, Renluka Maharaj, a School of the Art Institute of Chicago alum, is known as a photographer, one who incorporates performance and self-portraiture to analyze societal power structures that relate to identity, gender, sexuality and religion. She began to research and incorporate colonial structures, as her family history unveiled a past not often talked about in history books. In the past year, her work has vastly shifted in the medium she uses, and the vessel that it comes from, yet the explorations remain the same.

Maharaj began working with found images of her family members in an exhibition, “Home, Is A Place Called Home” (2019), which featured traditional portraits of her family that she painted over to incorporate rich colors and textures, juxtaposing modern and traditional Trinidadian clothing as a nod to her own intersectionality, being born in Trinidad and Tobago and growing up in the States. After completing a 23andMe DNA test, Maharaj learned that her mother’s side of the family were once indentured servants in India, as were over a million Indians under British rule in the mid-1800s after slavery was abolished. This discovery inspired her first Chicago solo exhibition, “Pelting Mangos,” at Flxst Contemporary, which features nine multimedia portraits of Indian women who were indentured servants during the nineteenth century, based upon archival images taken by Felix Morin. The photographs, like her earlier family portraits, are embellished, and for Maharaj, are part of her ties to her roots.

“Every Indian is connected to every other Indian that was brought over as indentured laborers, whether it’s my personal family history or not,” Maharaj says. “When I was working with this latest work, I felt any one of these women could be a relative because the records kept are not totally reliable. I have some information on my mother’s side but so much is missing. I have yet to find information on my father’s side. This is only the second time I have worked with found photographs and I have found them to be more emotionally challenging because I feel I have to honor the people in those images. Growing up, we thought of images as sacred, they should be treated with respect, not torn or thrown out.” 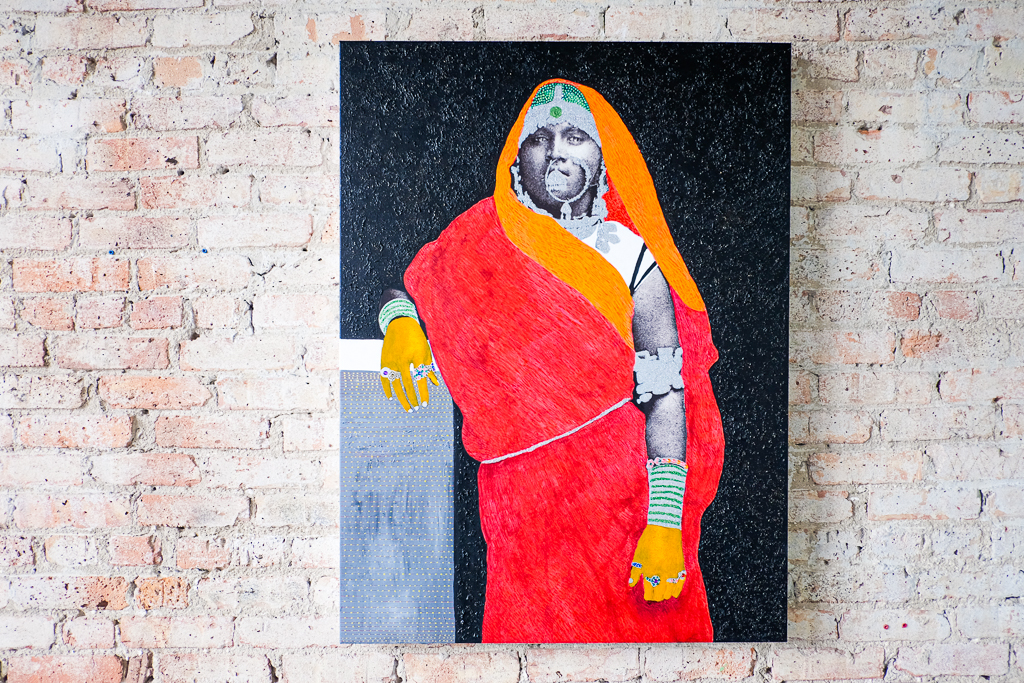 When looking at the images in “Pelting Mangos,” one would think they were looking at royal families or deities, instead of “coolies,” as they were called then, who worked for low wages and within inhumane conditions that were photographed in a way that glorified their “trauma,” as Maharaj notes is true for how most Black and brown bodies are presented.

“These multimedia works serve to decolonize Morin’s archive,” Jan Christian Bernabe, the gallery director of FLXST, says. Maharaj chose to feature nine women, which she named after women in her family, because they represented the nine forms of the goddess Durga, the principal Hindu goddess of war, strength and protection. The vibrant colors also nod to the colors associated with each goddess. Maharaj places the women in meticulously painted settings inspired by her memories of living in Trinidad as well as the landscapes of Colorado—some are in fields of green grass, red flowers or checkered or dotted backgrounds of intricate design.

“They are named after women in my family because it was so important to me to be respectful and honor them the right way. After all, they are ancestors,” Maharaj says. “I had stories in my mind while I worked on them because that allowed me to make each person unique, as they should be for they are sisters, wives and daughters, not an object to be commodified.” Maharaj depicts the women, like in the piece, “Indira,” draped in fabrics and cloaked in silver and jewelry from the head to the hands, or like “Susila,” who appears to be standing in a grand entrance adorned in gold, as a way to showcase their wealth during that time. If you strip them down to their bare essence though, the images are quite striking on their own.

“Some of the women are looking directly at you, which was jarring for me as I spent hundreds of hours looking right back at them,” Maharaj says. “‘Ma’” was the most difficult canvas to work on—she has this intense stare like she’s looking into your soul. I would speak to all of them while I worked, asking them questions, playing music, dancing. I was worshipping without knowing, the way I worshipped with my mom in Temple or at home at her shrines.”

Maharaj sees this work adding to a larger conversation not only about an untold history, but also about victimization and how it is displayed in art, especially now, when much of the art world has been inundated with long overdue conversations about access, diversity and equity. These are in fact many of the topics and themes the work at FLXST Contemporary touches on, as they work with diasporic, immigrant artists, LGBTQ-identified artists and artists of color based in Chicago and across the country. The artist chose to title the show “Pelting Mangos” for that very same reason. Mangoes, the traditional fruit of India, are often so desired that many resort to violent acts to retrieve them, which Maharaj says reminded her of the place in which the photographs were obtained. Indentured servitude was an unfortunate result of the British attempt to maintain power through cheap labor for the production of goods like coffee, sugar, tea and cotton.

“I wish for people to know this history because it’s important,” Maharaj says. “These people existed, breathed life, had stories, pain, love, families, success and failures. They were just like me and you with hope and desires.” (Ciera McKissick)

“Pelting Mangoes” is no longer on view, although exhibition images are available at flxst.co/renluka-maharaj-pelting-mangoes.