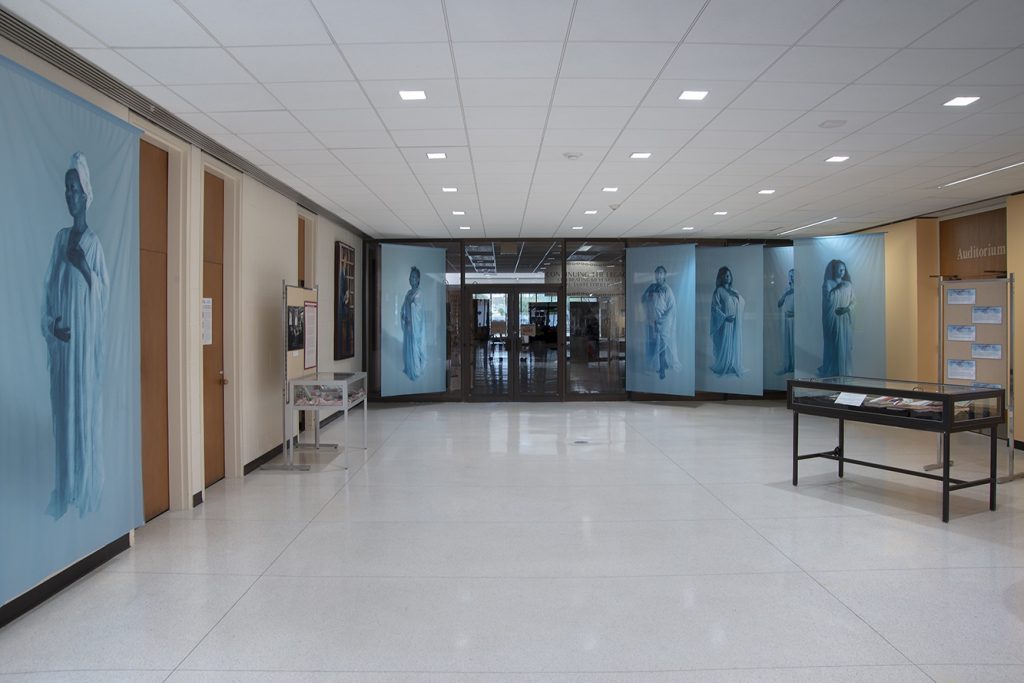 To mark the hundredth anniversary of the passage of the Nineteenth Amendment, Ginny Sykes created a hundred banners featuring larger-than-life photographs of women. Her subjects appear at once deeply individual—diverse in age, size, shape, color, heritage—and profoundly united. Uniformly draped in long pale mesh gowns, posed in three-quarter view, with hands on heart and stomach, they stand as stately as do all those statues of famous white men found the country over. Titled “100 Woven: Collaborations Beyond the Veil,” the banner women act as a rejoinder to the surfeit of male memorials and the dearth of female ones. (Chicago has only two public monuments to women, more if you count fictional figures, which, let’s not.)  And they do it in their own way, being made of a lightweight sheer fabric not forever bronze or stone, being a collective of regular individuals rather than a smattering of idealized heroes. They’re flexible and mobile, too: though an installation and performance in Naples had to be cancelled due to the pandemic, Sykes was nevertheless able to install six banners, all featuring African-American women, in the Woodson Regional Library on the South Side of Chicago, and has plans afoot for more. 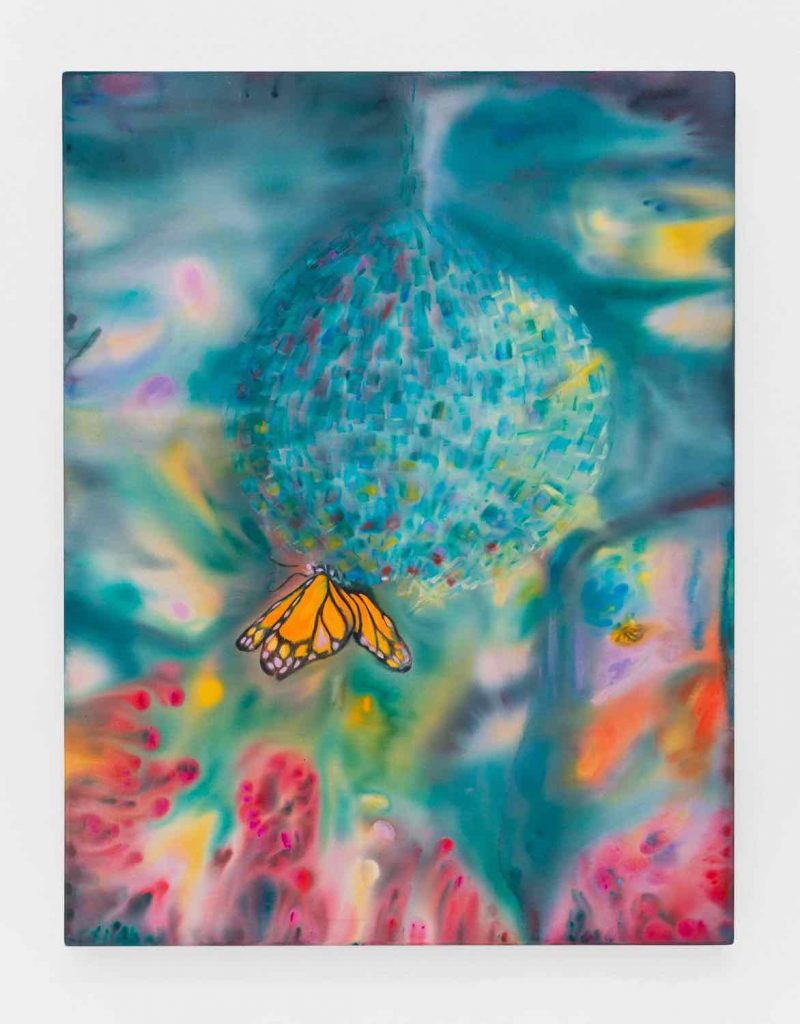 Perhaps you’ve never wondered what it would feel like to be a monarch butterfly drunk on Aperol Spritz. That’s a shame, but one that can be rectified by allowing Alejandro Jiménez-Flores, also known as florencio, to introduce you to kiki, the subject of a series of radiantly kitsch paintings on view at Adds Donna during the virtual NADA Chicago Gallery Open earlier this fall. The pictures include gouache-on-muslin illustrations of kiki’s fabulously inebriated soirée, featuring shimmery lights of all colors, and a pair of small, psychedelically dyed silk rondels that suggest the exciting but worrisome effect of alcohol on kiki’s eggs. It’s unclear if kiki is florencio’s alter ego, although it seems a strong possibility: in a video on the exhibition website, the artist relays kiki’s story as a poem, told with great empathy and all the gender fluidity of metamorphosis. Besides which, who wouldn’t want to envision themselves gorgeously patterned and dancing through the air under a disco-ball moon? 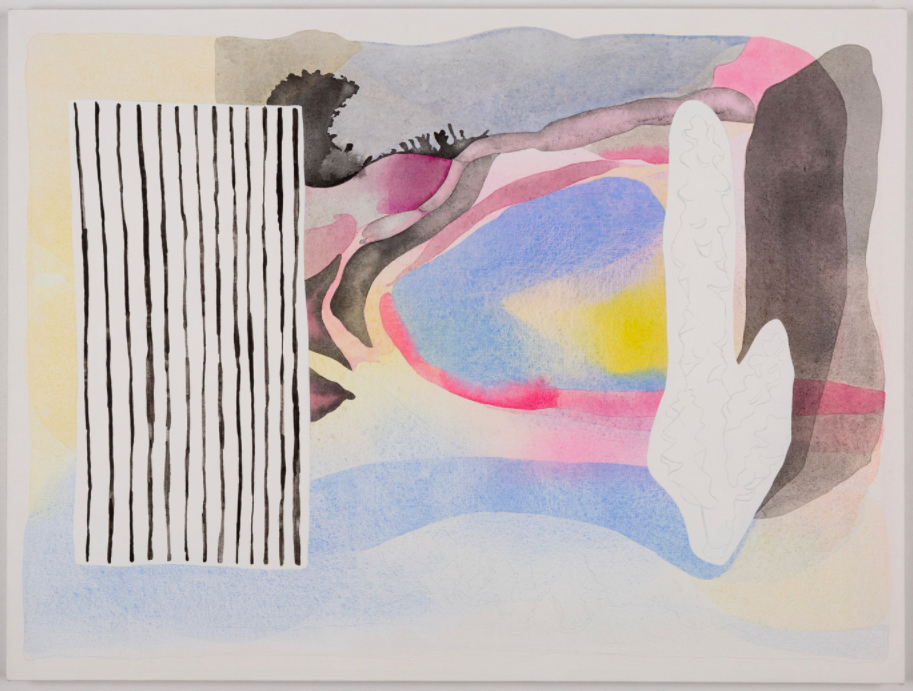 An Instrument in the Shape of a Woman

If not for the pandemic, three of my favorite Chicago artists, all of whom are women, all of whom are over forty, and all of whom create riotously colored abstractions that sometimes find their way into deceptively charming stop-motion animations would be filling the ground floor of the Chicago Cultural Center right now. “An Instrument in the Shape of a Woman,” named for a line in “Planetarium,” a poem by Adrienne Rich celebrating the eighteenth-century astronomer Caroline Herschel, has been indefinitely postponed, but let’s nevertheless imagine what we can hope will be rescheduled, when public life resumes. The three-person exhibition will be a chance to see Leslie Baum’s reimagining of the world in bold and blobby shapes and colors, alongside Diane Christiansen’s dark, whimsical comedies, and Selina Trepp’s Kandinsky-meets-Rube Goldberg vibe. It’ll be a party in two, three and four dimensions with something for everyone, whatever their favorite hue or pattern. I can’t wait to go. 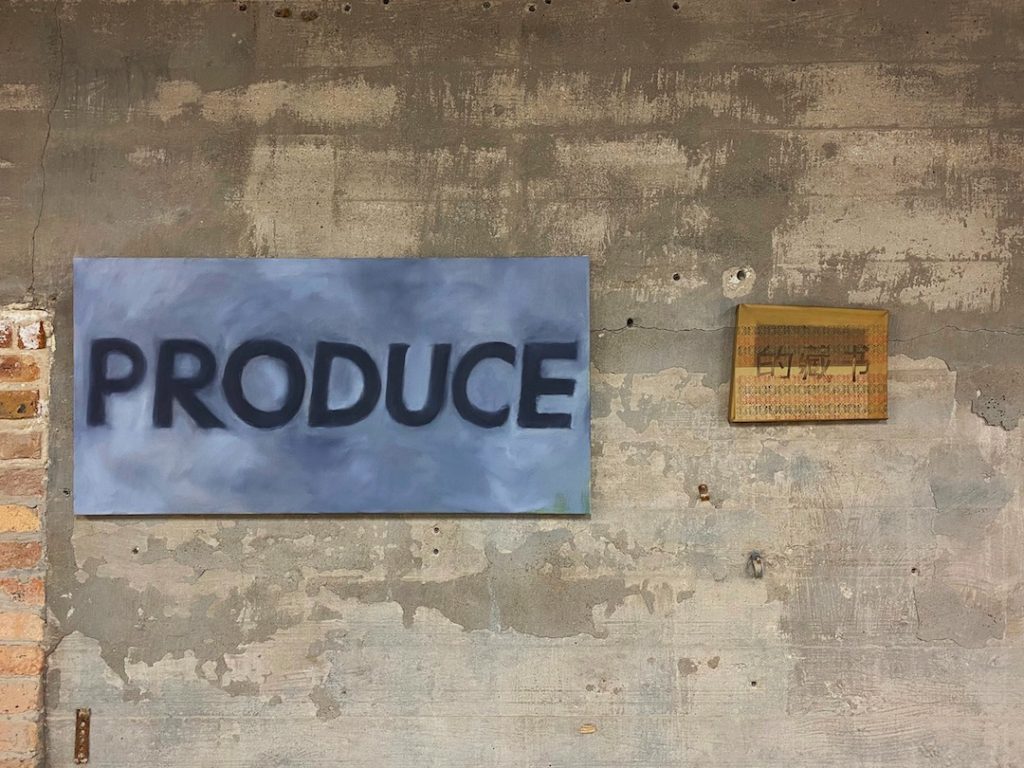 In the era of global jetset-induced placelessness, pandemic-prompted virtuality and general art-market supremacy, is a simulation of an exhibition as good as a real one? Danny Bredar and Leah Ke Yi Zheng, two painters living in Chicago, are testing this possibility—and then some—with “It Will Never Go Back To What It Was,” a sensibly titled two-person show at Currency, a gallery in Münster that does not exist. Much like what brick-and-mortar art spaces are doing right now, Bredar and Zheng photographed their carefully installed and well-lit creations—Bredar paints gritty realist oils and Zheng lays out elegant strokes of color on oddly framed silk—curated an orderly PDF, and sent it out to prospective viewers. Does their virtual show feel like most other virtual shows? It does. Are virtual exhibitions pathetic replacements for in-person presentations? They are. Does it matter that their gallery is a figment? Not really, except in terms of sales and promotion. Is this a logical exercise in gullibility and disappointment? Yes, it is.