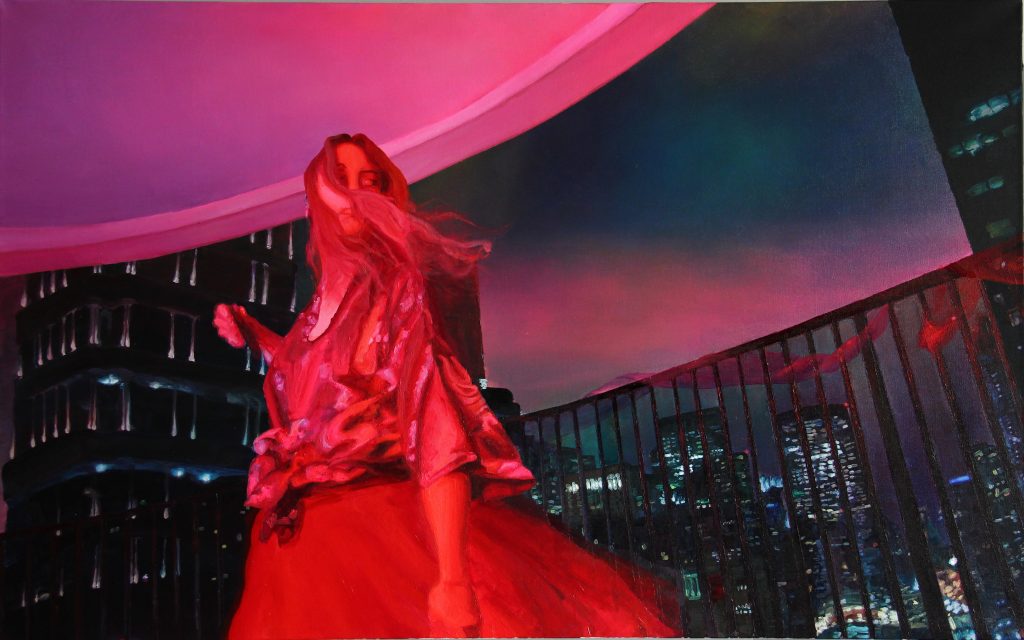 Veronica Clements grew up on mixtapes, plastic Happy Meal toys and the purple cheetah print of Lisa Frank stickers. Now as a twenty-four-year-old artist, these themes of playful, gaudy nostalgia run through her paintings like an electric current. She is serving memories on a hot pink platter.

Clements is a Chicago native and recent graduate from the University of Illinois at Urbana-Champaign. There, she earned her Bachelor of Fine Arts with a focus in painting and art history. Chicago’s influence is very present in her work. In a recent painting titled “Vanitas Film Still #1,” a girl is seen dancing on the balcony of the Marina Towers.

Clements lives in Chicago and works as a visual arts and videography teacher at the Elgin Academy. Her studio functions out of her bedroom.

Her paintings are neon-colored, bursting celebrations of girlhood, a state that glimmers, giggles and shifts. Glass bongs shine delicately, as though made from fine, divine porcelain. A CD player is splattered in rainbow stickers and rhinestones. A horde of girls—loud, sentimental, moody—gather around a bedroom as if at a fire. Sequins flirt. In these portraits, Clements is attempting to “collapse my past into my future.” She is revisiting and relearning her childhood memories. She is painting over them. 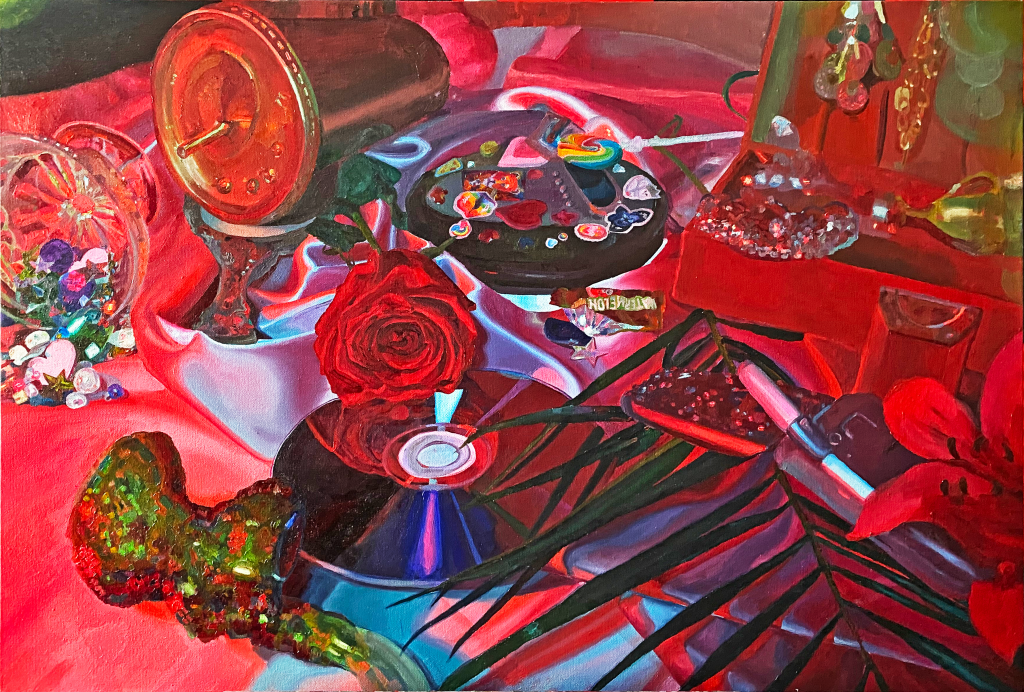 Clements works to “modernize seventeenth century icons” in ways such as replacing realistic butterflies with plastic butterfly clips and a realistic skull with a piggy-bank skull. She is replacing one aspect of girlhood with another while simultaneously reclaiming the power of her own individual girlhood. This idea bleeds through every piece she makes.

What strikes the viewer most is Clements’ confident, bold use of color. Her paintings pulsate and ooze with fluorescent, wet reds, fuzzy blues and candy greens. The objects in her work seem to have always been that way, in that silky purple light. They ooze fragility and persistence like statues. You almost wish you could touch them.

The internet is undoubtedly a source of both inspiration and terror for Clements. While maneuvering the depths of social media as an artist is “a game every young artist has to play,” its commonality doesn’t make the actual practice any easier. The constant eye of both the audience and other artists leads to doubt and comparison.

At the same time, Clements believes that “social media is breaking down barriers in art.” Viewers no longer have to go to a museum to see work, they only have to go to an artist’s Instagram page or website. The distance between artist and audience is waning.

On her Instagram, Clements frequently films time lapses of herself painting and makes posts where she gives explanation into aspects of her process and shows her studio. This intimacy can mean the difference between gaining an audience and lacking one.

Clements’ work was featured in Woman Made Gallery’s recent virtual exhibition “LOSS.” Her featured painting is a pink, glowing, shimmering still life of beautiful clutter. A rose lays gingerly on a reflective CD. A candy wrapper sleeps. A sea of glitter and tinsel pour out of a glass. The synopsis reads, “Vanitas vanitatum omnia vanitas. If everything is vanity, everything is lost.”

When Clements envisions her future, she sees herself working as an independent artist. She would love to see herself more involved in a large artist community. She says there is something fiercely remarkable and powerful about a colony of young artists, especially women and artists of color, who deeply understand “the value we bring to the art world.” Her first step toward this goal has been completed, as Clements recently joined the board of the Young Women’s Caucus, a sub-caucus of the National Women’s Caucus for Art in Chicago, a nonprofit organization dedicated to creating opportunities for female visual artists.

Clements’ work is a glittering, blazing goodbye party. A way of celebrating what has left us. She says, “That’s the beauty of paint. You can keep everything and everyone alive.” (Jasmine Ledesma)

This fantastic artist is actually a graduate of the University of Illinois at Urbana Champaign, and not Chicago, as stated in the article. We are too proud of this alumna, and all our amazing graduates, to let this error slide!