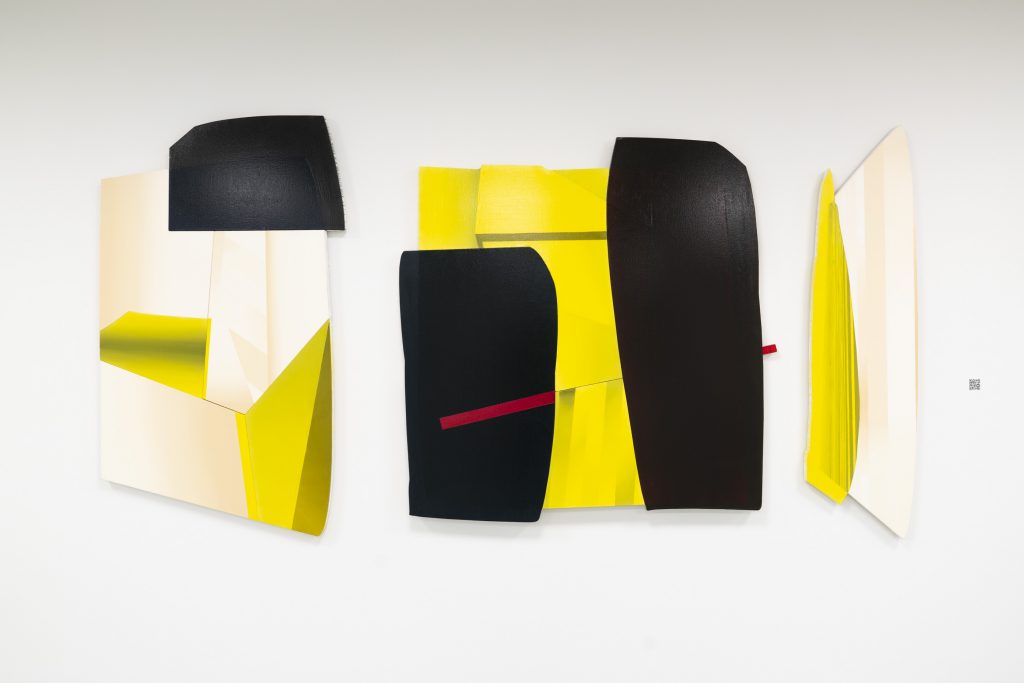 The paintings read like investigations of composition, color and surface. They feel formal, analyzed. The exhibition title, “We Still Play with Blocks,” reveals his process of accumulating parts and finding ways for them to interact, like a child creating a Lego construction. In addition to their cumulative process, Smith is using abstraction to discuss otherness and cultural displacement.

“Redacted” is one of the paintings that anchors the exhibition. Irregularly shaped canvases are joined to create a leaning, monumental environment of neutrals—blacks, gray and a buttery white. The center of this assemblage remains empty, a hole at the very core, where the locus of the painting should be. Paradoxically, this emptiness optically fills with its own weight, a redaction reborn. Black horizontals describe the idea of redacted language more literally, appearing like wedge-shaped Sharpie strokes, excising language and thought from the viewer. I loved how this painting revealed what is hidden from us as an entirely new object.

Another composition that uses negative space to create a painting-within-a-painting is “In the Margins.” White, triangular shapes lift up and over, enveloping a smaller, rectilinear canvas. Ochre lines subdivide the larger shapes while the smaller canvas again reveals black, redacted marks and red and yellow accents draw the eye to the center. At the top edge, a yellow and green triangle visualizes the title. 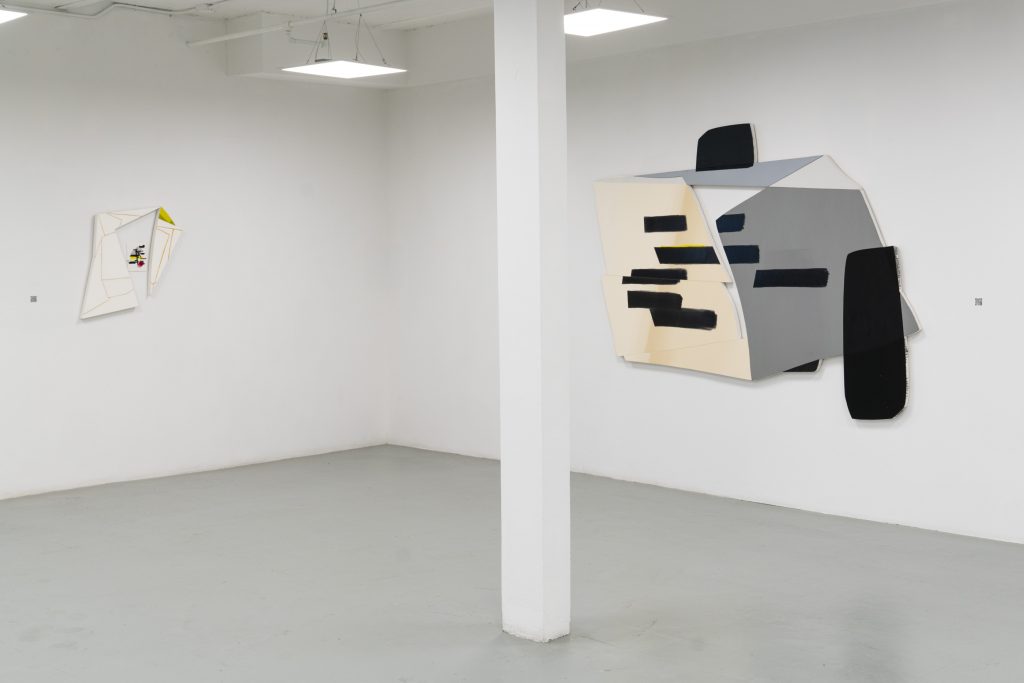 Smith’s titles reveal his goal of using abstraction to expose identity politics. As a Black artist, Smith discusses his use of abstraction as purposeful in that it forces the viewer to feel frustration, mystery, perhaps curiosity. Viewing a nonrepresentational artwork can parallel a sense of being outside, of experiencing otherness. I am excited to see Smith wield the tenets of abstraction and use them to codify a cultural truth. Smith employs line, shape and color as a vehicle for an embodied experience, like Sam Gilliam’s drape paintings or Motherwell’s “Elegies.”

While the conceptual goals of this exhibition are sound, perhaps even profound, I wasn’t always feeling them. I am not sure the paintings always carry the burden that Smith asks them to. Some read more as cool and formal experiments, as the exhibition title suggests. The artist mentions Torkwase Dyson and the late Edward Clark and his shaped canvases among his influences, and that rings true to me. These paintings are situated somewhere between Dyson’s overt confrontation with spatial Blackness and Clark’s more subliminal expressionism. Nonetheless, the paintings are strong, both Smith’s rigor and playfulness are evident in abundance. Smith openly discusses his practice as ever-evolving, and his more contemporary paintings, like “Slavish Devotion” and “The Stranger,” have more muscular, psychological marks that give them a visceral authority. They move the needle further toward Smith’s goal of abstracting his lived experience. (Rafael Francisco Salas)