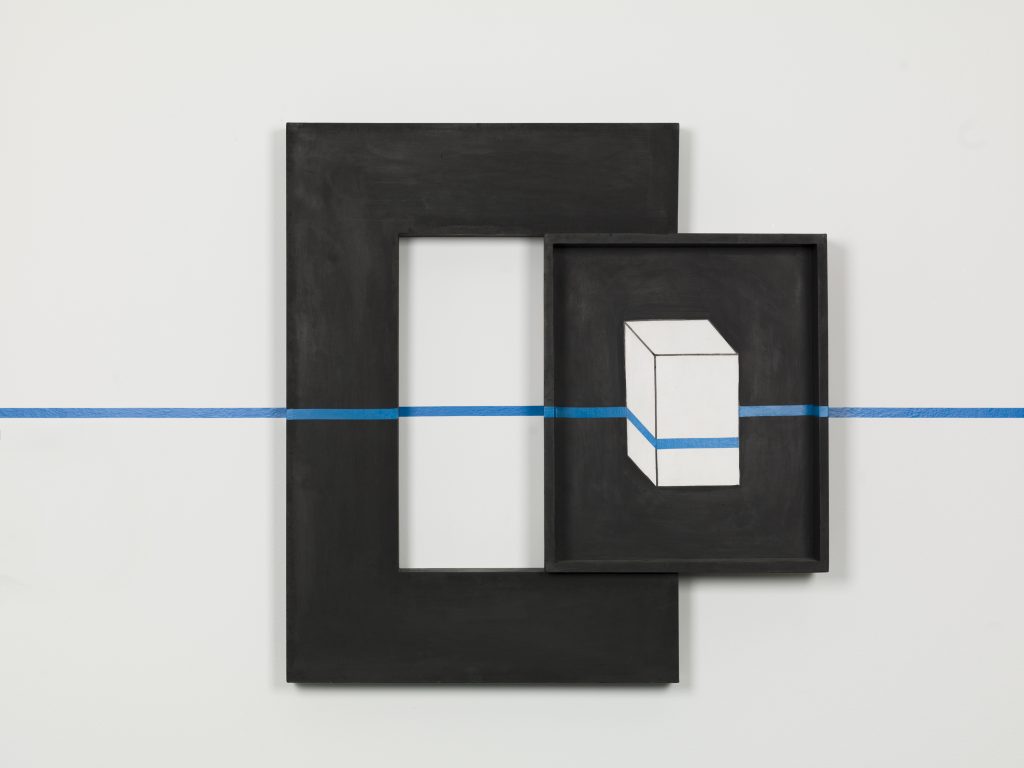 A line is a geometrical form connecting two points. A trace drawn by the tip of a pencil or a printer’s needle on the surface of paper or canvas. A line is a division of text, conditioned to the space of a page; it is a unit of poetry, also called verse. There is a line of thought, a causal line and a line of battle. A line of speech in theater or history. “Here is where I draw the line:” a limit. A line on a map, imagined, and sometimes built on the ground: a border.
The line of blue tape in Edward Krasinski’s “Intervention” (Interwencja) sets the gesture of the exhibition. The strip that escapes from the frames in Krasinski’s work extends a line-like reading through the mostly wall-mounted pieces. The works connect in pairs, transitions on the image of the line, first in the open floorspace, then leading into the gallery on the second floor of the museum.

There is a pleasure in reading that line: a cadence that is comfortable to the eyes, seeing the shifts in the meaning of a form-word from printmaking to video-performance, a median line on a street in Panamá (Francis Alÿs, “Retoque/Painting,” 2008) and a line of bill-payers in a Palestinian town (Emily Jacir, “Where we come from,” 2001-2003, detail: “Mahmoud”). Such smoothness is suspicious: a line is a strong form of argument. As montage did to the moving image, the line’s juxtaposition, isomorphism and temporal order makes the most disparate expressions look like they have always belonged together. But here is the strength of “The Location of Lines”: the show does all but limit a logical, historical or biographical relationship between the works. The next thing you know, you are in an exhibition room with Sol LeWitt and Ana Mendieta, sharing space through poetics rather than contrivance. 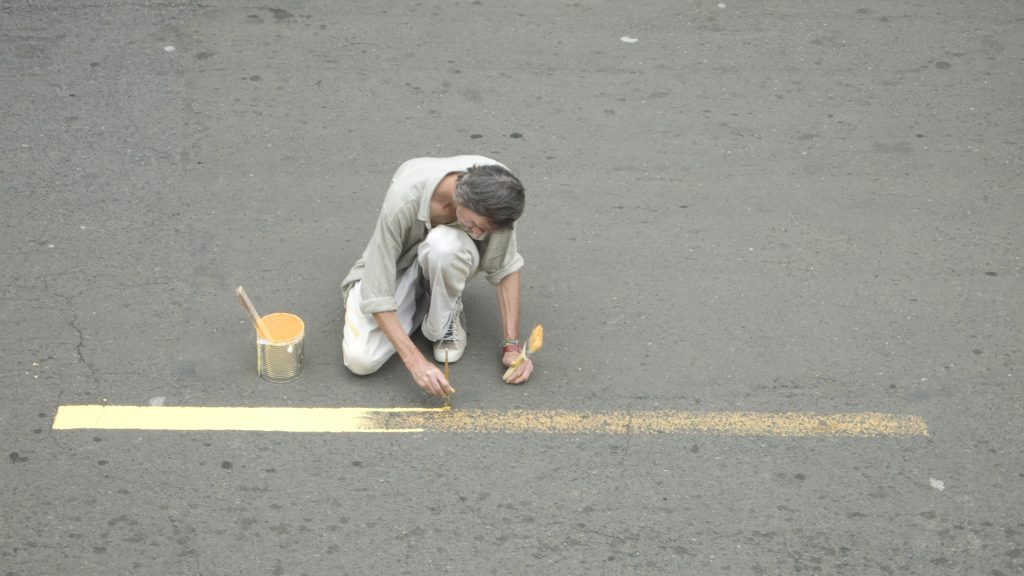 LeWitt’s untitled wall-mounted prints from 1971 are iterations of straight lines on paper; the location of lines, there, a position on a sheet of paper, a command to place a point on the xy-plane. Compared to LeWitt’s honest exercise, Howardena Pindell’s lines are a trick. “The Video Drawings” (1975-1976) show dozens of arrows resembling vectors, drawn over photographs of moving images from the television, and thus superimposing the schematic mechanism of the line on the hypnotizing, dynamic forms on the screen. In their composition, these arrows pretend to describe or to plan the image underneath the acetate, while in fact they do not.

In the 1974 video-performance “Body Tracks,” Mendieta makes two blood-red lines with her hands as she slides down a wall. Mendieta’s works often trace the shape of her body, on dirt or with blood, reconnect the body to nature (as the artist understood it), and protest violence against women. They have been associated with Santería practices present in Mendieta’s Cuban cultural basis. But they are also conceptual and, in a sense, minimal. The “Location of Lines” reveals the line as an expansive concept, showing some of its incarnations among needs for historical, affective and unresolved expressions.

In Latifa Echakhch’s “All Over,” there are no moving bodies, no spoken or written language. But partially woven strings hang from a steel frame, creating the appearance of an unfinished piece, behind which the weaver appears. In these works, you glean the subject and the body responsible for the creative act. You glean a presence.

Presence, in those works, is also situatedness: the work exudes a subject with a space, or a place, or a language of departure. In part, this exhibition, which gathers works from artists from or working in South and Central America, India and the Middle East, illustrates how geographical situatedness and embodiment appear together in contemporary artistic discourses from the global South. 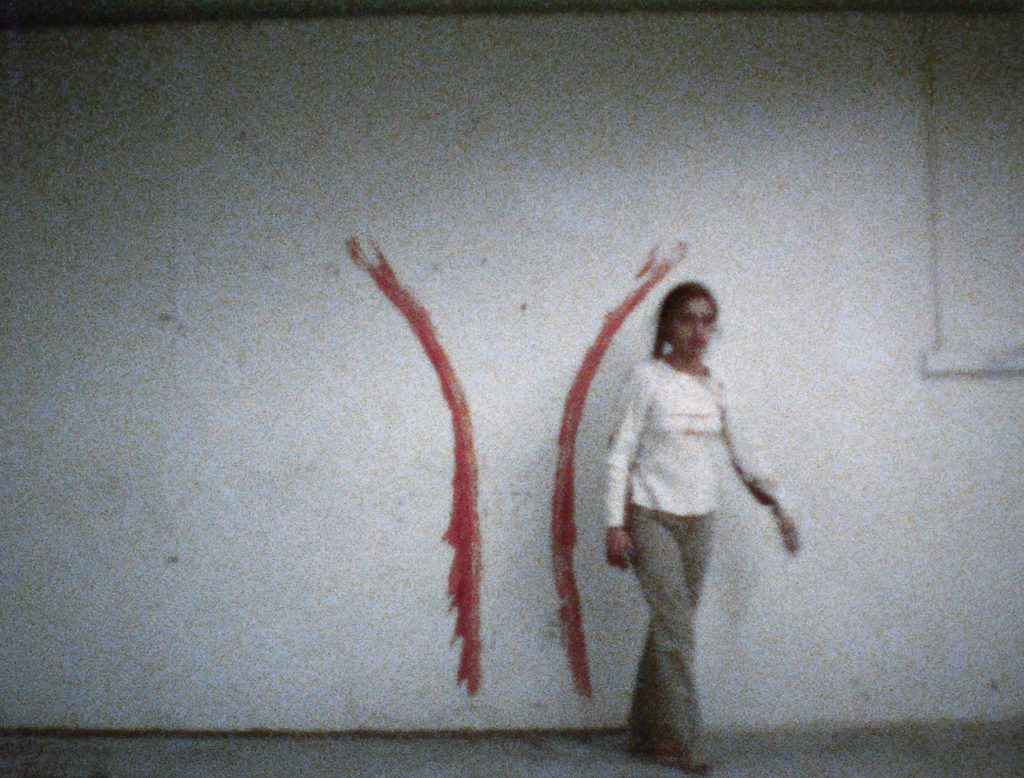 On a second level, the exhibition is a visual essay, wherein each work is an exercise and a rejection of the line’s straightness, a piece of an argument on the line’s relationships to reality. The variations in LeWitt’s artist book themselves quietly undermine the singular, “the location,” presenting mathematics as infinite variation, becoming drawings. “Measures of Distance,” a 1988 video work by Mona Hatoum, shows lines of Arabic writing, taken from letters exchanged between Hatoum and her mother over the image of the artist’s mother bathing. The sound is a voice-over of the letters translated into English. In this context, the video offers the line simultaneously as a measure of distance and a form of contact; a unit in writing and an abstract trace on the real world (the Arabic word “khat” means both line and handwriting, or the art of calligraphy). In “Road Lines,” a series of five prints by Zarina, the lines of roads are etched in as in an aerial map, but scored by the dark residue in the Nepalese handmade paper used by the artist, disturbing the single-mindedness of roads, distributing its destinations by loss. “One who broke away from the caravan and got disillusioned by the faith,” reads the Urdu couplet by Allama Muhammen Iqbal in the last picture of the series.

While going through the museum’s collection, curator Line Ajan was struck by the title of LeWitt’s book “The Location of Lines” (also on view in the gallery). Today, or for her and for me, the locations of lines are sites; to point them out would be to find the places of lines created and traced to divide land, resources and people. The show goes a step further, exploring lines as graphic and political mark-making, as division, but also as connection, holding an ambivalent relation to distance. Within and beyond this museum, it is the diasporic presence and the situatedness of many lines that can sustain this ambiguity. (Marina Resende Santos)

“The Location of Lines,” curated by Line Ajan, Museum of Contemporary Art, Chicago, 220 East Chicago, until February 21, 2021. The museum is temporarily closed due to the pandemic.