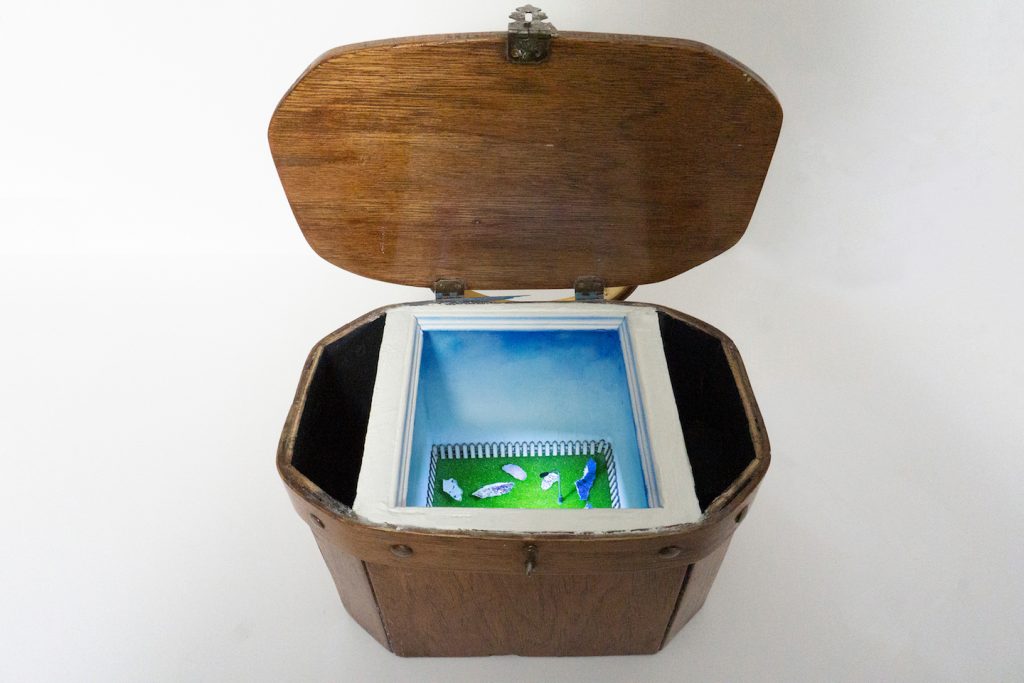 I am a sucker for a good diorama, and Sebastian Bruno-Harris is a very good diorama maker. Typically, he combines this skillset with an acute sense for finding objects of the hardware-store variety, plus a healthy dose of the absurd. In “Model for Conspicuous Encounters,” an exhibition at Chicago’s Clutch Gallery this past September, Bruno-Harris went one further, building a diorama inside a diorama. Clutch, a twenty-five-inch-square gallery housed inside a purse, normally invites a social and intimate viewing experience that includes tracking down the person carrying it; due to the pandemic, the gallery is accessible only on Instagram. Nevertheless, a little bit of magic can still be found by (virtually) peering inside, where Bruno-Harris installed a five-by-five-inch square of Astroturf, lit by a tiny streetlight, surrounded by a white picket fence and blue skies. The lawn was sprinkled not with plants but torn pieces of floral-print paper, the 2-D equivalent of plastic grass. A little bit of suburbia, rendered avant-garde, and small enough to fit inside a handbag—what more could one want? 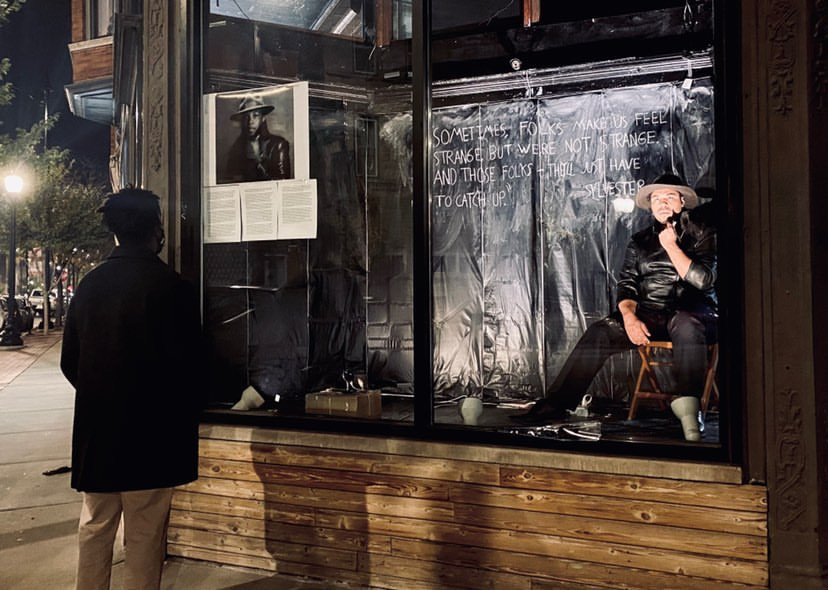 Humans are hardwired for figurative visual language. A real person, enmeshed in a compelling story, gets us every time. That’s important for movie directors to know, but also historians, social justice reformers, basically anyone who cares deeply about imparting information and creating change. “Body/Space,” Anthony Sims’ October-November performance series at Chicago’s Co-Prosperity Sphere, provided plenty such opportunities for passersby on each of the twenty-six evenings that he created tableaux vivants in the gallery’s enormous storefront windows. There Sims posed as poet Langston Hughes, choreographer Alvin Ailey and writer James Baldwin, and other Black queer figures such as gay liberation activist Marsha P. Johnson and vogue queen Willi Ninja. Against blackboard-like backdrops across which he scrawled rousing quotes from his subjects—Baldwin’s “People are trapped in history and history is trapped in them” could be the project’s epigraph—Sims positioned himself in costumes and with props based on iconic photographs, allowing them to come uncannily alive for two hours each night. There is much to be learned from abstract theorizing and statistical analysis, but it is embodiment that most readily equals empathy. 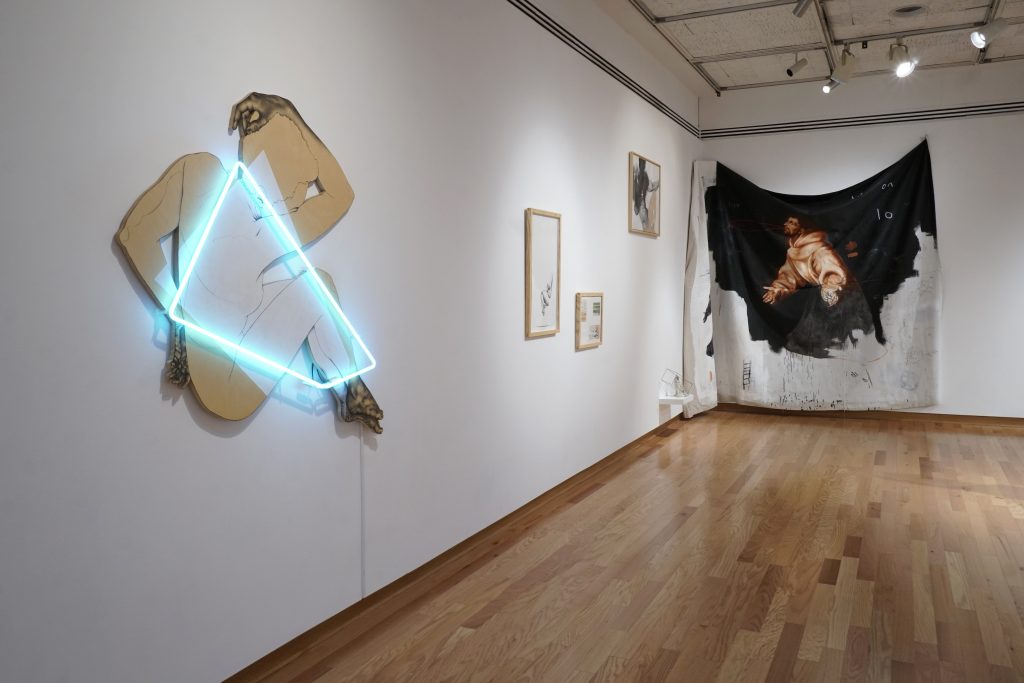 Madness and abuse are as poorly understood as they are represented in modern Western culture, a hole that Megan Sterling and Matt Bodett begin to fill in this collaborative exhibition. On limited view at Rockford State University in Illinois this past fall, “Emptiness is Form,” tenderly installed with dozens of overlapping sculptures, drawings, wall hangings and paintings, tries hard to find visual languages for expressing embodied trauma, hallucination, depression and states of healing. In an enormous hyperrealistically drawn scene composed of cutouts, Sterling places three large flat stones above the body forced to always bear their weight, a body nearly obliterated by the assault they symbolize, a body whose grasping arms are its only visible part. The irreconcilability of styles in Bodett’s sampling of Leonardo’s “Last Supper” and other Renaissance religious painting and sculpture—think sacred naturalism versus profane graffiti—signals the gulf in how individuals possessed by powerful visions were treated in two radically different times. Museums and churches hold the glorious evidence of then; as for now, look down a dark alley to find Jesus and Saint Francis and their disciples, or else check the line at the pharmacy counter.

Dimitri Pavlotsky, installation view of “Venturing Out,” a virtual exhibition on view at dimitripavlotsky.com.

With unknown abstract art, it can be fun and occasionally enlightening to play the game of looks-like-what. The paintings of Dimitri Pavlotsky remind me of 1980s Frank Stella, if Stella had been using only acrylic on a standard canvas; de Kooning, up close and at his angriest; and a bit of Brice Marden, at least for those lovely loops. Most revealingly, perhaps, are the moments where the great British painter Howard Hodgkins comes to the fore, because Hodgkins was a memoirist who daubed all the way to the tips of his frames, and Pavlotsky’s got something similar going on. In “Venturing Out,” a virtual solo exhibition hosted on his website, Pavlotsky displays canvases from 2019 and 2020, and the differences record an aesthetic response to the pandemic that is fascinating to observe. Everything is dazzlingly colorful and dizzyingly busy, but the works from before respect their edges, contain themselves, arrange their brushwork into lyrical passages; those done in lockdown and afterward are painfully cacophonic, jarringly all-over, looking as much like fragments as they do the picture of chaos that is the United States right now.