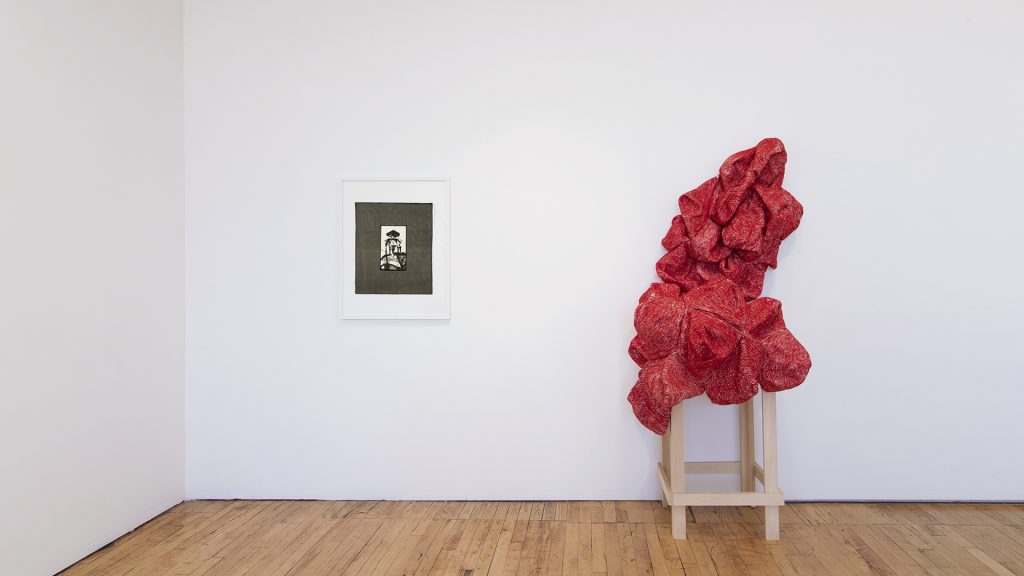 Growing up in a Punjabi household, my grandparents would tell me stories of their childhoods in the northern frontier of pre-Partition India. They’d speak of afternoons spent watching their fathers work in the village while their mothers would sit on wood-rope “khattiyas” (outdoor daybeds) embroidering flower work or “phulkari” veils commonly known as “dupattas.” Dupattas are worn to conceal the detail and curves of a woman’s body. They are a symbol of the decency and dignity of an Indian woman as much as they are a demonstration of the gendered cultural and material landscape that produces patriarchal narratives on what is categorically female work and behavior in India. 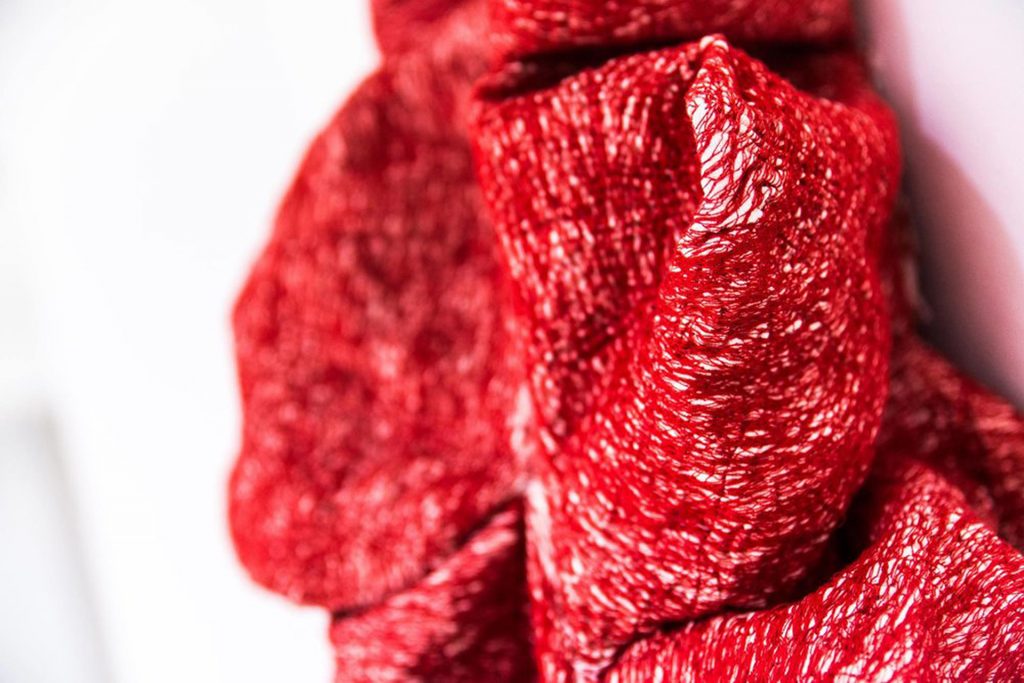 Visiting “EXO,” it’s hard not to associate the national, cultural and aesthetic implications of textile and fiber works by Elnaz Javani and Annette Hur, who are of Iranian and South Korean descent, respectively. Javani’s fabric and thread sculpture, “Cell” (2018), allegorizes the constant state of transformation mediated by the female body. The artist interprets the continual violence and oppression the body is subject to through repetitive threadwork executed by a handheld sewing machine that stiffens the otherwise soft material. The flesh of the body grows outside its ascribed form, as if infused with the energy of female consciousness gone rogue.

Hur’s “moth works” and Korean silk and ink-on-paper compositions confront their material association of being “soft” and “feminine,” all the while critiquing both the craft history and contemporary value of Korean silk, specifically in its significance in matrimonial ceremony. Skillfully juxtaposing patterns cut for the body with thread that joins forms to the surface, Hur includes her own Korean ceremonial silk garments in these assemblages. Clothing that was once surrogate to the skin of a new bride now tells a story of the struggle of splitting roles between home and migrant lands in search of companionship. Claiming space for her own experiences through sculptural composition, Hur’s works speak to the fragmentation of the idea of the role of the female body between the East and the West. Delicately folded starched red silks create moth-like forms that camouflage in order to protect themselves from the harsh realities of racist, misogynist and xenophobic curses. 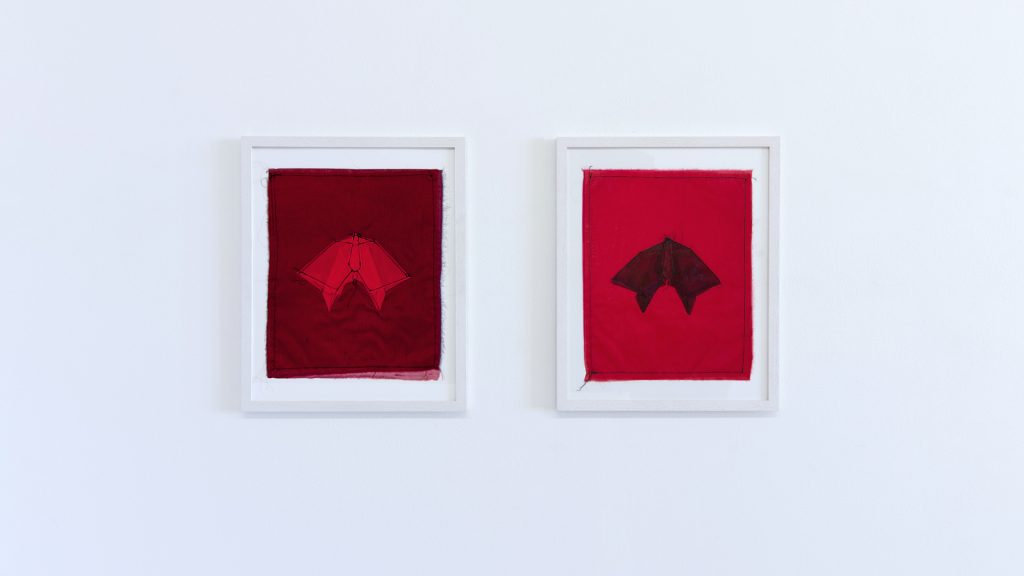 Azadeh Gholizadeh’s curatorial mastery is felt in the relational and contingent pairing of works throughout the exhibition. As an Iranian immigrant herself, the embodied experience of simultaneous placelessness and constant movement led the artist-curator to extend her to thinking about the drawing of a line as an act that moves forward; starting, stopping and restarting in continuity. The lines Gholizadeh draws in her own practice travel through Javani and Hur’s, creating a textile interplay of the immigrant experience.

The exhibition culminates in Javani’s site specific installation “My Effigies,” (2020), and Hur’s “Moth bedsheet 00,” (2020), both radical and subversive in their expression. The sculptural forms Javani conjures resemble bodies in transit, in constant transformation, formed and deformed over matchstick borders that point to the instability of nationalism particularly at this politically precarious moment. Hur’s bedsheet works offer a space of reflection in relation, where both the needle and the thread come into focus as they stitch together the epidermis of the communal whole. In smoke-like patterns and effigies, Hur and Javani’s works journey together in remembering and retelling their bodily presence within an imperfect world. 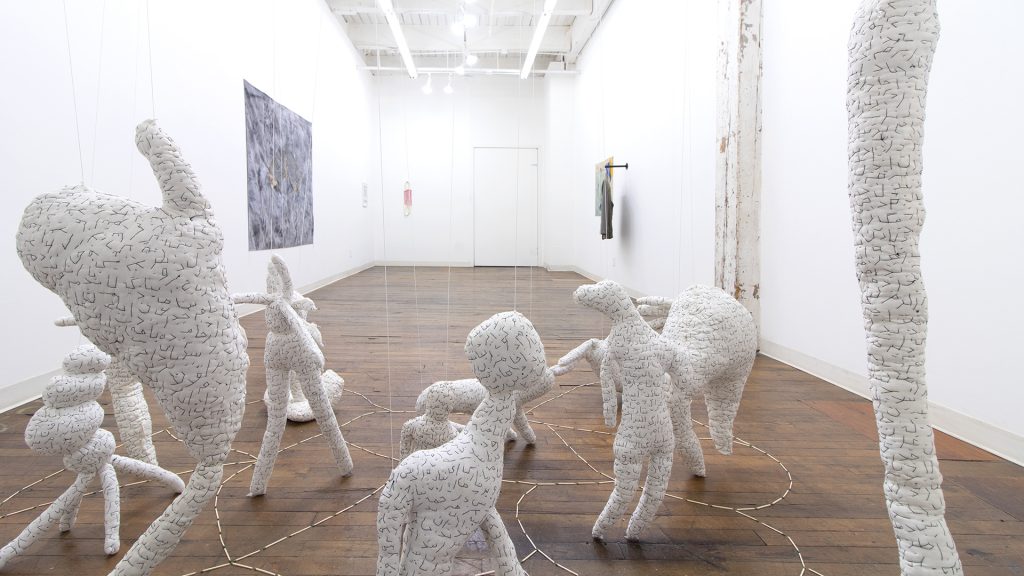 The presence of thread and the stitch throughout “EXO” builds upon themes of internalized trauma within the female body. Each stitch moves through space intentionally, lingering, connecting and drawing in the invited visitor, leaving traces as viewers wind between works marking their own paths. Spending time with a multitude of trajectories in “EXO” invokes the voice of craftswomen before us, of immigrant journeys and the internal dialogue between cultural assimilation and the fecundity of self-awareness that cause us to shift, constantly, at times uncomfortably, rebelliously within our own skins. (Pia Singh)