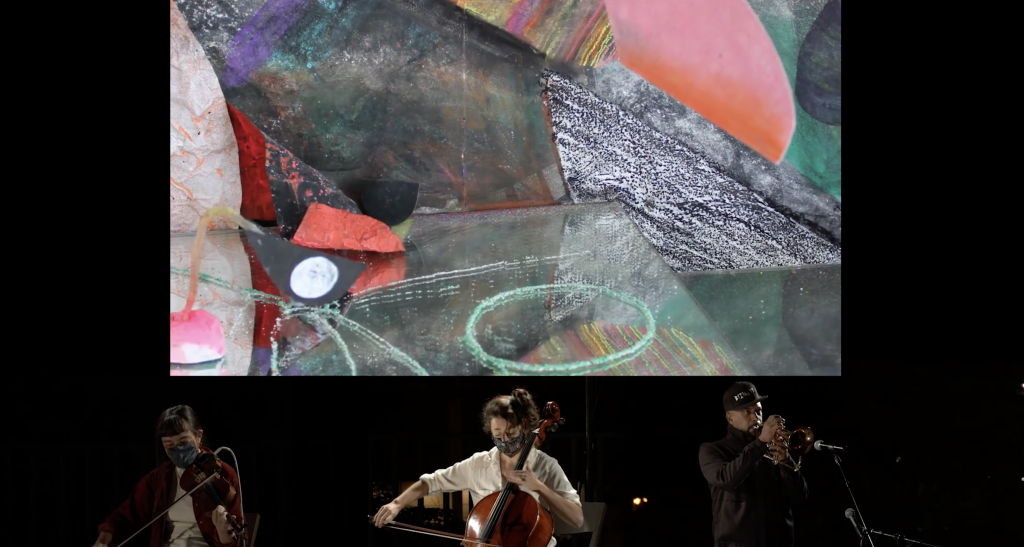 After the early months of the pandemic when it hurt to imagine work produced with passion and pain hanging unseen on gallery walls or sitting in crates in eerily abandoned galleries, it was refreshing when the MCA was able to reopen and launch “The Long Dream.” Even more invigorating was the fact that the exhibition was made up of works by a large swath of Chicago based-artists, many of color, differently abled and/or LGBTQ+, whose contributions were intended to reflect the changes and injustices the pandemic and the murder of George Floyd revealed. The show opened in November, just as the Midwest’s COVID case numbers skyrocketed, and shut down soon after. New performative and video works set to be released near the original end date of the show were relegated to the virtual world and premiered on January 16 as part of the museum’s program “The Dreamscape.” 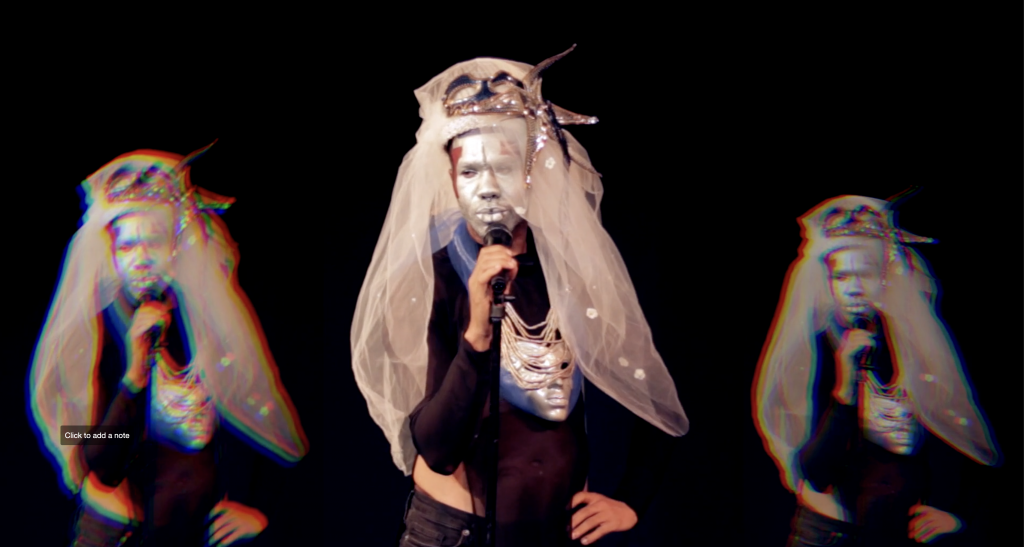 The virtual event was vast and carried with it the sense of dream as audience members could be immediately transported to one of several dynamic spaces. A video gallery featured work by artists like Darling “Shear” Squire dancing across different landscapes and nighttime Chicago, where her grace and concentrated moves make a stunning silhouette against the city lights. Also included in the gallery were new works by Derrick Woods-Morrow, Joanna Furnans and Derek McPhatter, whose video demo stars Alexa Grae as Dayton MacNamara Black holding court with a microphone and decked out in body paint and a veil, sometimes mouthing the words, sometimes simply standing, holding attention, to the sound and lyrics of the track “Dare to Dream.”

While guests were invited to explore the video gallery on their own, Zoom breakout rooms played host to DJ sets by Sadie Woods and Ayana Contreras who gave personal and historical insight into each track played. There were talk-back “roulette” sessions, where “Long Dream” artists like Andres L. Hernandez shared plans for creating scores for self-care, Andy Slater talked about the importance of inclusion for artists of differently abled bodies, and Santiago X advocated for the creation of a new, more accurate and inclusive collective memory.

Most engaging were three streamed premieres that took place during the event. In the first, Lise Haller Baggesen’s “refuseniks at the museum,” two dancers performed three distinct pieces collaged together into one video. Each of the three pieces had a significant vibe and signaled a solemn beginning, a chaotic middle and an exuberant end. In each of the performances the dancers wore Baggesen’s Refuseniks, flowing robes made of colorful and pattern-heavy fabrics meant to act as a safe haven from the loaded politics of a situation. The performers manipulated them as they moved. They wrapped and draped them over their faces, and in the second piece, bound together in one garment made for two, moved against each other and their connected middle seam. There was a feeling of tension and almost violence between the two dancers in this section—they spun each other around, dragged each other, put each other into vulnerable positions—prone on the floor, or hands up in the air. That tension remained even through what could be read as more tender gestures—is one performer holding the other a signal of care or a false, manipulating act of deceit and power? The dance that dominated the end is one of more freedom, the performers moving separately again with wide gestural motions. The moments of interaction between the two dancers were more collaborative here, supportive, caring. They ended by holding each other on the floor.

The performance was staged between the museum’s two second-floor galleries and the Commons, a space conceived of for bustling activity as a background. And even though the space was empty of guests, it was comforting to see that work was still being made. Along with the dancers, several videographers, including one who seemed almost a part of the dance, in pursuit of the performers with a handheld camera, were visible, as was the group glow in the dark flowers, who provided a soundtrack of driving distorted guitars and ethereal female voices. All wore Baggesen’s Refuseniks. 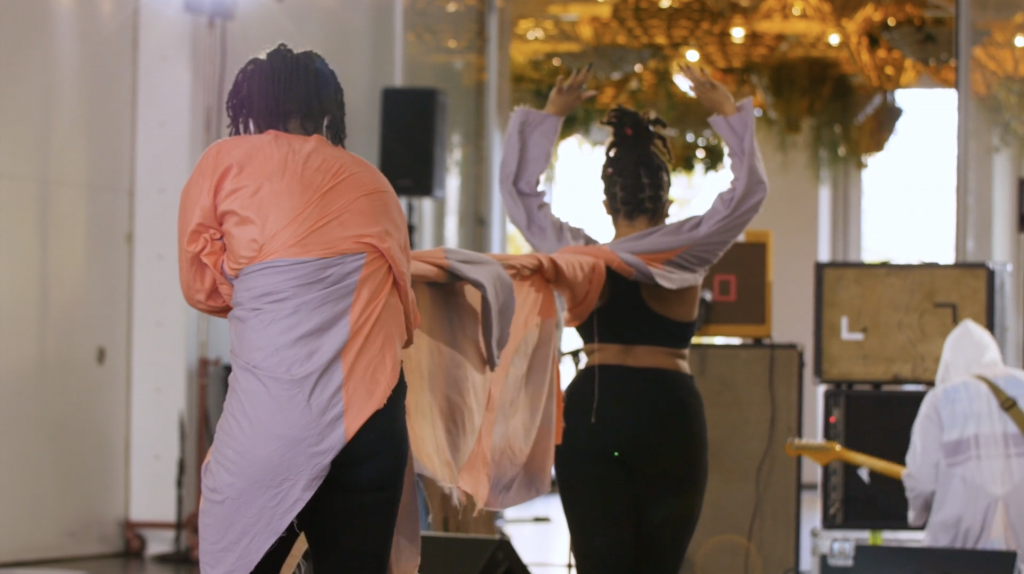 The premier of Selina Trepp’s “I Work With What I Have” also indicated the ongoing life of art, in museums, in studios, on stages. Trepp’s piece was a mesmerizing thirty-minute flow of shapes cut from various materials, layers of paint and mirrored boxes moving together and apart in surrealistic happenstance. The changing compositions and patterns were accompanied by a string-and-wind-instrument ensemble. As part of the roulette talk that followed the premiere, Trepp shared her desire to explore the relationship between sound and the visual, improv and composition, how one fuels the other, and how each gives the work life.

In addition to these two performative premiers was the work “Como lo celeste sitiado (Like the heavens besieged)” by Eduardo F. Rosario, a haunting two-channel video featuring images of broken concrete with exposed rebar, rock nearly submerged in water, a tropical landscape under a sky about to storm, and a cell phone scrolling through microfilm articles about arrests and uprisings. The accompanying soundtrack with noises of what sounded like buildings crashing down, techno beats and horn tracks that would belong in a detective murder mystery. All these elements created an uneasy and abstract narrative of traumatic events hollering to be exposed. 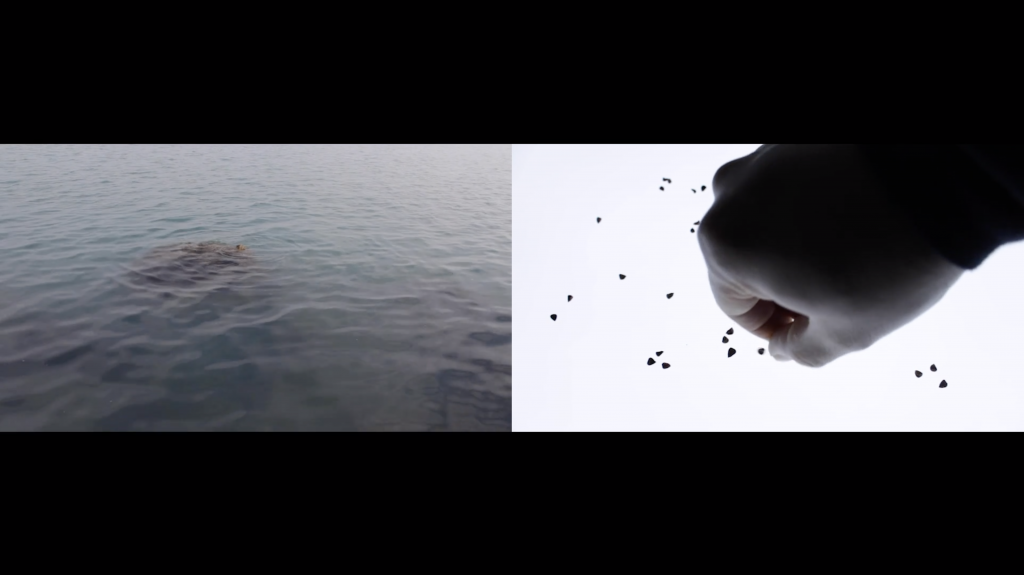 Eduardo F. Rosario, “Como lo celeste sitiado (Like the heavens besieged),” 2020
Digital video (color, sound), 40 minutes, 6 seconds/Courtesy of the artist. This performance was produced in collaboration with the Chicago Composers Orchestra and was partially recorded at the Museum of Contemporary Art Chicago. Full video: vimeo.com/showcase/7682080/video/498694574

So much happened over these four hours, and it was impossible to experience it all, or explain everything here with complete accuracy. As I tried to get everything down, I felt what I imagine a mind does in the middle of a dream as it tries to make sense of all the elements thrown its way.

Despite the sometimes overwhelming quality of the event, it was moving to be in multiple rooms that celebrated the work of so many Chicago artists. It was impressive too how the museum made so much accessible in the virtual realm. And yet, as laudable as this endeavor may be, there’s a storm cloud hanging over the MCA now. As I was writing this piece, late as always, the museum announced a round of layoffs. Add that news to the still unanswered letter from frontline workers concerned about questionable safety conditions to be put in place upon the museum’s reopening, and a visitor can’t help but feel misled. The announcement is a contradiction to the spirit of “The Dreamscape,” where the honoring of unheard voices was at the fore. It’s impossible to feel entirely heartened by the event given the knowledge that another equally important group of arts laborers is now without work, and having been handed NDAs, have no voices with which to be heard.

At the end of each “Dreamscape” roulette session, the conversation moderators asked the audience what they would take away from the discussion. For the event overall that I came out with a refreshed desire for art events to continue  to stay, at least in part, in a virtual realm, where opportunities for engagement are boundless, and work and dialogues are more accessible. It is imperative that the force of these brilliant Chicago artists stay at the front of all our minds, and that large institutions in the city like the MCA continue to make space for their work. But only advocating for these voices and their calls for justice, equity and accessibility on a forward-facing platform of exhibitions and programming is not enough for the MCA to fulfill their mission. In order to succeed, to remain relevant, it’s imperative that they advocate on behalf of the voices of all. (Holly Warren)

Videos and performances are available to view through May 2 at vimeo.com/showcase/7682080.