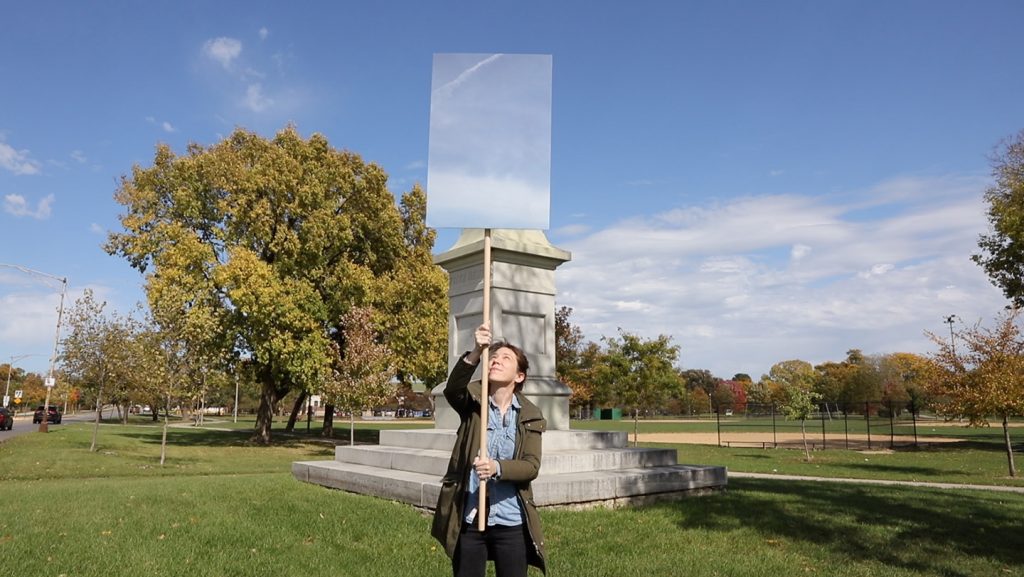 What to do with all those monuments littering city parks and plazas in the form of dead white men, some of them still great, most of them now understood as beholden to racist and sexist ideologies? With a nod to the old-school darkroom technique called dodging, Kelly Kristin Jones holds placards in front of some of the more egregious of these sculptures in order to temporarily erase them in videos and photographs shot from just the right angle. For “in time and paradise,” a fall solo show at the Riverside Arts Center organized to coincide with the one-hundredth anniversary of the Nineteenth Amendment, she built nineteen such tools out of variably sized pictures of the sky, one for each of nineteen women who fought and organized for the rights of all women, not just the wealthy white ladies who were the primary beneficiaries of the ratification. Among those nineteen women were organizers, publishers and journalists, photographers and marchers. In the spirit of the latter, Jones occasionally took those individual cloud sticks out for a walk, to protest Chicago’s many troubling statues and take their rightful (if brief) place atop those grand stone pedestals. 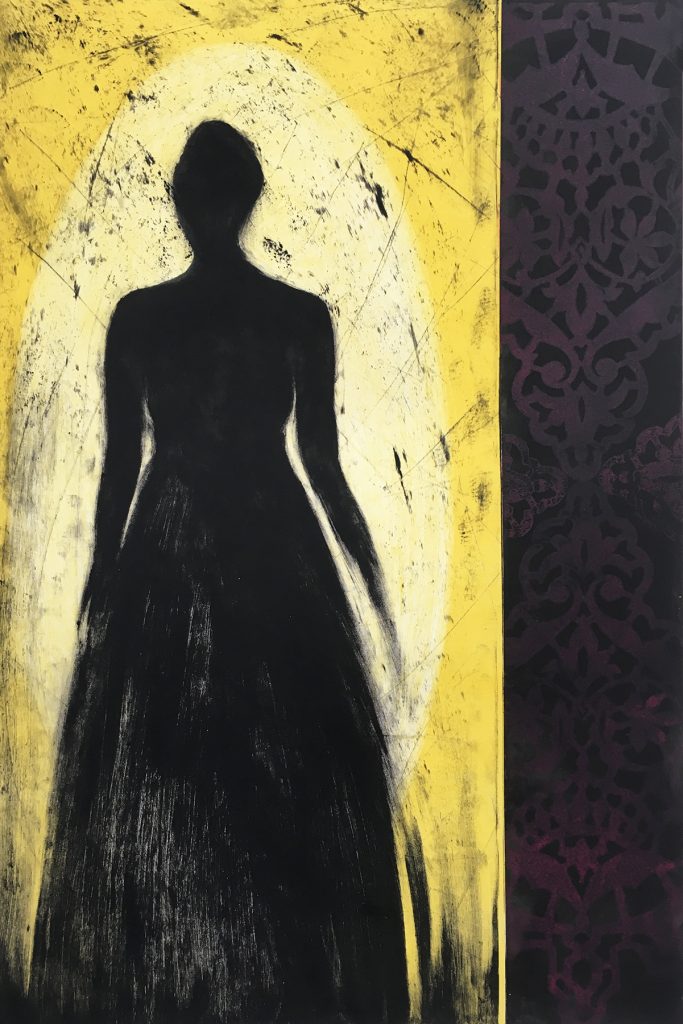 Figurative and abstract are meant to be antonyms, but they aren’t always. In “Return to the Figure,” a solo show at Casa Haas in Mazatlán, Mexico, closed shortly after it opened in March 2020 due to the pandemic, Glen Rogers exhibited monoprints and oils from four recent series centered on timeless female forms. Shadowy silhouettes ornamented with wings, auras and patterning, they glow with the colors and textures of other times and places. Some are named for the Black Madonna and Lilith, those underappreciated and misunderstood women of Christian legend, some belong to the series “Her Story,” and thus stand for all women. Real individuals are not in question anywhere here. What’s at stake, rather, is an abstract notion of Woman, not actually so different from the traditionally female symbols and motifs that were the focus of the self-described abstractions Rogers had spent the past two decades making. Be it a woman, a flower or a yoni, it’s all conceptionally female. 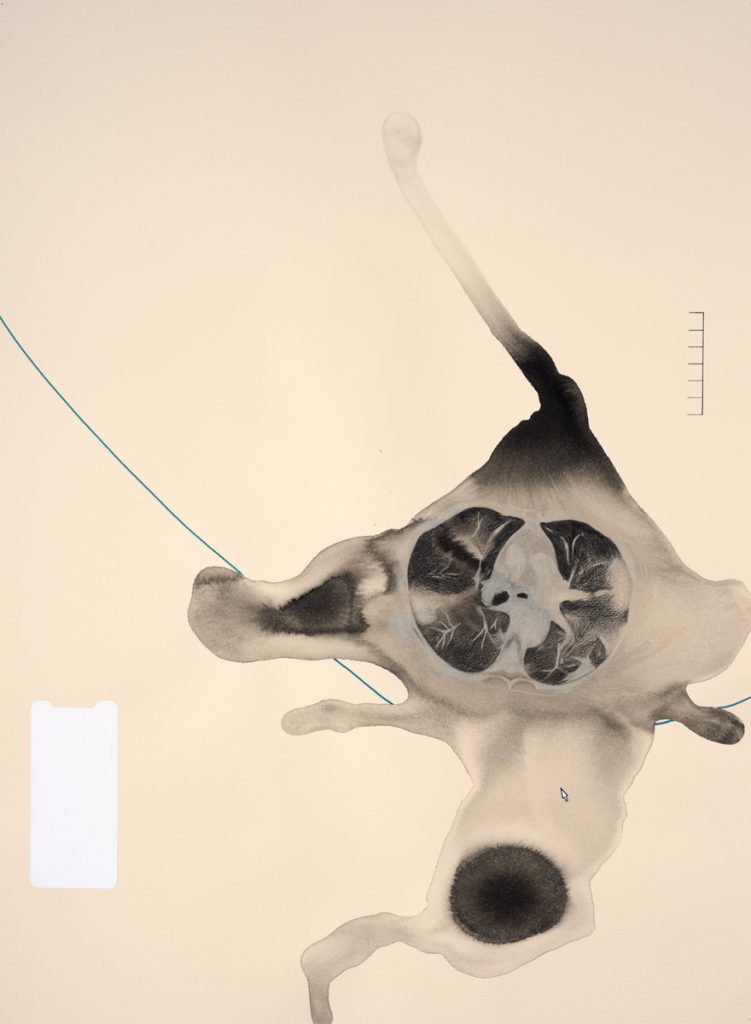 Medical imaging remains unsettlingly mysterious for most laypeople, a visual language of great, sometimes fatal, import that is all but undecipherable. It forms the basis of Vesna Jovanovic’s “Stay-at-Home Order,” a series of seventy-four large drawings, made one a day during Chicago’s spring coronavirus lockdown. Jovanovic’s primary source is a social media app used by medical professionals that, throughout the pandemic, has been filled with images of troubled lungs and related doctor messaging. Rendered six times larger than the size of a smartphone display, in Jovanovic’s drippy inks and smudgy pencils intercut by the occasional brightly colored line of acrylic pen or white rectangle of gouache, the imagery becomes, if not exactly readable, at least recognizably filled with the accidental and the precise, the bodily and the alien, the tactile and the digital. Nowhere is this more visible than in those places where dark spots on lungs blur at their edges, morphing from terrifying signs of infection to human irises that stare directly out from the paper, imploring the radiologist, the schoolteacher, the politician, the receptionist to remember: amid all the bones and viscera, there’s a person in here, too.

The default color of paper is white, and when making a sketch with pen or ink that white ground is a given. The situation is different for metalpoint artists, who must first prepare the surface on which to create their composition. That might not seem like a big deal, but consider the oeuvre of D. Lammie-Hanson, a contemporary master of the Medieval technique who specializes in pictures of Black bodies rendered with a splendor and precision that recall the work of Charles White. It matters immensely that Lammie-Hanson’s finely detailed portrait of Erykah Badu in one of her trademark giant hats is drawn onto a canvas pre-coated with matte black acrylic: that black becomes the base color out of which the singer emerges. Likewise, in an enormous six-panel study of a dancer gracefully falling through the air, the default color is the dark indigo paint that was laid down first. In these works, there is no white, only deep blacks and blues, plus trace elements of brass, silver and gold. The results are rich and glorious.