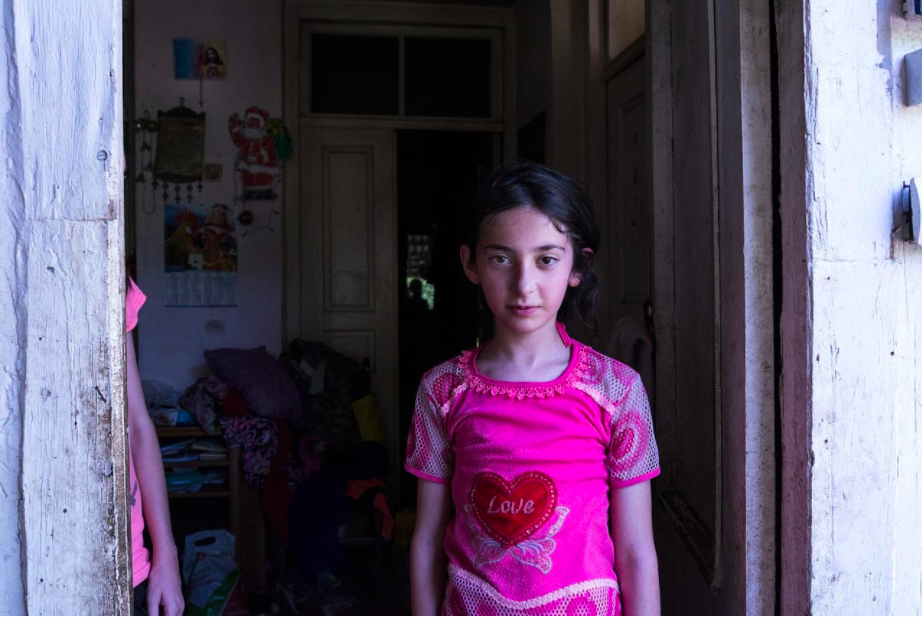 In a world overrun with obscure political conflicts that wreak unjust havoc on the lives of civilians, Kristin Anahit Cass bears witness in two series of photographs on view online at the Stamelos Gallery Center of the University of Michigan-Dearborn. An American lawyer whose family fled the Armenian Genocide of 1915, Cass has since 2015 traveled through the villages of Tavush, an Armenian province along the Azerbaijani border, documenting lives eked out under quotidian threat of sniper fire: children who study in a kindergarten where the window in the music room was shot out; homes with bullet holes in bathrooms, dining rooms, nurseries; abandoned factories where Armenians and Azeris used to work together. The portraits, of both people and places, are composed with a tender straightforwardness that befits each particular subject. Instead of the aestheticized ruins of disaster porn, moments of human resilience shine through alongside the trauma: the pride of a teenage girl sharpshooter, the bright colors and patterns of domestic textiles, a hospitable table full of homegrown fruits and handmade pastries. It’s a tenuous life rendered tragically more vulnerable this past September, with the Second Nagorno-Karabakh War and its continuing aftermath. 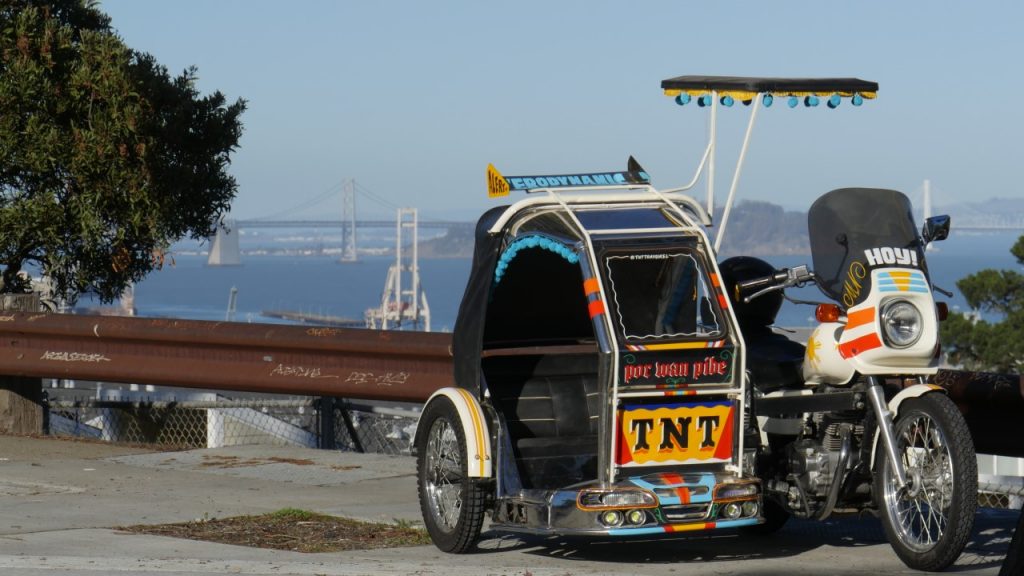 Whether or not capitalism is intrinsically unjust, its outcomes too often are. Alternative models of exchange warrant increased attention, including the sort that would have been provided by “A Place Beyond,” a summer exhibition at San Francisco’s Yerba Buena Center for the Arts that was unfortunately cancelled due to the pandemic. Curated by MUZ Collective, the group show planned to feature Natani Notah’s attempts to stop the never-ending exploitation of Sacagawea by relying on audience donation to remove coins bearing her likeness from circulation; the Bureau of Linguistical Reality’s workshop dedicated to developing much-needed new words for a post-capital economy; and Victor Yañez-Lazcano’s ennobling, attractive assemblages of the tools of undervalued labor, including discarded broom handles and shovels. Projects envisioned beyond the walls of the museum included Paolo Asuncion and Michael Arcega’s “TNT Traysikel,” a flashy motorcycle-with-sidecar reminiscent of the auto rickshaws of the Philippines. The price for a trip around town? Stories of immigration from willing riders, no doubt propelled by the irresistible combination of nostalgia plus a free ride. 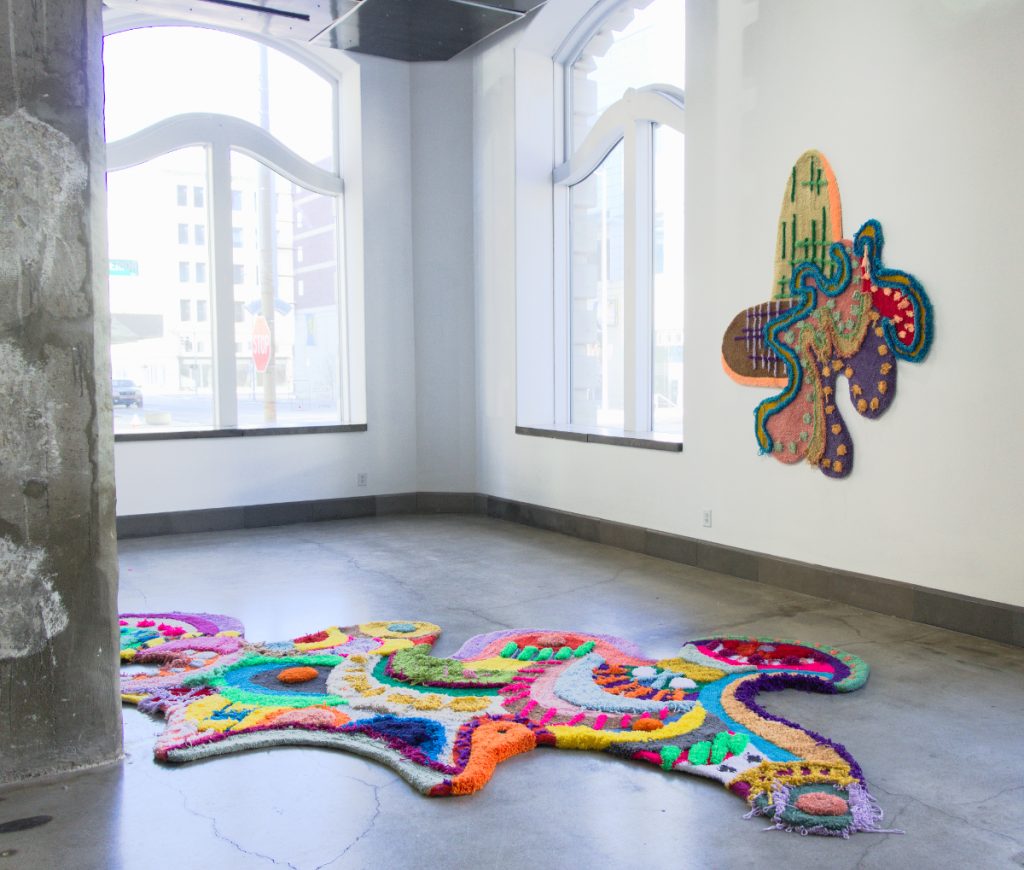 I have vague memories of a fuzzy little rug in coordinating colors that hung on the wall in my brothers’ childhood bedroom. Turns out it was a tufted textile, made with an ancient weaving technique that in the right hands morphs into something simultaneously playful, challenging and nostalgic. Based on “Scheme,” a winter solo show on limited view at River House Arts in Toledo, Loraine Lynn is one of those artists. Made during quarantine and intended for viewers to sit on or touch, the works in “Scheme,” sized doodle to mural, look like they were scribbled with every color of marker following no set plan or else a wildly unpredictable one. Purple and white polka dots interrupt green and pink diagonal stripes; squarish loops in every shade of green overlap with zebra bars; blobs are intercut by a snaking line in shades of blue; thick gray arrows outlined in neon overlap dizzyingly. There are no squares and few straight lines, zero empty spaces, not a single simple silhouette. Elizabeth Murray, the late great painter of cartoonishly bold and madcap-shaped canvases, would no doubt want to curl up on one. 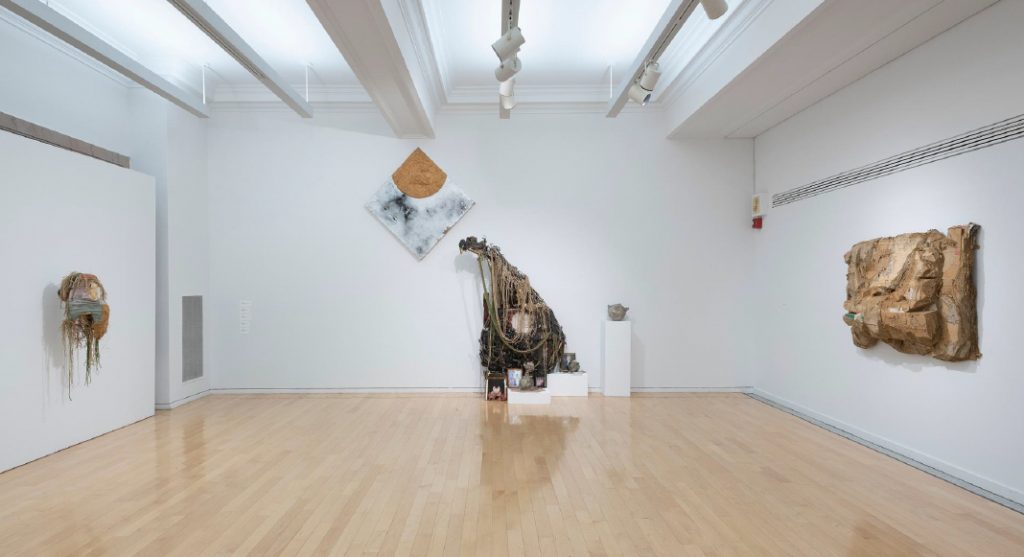 A medium better suited than assemblage to the representation of colonial violence, spiritual erasure and cultural survival would be hard to find. This is especially true when cardboard, knickknacks, concrete, drywall, beads, tassels and sawdust find themselves in the hands of Luis A. Sahagun, whose extensive solo exhibition, “Both Eagle and Serpent,” was cut short due to the pandemic. Altars large and small, mysterious ritual objects and formidable statues of conquistadors and the Virgin of Guadalupe filled the ground floor of the Chicago Cultural Center, many bearing layers of material as tangled, lacerated and embellished as the history of the Spanish conquest of the Americas. Stoic amid the cacophonic, colorful constructions is a series of reliefs made of gouged and carved blocks of densely layered cardboard. Minimally decorated with monochromatic stains or a glob of beads, they feel archeological, far older in reference than 1492 and its aftermath, harkening instead back to the millennia of complex indigenous cultures buried by European imperialism, that can be unearthed only in fragments.