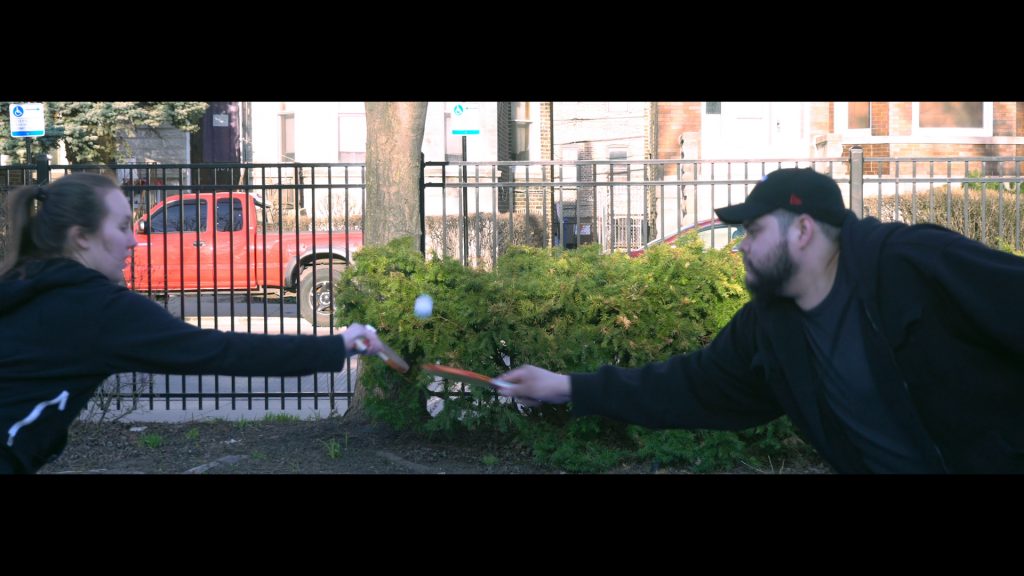 Cherrie Yu’s work straddles the line between performance and video, often going through iterations of both before arriving at a final product. “It’s about the action performed in a present state, but also its afterlife being captured,” she says. “The work lives somewhere in between those two states.”

Take for instance, “Lydia and Matthew,” a twenty-minute video she made in 2019. In it, two performers are shown in split-screen, performing a dance in separate locations. Lydia Feuerhelm is a trained dancer, Matthew Lemus is a janitor at a residential building in downtown Chicago. At points the dancers converge, making the same movements, hopping to the right or bouncing backwards, but at others their movements are in conversation with each other. (“Lydia and Matthew” will be on view at Roman Susan, from May 27 through June 2.) Later in 2019, Yu was invited to perform the work at the Museum of Contemporary Photography. By then, Feuerhelm had moved away, so Yu stepped in and performed with Lemus. It’s not a scene-by-scene reenactment. Instead, the pair take turns discussing how the work came to be, perform excerpts, and add material in response to Trisha Brown’s “Solos Olos” (1976) and Anne Teresa de Keersmaeker’s “Come Out” (1982). 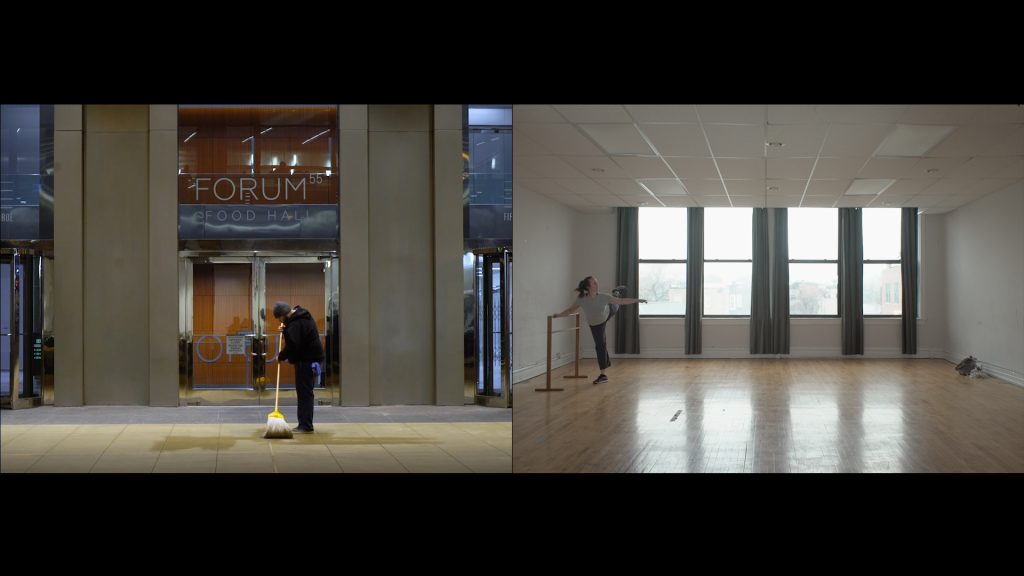 Yu’s work reminded me of Mierle Laderman Ukeles, the artist who coined the term “maintenance art” after becoming a mother and declaring her care activities art. In one early work, Ukeles washed the steps of the Wadsworth Atheneum, making a performance out of the necessary work needed to maintain the institution. It was not unlike the way Yu stumbled upon Lemus performing his acts of maintenance at work, and seeing the potential to transform those movements into art. 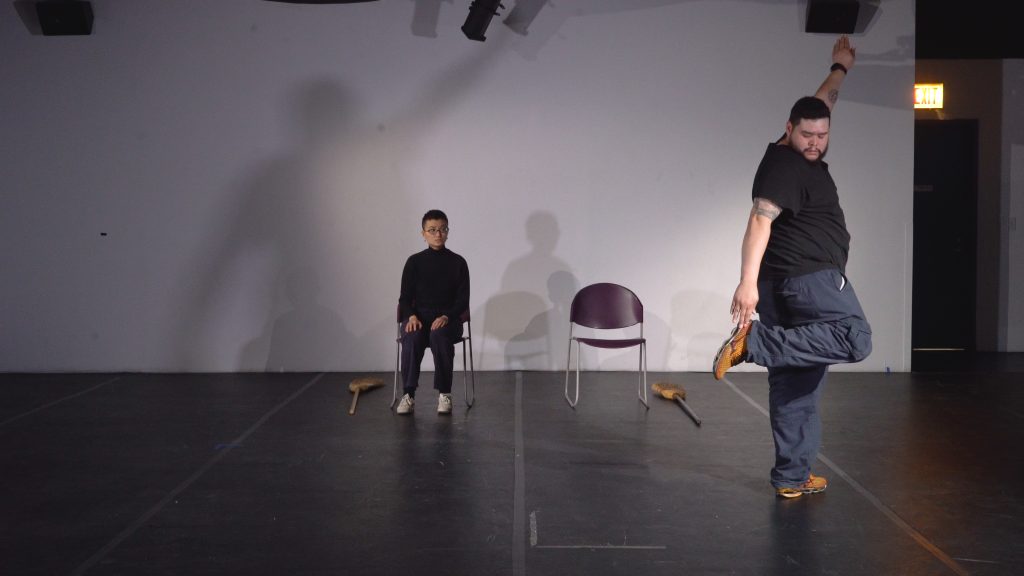 So I wasn’t surprised by a new video, “Untitled Parent Film,” which combines a 2019 commencement speech delivered by Ukeles at Yu’s master’s degree ceremony at the School of the Art Institute of Chicago. The film, recently in Mana Contemporary’s online program “Is It A Good Time?” weaves layers of footage, including Ukeles’ speech, Yu’s parents telling stories or reading texts and clips from other works. In an early scene, Yu’s mother says Ukeles’ line, “I became an artist to be free,” as Yu, offscreen, prompts her to say it again and again.

Adding her parents makes the work more personal, more vulnerable. When Yu was exploring performance art while an undergraduate at the College of William & Mary, she was the only performer. That stopped in grad school. “Moving to Chicago, to a city, changed the way I work,” she says. “I immediately became in relation to a lot more people, and that was really exciting.” But bringing in her parents, and influences like Ukeles, makes the work, at least in part, about Yu. Having her mother read Ukeles’ words about the lineage of male artists, and how the freedom of being an artist didn’t seem to apply to her as a woman, brings up questions for Yu about gender and the sacrifices of parents.

“I was trying to channel that but I didn’t really want to talk about myself, so I had my mom talk about them using someone else’s text,” Yu says. “All the things, like being a woman artist and the feeling like you can’t be free or holistic, I’m always haunted by that idea but I can’t put it into concrete words.” 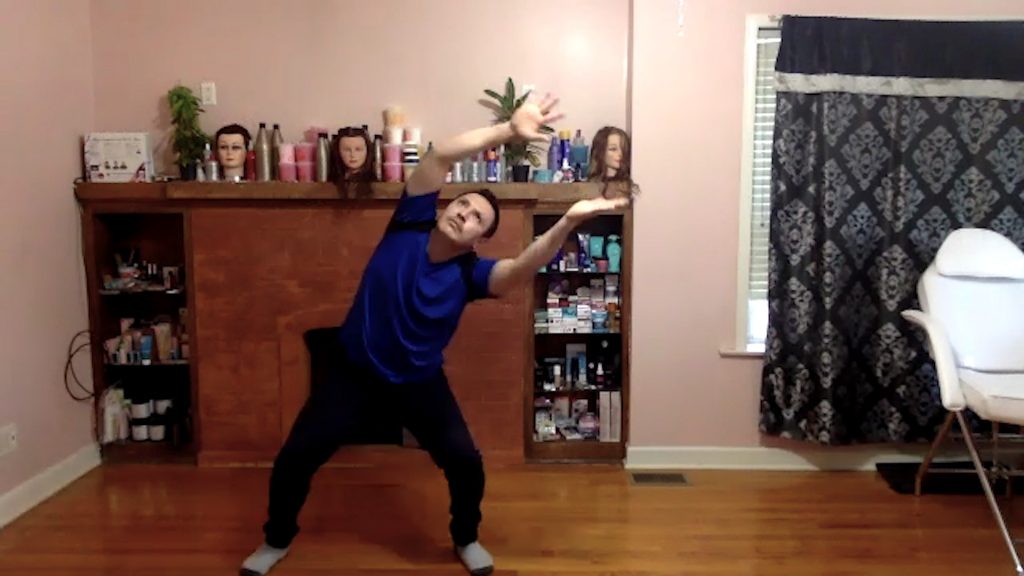 Another theme in Yu’s work is propositional, by using non-trained performers, she’s indicating to the audience that this is something they could also participate in. This comes across in an ongoing piece, “Trio A Translation Project.” In it, Yu works with a group of people from various professions. Those individuals choose a loved one to watch and describe Yvonne Rainer’s 1965 dance “Trio A”; that description is given to the performers, who perform the dance according to their loved one’s specifications. It’s a time- and labor-intensive process, with Yu rehearsing each performer virtually. In a portion I saw, Ignacio Morales, a cleaning person at a downtown building, dances in split-screen next to Enid Smith, a dancer trained by Merce Cunningham’s company. Like Lemus, Yu met Morales while he was at work, introducing herself and later telling him about the project.

“He was very excited about it, which is good,” she says. “All the projects that involve performers and non-performers, it’s the same. It requires this willingness on their part, that’s really all it takes, whoever you are.”

In these works, Yu offers the audience an opportunity to pay attention to the way we understand someone just by looking at them. What judgments are we making about Morales and Smith, or Feuerhelm and Lemus, when they are juxtaposed side-by-side?

“I was cracking at what happens when you look at someone you didn’t know from far away, what kind of ideas are you projecting on them?” Yu says, of “Lydia and Matthew.” “It’s the perspective of the film. It doesn’t zoom in, it stays there, you’re just watching for twenty minutes. How can you understand that person? What is the interior of a person per se if you’re looking at them as an image? I feel like the film was asking those questions. Staying on that surface level, and then trying to make an argument that if enough attention is paid and you notice all these things, maybe your perception could be changed a little.”