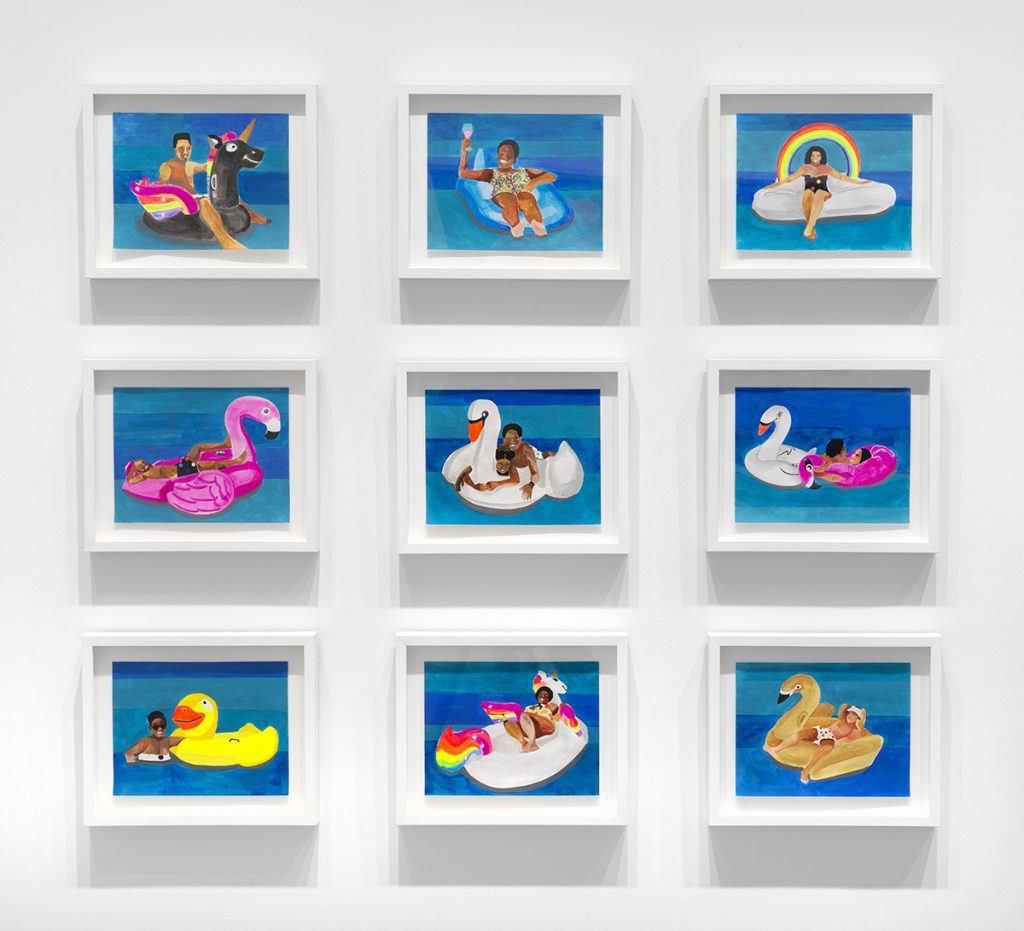 “I done wit’ you. I into history, now.” In 1955, Jamaican writer Andrew Salkey wrote in “Jamaica Symphony,” later published as “Jamaica” (1973). The poem explains the historic oppression of Black Jamaicans and the misgivings colonial settlers had in their perception of the land and its surrounding waters in relation to the people’s history. Derrick Adams’ “The Last Resort” features “Floaters” (2016-2020), a series that transports viewers to a similar moment where Black joy aims to de-link itself from white reason, inviting his people to rest, albeit momentarily, floating between the slippages of American history.

It is difficult to explain the erasure of the Black body in imagery linked to American recreation and to expound on the psychological damage of not seeing oneself reflected in the world one inhabits. So much of the experience of being Black in America is born of escape—escaping slavery and servitude and systemic persecution, escaping the pain of generational trauma—that Adams’ paintings feel like an American Dream rendering unabashed Black joy in full saturation. Black joy is the primary aesthetic of the work and it begins a conversation on who is afforded leisure in America, and why.

Adams’ paintings are bold technicolor acrylics on paper, where polyester fabric meets the cold plasticity of swimming-pool inflatables in chlorinated pools and sweet and salty water. Partially employing the dialect of synthetic cubism, Adams’ cubo-expressionist geometric formations birth figures against blue planes, at first emphasizing the strangeness of the image. He keeps each character suspended in a thin layer of ahistorical melancholia by not revealing their context. The majority of the series is painted larger than life in scale, reminiscent of Soviet-era relief sculptures which were associated with spiritual and philosophical ideas of artists of their time. The seemingly nervous smiles on the floaters’ faces are contrasted with restless and aggressively imposing emojis, integrated on surfaces and backgrounds, implying the pervasiveness of the technocratic gaze within our environment. The standardization of emoticons has led to the assumption that happiness or sadness or excitement look one singular way, while the experience of these emotions could well be starkly different within a body of color. Cleverly, Adams constantly reminds us how race, gender, politics and power dictate our visual culture, and how ecstatic joy only exists in relation to the extremity of violence. But this is not the sole aim of “The Last Resort.” 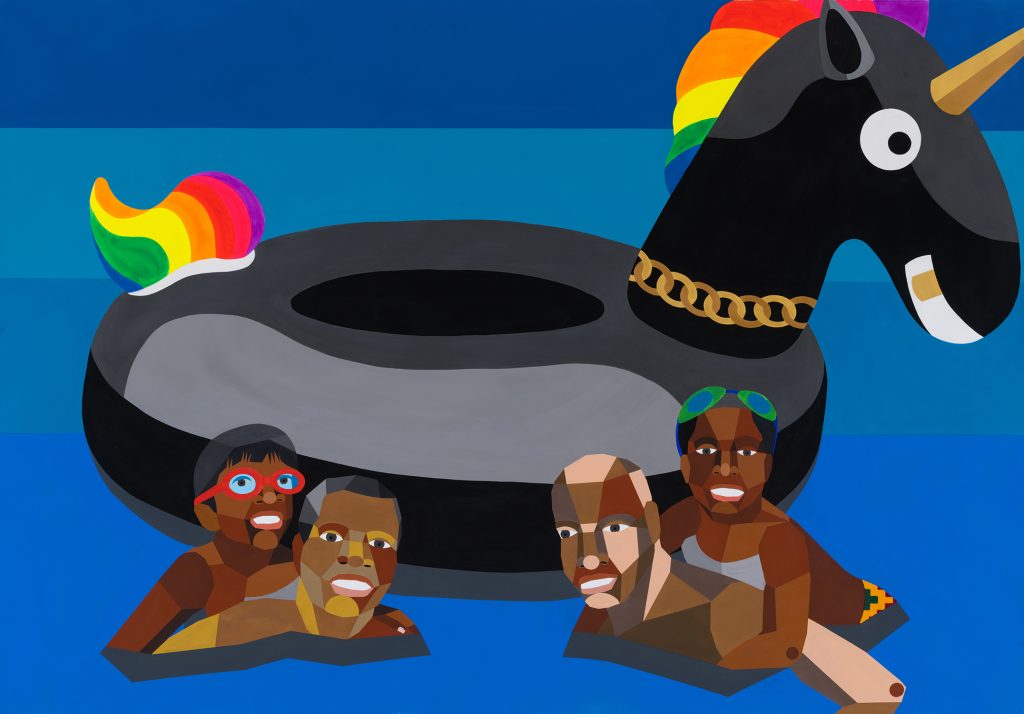 Adams created “Floaters” partially in response to images from an article in Ebony in 1967, which published photographs of Dr. Martin Luther King Jr. vacationing with his family in Jamaica. According to the magazine, Dr. King was in Jamaica to write what would be his final book, “Where Do We Go from Here: Chaos or Community?” when news reports about him vacationing broke. His response was, “I’m working as hard as ever. I’d like to vacation when I finish the book.”

If one were to read into Dr. King’s statement more deeply, a story of labor, exploitation and cultural oppression unfolds. “Floaters” is a story of ruin and rejuvenation in the United States, a country where Black lives have been taken unapologetically and without conscience for centuries. Over the last year, one of the most racially diverse countries in the world has been forced to confront its silences, setting into motion a series of protests against anti-Black racist policing systems across the world.

The unapologetic ease of “Floater 97” or the wild playfulness of “Floater 96” are a response to the relentless pursuit of happiness within a community at a time where assimilation no longer holds water. As cultural expression grows central to the form political struggle takes, it must be remembered that happiness is also contingent on safety. The presence of inflatables in the form of flamingos, unicorns and rubber duckies serve as a double entendre. They are floatation devices and uncomfortable signifiers that leisure is still predominantly afforded to the white middle and upper class. Adams’ paintings are part lived experience and part fantasy, where viewers are held uncomfortably close to the precariousness of being Black in a white-dominated society. If the American Dream were true, pleasure, joy and play would be abundant, too.

There’s something indescribable in experiencing this body of work in its entirety. Adams’ ask is exquisitely simple: Is there a place without trauma where Black joy can flourish? If so, where is it? As generational scars come to the surface for one half of the American population, the other half confronts its shame. While Adams proposes representation to be necessary within iconography, there is only so much that can be addressed in the mere act of it. Representation coupled with political, educational, healthcare and capital reform, along with climate justice and new environmental policies may begin to advance communities toward a more sustainable and cooperative future.

For now, there is the sun and the hope of summer in Chicago, and a dream where Black Americans and people of color don’t have to play cat and mouse for just a day in their long and healthy lives. (Pia Singh)