While much of the city and the art world within it was on pause this past year, this group of Breakout Artists continued their practices, although perhaps in new and surprising ways. SaraNoa Mark spent a lot of time at the lake, weaving conversations they had there into carved asphalt sculptures. Neireda Patricia donned a mermaid’s tail and swam around a fish tank-turned-gallery on Instagram. Nat Pyper serialized a sci-fi short story for a digital exhibition that considered the lives of Latinx youth within a heavily surveilled world.

These artists’ works also function, on some occasions, as entry points into envisioning a different kind of world. A world where we ask institutions for more than visual representation, as with the works of Unyimeabasi Udoh, a world where we slow down and appreciate daily rituals with family and friends, as with the cakes and process-based works of Hyun Jung Jun. With their many approaches, these artists ensure that our ideas of what art is continue to expand and that our community transforms for the better, creating ever more opportunities for connection and inclusion. (Kerry Cardoza) 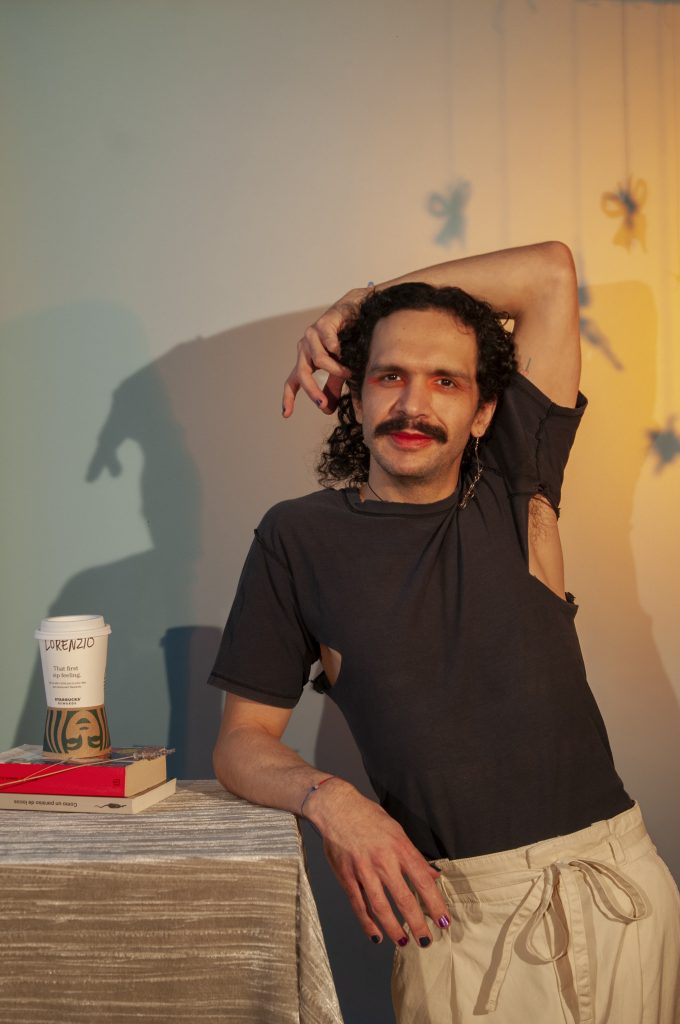 Flor (previously Alejandro Jiménez-Flores) surfaces, though tender, are never straightforward: in each composition, colors and materials come to the fore as if through the gauzy filter of a childhood memory. Look closely, and you might find dried geranium petals oozing pigment onto a cast plaster surface, beside the ghost of a pastel drawing. Or perhaps you might be taken in by the titles, phrases that seem to allude to fond memories or personal adages, slipping between English and Spanish. Flowers recur: drawn or painted, alluded to, or physically incorporated onto the surface, a touching motif laden with affection and meaning.

This process of translation and re-mediation through visual, material and verbal languages is at the core of Flor’s practice, which spans painting, writing and performance. In many pieces, the techniques seek to mediate the image through transfers and casts, producing objects that read like paintings but borrow methods from sculpture and printmaking. This approach emerged initially out of a desire to obscure the source and remove the hand of the artist. The flowers, present from the artist’s earliest works, appear as a stand-in for the self—a reference to their last name and to childhood memories of time spent in a garden. These were, at first, tactics to deal with “an anxiety about making, and an attempt to form a language and navigate identity,” Flor explains, as they transitioned from curating to a dedicated studio practice a few years after attaining a BFA from the University of Illinois at Chicago. This initial inclination has led to constant experimentation with materials and techniques (Flor has recently started to practice with makeup) and exercises like drawing from memory—developments that can be traced through a 2015 ACRE residency and solo exhibitions at spaces like ADDS DONNA, Heaven Gallery and Apparatus Projects. This practice has also generated personal narratives and allegories that undergird modes of making, turning up in titles, poems and performances, including two presented at Gallery 400 and the MCA. 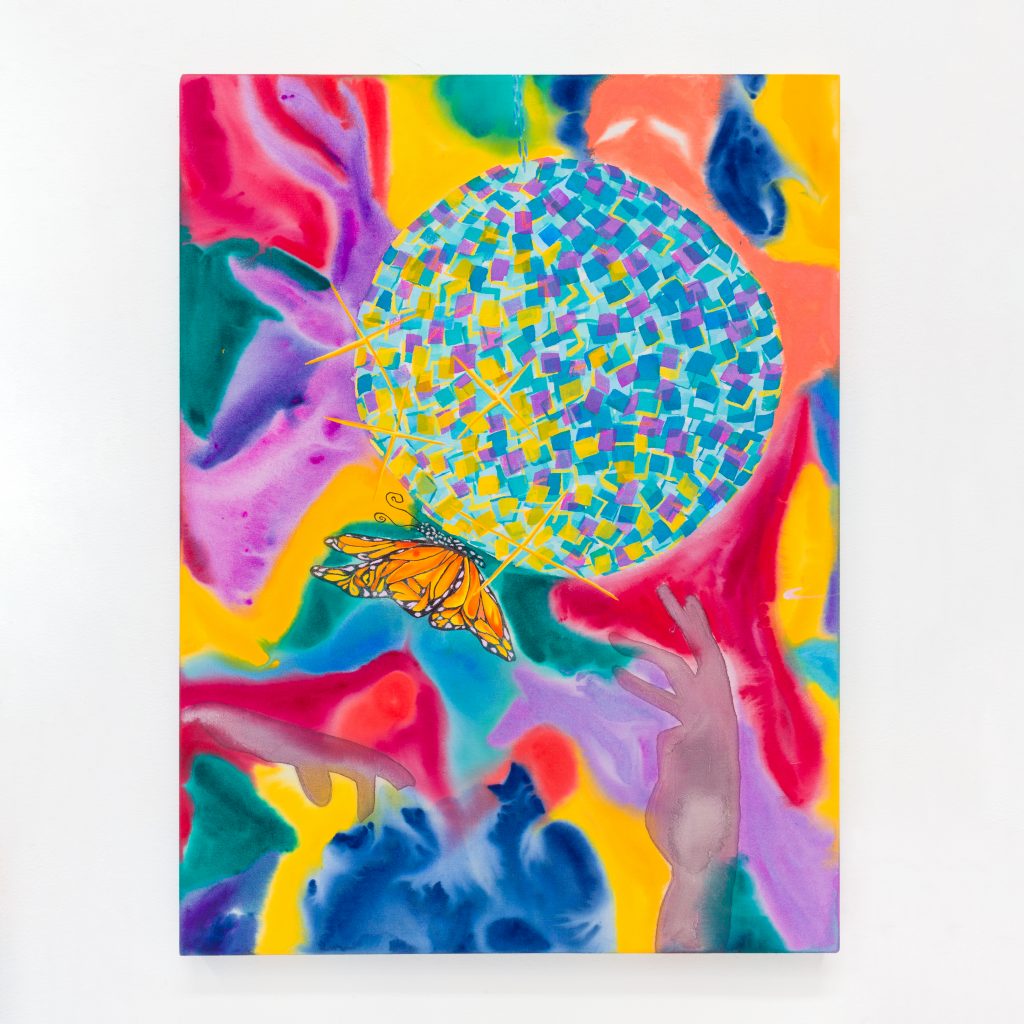 Storytelling and poetry appear in full bloom in Flor’s recent solo exhibition at the Chicago Artists Coalition, “una noche maravillosa–a monarch butterfly makes an entrance at a nightclub…,’ the culmination of a BOLT residency largely completed during the pandemic. Interspersed with the softly colored pastel transfers and drawings on plaster and muslin, there is a suite of vibrantly hued acrylic paintings by florencio. florencio is a conceptual persona, one that has long influenced their work, appearing through gestures and color schemes, or sensorially embodied through perfume and movement in recent performances. In the works at the CAC, florencio reaches a new level of agency and a mature visual language with paintings that follow the story of kiki, a monarch butterfly that breaks from the group to find the liberating worlds of apéritifs and dance floors. This trajectory is also told through an illustrated poem in a collaborative publication, “kiki: una noche maravillosa,” released in tandem with the exhibition. Through the doubled narrative of kiki-as-told-by-florencio, these paintings touch on questions of identity and belonging that more elusively permeate other works. Flor, who was born in Mexico and built their artistic practice in Chicago, explains that these are ways in which they are beginning to parse categories like queerness and Latinidad, which also frame their work at DePaul’s museum-wide exhibition “LatinXAmerican” (on view until August 15) and an in-progress longform poem on the term “Latinx.” 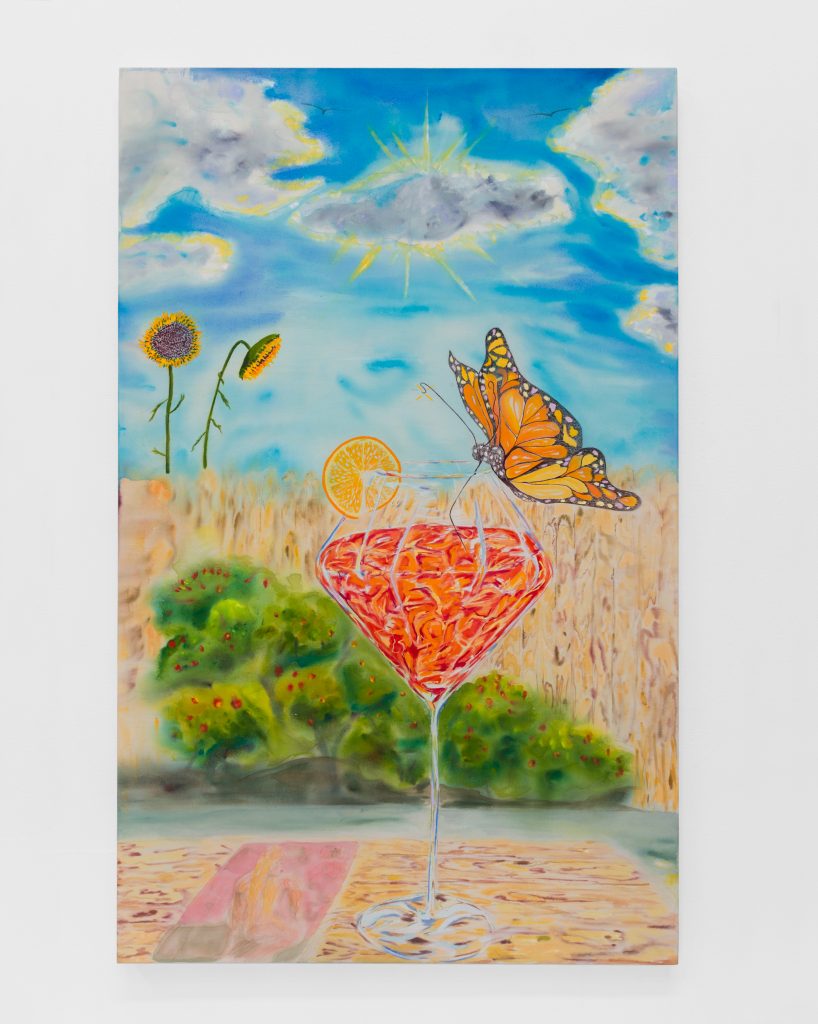 Flor (florencio), “florencio paints a portrait of kiki as she takes a sip from an unattended Aperol Spritz on a patio… que tulipan tan raro…,” Acrylic gouache on muslin 20 x 32, 2020 /Photo: Holly Murkerson

Through poetic and material mediation, Flor circumambulates the presence of the self: the artist’s hand, body, identity. At the same time, the work is filled with affection and memory; a sensibility for what is lost and gained in the process of translation and for the rich interstitial spaces between identities, languages and techniques themselves. The result is a playful, nuanced and open-ended treatment of the experiences that make up one’s self, gently resisting categorization and containment. (Cecília Resende Santos)