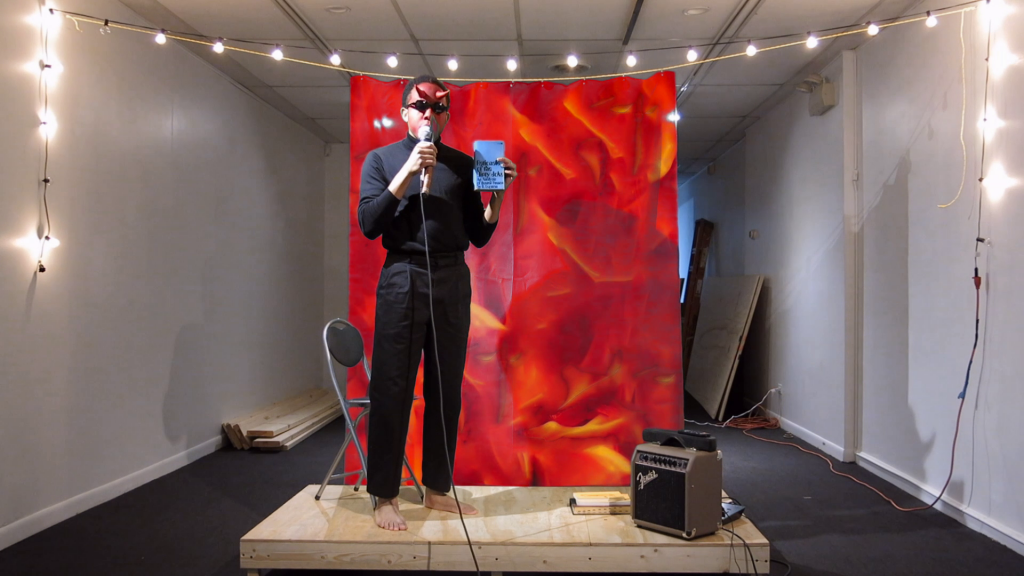 During one of our studio visits, Max Guy calmly and meticulously filed scans into a giant binder, as one would organize baseball cards or similar memorabilia. We talked about everything but art: sharing personal anecdotes, what we made for dinner last night, suggesting books and texts to each other, and rarely—if at all—looking at images or objects. Though recent exhibitions are abundant, it’s clear that exposure is not Guy’s endgame. He seemed surprised to receive the “Breakout Artist” superlative. I get the distinct impression that Guy is, through his creative process, simply trying to make sense of it all. Progress is slow, but linear, a sentiment reflected in this statement about his practice: “[I] keep things under wraps, keep working, and then suddenly the time comes and [I] just have to trust that there’s been some underlying current.” 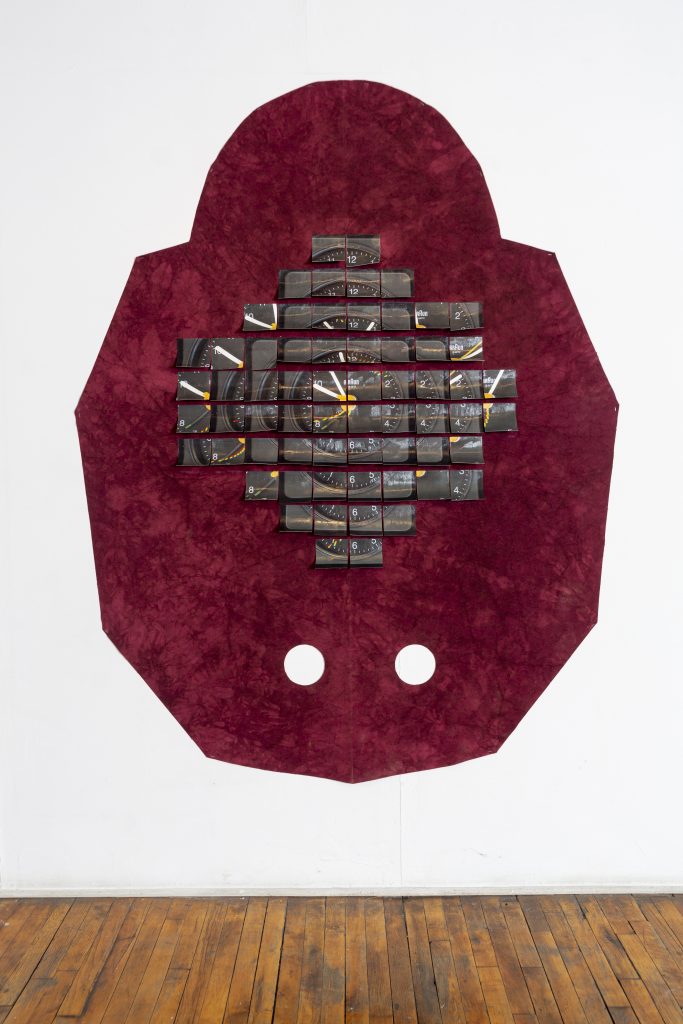 When I met Guy in 2018, his work directly confronted increasing governmental encroachment on personal privacy. Subverting the tools and processes used in facial recognition software, he mutated his own face to create a protest “mask” in the form of a picket sign. This algorithmic remix of a self-portrait effectively obscured the identity of the protestor. Since then, his fascination with distillation of the figure has led to more mask-making, silhouette-cutting, and enigmatic performance work. He uses indexical mediums almost exclusively, as organization and structure are imperative: photography, time, tarot decks and the employment of scanner beds as cameras. Through the use of green screens, reproduction and experiments in scale, he continues to mediate and distort straightforward source material, as he did with his own face when I first encountered his work. 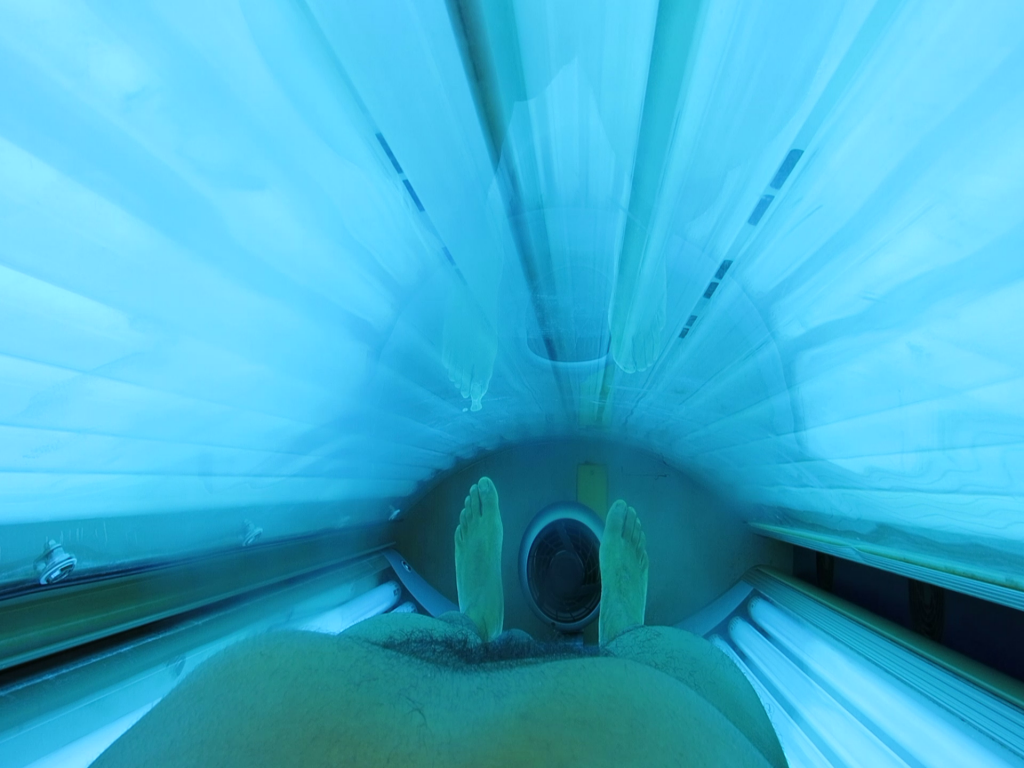 Guy wonders if his oeuvre seems disparate, but I see variations on a theme. He distills big ideas into simple forms, which become a visual lexicon of images used and reproduced through cutting, CNC routing and other subtractive processes. He is interested in hidden meanings and works to reveal narratives concealed within structures, still lifes and other unassuming places. He imbues his compositions with allegories that appear elementary to the naked eye, piecing together arbitrary elements into holistic narratives. Guy grew up in New York City, close to Chinatown, and devoured East Asian cultural exports of the nineties: anime, manga, video games. Thus, the art and philosophies of East Asia are woven into his constructed mythologies and tableaus. 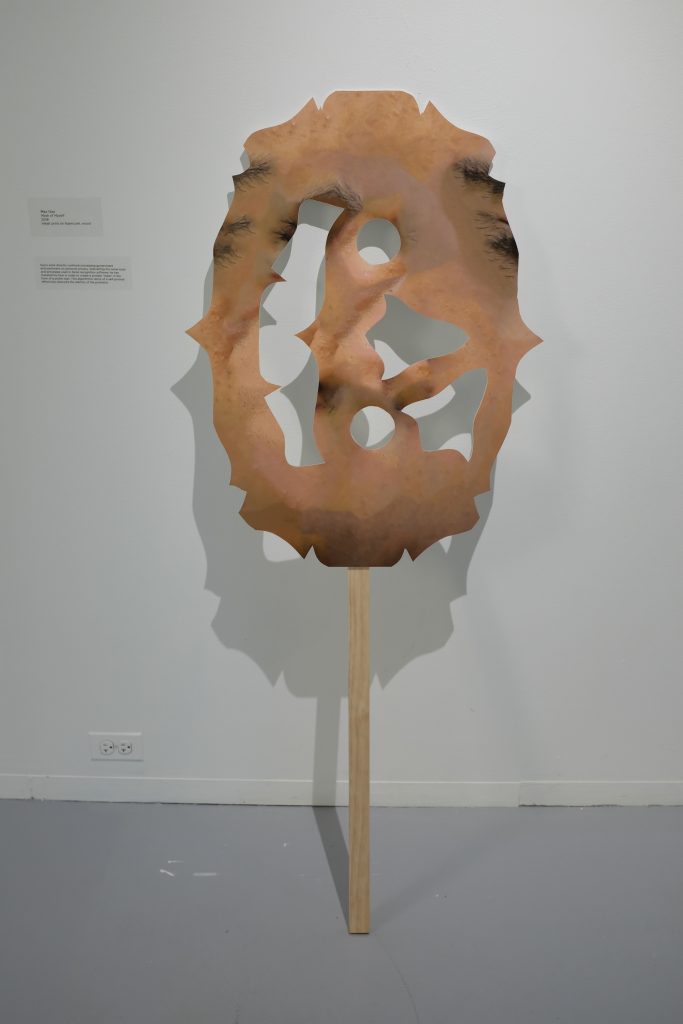 Guy is quick to point out that his works are not polemical. He’s not saying anything at all, rather presenting visually jarring juxtapositions. A Black body in a UV booth at a tanning salon. The Chicago River dyed green on St. Patrick’s Day, digitally altered so that the water is black. A tedious demonic figure obsessed with the banal. Bodies, contorted and crumpled, fused together on the floor. These images are provocative but not positional. Mundane subjects or contexts are altered ever so slightly—just enough to make the viewer say, “huh.” I am reminded of Steve Locke, musing about discourse (or lack thereof) in Artforum: “I wonder if people know that when they are talking about an artwork, they are actually talking about themselves.”

Guy was recently in “Duet,” a two-person exhibition with Shir Ende at The University of Illinois Springfield Visual Arts Gallery, and a group show “Sustainable Societies for the Future” at the Malmö Konstmuseum runs through May 23. Upcoming exhibitions include group shows at Apparatus Projects, the Chicago Cultural Center, and Krannert Museum of Art, and a solo exhibition at Produce Model. When not making or pondering art, Guy can be found studying Hebrew and Japanese, reading tarot or geeking out about Pieter Bruegel. He looks forward to eventually owning a bonsai tree. (Erin Toale)