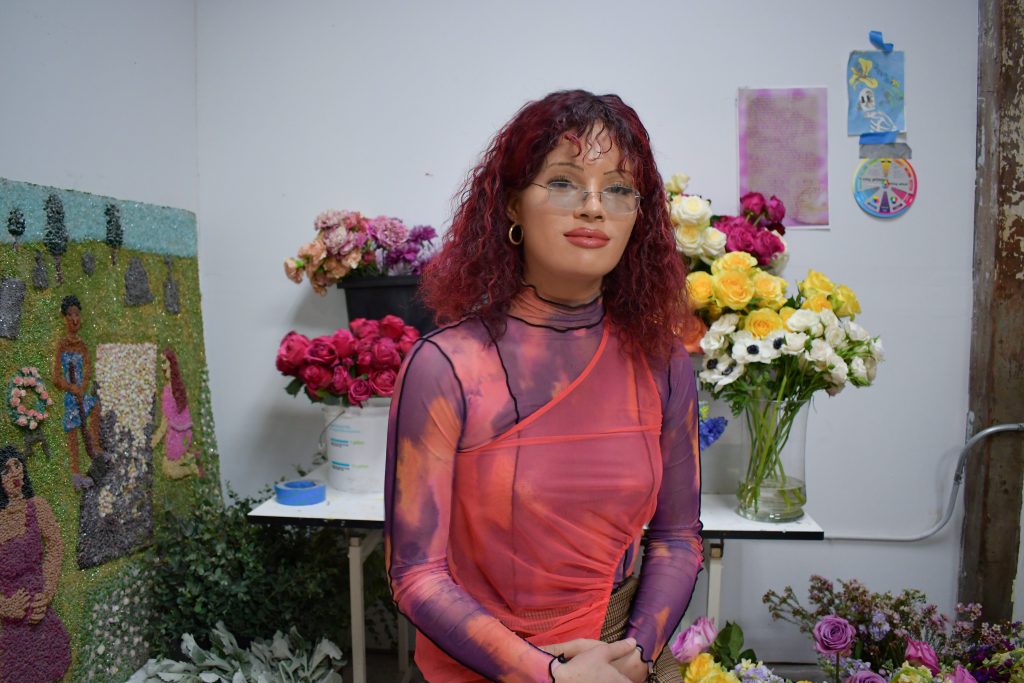 Nereida Patricia first appeared on the Chicago art scene with “Death Fantasy,” the unforgettable 2019 exhibition at Prairie. The artist, who at the time was an undergraduate at The School of the Art Institute of Chicago, brought magic and myth into the exhibition space. The Pilsen gallery’s pool-blue walls and bright lighting transformed the space into an aquatic fantasy, so much so it felt out of place that no scent of chlorine or saltwater wafted through. On the walls were three reliefs: “Ms. Colombia,” “Thinking About Death” and “Burial Sequence.” Patricia takes inspiration from arpillera tapestries, a form of women’s craft-turned-protest art that originated in Chile under the Pinochet regime and which spread across Latin America. Patricia, who is Peruvian, grew up around those images. Materially, she is drawn to things that are sparkly, and that you wouldn’t typically think of as fine-art media. Walking closely to Patricia’s relief—made of glass beads, glass dust, glitter acrylic, paper clay and wood—it’s a surprise to see the beads catch the light so effervescently. The visual playfulness and sense of wonder from the glittering beads balance the narrative that Patricia has constructed. Patricia’s work often deals with the gender-based violence, death and erasure of trans women, particularly Black trans women. She honors their lives by creating artworks that imagine new mythologies for these women who have paved the way for the LGBTQI+ community, as well as more personally for Patricia herself.

“Trans people are magic,” she says. “There’s this whole kind of magic and mythology that I’m always chipping away at.” Her work is a beautiful and healing gesture for trans and LGBTQI+ people who yearn to connect with their history and their elders.

In a performance that accompanied “Death Fantasy,” Patricia transformed into a mermaid, reciting a creation myth. “I was this post-apocalyptic mermaid that was a prophetess giving the transformation story of trans women and trans people becoming merpeople,” she says. In the corner was a human skeleton, “Transexualis.” Patricia said members of the audience envisioned it as narrating dysphoria, which she agreed with. An exhibition at Bubblez Gallery in February also incorporated mermaids. 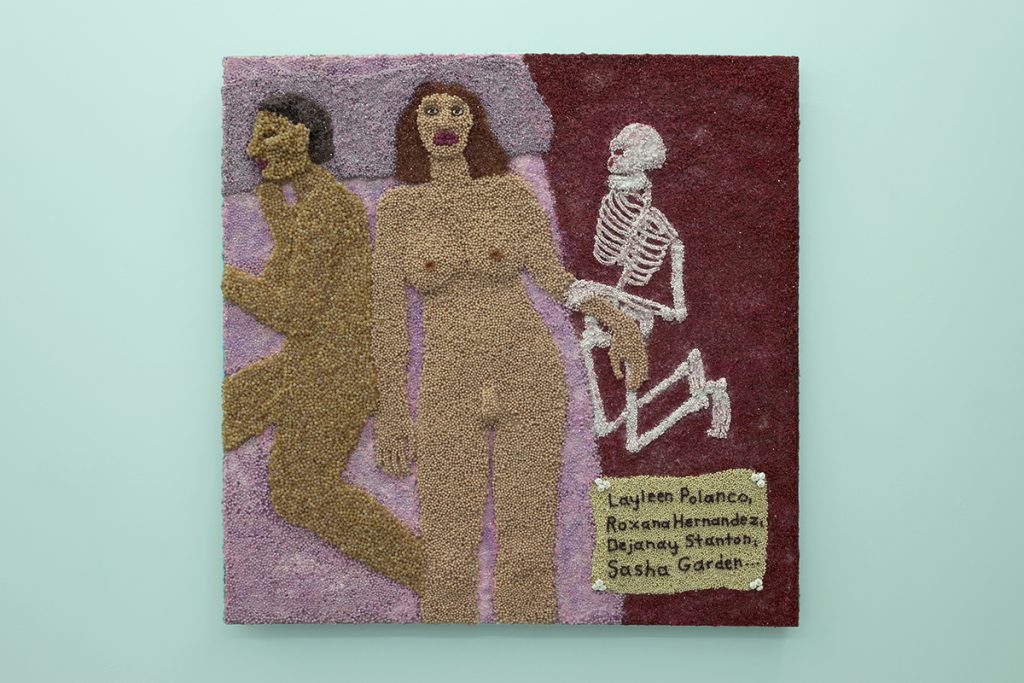 “Ms. Colombia” and “Thinking About Death” are on display in the MCA’s “The Long Dream.” Her work was included in The Museum of Contemporary Art Detroit’s “Emergency Response” digital exhibition and fundraiser, where she sold a relief that told a story of one of the first times she saw a trans elder of color. “We survived” is transcribed in a banner. 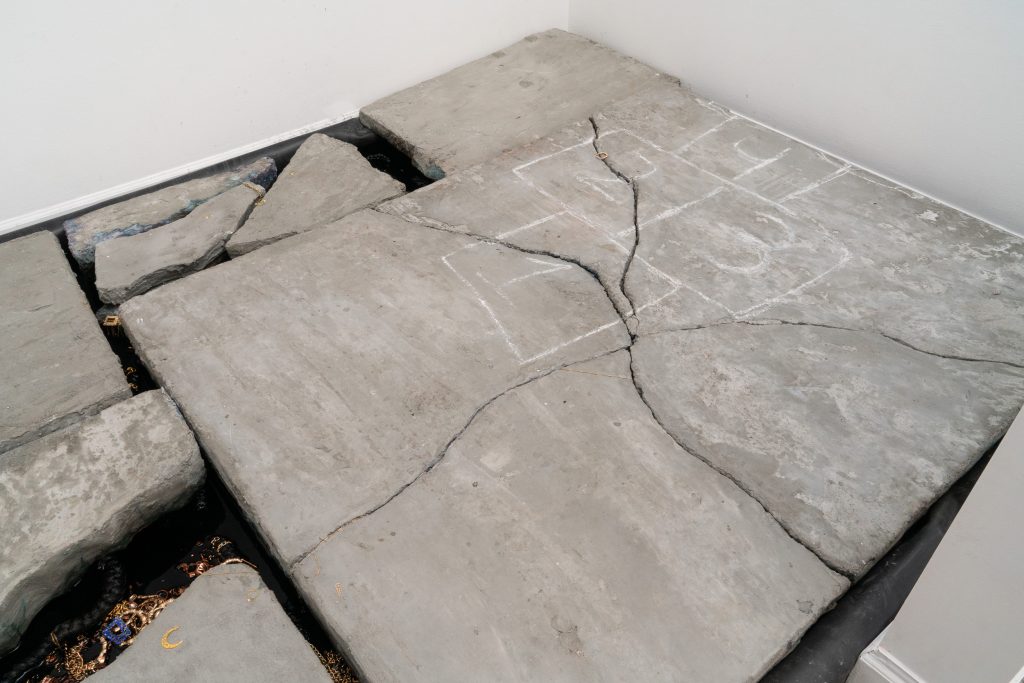 2020 was eventful for Patricia. Alongside the two museum exhibitions, the twenty-three-year-old had her second solo exhibition, “Body Party,” at Roots and Culture. The exhibition dealt with trans visibility politics and the body as spectacle through a consistent theme of abstractions of the body. “I’m always thinking of outlines, things that can or cannot contain a body, and how things can be flattened or made invisible,” she says. “Birthday Cake” (“Fetish Series”) was a body-sized cake that resembled Ana Mendieta’s “Fetish Series,” an effigy and a casket. “Black Narcissus” was a sidewalk fountain that revealed bits of Kanekalon hair and jewelry under a black reflecting pool, referencing the Greek myth of the hunter who fell in love with his reflection.

In a Trans Week of Remembrance video that also served as an update on Nereida’s (SRS) Butterfly Fund, Patricia signed off with a note that encapsulates the energy and care her work transmits to the LGBTQI+ community. “For trans folks on Trans Day of Awareness who are mourning the violence of trans people… take care of yourself. Do things that would make the inner trans child, inner girl, inner boy, inner kid in you happy and held and safe.” (Celia Glastris)