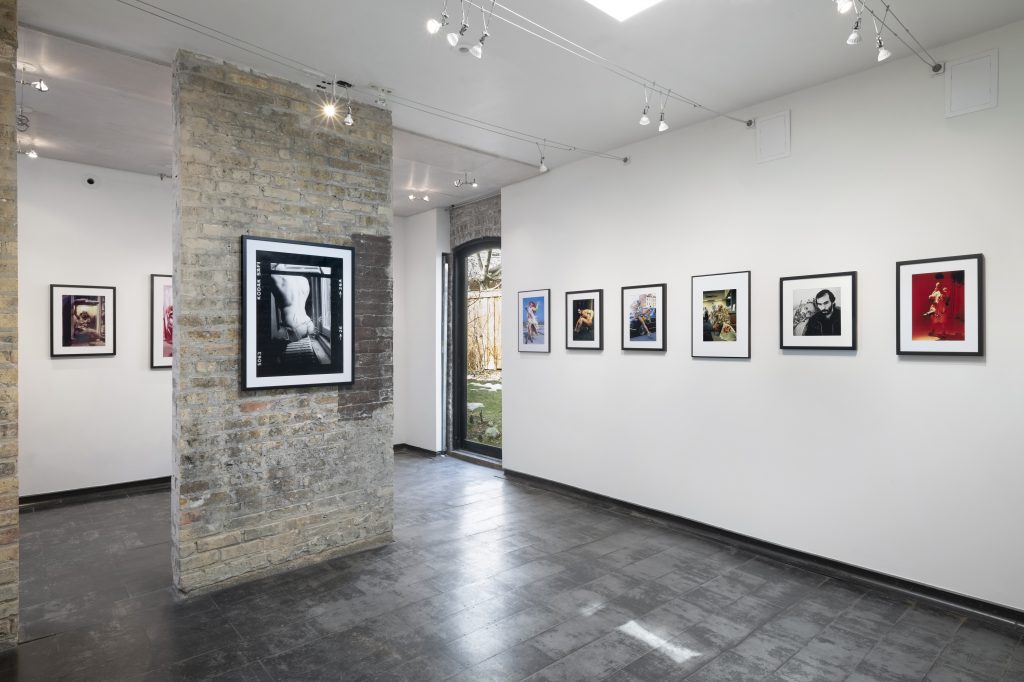 In the 1970s and 1980s, Stephen Varble made groundbreaking work that blurred gender lines and questioned the bounds of authority through performance and through fantastic costumes made from layers of tulle and trash. “The Gutter Art of Stephen Varble: Genderqueer Performance in the 1970s, photographs by Greg Day,” curated by Chicago-based Varble scholar David J. Getsy, and on view at Iceberg Projects after showing in California and London, encapsulates Varble’s spirit, his relationship to the camera, and his most frequent photographer Greg Day, a cultural anthropologist who photographed the civil rights movement and continues to work as a documentarian of queer culture across the United States.

In each of the photos, Varble performs for the camera in costumes made of accoutrements, some literally pulled from the gutter. In one series, Varble dons a farthingale-inspired hoop skirt layered with tulle and topped with a chest piece, sleeves and headpiece fashioned from egg cartons. His poses in the flowing garb, captured by Day on a New York rooftop with iconic skyscrapers in the background, are fierce. 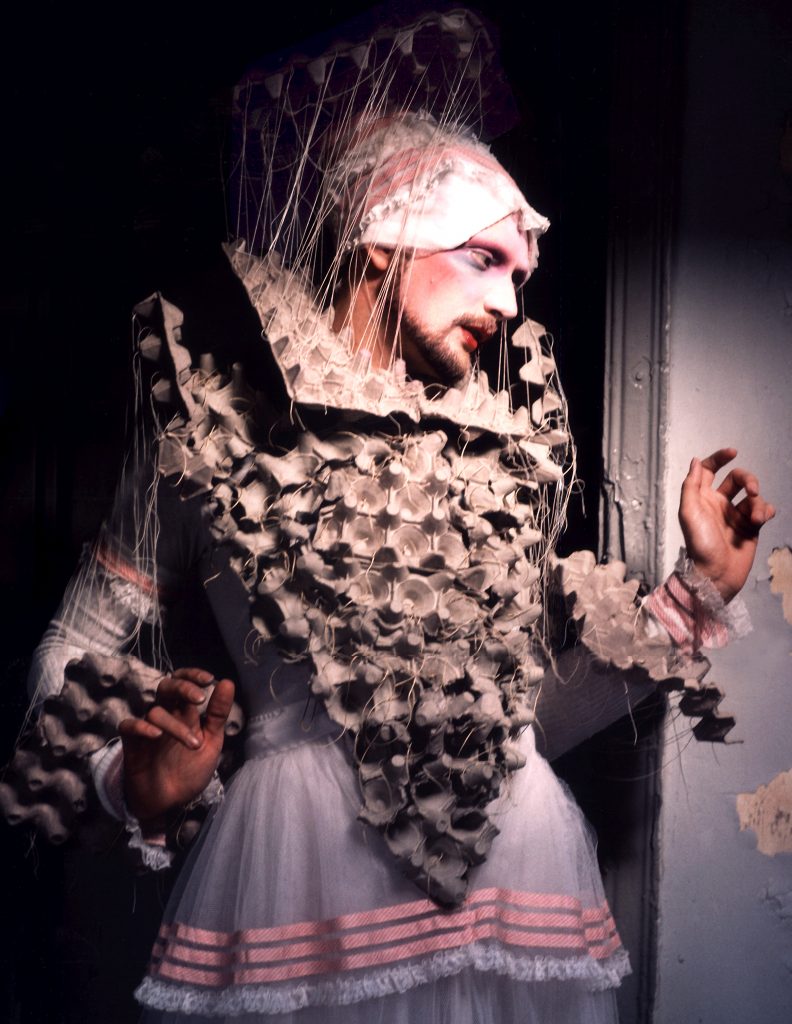 Other photos in the exhibition are equally fantastic. In “Stephen Varble in the Piggy Bank Dress,” Varble poses in a crimson dress composed of silk breasts, a penis and labia, a costume he wore while crashing the Rizzoli Bookstore Fashion and Fantasy exhibition opening. In “Stephen Varble in the Suit of Armor,” he leans against a door frame in a shift dress made of golden Seagram’s boxes and plastic six-pack holders. In yet another, green strips of paper drape Varble’s shoulders and blue strips wrap around his exposed legs and Mary Jane heels. Varble’s head is angled back, a shock of a long, curly pink wig cascading behind him. As the title of this piece indicates, Varble is in the act of tearing the dress apart in this shot (only fragments of his costumes survive).

Every element of these images—the costumes, the wigs, the makeup, the backdrops—come together as deliberately staged worlds. They’re all-encompassing. They highlight Varble’s ability to make things incredibly aesthetically pleasing, of which Varble is hyper-aware. In one of the images of Varble in his farthingale egg carton dress, he holds a sign that reads “The Ultimate Decoration is Stephen Varble!”

It’s true: Varble is the embodiment of a gorgeous decoration, and yet his work is utilitarian—it serves a purpose. It is activism.

All of Varble’s work includes a blurring of gender roles. In some images, like “Piggy Bank Dress,” Varble is male and female. In others, he is decidedly female. He sometimes performed using the moniker Marie Debris. He collaborated frequently with others active in the New York scene at a time when genderqueer culture was not accepted, and gay sex was still a felony. They made themselves known in public as passersby spat and threw rocks. To quote Greg Day, who put it eloquently, “Varble and his comrades were ‘courageous pioneers who dared to perform on the stage of a dangerous and hostile world.’” 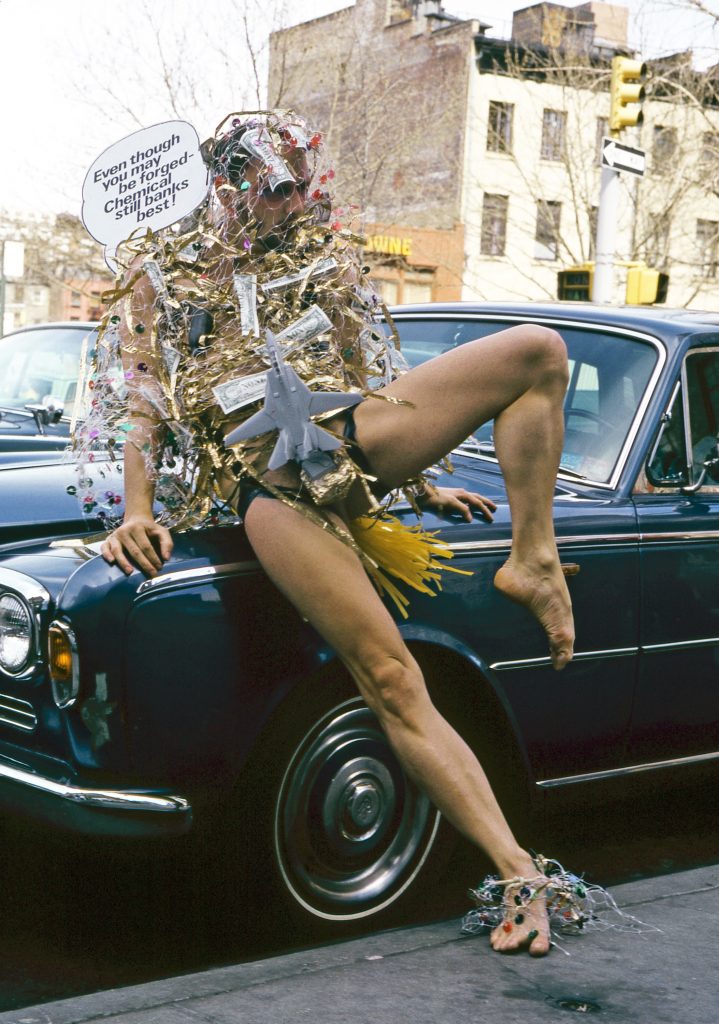 Greg Day, Stephen Varble in the Demonstration Costume with Only One Shoe (for the Chemical Bank Protest), 22 March 1976. Digital print, 2018. © Greg Day, 2020, www.gregdayphotgraphy.com

Varble’s activism extended beyond the realm of LGBTQ+ issues. The exhibition includes images of Varble’s protest at the Chemical Bank, a primary funder of the gentrification that was happening in Soho in the 1970s. Varble wears Christmas tree packaging stuck through with dollar bills that winds around his torso, up his arms and over his head. In one image, Varble sits with a bloody cloth draped over his thigh after puncturing a blood-filled condom with a pin to write checks for none-million dollars (a response to the bank’s refusal to reimburse him for a check forged by an ex-lover). In another, set outside of the bank in advance of the performance, Varble, resembling a Greek wrestler as he flexes the sinewy muscles of his leg, leans against a limousine borrowed for the intervention.

The exhibition also features Varble’s film “Journey to the Sun,” a sprawling operatic masterpiece deserving of its own review. This work was Varble’s swan song and features a barrage of the staging, colors, beauty, queer costumes and performers typical of his work. The excerpt included at Iceberg Projects is just a sliver of the longer version Varble was working on when he died of AIDS in 1984.

The beauty of this exhibition is bittersweet. There was a love for the gutter, for the ability of trash to express a beauty other than the gilded book stores and banks in a pristine Soho. And yet there was a pain and sorrow there—so many people active in the scene, including Varble, lost their lives as a result of the AIDS crisis. There was a fight not just for that love to be recognized in public, but to make masses aware of those lives, and for those lives to be treated humanely, with care. There is hope as this work is being recognized more and more now, to hear the stories told through cameras of archivists like Greg Day and experience the work of important figures like Varble. (Holly Warren)