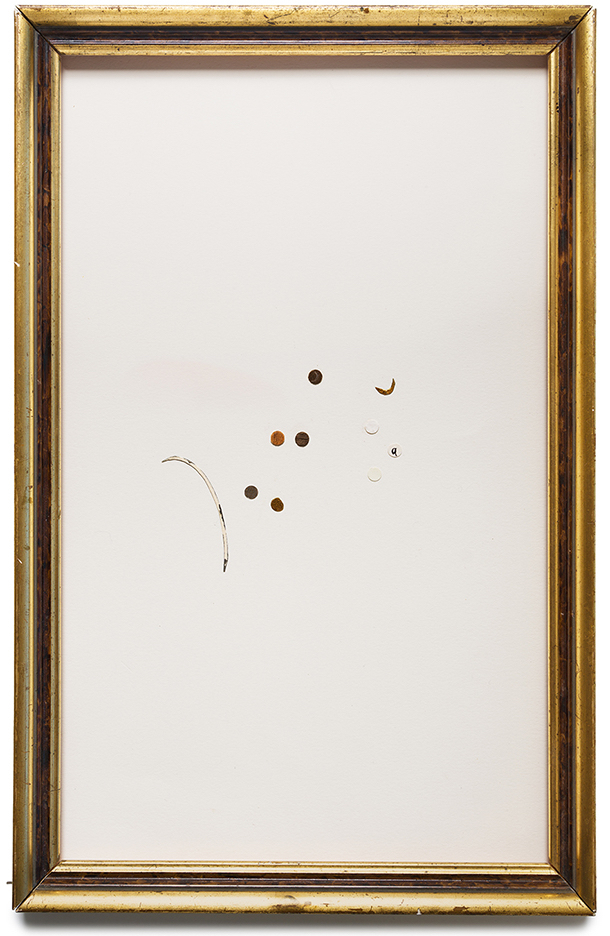 Dancing about architecture never struck me as a bad idea. Some days it makes more sense than writing about painting. Something similar occurred when artist Antonia Contro texted a photo of a collage to her friends, violinist Clara Lyon and cellist Hannah Collins, last March. The improvised ukulele-plus-whistle tune they sent in return to Contro’s drawing of a mountain guide pinned to sandpaper sounds just right, all the more so when art and music are presented together as a short video animated by a breeze. Begun in the lonely confusion of the early pandemic, despite, or more likely, because of, social distancing measures, the trio’s collaboration has continued, generating an almost daily artistic correspondence whose emotional resonance ranges from elegiac to silly. An especially charming example of the latter involves a handful of wood veneer and gold-leaf hole punches that can’t help but jump around on the page when prompted by plucky instrumentation. Viewable as part of “Only Connect,” a recent group show at Chicago’s Carrie Secrist Gallery. 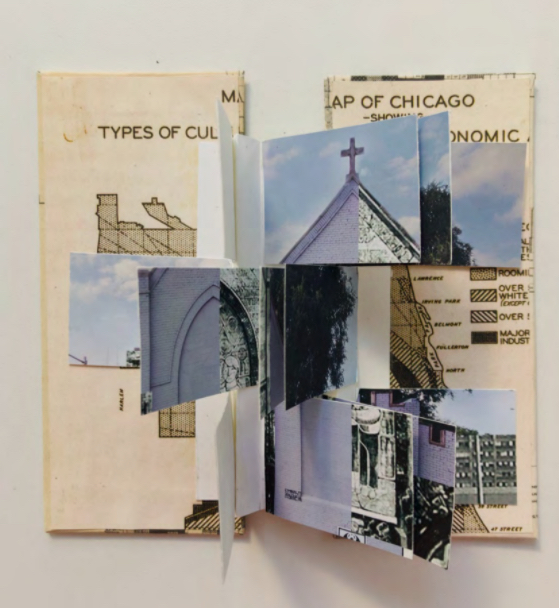 Haerim Lee, “A story that needs to be told (All of Mankind photo and Chicago map),” 6 x 8 inches, print on archival paper and cutout board, 2021

When in 2015 a developer whitewashed Bill Walker’s “All of Mankind” mural in an effort to sell the Chicago church the front of which had been graced with the African-American artist’s multicultural vision since 1972, it marked one in a long series of such losses. Memorials feel appropriate, and Haerim Lee has made an entire exhibition of them in “Site Specific Memories” at Parlour and Ramp. Inviting handmade books use copies of maps and photographs to craft intimate packages where the before-and-after of the mural are intertwined. Tucked inside boxes, they are keepsakes that unfold with a deserved tenderness. Lee takes a different tack with a series of small textured monochromatic paintings created with sand and paint scrapings from 617 West Evergreen, the original site of the church. These panels resemble stucco, plaster, tile and brickwork, as if they were architectural relics, meaning embedded deep in their materiality. By remembering Walker’s mural both overtly and obliquely, Lee not only creates a deserved tribute but develops it along the parallel tracks of monumental public sculpture today, proving the need for both the representational and the abstract. 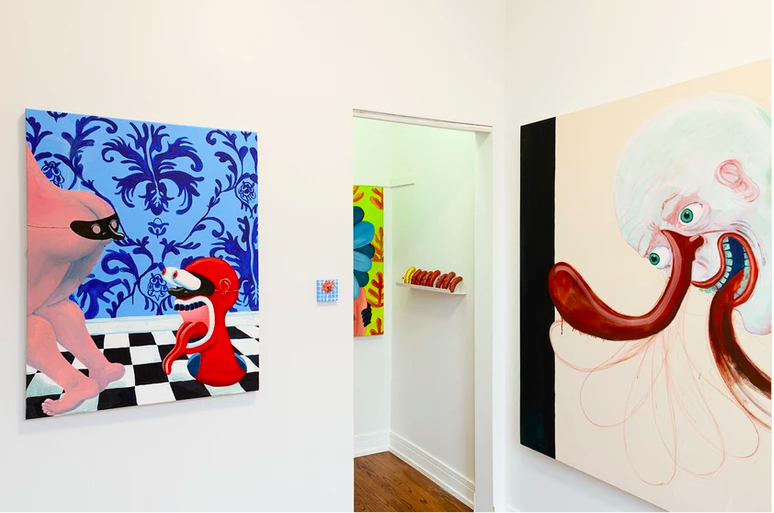 Ah, the sausage. Fodder for such luminaries of art history as Dieter Roth, Paul McCarthy, Ed Ruscha—and now Patrick Wilkins. In “Indiscriminate Sincerity,” his ingeniously titled solo show at the Ukrainian Village apartment gallery Extase (seriously, “indiscriminate sincerity” ought to become a phrase in regular circulation), Wilkins presents oversize cartoonish paintings rendered with unsettling care, creepy ceramic hotdog figurines and worrisome little paint-lid doodles. Unlike his artistic predecessors, Wilkins does not literally use foodstuff to make art, rather he proceeds like the Whole Foods butcher he once was, mincing and seasoning all sorts of meaty scraps into tasty individual packages the origins of which it would be best not to examine too closely. Appetites might be lost in noticing the combination of creepy clowns, wiener stand icons, decorative wallpaper, Viennese masquerade, classic animation and, naturally, rampant phallicism. Chicago Red Hot with all the fixings, anyone?