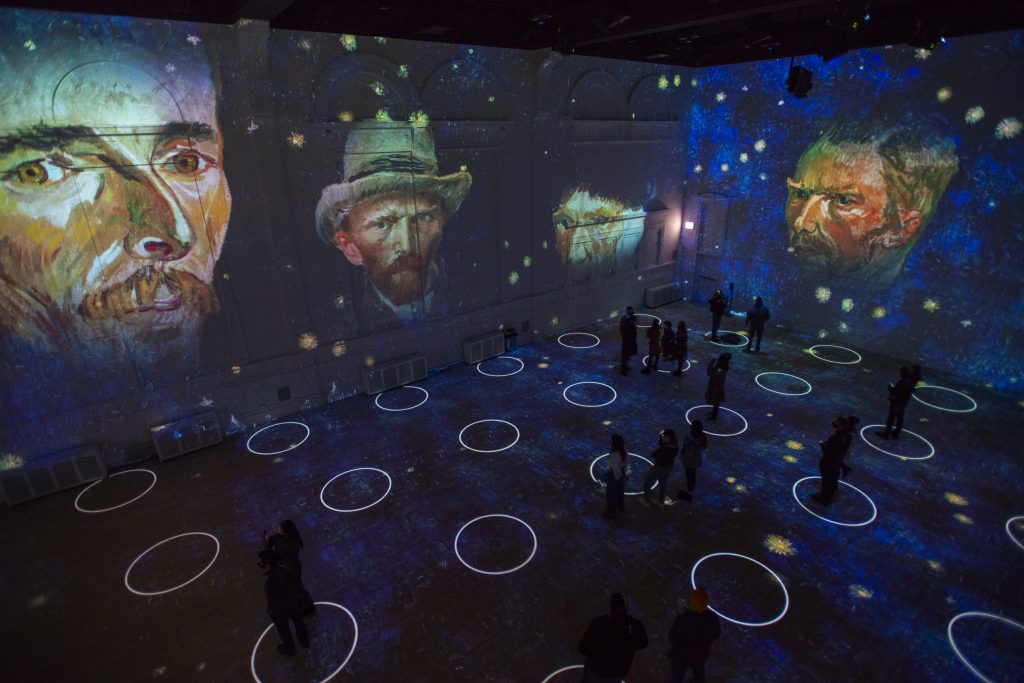 The “Immersive Van Gogh Exhibit” was not conceived with COVID-19 in mind. Nevertheless, the exhibit suits our era of forced distances well, as if meant all along for those of us eager for art in shared public spaces. Also for our hunger for some bigger context for the psychic trauma of a maddening time, our collective version of what the artist called his “terrible fits of anxiety… feeling of emptiness and fatigue.” Amid his trials, Van Gogh discovered new light in the world and produced his blazingly lustrous canvases. In the exhibit, that light is amplified, too. 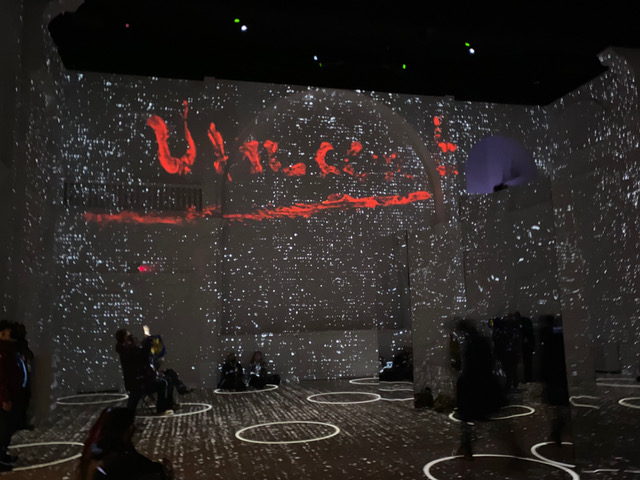 Walking into the installation now illuminating the interior of the former Germania Club, visitors are guided through the tall, semi-dark rooms to take their places in circles of light drawn on the floor. In other cities where the exhibit has traveled, the exhibition filled large, modern, rectangular spaces. The old club, however, is a Victorian-Romanesque confection and the exhibition in Chicago meanders through several rooms. Even the club ballroom is small compared to spaces in other cities, so the show is both more intimate and more varied here. Some viewers stand, others sit and some lay down to gaze at projected images drawn from around forty examples from Van Gogh’s work. The images change, elements move, grow and shrink, and at all times cover the entirety of the rooms’ walls, doors, arches and floors. The restless interiors, fields and skies that Van Gogh painted are supersized and etched in pixels by lasers. While Van Gogh said he aimed for a “lullaby of colors,” the “Immersive Van Gogh Exhibit” is an opera. And like opera, it deploys the grandest presentation to deliver intensely intimate moments. 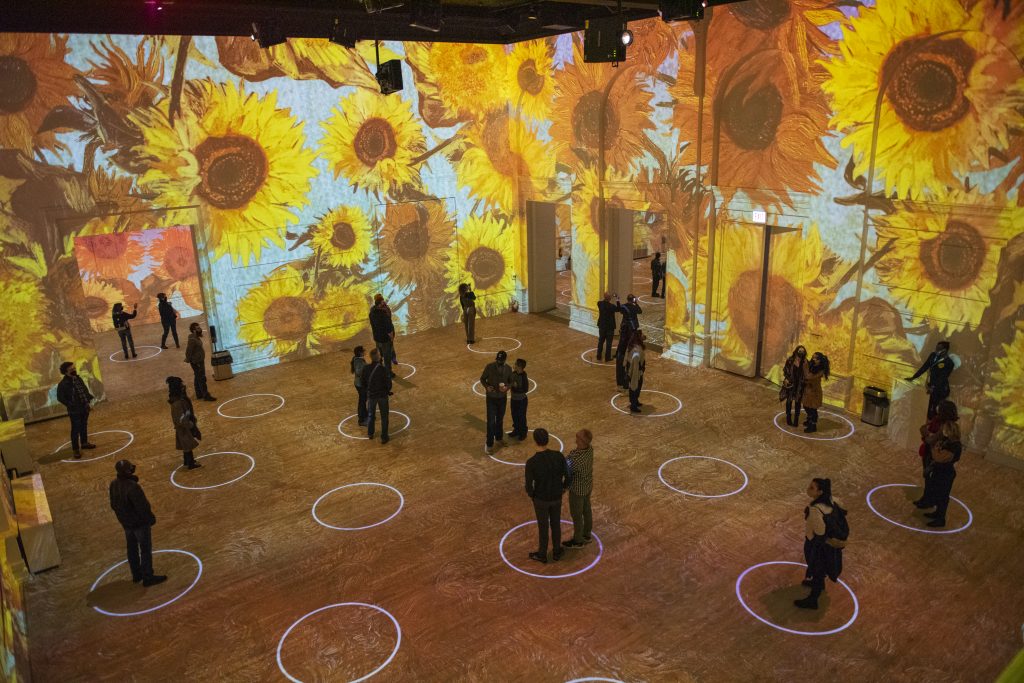 As stunning as the first giant images are, in our weary era the views of people inside the space are just as gripping. Figures of visitors silhouetted like shadow puppets against the lit walls rise slowly from one circle to move, almost floating, to another, and sit or stand still. Even in the dark, we visitors are aware of each other and the distances between us. How we move and share the space feels choreographed, like a company of dancers in sync before a backdrop that sets us in a different time and place. Van Gogh’s time and place. The assertively formal architecture of the Germania Club was opened to its members in 1889, the year Van Gogh completed “Starry Night,” so we really do get to see one another in a conventional environment of Van Gogh’s time, and—together, but respectfully apart—feel it transformed by his unconventional vision.

“I did not anticipate the distancing of the viewers,” says Massimiliano Siccardi, the creative hand who scripted and directed “Immersive Van Gogh,” “but we were lucky, because the circumstances allow us to breathe with the art.” Visiting from Rome over a video call, with “Starry Night” as his virtual background, Siccardi braved explaining his concept and approach through a translator who rendered his Italian into English. Siccardi rejects the description of himself as a “director,” preferring the Italian term “visionario.” The ready translation would be “visionary,” but it doesn’t quite work. As he frames it, his role as visionario, is to channel the state of the artist when the source works were created, and also communicate to the audience the thoughts and sensations Siccardi himself experienced in relation to them. And to create theater out of them. 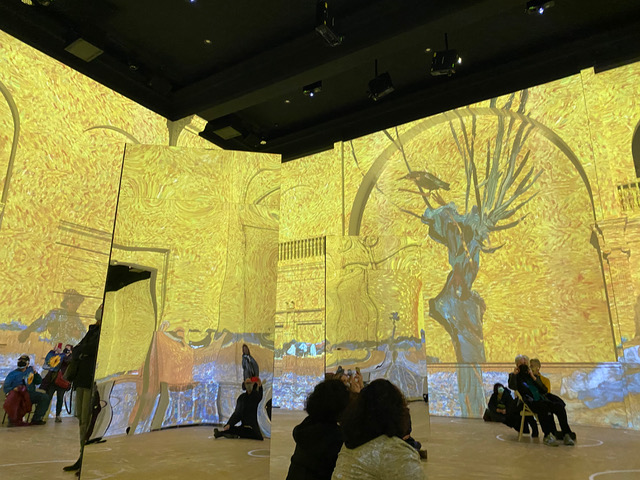 When asked whether the movement of the silhouetted visitors is part of his vision, Siccardi smiles broadly. His professional life in the arts began as a dancer. Pre-COVID pictures of him reveal the clean-shaven, muscular neck and head of someone in his former role. When we talk, he seems to have made peace with COVID hair and a bushy beard. The older pics show him in the sort of boldly sculpted eyeglasses that Italians wear comfortably. During our chat, his pale, blue eyes are bare. They perform broadly with the intensity and humor of his remarks, perhaps to communicate across the language barrier. Siccardi says that his grounding as a dancer was absolutely essential to his initial conceptualization of the exhibition. “People are the central element. Not only can you see the silhouettes of others, but we erected large mirrors on the floor so people can see themselves against the images on the walls. Everyone is included in the installation.” Live theater, he says, is a touchstone. “When you do theater, the public is there. You can see them. They are part of the performance and they give a certain drama to the show. I imagined people moving through this show and that when they moved everything would change with their change in perspective. Now with COVID, the people are forced to sit down in a circle and go slowly from one part of the show to another.” Siccardi has mounted three big Van Gogh exhibitions in the last fifteen years, and this one has been traveling to different cities. It came from Toronto and will launch in New York and at least twelve other American destinations. (And now competes with at least six other production companies plying the United States with their own immersive Van Gogh shows.) Even without COVID people move around a lot, he says, but at a different pace. In other cities, he says, many visitors had come four or five times, “because every time is a different experience.”

Siccardi says that he regards the exhibition spaces not as shells to conquer, but as integral elements of the shows. The Chicago spaces, he adds, were among the most challenging to design to because of the multiple rooms. The rooms were carefully measured and mapped and Siccardi worked on them, virtually, from Rome. “Unfortunately,” he says, “because of COVID, I didn’t make it to Chicago to see the installation. If I had I would probably have made changes because of the space.” But he’s happy with the results. 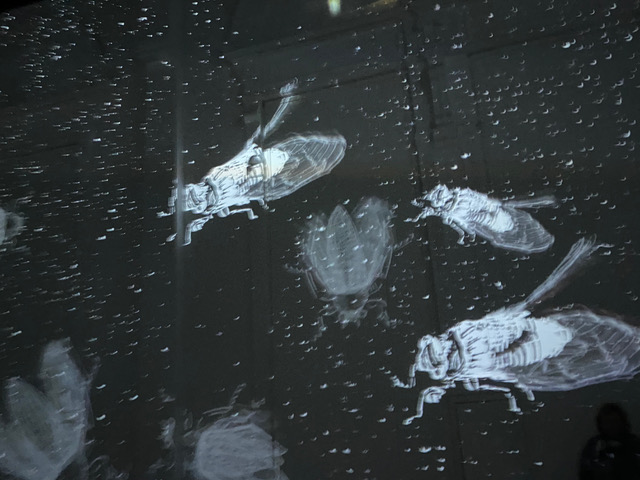 One of the biggest frustrations of the Chicago iteration may be that a visit lasts under an hour; when the clock runs out a new group of ticket holders comes in. Siccardi says that when COVID was not a factor in other places, visitors were allowed to linger all day. There is so much to take in that more time in the immersive spaces makes sense. First there is the sheer number of Van Gogh’s drawings and paintings that are in the show. The show begins with big projections of some of his smallest drawings, the ink renditions of cicadas—also from 1889—rendered atypically with a naturalist’s precision. The drawings exist in real life on a fragment of white drawing paper, and are only about a finger long, but in the show they are displayed as a nightmarish infestation, the bugs big as cars, in white relief against black, crawling over all the walls. Of course, they are cicadas, so they did infest the countryside. But the insects also introduce a perspective that pervades the entire show. Which is to say, Siccardi’s script for the show. Van Gogh was a troubled artist, but hardly an ungoverned one.

For all the energy Van Gogh poured into his work, and for all his vaunted compulsion to reject the world as it is and to visually recast it into the world he felt it be, the artist was in fact always a keen and skilled observer. He saw how the natural world, and also its architecture and objects, were put together. The famous distortions grow out from his talent—albeit unschooled—as a draftsman. The shifting scale of Van Gogh’s work shown one after another in the immersive presentation drives this home. The bugs are followed by a projection of the artist’s “Sower at Sunset” that wraps around the walls of all the rooms, filling the space with startlingly luminous yellows, which to Van Gogh came out of tubes of newly available chemically derived paints, which he could not get enough of (and in a self-destructive episode tried to swallow as poison). 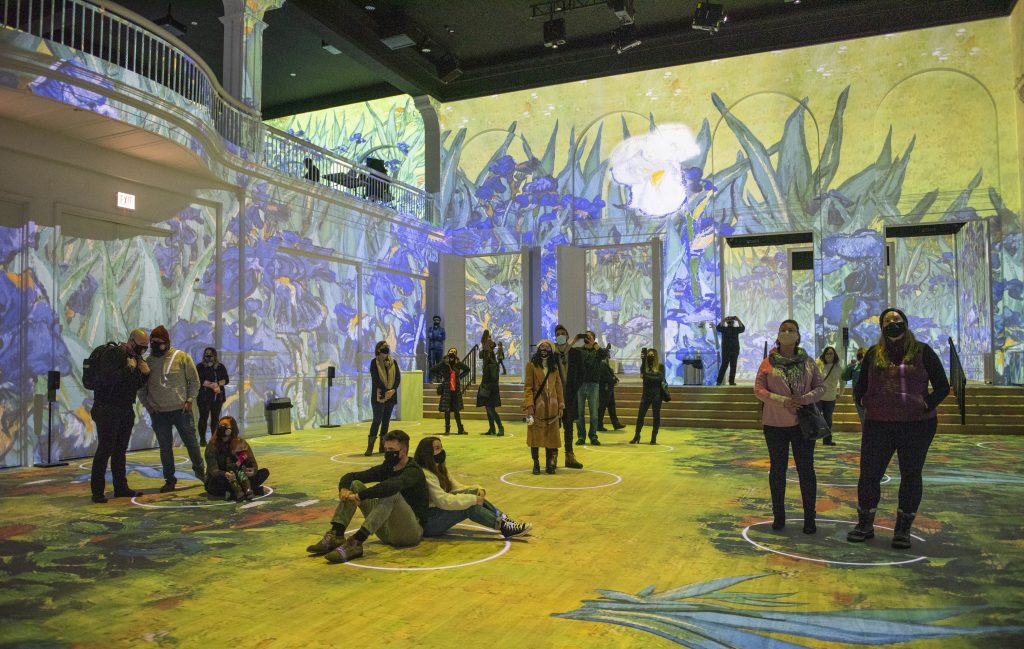 In Siccardi’s presentation, everything in all the images moves. In “Sower,” the wheat stalks and golden sky shimmer, and the sun traverses the walls. Van Gogh painted several scenes at different times of day, and the show animates and combines some painting to create a seamless continuity canvas cannot. A night scene of windmills changes into day, the French countryside fades into café interiors. It’s all to create the drama Siccardi wants for his theater-like experience. The animations are fun. Some are hokey. One transition fades to all-over images of Van Gogh’s famous cigarette-smoking skull. When moving smoke rises from the cigarette, it looks like the old Winston billboard at State and Randolph that blew huge, live smoke rings.

The exhibition also has a soundtrack. A loud one. Some of the music is new, freeform and atmospheric, but it is peppered with a borrowed technopop, bits of the “Kill Bill 2” movie score, Édith Piaf’s “Non, Je Ne Regrette Rien” and an obligatory, perhaps pandering, spin from Mussorgsky’s “Pictures at an Exhibition,” though that composition was written in homage to Russian painter Viktor Alexandrovich Hartmann. For some, the music may work too strongly to dictate how we react to the images. In the hour I spent, however, other attendees told me they enjoyed the more familiar music. A couple sang a muted duet of the Piaf tune to each other, and told me afterward that for them the soaring emotions of the song fit perfectly to the visuals at that moment in the show. 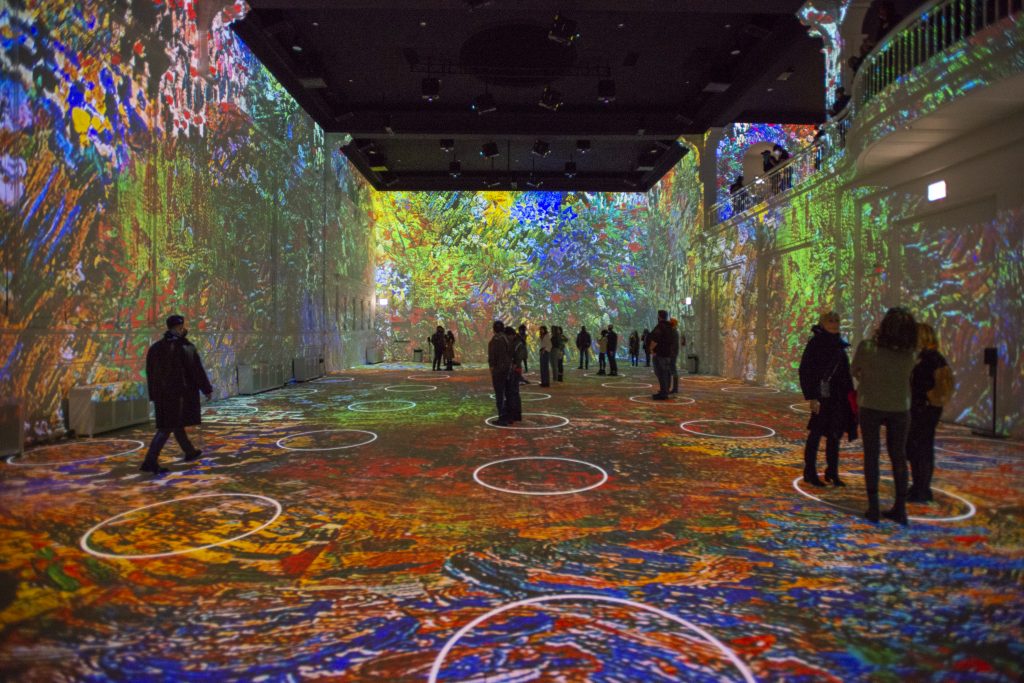 The greatest dramatic effect of the show is in how Siccardi changes our roles in relation to the original work. The immersive experience deconstructs the work so that viewers can see in extreme detail the skill and energy that Van Gogh put into every brush stroke, poke of paint or scrape of the palette knife. In a museum, our view of a painting is confined to the canvas. In “Immersive Van Gogh” we may get closer to how the artist related to his own canvases, throwing—or digging—himself into them so that they were as encompassing—or more encompassing—as the scenes of nature, or the interiors that he painted. The projections at one moment make us feel we are small enough to live inside the brush strokes, as if we have been pushed along by the artist’s physical force, and by the intensity of his elation and anguish that energized his work. Standing beneath a Van Gogh sunflower enlarged two-hundred times its original dimensions we swim like errant specks in its current of color.

As the images change and morph in scale, from the close-up to panoramic scenes, we grow big again, seeing and feeling the breadth of Van Gogh’s real and emotional landscape. The floor beneath becomes a rocky ground Van Gogh painted, and the view wraps around with the cows, crows, farmers, townspeople and friends Van Gogh captured and we find ourselves in their company. Until the scale shifts again. “An immersive show” says Siccardi, “is like what happens to you as a child. As kids, you are always getting kidnapped and brought into another dimension. Everything is incredible. You see things that are bigger than they really are and later in life you wonder how you imagined them so big.” Siccardi says he has a child’s gaze. “I am very young in my perspective.”

The “Immersive Van Gogh Exhibit” is at Lighthouse ArtSpace Chicago, 108 West Germania Place, through September 6. Tickets are $39, available at vangoghchicago.com or at (844)307-4644.