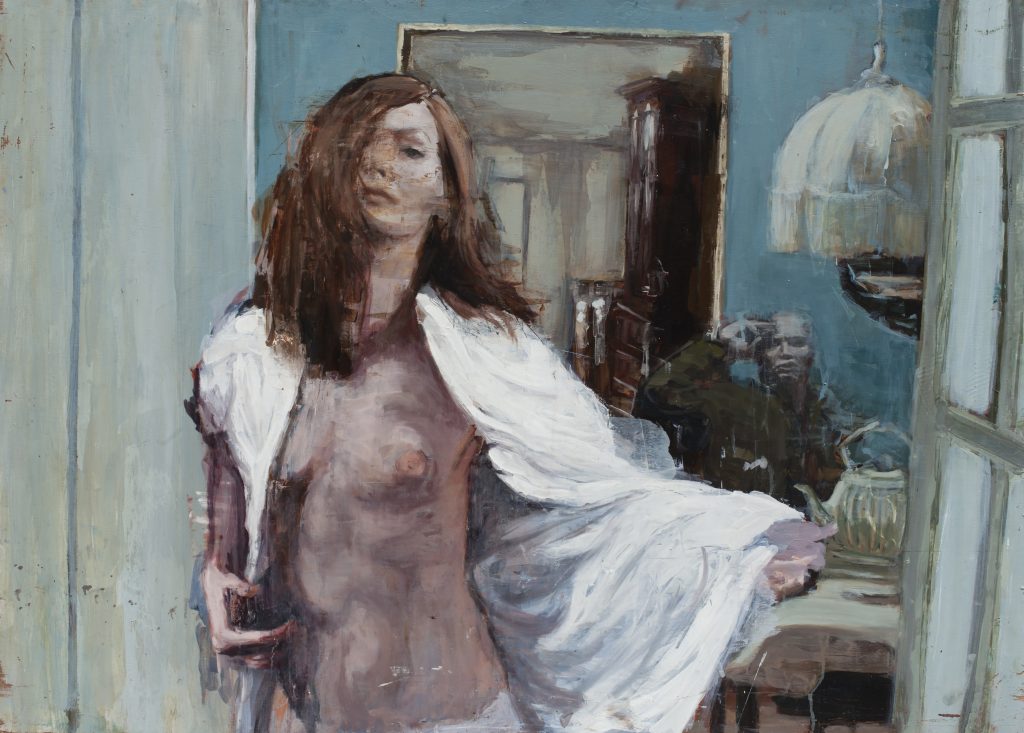 My most recent dissociative experience, or fugue state, occurred last weekend when I walked into 311 West Superior for the first time in a year and found not a single art gallery. There used to be four. That profound sense of loss and disorientation might also accompany a year of shutdown, unemployment, death and the political culmination on January 6. In this timely exhibition of recent painting on that theme, a fugue state is best invoked by the painted digitalizations of Jan Pieter Fokkens. He usually makes upbeat grids of brilliant color. But last year his source material was black-and-white photographs of hydrogen-bomb tests from the 1950s. Intelligent, rational men had gathered in a remote desert to perfect a device to destroy humanity. Fokken’s grainy images are just as dreary, awful and depressing as that subject matter.

But when you think about it, modern life has been a dissociative experience for artists for over a century. Making art about it has become business as usual and the results are often thrilling, enjoyable, and maybe even investment grade. You might have expected that younger artists, millennials, at the threshold of their careers, would express some special dismay from the pandemic, but that is not the case here. Connor Hughes (b. 1993), a hard-edge abstractionist, paints aggressive, dynamic, linear swirls of color you’d expect to find on the backglass of pinball machines. Georgia Hinaris (b. 1993) expertly cobbles vignettes from cheap horror movies together in a way that is more entertaining than horrifying. Nor has the middle generation of artists here appeared to have been derailed by the year of infection, riots and death. Elsa Muñoz (b. 1983) offers quiet, meditative, maybe even therapeutic, nocturnal views of oceans or mysterious fire rings that she has painted many times before. (And by the way, everything she does is delicious).

The work of the oldest artist, Wesley Kimler (b. 1953), has gotten more cheerful over the past twelve months. The world is finally catching up to his dystopian view of it. His paintings are as explosive as ever—with his special knack for making every streak, drip and smear of paint feel both spontaneous and carefully toned, colored, drawn and placed. What’s different now is a sense of humor that has slipped beneath his customary expressions of anger, horror, disgust and dismay. I can’t remember ever smiling at his wall-size semi-figurative pieces—but his four-panel, floor-to-ceiling “Maven” is a raucous caricature of the pink, flabby, dissipated nudes that occasionally stalked the heroic abstract expressions of Willem de Kooning. The thirteen other Kimler paintings in the show are much smaller. Mostly they depict monster-like human heads in what has been a Chicago tradition from Leon Golub, up through Paul Lamantia and Richard Hull. But Kimler’s monsters feel more like Halloween masks than evidence of moral collapse, alienation or depravity. If you read “Kimler’s Complaint,” Jeff Huebner’s probing 1998 profile in the Chicago Reader, you will appreciate what a rare opportunity it is to see so much of this adversarial artist’s work on display. Back then, Kimler felt rejected by a Chicago art world that was becoming ever more conceptual. Today he faces an art world that is all about racial, ethnic and gender identity. Who cares any more about the defiant expressions of an old, white, cisgender male? But his work is also about the mastery of painting, as is this entire exhibit of six local painters.  (Chris Miller)