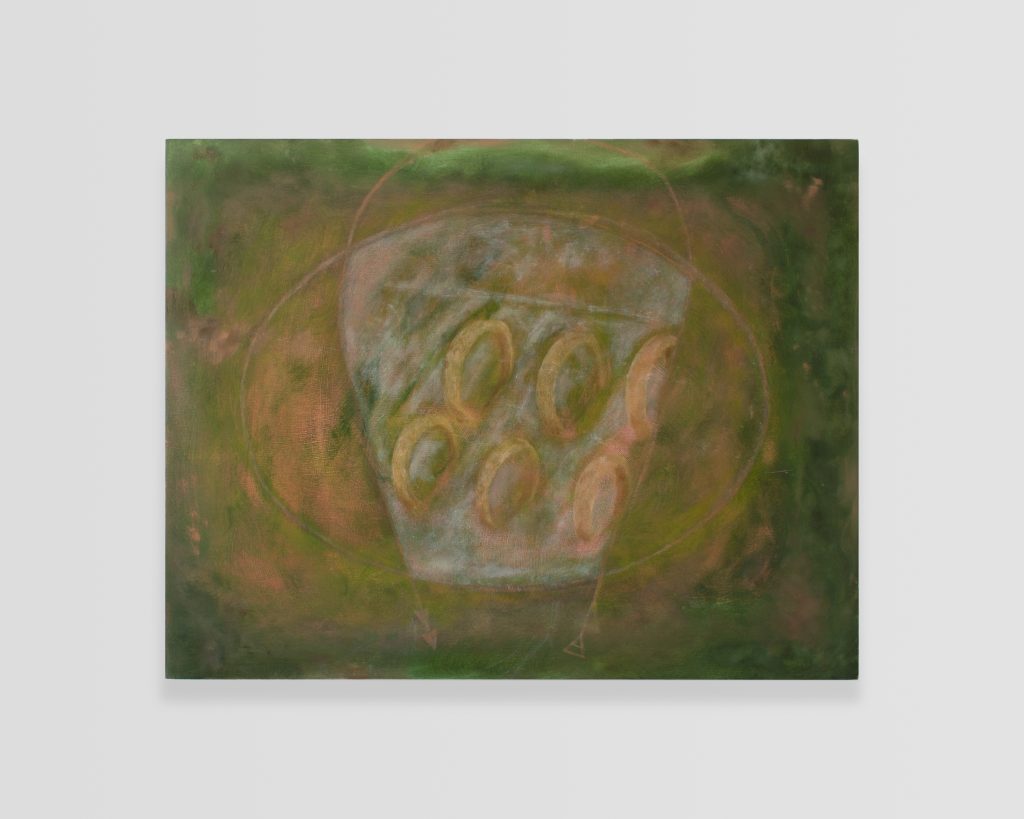 Angela Ziqi Zhang’s paintings aren’t very funny, but she thinks they are. Maybe she’s the only one in on the joke, but if so, it’s a good one.

Her paintings teeter between representation and abstraction. In dialogue with the formal concerns of modernism as well as the semiotic traditions of still life, Zhang’s panels never submit themselves to pure medium or pure illusion. Past work employs irregularly shaped supports, which call attention to the painting’s object-ness; however, the representational value of these forms—the silhouette of a drawn curtain or petite madeleine—display Zhang’s acuity for toying with the audience’s interpretative strategies. In staging a set of objects within a larger object, she artfully mimics the deceit of painting itself: to transport the viewer, through a series of framing strategies, into an illusory plane. 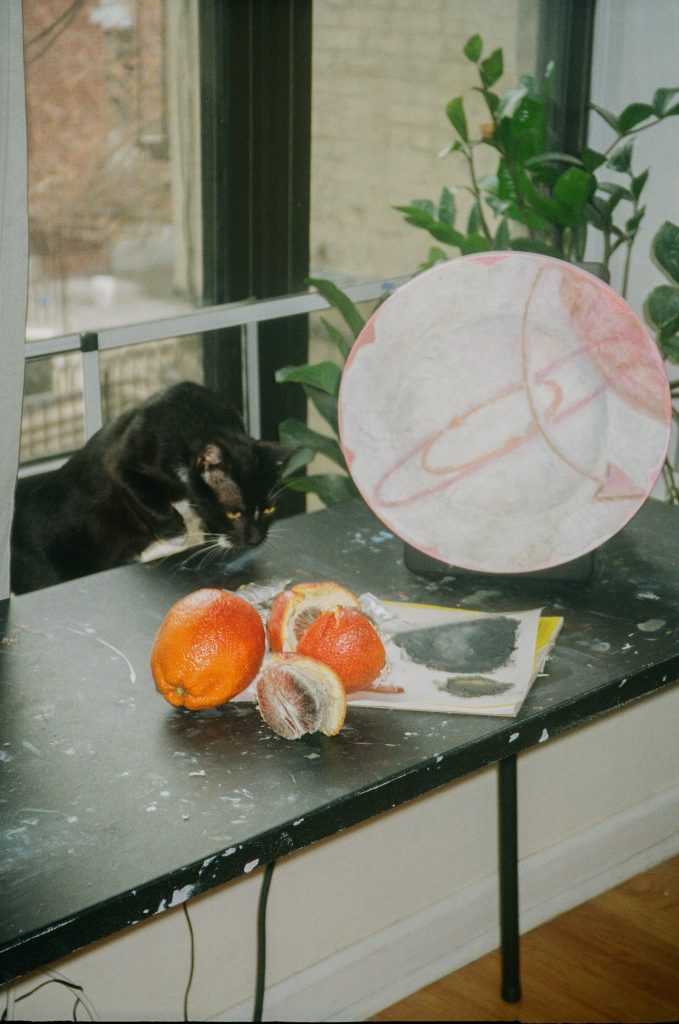 Zhang’s cat Chi Chi next to her painting “#3” in her studio/Photo: Samantha Otero

Based out of Brooklyn since 2017, Zhang began to paint during her time as an undergraduate at the University of Chicago, from which she received a dual degree in economics and visual arts in 2016. For Zhang, there was scant overlap between these disciplines at the time of her study, but the tension between their methodologies and modes of inquiry continues to inform her practice.

Her latest series, comprising work in her first solo exhibition “Fleece Engine,” at Produce Model, is full of potential. Latency simmers beneath the surfaces of objects recalled and imagined: an empty plate; a vacant chair; the hollow of a gold wedding band. Each of these things express a desire to be filled. Zhang’s spare presentation of objects on the precipice of something allows the viewer to imbue these works with their own associations and memories. For Zhang, stuff can stir up a whole set of images remembered and forgotten. Stuff can make you feel something.

Zhang has always been obsessed with stuff: a catch-all for clutter, trash and prized possessions, stuff is best said to be whatever the viewer brings to it. Like many girls born in the nineties, her obsession with material culture began with the act of paging through glossy advertisements in teen magazines—in the spaces between perfume sample inserts and tips on emulating celebrity vibes, she began to cultivate her aesthetic sensibilities. Alongside the shared cultural memory of the 2000s, Zhang’s appraisal of objects are as much informed by her upbringing. The daughter of Chinese immigrants—who bore the hardships of the Cultural Revolution—Zhang understood purchases in terms of their value and the round-the-clock labor it took to procure them. This too informed how she ascribed value—a shiny new car was a worthy purchase but her mother’s trinkets, such as a small porcelain deer, seemed a waste of space.

Her current paintings muddle the viewer’s ability to read objects through the layering of images and diagrams. Symbols such as arrows and circles find their sources in both the mundane and the obscure. Speaking with me recently, Zhang alluded to sources of inspiration from cryptic neon utility markings left by construction workers on sidewalk pavement to complex graphs illustrating the mechanics of desire found in the margins of psychoanalytic theory.

In a rectangular panel, “#6,” six rings emerge from a green ground. In contrast to her other paintings that frame objects in a tight crop, here, the rings are suspended in the clutches of a curved line. To fully grasp the subject you must first decipher the lines as framing devices. The rings and the diagram are divorced from their original context and thus rendered meaningless symbols for the viewer to parse. 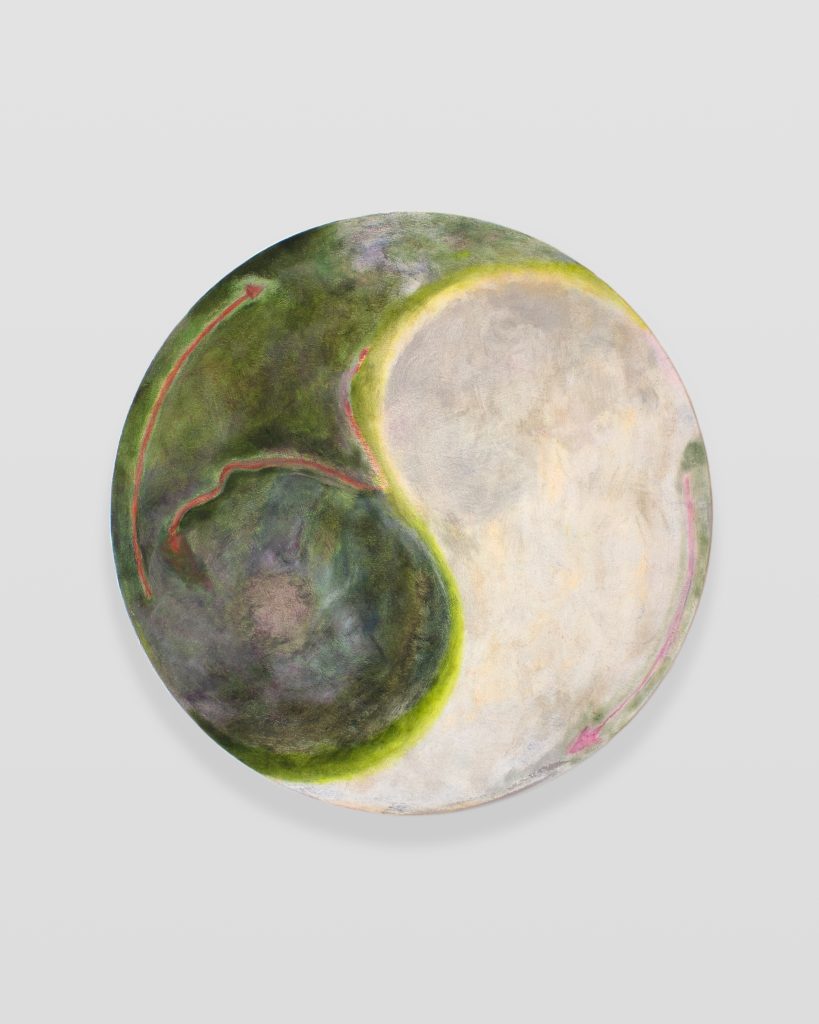 In a small circular painting, “#2,” the symbol is the object. The cosmological signs of yin and yang careen into each other in a swirl of washes. Like a ripple of overlapping palimpsests you can see the generosity of Zhang’s process unfolding in her mark-making. The flirtation of the ground pokes through at the luminous tip of an arrow, as if to say for a fleeting moment that you have arrived.

Zhang is returning to school this fall to begin an MFA in painting and printmaking at the Yale School of Art where, for the first time, she will be able to devote herself to her practice. She’s excited to return to fabrication and to hone skills in woodworking and welding. With access to machines and power tools, she hopes to explore alternatives to standard material supports. 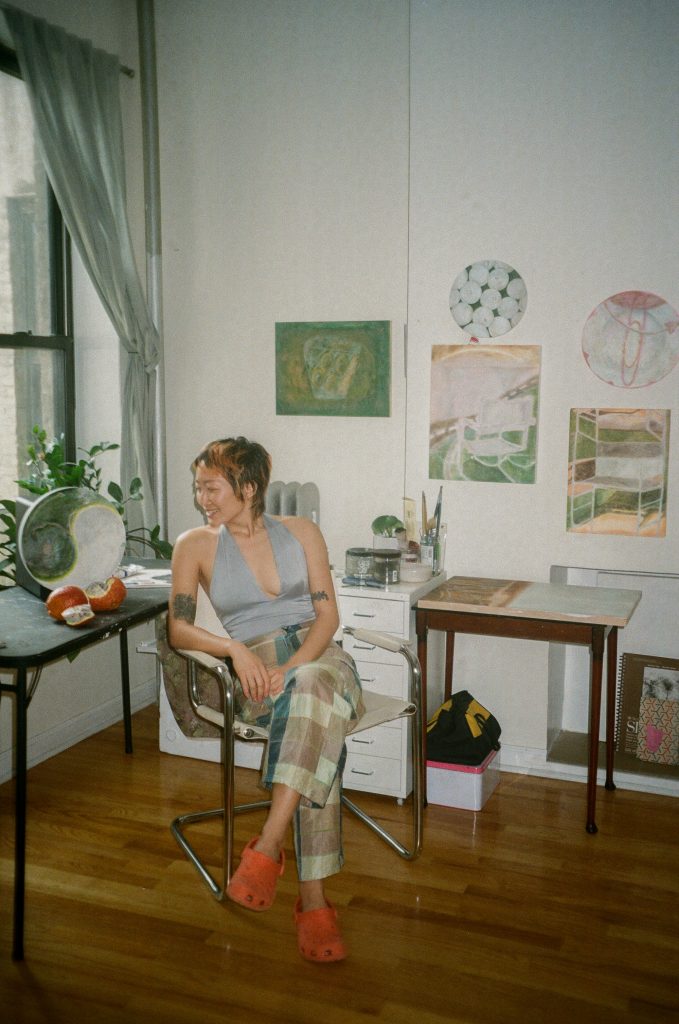 I picture Zhang traveling back to Chicago in the driver’s seat. She’s in control. She looks in her rearview mirror at the reflection of the immediate past unraveling in a slip of asphalt; she looks out of her windshield at the expanse of the immediate future unraveling before her in a stretch of road and sky. She senses the moment. She laughs. (Alexandra Drexelius)