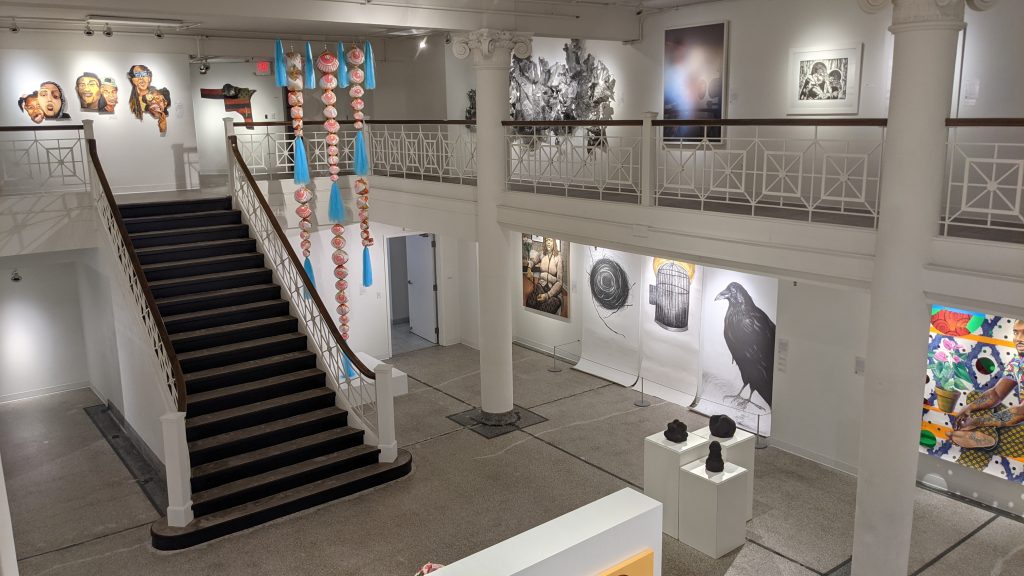 Beyond the borders of the metropolitan art world, among a string of small, industrial towns in central Wisconsin, an experiment in the museum of the future is taking shape.

Artist and curator Tyanna Buie sees our world as a post-George Floyd society. We will never be the same, or, that is the hope. The role of the artist, and the museum, has come to reflect this new reality. In the small but nimble Trout Museum of Art in Appleton, Wisconsin, Buie has gathered sixty-one artists from traditionally marginalized backgrounds and staked a claim for them. “Unraveled. Restructured. Revealed.,” proposes a future for curation, and for empowering artists and their art.

Buie has roots in Chicago, her MFA is from the University of Wisconsin in Madison and she is a professor of printmaking at the College for Creative Studies in Detroit. She is the recipient of the Joan Mitchell Painters & Sculptors grant, as well a fellowship from the Kresge Foundation. Her artwork has been collected by the Milwaukee Art Museum and other institutions. She has exhibited widely in New York, Detroit and Las Vegas.

At the Trout Museum, Buie makes the case that real progress in equity and representation must move beyond simply putting work by diverse artists on the wall. In her curatorial process, she has looked to the artists themselves and asked them to offer their own artistic inclinations and contributions. In addition, she has deconstructed hierarchies in promotion and marketing and in how guests experience the exhibition. 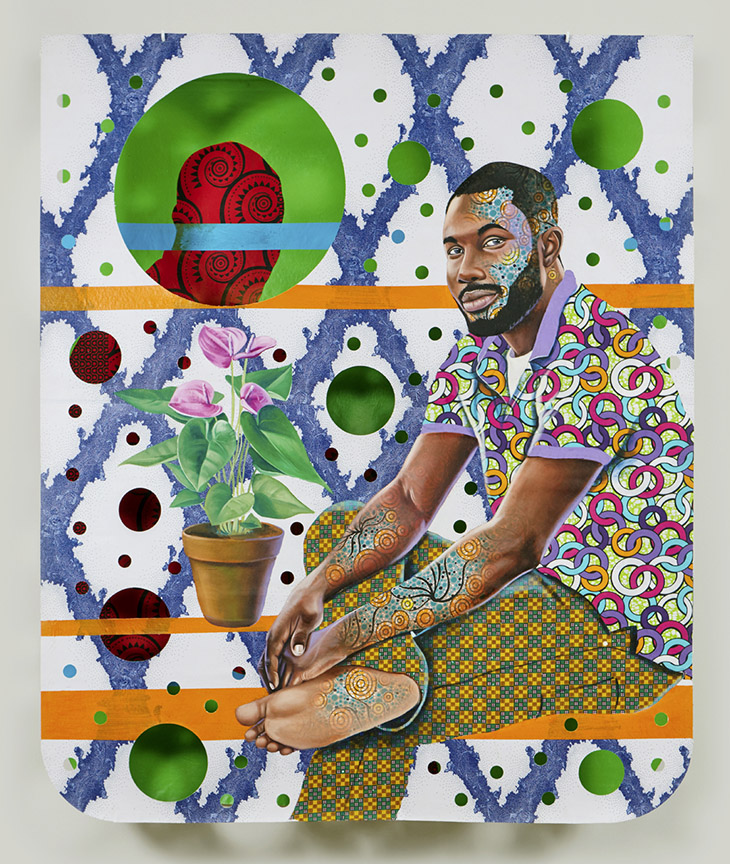 The exhibition, in ethos and methodology, necessarily involves deconstruction. Old methods and forms of the museum world are systematically biased. The permanent collections of nearly every art museum tell historical narratives in unbalanced ways and most are filled with objects tainted by colonialism and racial bias.

Buie has worked to tear down those precedents and empower the artists in the exhibition to tell their own versions of their art and their histories. In finding artists to exhibit, she eschewed problematic categories like “Black” artists or even “artists of color.” She chose instead to include artwork from traditionally marginalized artists, a category inclusive of all artists who have been left out of the discussion. She took time to interview every artist in the exhibition to determine which works the artists would like to contribute and why. This is a complete reversal of normal curatorial practice. It is a communal gathering of creative thought, where the curator takes a step back, allowing artists to reveal themselves without a top-down methodology. This practice cedes control from the curator and puts it in the hands of the artist. It is empowering, but not without risk. The resulting exhibition evolves into an amalgam, growing and changing, at times even in the moment. 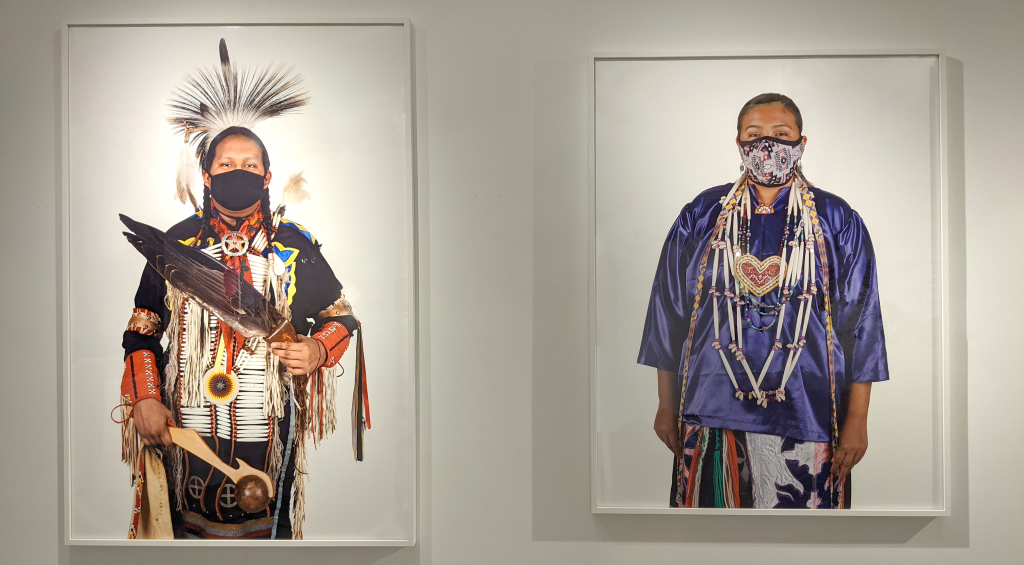 Artists in group exhibitions are usually promoted according to prominence. More famous artists are given top billing and the rest fill in the gaps on marketing materials and promotion. Buie asked the Trout Museum to create a poster for every artist in the exhibition and to market them individually on the website and social media in the lead-up to the opening. Instead of docents describing highlights from the show to visitors, they are asked to lead guests to formal categories, such as textiles, or painting and printmaking.

So how did a small museum in an overwhelmingly white community become the locus for this project? Museum director Cristina Turner said that the nascent Trout Museum (it opened in 2010) has always had in its mission a goal to be inclusive of a full range of voices. Turner described wanting the museum to “show the world for what it is, and fight for what it can be.”

The protests for racial equality and Black lives in the summer of 2020 pulled the Trout into thinking of how it could participate. The museum did not want to speak for others, so they went in search of a curator.

Buie had recently mounted a solo exhibition of her own artwork at nearby Lawrence University, a small liberal arts college. The Trout Museum reached out to Buie about curating and got out of the way, offering as much help as she needed in framing, filming and travel, as well as in new processes for the museum, such as shipping artwork overseas. The museum even delayed the opening date by a week to do additional renovations to the building to make the exhibition more polished. This expansion of duties is no small feat for a small institution, but the Trout Museum has leaned into Buie’s vision, and the result is the largest exhibition the museum has yet mounted.

There is much to see here. Masimba Hwati, a Zimbabwean multimedia artist, has contributed two tintype self-portraits that symmetrically frame a video of a talismanic toy assemblage of a Smurf holding a spear atop a cork bearing the name of the Bank of Zimbabwe. The apparent alter ego is festooned in beads, with pins poking out of the figure’s head and body. Broken combs stand in for angel wings. Hwati states that this grouping is autobiographical fiction as a post-colonial renaissance man, the figure in the video accompanied by fight songs sung at soccer matches. The portraits, the doppelgänger and the rhythmic chants combine in the niche of the gallery to produce a haunting, shamanic transformation.

T.J. Dedeaux-Norris, aka Meka Jean, is a hip-hop artist with an MFA from Yale (she formerly toured with Coolio). She calls herself the Black Cindy Sherman. “Still (A) Life, A Visual Long Play,” is a video that describes the conflicts of art making in academia, appropriation, identity and racial violence. Jean performs with self-conscious hip-hop posturing and expansive sampling of visual and material culture, all mixed liberally into a hypnotic collage of video and song. Jean’s lyrics flip between play, excoriation and taunting:

The video closes with Jean surrounded by chalk drawings memorializing Breonna Taylor and George Floyd, then cuts to footage of the recent Capitol attack, and, with a driving bravado, Jean recounts imagery of racial violence against Black people. She ends with an epithet of rage and pain that retains a humorous gleam—

You playing with me?
Fuck you bitch, and your gentrifying muffin shop, bitch.

The artwork is a profound self-portrait and a scathing cultural critique. It is a revolution, fully formed in thirty minutes. 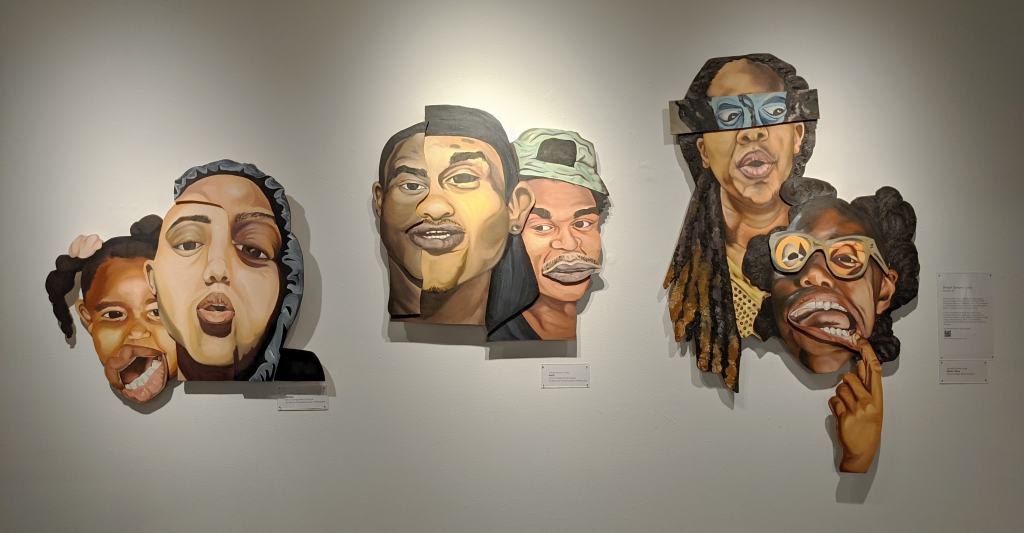 Other artworks include a two-story soft sculpture of cascading hair extensions by Chanel Matsunami Govreau that references supernatural Japanese folklore. “We Sisters Seek the Butterflies amongst the American Stars,” by visionary artist Della Wells is a lyrical and dense collage. Festooned with buttons, glitter and regal blue fabric, it recalls work by Jacob Lawrence, Romare Bearden and the magical qualities of Marc Chagall. Nearby, Phoenix Brown paints an anthropomorphic floral arrangement on ragged patched canvases. Masterful in its grubby cartoonishness, I was reminded of Philip Guston, Laura Owens and B-list animation. Qualeasha Wood also uses cartoon language in her ambiguous, domestic scenes created with tufted wool. Her figures are woven with a dense black color. One of them tries to escape a burning, blue house, which I found comedic and chilling at once.

The exhibition is densely packed, at times to a fault. Many artists bear freshly minted degrees from Cranbrook Academy, Pratt Institute and CalArts, but there are also visionary voices like Romano Johnson and Rosemary Ollison. While Buie was involved in selecting and accepting submissions for the show, she was not active in installing it. This was a missed opportunity. There is plenty of compelling art, but it is often difficult to isolate that work from their neighbors. Sightlines and comparisons between artworks seem pragmatically determined in terms of space as opposed to including more carefully constructed juxtapositions and groupings.

The Trout Museum and this exhibition are not alone. Galleries and museums the world over are trying to wake up to the realities of disparity and systemic racism by highlighting marginalized artists. These actions could be read as too little too late, or as a kind of trendy, of-the-moment response. But responses like these are too cynical. For now, institutions should continue to wrestle with historical conflict and bias, in the world and on their own walls. For now, we can only celebrate the fact that the museum of the future is not just being imagined, but is—perhaps—in the process of being built.

Still, this exhibition left me wanting for clarity and focus.  In trying to include so much artwork in the exhibition, a number of works are simply overshadowed. However, as Buie has communicated, the silos of critical discourse and of hierarchy have been purposely upended here. It would seem that in Buie’s estimation, her project in curation requires permeability, and that these silos be necessarily deconstructed. I’m not sure that she knows what will or should replace them, but perhaps this is the point. The museum of the future might be messy. What a beautiful mess.

“Unraveled. Restructured. Revealed.” is on view at Trout Museum of Art, 111 West College Avenue, Appleton, Wisconsin, through May 23.