“Daphne Fleeing from Apollo,” Master of the Apollo and Daphne Legend, circa 1500, oil, formerly on panel, transferred to canvas. Smart Museum of Art, The University of Chicago, Gift of the Samuel H. Kress Foundation, 1973.45

Two striking spalliere (paintings made to be shown at shoulder height) depict the pursuit of Daphne by Apollo. The first presents her asleep in a rural scene, dress falling open at the thigh where a zagging gold thread strains to keep the folds together. Apollo stands over her, leaning on a staff, head in profile, gaze intent on the recumbent figure. His impending act of predation—we know, as fifteenth-century viewers would have known from their Ovid, that this balmy scene of visual consumption portends attempted rape—is touched off by a moment of calm spectatorship. Apollo is all action in the next panel, chasing Daphne with arm outstretched as her limbs begin to transform into the woody roots of a tree, but the first painting strikes me as the more ominous of the pair. It implicitly enlists us as Apollo’s accomplices. Looking at a painting of a sleeping woman is uncomfortably analogized to sexual assault.

The two paintings pack in most of the themes of this small but dense exhibition (curated by Nora S. Lambert, a colleague of mine at the University of Chicago) examining the interrelated questions of love, lust and loss in the households of early modern Europe. If the tale of Daphne and Apollo exemplifies the issue of male desire, so do the stories of Mars and Venus, Susanna and the Elders, Diana and Actaeon, Ghismonda and Guiscardo, and Tarquin and Lucretia that appear on objects like birth trays, cassoni (marriage chests) and moralizing prints throughout the show. Time and time again, artists show subjects doing censurable or titillating things, usually in ways that reflect self-consciously on what spectators might have wanted from their pictures. In a sixteenth-century painting by Luca Cambiaso, Venus reclines naked with Cupid in her arms; her bed’s silk curtains have been twitched back for our viewing pleasure, much like a print on the opposite wall that shows putti bearing a tent-like canopy over Mars and Venus entwined. 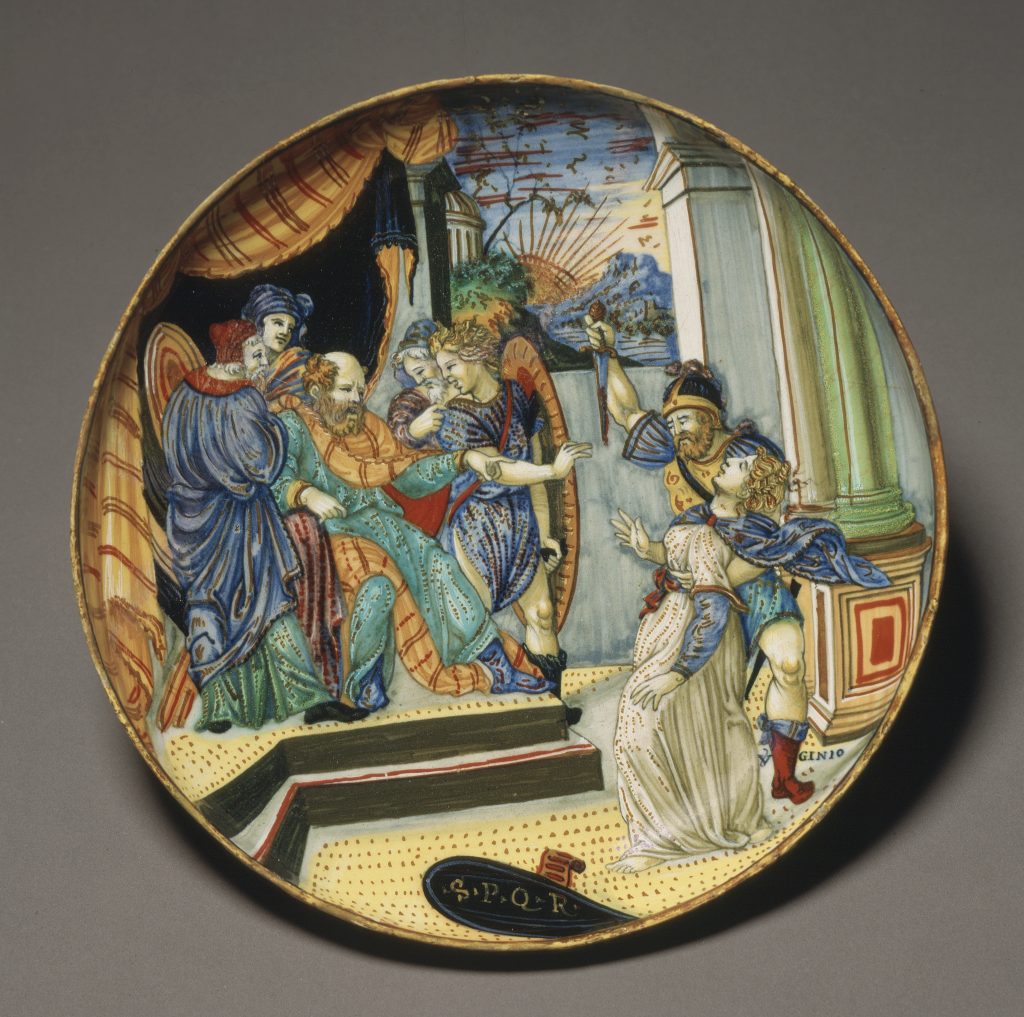 These kinds of pictures played an unusually forceful role in shaping gender relations in the domestic sphere, where many a spalliera was displayed in the bedroom. Early modern women were supposed to be chaste (like Lucretia or Daphne) and obedient. This desideratum was rarely realized in the real world, where women repeatedly pushed back on their notional status as objects of lust and property and so, as Mary Garrard puts it, “because they were not silent, they were silenced.” How much silencing did artworks do? This question has animated much important work in early modern art history over the past few decades, with scholars increasingly demonstrating that we can’t simply equate pictures with patriarchal control.

Think, for example, about how we might characterize Apollo’s gaze and pursuit in negative terms today. He embodies a destructive force, his lust fairly straightforwardly producing a woman’s loss. Daphne’s vegetal transformation in the second panel would, however, have suggested lust’s generative power during a time when artists vigorously claimed the power to create like nature rather than merely recreating nature’s effects. The key relationship was one of virility to sterility rather than consent to violation, a point driven home by the range of ideologically charged scenes painted on birth trays throughout the show. That this would not have been a problem for the artist or the normative Florentine spectator is precisely the point. Hierarchies of gender were still woven into the period’s visual and material culture, but just not quite how a twenty-first century museum visitor might expect.

Alert viewers will notice that despite the exhibition’s claim to cover Renaissance Europe, the bulk of the material is Italian. (A line-up of northern prints treats the theme of mortality, and a few Flemish and French objects round out the show.) The overarching story, too, is an Italian one, not least because many of the object genres on display, like cassoni and birth trays, rarely circulated outside Italy. The “household” on display is similarly circumscribed. Everything in the show would have been made for an elite Christian milieu, during a time when Italian cities sustained significant Jewish populations and questions of lust and loss had pressing material consequences for poorer women. In fifteenth-century Genoa, for example, more than ninety percent of slaves were female and the technique of life insurance was developed to safeguard the interests of male slaveowners who impregnated them. Finally, it’s an overwhelmingly heterosexual narrative; the show might have been enriched by attention to the issues of colonialism, labor, queerness and slavery so productively explored by scholars of early modern Italy.

Nevertheless, the objects are well presented and the wide range of loans—drawing from sixteen collections—means that you leave with a good sense of how the period’s visual culture was saturated with love. Some juxtapositions yield unexpected insights. A large seventeenth-century painting of Venus at Vulcan’s forge by Jan Brueghel the Younger and Hendrick van Balen I is a bit more complicated in its playful take on lust and looking when viewed alongside Carlo Maratti’s portrait of Francesca Gommi Maratti and Giovan Gioseffo dal Sole’s idiosyncratic depiction of Judith with the head of Holofernes. All three pictures show women exercising qualified forms of agency, reflecting more or less ambivalently on their accomplishments. Visualizing the relationship between desire and the winning or losing of what you want, artists elaborated the themes of love and lust in more ways than one. (Luke A. Fidler)

“Love, Lust, and Loss in Renaissance Europe,” at the Smart Museum of Art, 5550 South Greenwood, through June 13.