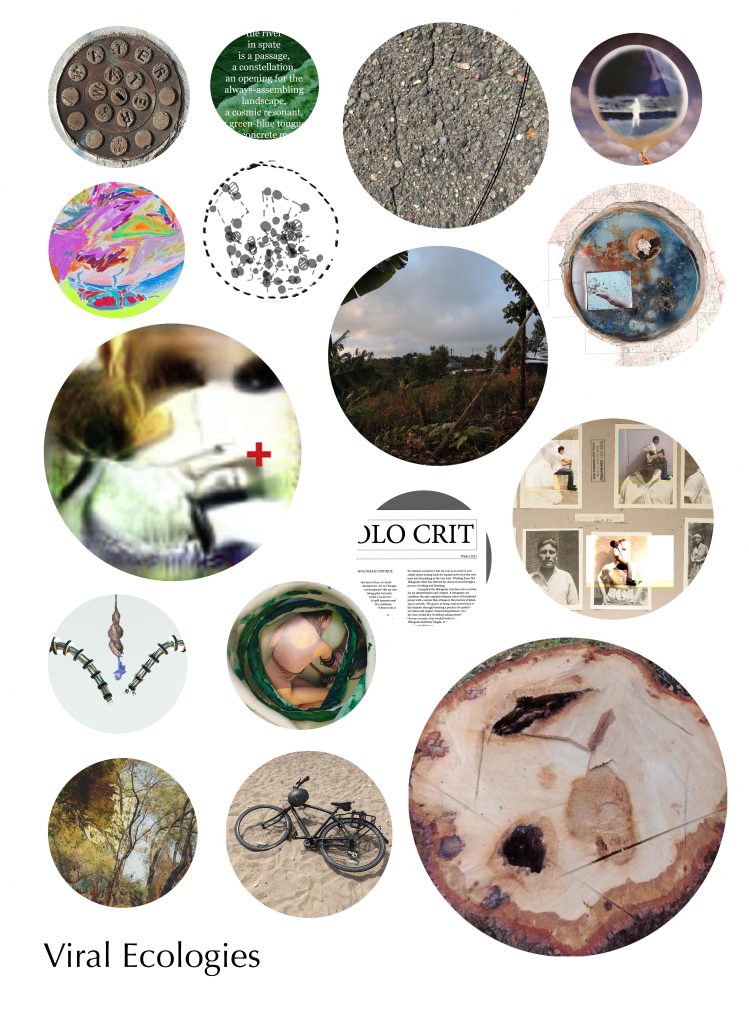 The pandemic has forced us to rethink the relationship between structures and events. The virus exposed the inequality in the systems that connect communities, supply chains and human and non-human populations. Take the food system: massive outbreaks in meatpacking facilities uncovered the vulnerability of our food supply chains and longstanding labor issues in the meat industry; restrictions to travel, partly justified by the pandemic, left families jobless and farms unharvested, leading to shortages in grocery stores across the country. The notion of viral transmission itself—the idea of invisible entities that travel through the very paths that connect our globalized world—seemed to collapse scales, implicating our bodies and those of others, far away in the structures that feed, clothe and entertain us.
A desire to linger with these complexities spurred the creation of Viral Ecologies, a digital publication conceived by artists Saffronia Downing and Rosemary Holliday Hall. “An experiment in emergence,” Downing and Hall describe it as a “curatorial project, a container, a platform, a journal, and a place for collecting and gathering.” In its second issue, the project experiments with the digital publication format, featuring multimedia content that explores the graphic, associative and even spatial possibilities of the webpage—in a sense, performing the interconnectivity they seek to unveil in the world. I spoke with the founders to learn about their collaboration and vision. 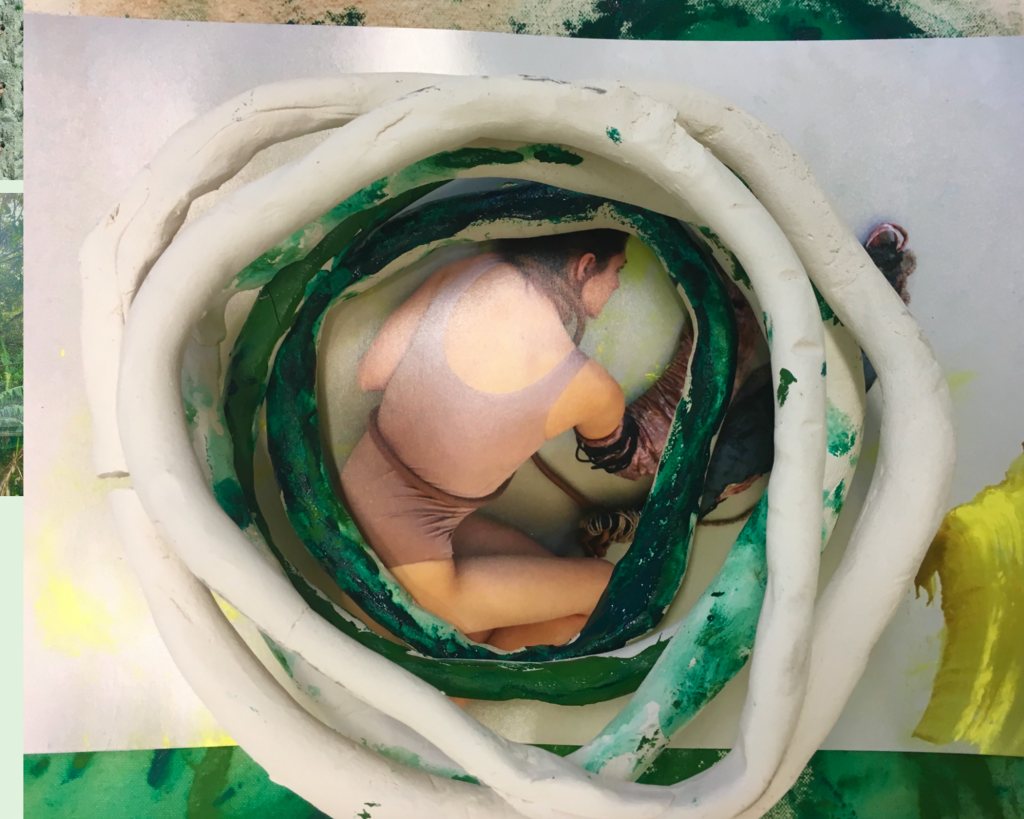 The idea for the project came about during a walk in the park in March 2020, as Downing and Hall discussed the pandemic’s systemic roots and the conditions that conceal or reveal social and material structures. Both artists’ practices are informed by ecological and infrastructural ways of thinking—or, better, ways of noticing. Downing’s installations and sculptures combine new, found and foraged materials with a special attention paid to the encounter of human-made and non-human environments. In a recent series of works (“Cloverstack,” 2020), Downing used plaster and beach sand to cast shapes found in highway interchanges—cloverleaf, cloverstack, windmill and diamond—creating an “earthly symbology” that plays with their allusions to natural forms and their earth-shaping impact. Hall’s multimedia installation practice looks closely at shapes, textures and transformations in non-human nature, opening up dialogue with the biological and geophysical sciences. The installation “River of Shadows, Liquidation” (2020), resulting from a yearlong collaboration with artists and scientists at Glass Curtain Gallery (“Third Coast Disrupted: Artists + Scientists on Climate”), speculated about the effect of increased precipitation in Chicago through delicate porcelain casts of dead plants collected from its streets and a video exploring the world-making property of water against the backdrop of a city viewed from above. 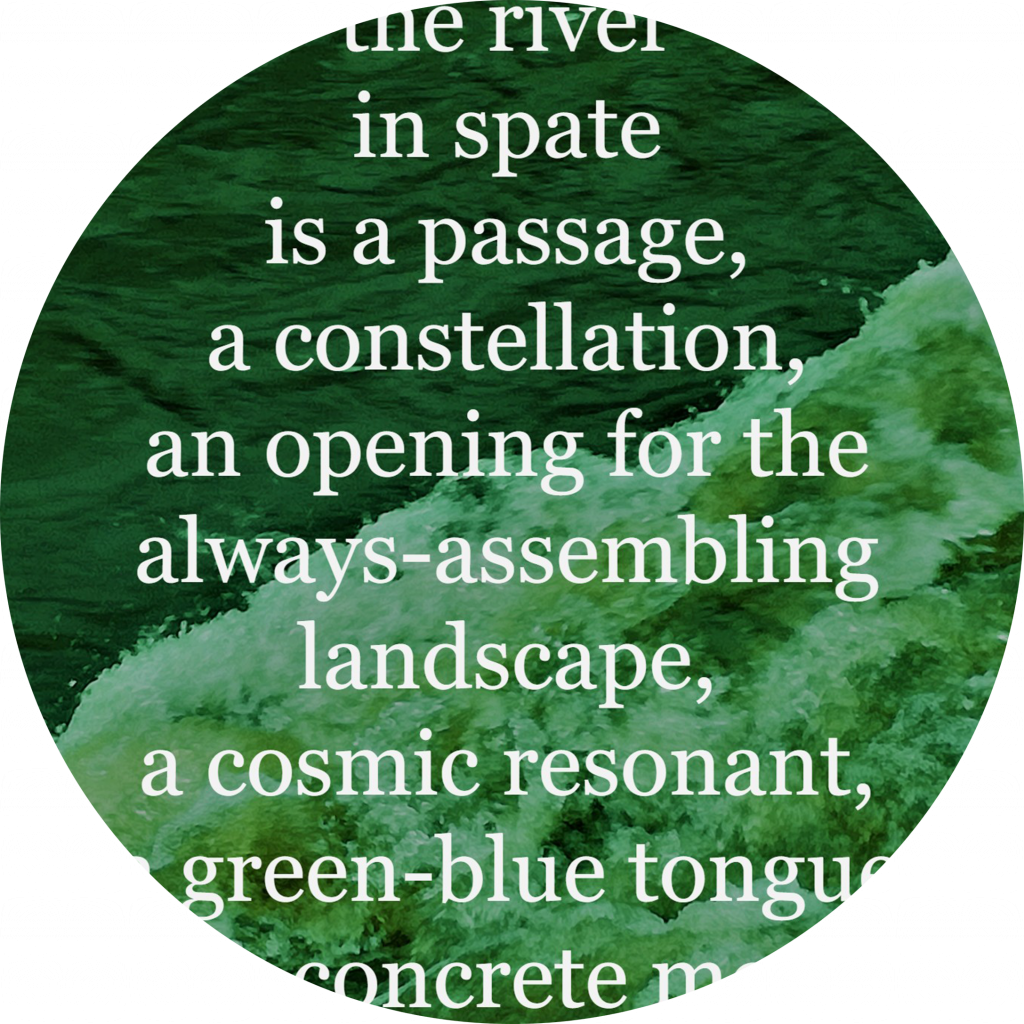 “In Spate / a river is a passage” by India Boxall

The artists started meeting up and researching together two years ago as graduate students at SAIC. “We would get together and go on walks and explore. We dug clay around Chicago, we talked about ideas, and explored prairie preserves,” Downing says. “We wanted to collaborate for a long time and talked about different projects.” Viral Ecologies emerged from this shared sensibility, transforming the artists’ ongoing conversations into a space for broader contributions.

The publication launched in September 2020, with that first issue describing the relationship between bodies and landscapes, whether physical, mental or metaphorical. Downing and Hall reached out to artists whose work they saw as revealing facets of “everyday ecology”: encounters with the economic and ecological entanglements in our immediate environment. Contributions, mostly from Chicago, included a sound essay, a word game, short stories, landscape poems, a video and a personal essay. 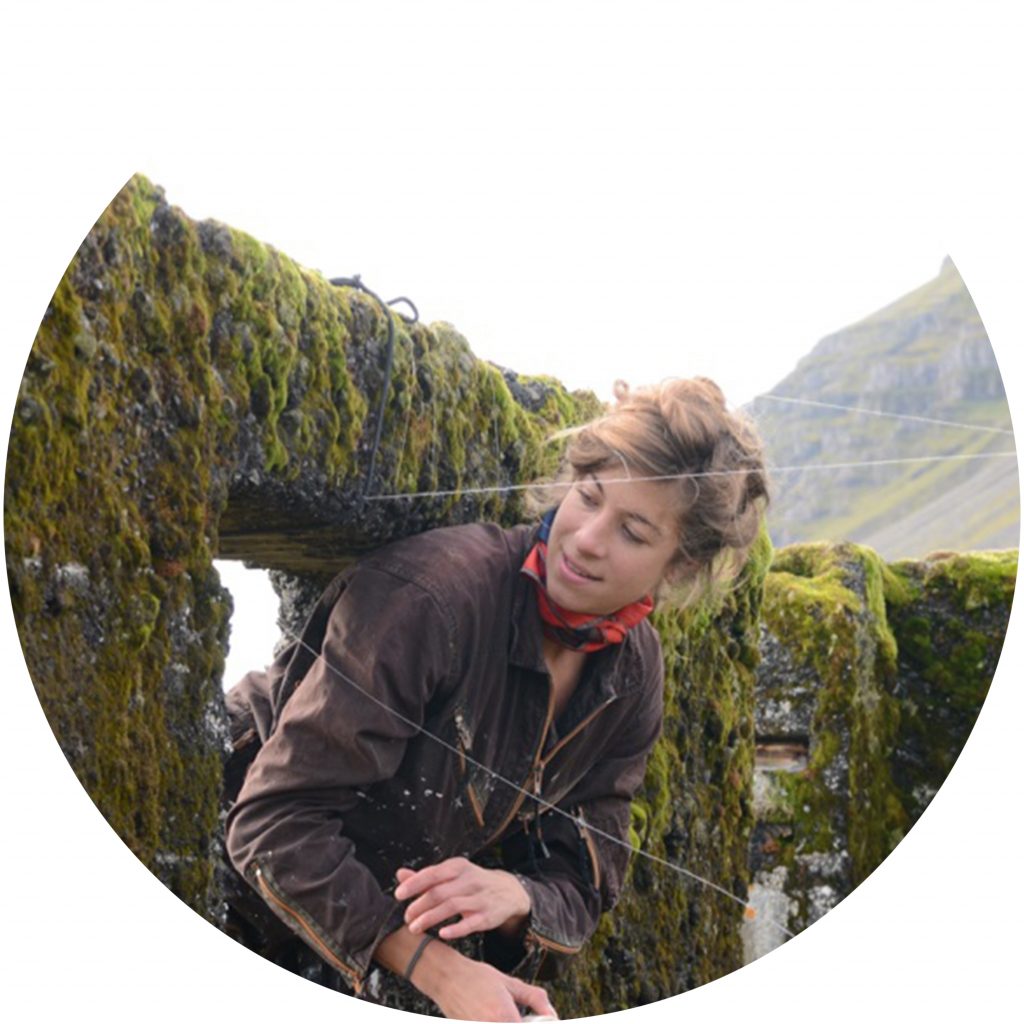 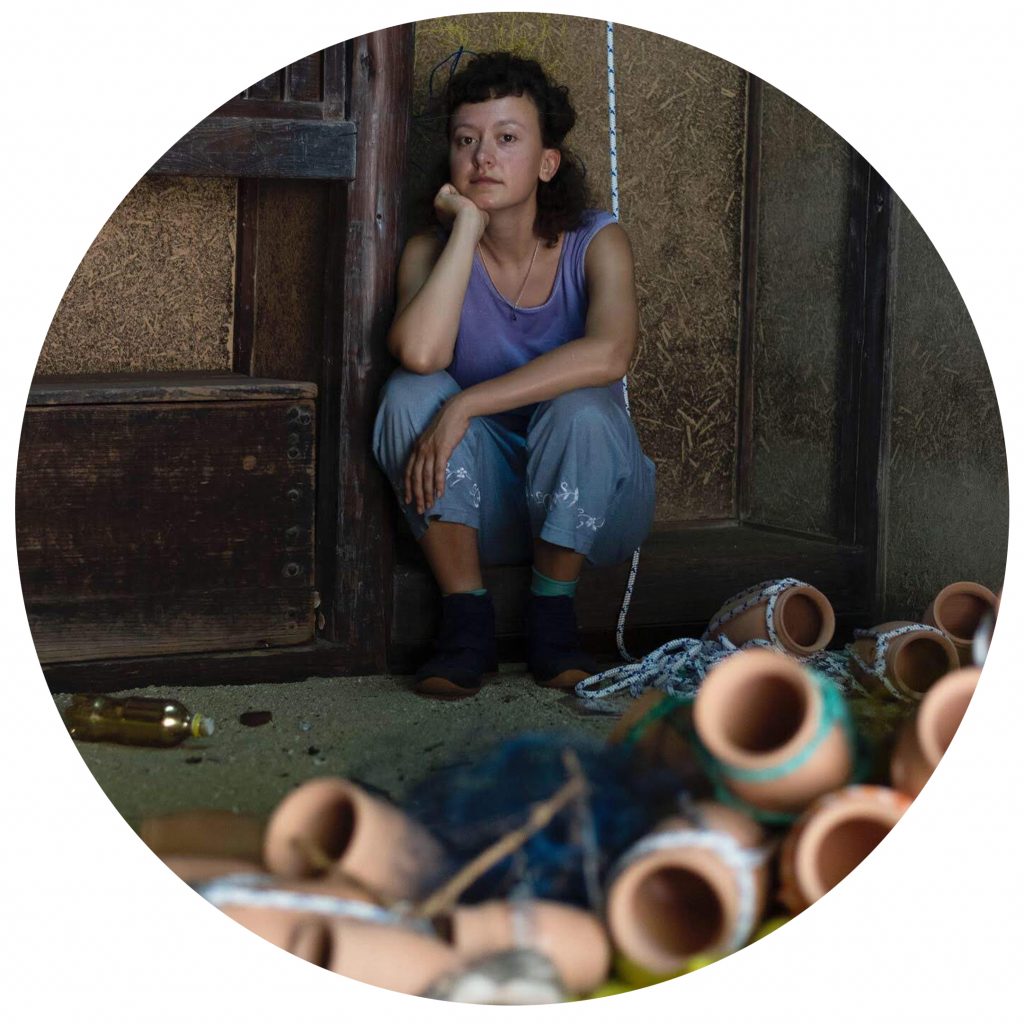 The second issue, published on March 8—already with some distance from the stupefaction of the pandemic’s early days—considers the idea of emergence, or “the way small actions create complex systems.” Coming out a year after the outbreak in the United States, this issue feels like an inflection point, a test of the publication’s durability beyond the viral moment. It also investigates the platform’s very premise as an “experiment in emergence.” The editors put forward an open call this time, attracting a group of artists, researchers and writers—more often, a combination of the three—from Chicago, Glasgow, Mexico City and New Mexico. Issue two pushes the website interface further: text, video, image and sound occupy the full spread of the page. India Boxall’s “In Spate / a river is a passage” takes it the furthest, transforming the site into a navigable sound- and image-scape that allows visitors to navigate the space of the page to discover content. Even more modest interventions, like Jimena García Álvarez-Buylla’s video essays “Emergence (The Way and The Woods)” and Monika Plioplyte’s “Visual Notebook” succeed in manipulating the platform to create more intimate or open environments, as needed. The more exploratory media environment is a strength of this digital container, as it finds its space between online exhibition space and publication. The support, shaped by the contributors with each addition, reflects and extends the curatorial approach to emergence, transmission, systems and ecology.

Viral Ecologies is the perfect meeting place for two growing networks of artists: those investigating human and non-human ecological entanglements and those interested in digital media environments as platforms for collaboration and material innovation. They find peers in the Midwest with Deep Time Chicago’s ample network of practitioners and recall critical speculative practices emerging at the intersection of art and architecture, anthropology, economics and climate science. These vibrant and urgent practices, often informed by research and interested in creating dialogue more than producing objects, are often an uncomfortable fit for traditional exhibition. Galleries, museums and biennials interested in those practices often resort to online platforms and public programming as a way to expand traditional displays. Viral Ecologies proposes a promising digital-born home for artists-researchers, flexible enough to accommodate practices that are still finding their form and language. This openness is at the core of Downing and Hall’s vision for the project: “We’re excited to see what forms emerge from this project over time. Our contributors have brought a lot of ideas to the table that we couldn’t have imagined on our own.” I look forward to seeing where this spirit of collaboration, steered by a curious and lucid curatorial eye, can take this project. (Cecília Resende Santos)

Read the latest issue at viralecologies.us.