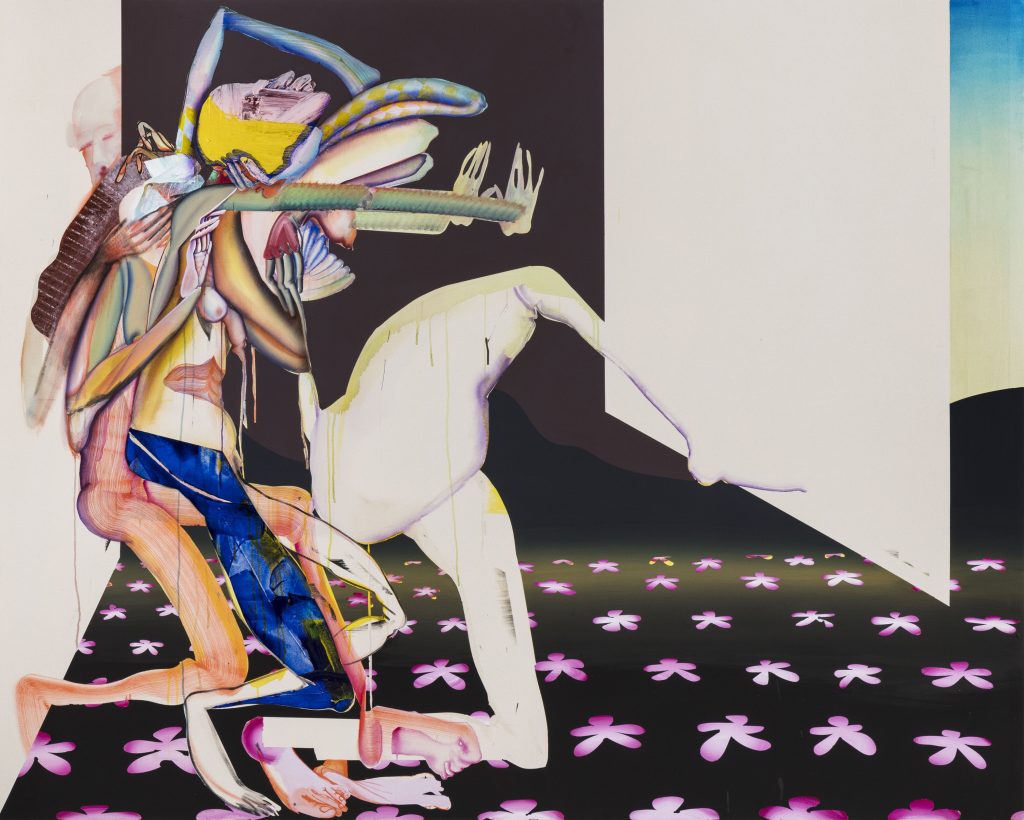 The paintings of Christina Quarles are all about boundaries: the boundary as threshold, as surface, as canvas, as skin. Largely focused on the figure—or perhaps more accurately, the body—Quarles twists and contorts them as they reach out, wrapping themselves around one another until the multiple bodies appear as one. In her piece “Peer Amid (Peered Amidst),” we see multiple heads and arms attached to bodies that are stacked together, obscuring the individual figures’ borders until we cannot tell where one person ends and the other begins. This is one of the borders Quarles complicates: the body, the skin. Not only does the artist intricately render her figures as if they are molded together, but she also modifies the skin itself. In a way akin to the work of Francis Bacon, the skin in Quarles’ paintings alternate from dense to opaque to completely absent, with all levels of translucency present throughout. The textures that are formed through numerous ways of applying paint to canvas create a wide variety of surfaces, all in one body. Washes of acrylic paint create dripping flesh that often appears as muscular tissue. In “Laid Down Beside Yew,” we see what looks like tendons in a leg, while rib-like shapes show through in the chest. What’s more, in that same body, paint is missing, leaving us with nothing but subtle outlines and bare canvas; ghostlike remnants of the body. The artist’s phenomenal use of paint informs her bodies in ways that leave them fused together yet also disappearing. This use of opacity complicates the skin, as it becomes both solid and see-through. The barrier of the skin is broken; it is made fictitious and imaginary, leaving the bodies with nothing to hold them back from becoming one. 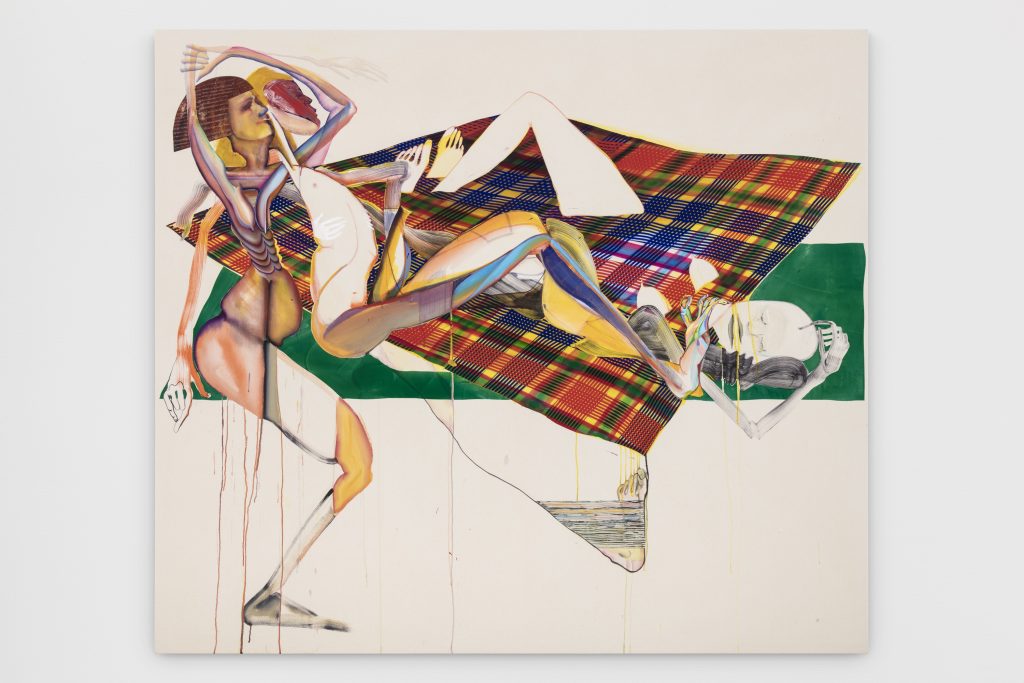 Christina Quarles, “Laid Down Beside Yew,” 2019/Courtesy of the artist, Regen Projects and Pilar Corrias Gallery

The body, or rather, the skin, is not the only barrier that Quarles breaks down in her paintings. The more obvious thresholds are the flat, square planes of color that appear throughout her works in the show. These sometimes exist as flat blocks of pattern, like in “When It’ll Dawn on Us,” while other times they act as floating planes that dissect the figures, as in “Never Believe It’s Not So (Never Believe/ It’s Not So).” The latter piece is the most ambitious work in the exhibition, as it consists of three large canvases, each wrapped around a wall in the middle of a gallery. As one of the highlights of the show, it depicts three flat planes that are used as a device to obscure a boundary once more. In the middle section of the painting, a square shape floats with several limbs coming out of its surface. It is as if this solid square allows bodies to pass through it, yet it also functions as a window, cutting off our view of part of the body. The boundary is broken again. Like the skin of the figures, these planes of color are sometimes transparent and sometimes as solid as the ground we walk upon. Similarly to the changing opacities of skin, sometimes bodies are permitted to pass through the planes, while other times they are not.

The skin is a surface, a threshold, a border. Quarles cleverly merges the function of the surface of the skin with the surface of the canvas by oftentimes leaving them both bare. The raw, beige canvas is left exposed within the bodies of the figures, but as a flat, floating plane. Throughout the exhibition, our attention is drawn to these places left bare, leaving us to determine if the raw canvas is the surface of the skin, the boundary of the square plane or merely the background of the piece. As the largest presentation of the artist’s work to date, there is much to examine, absorb and tease out throughout the show. Christina Quarles’ distinct and intricate use of paint combined with her complicated and impressive fusion of boundaries compels the viewer to question their own boundaries, whether they are self-imposed, artificially constructed or simply imaginary. (Christina Nafziger)